Tonka and I hadn’t been out on the trails for awhile because we’d been dealing with his SI issues. But, it was time to get him using that rear end and the vet said that easy hills out in the woods would be good for him, so last week, off we went.

We were in for a surprise at the water crossing. This is on conservation land, and the trails committee had come through and moved the bridge! It now rests securely on some flat rocks, BUT, it was moved in front of a large bush, so that only people could get onto it. 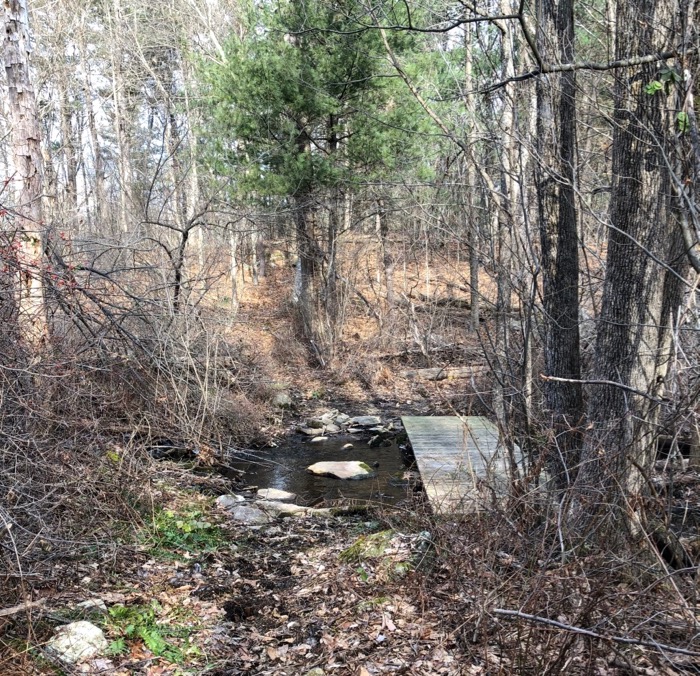 The other surprise was, what with all of the rain, the trickle of water had become a flowing stream. There was also mud.

Back in October, we’d worked through his worries about this section of the trail, (read more about that in this post) but the scene was now different. Tonka stopped. I let him. We stood there, assessing the situation. His conclusion was that we should go back to the barn. He backed up a step. I got off. That immediately made him feel more secure. (I wrote about When To Get Off in this post.) I led Tonka up to the bridge. We looked some more. 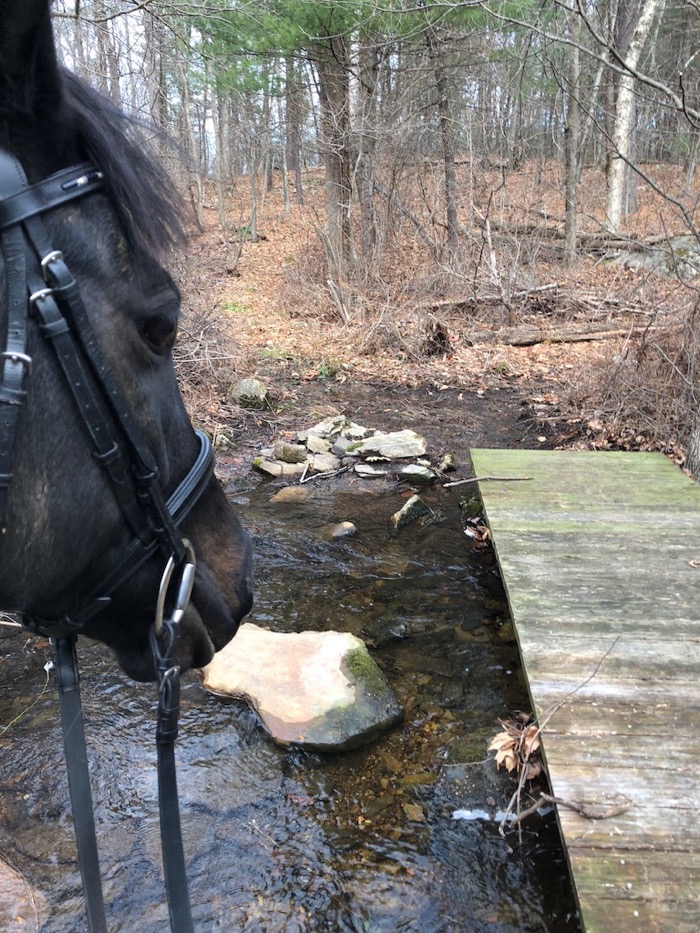 I thought that I could walk on the bridge, while leading him through the water.

Tonka said that he thought I was crazy. It was below freezing. There was ice in the stream. 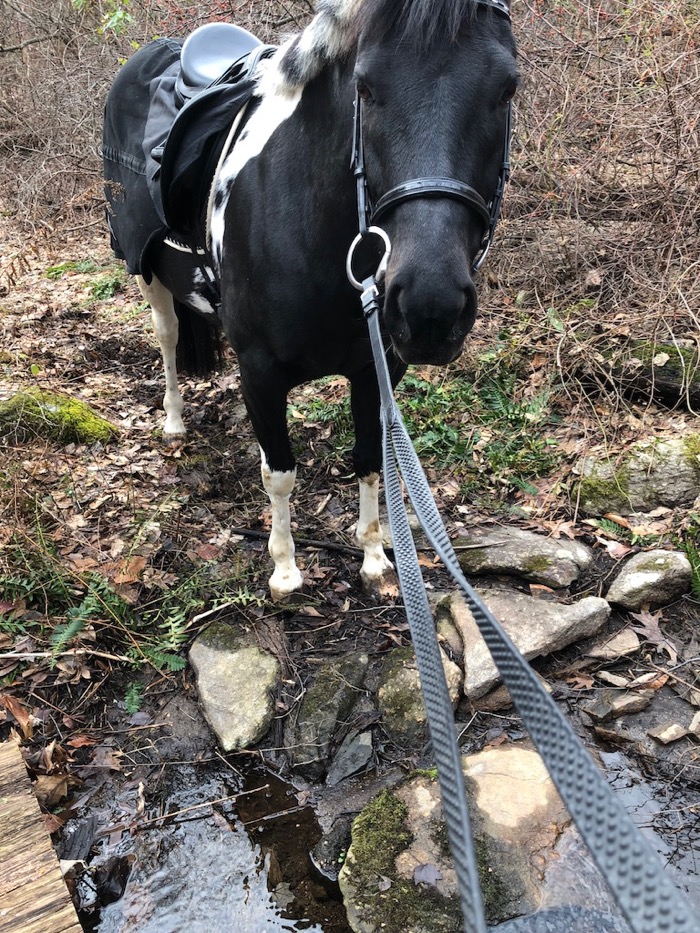 I said I thought he could do it.

He said that this was as far as he was going. The last, safe rock. 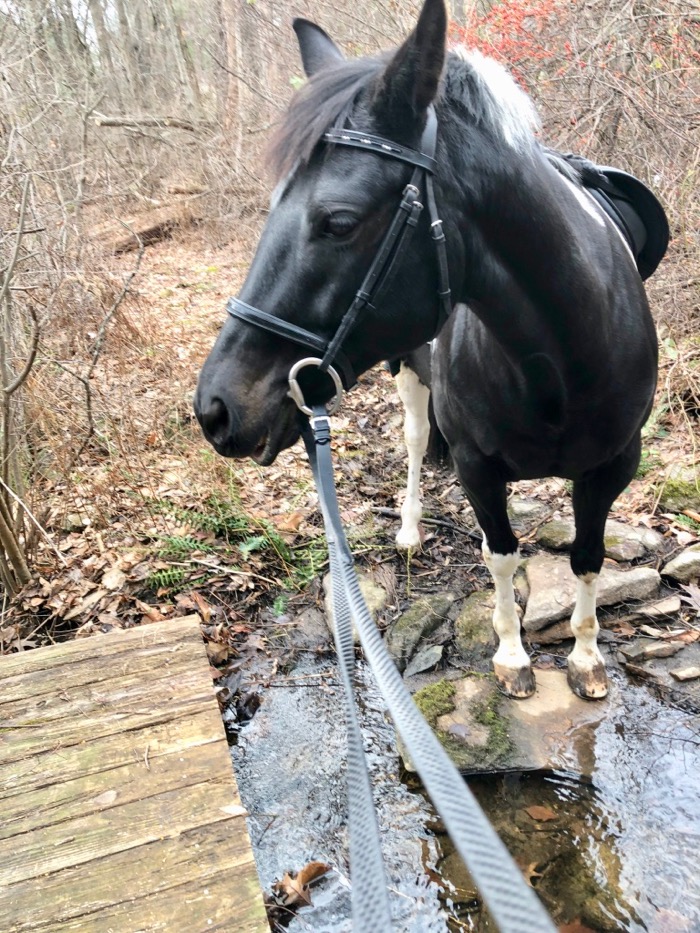 I decided that his judgement was better than mine, we turned around, I got on, and we walked back home.

Later that week, I returned by myself with loppers, and cleared a path to the bridge. 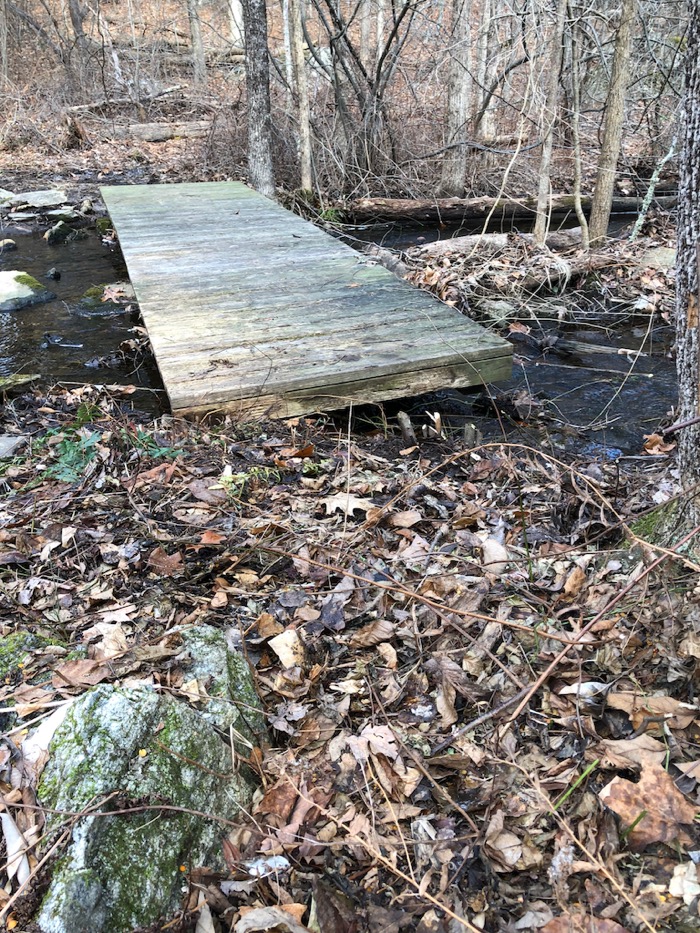 Although the edge of the bridge looks precarious, it’s sturdy and immobile.

I went back to the barn, tacked up Tonka, and rode down. As soon as we got in sight of the bridge, Tonka tensed. I got off, gave him a peppermint, and led him to the water. He looked. I walked confidently onto the bridge, and let him know that instead of walking through the water, that the bridge was again open to horses. He thought about it, decided that this time I was asking him something reasonable, and walked over behind me. I got on, gave Tonka a peppermint, and we continued down the trail, which loops in a big circle and comes right back to this bridge, which he walked on and over, and we went back home.

Today Tonka and I went back to the bridge. Once again, it looked different. There were platters of white ice in the stream and in the mud. Once again I got off. I led him right over the bridge. Got on, and we continued on our way.

After about a ten minute walk in the woods, we were back at that stream. It’s not the safest looking bridge, especially from that far side. It’s a mucky approach and there’s a dark gaping space under it. Troll habitat. I let Tonka stop and assess the situation, and then I asked him to walk on. Tonka, having been hand-walked over this, and having been ridden over it in other conditions, was wary, but had experience with it being safe, and that crossing it was rewarding. I stayed in the saddle, squeezed his sides with my legs to let him know that forward and over was the plan, and told him what a brave horse he is. 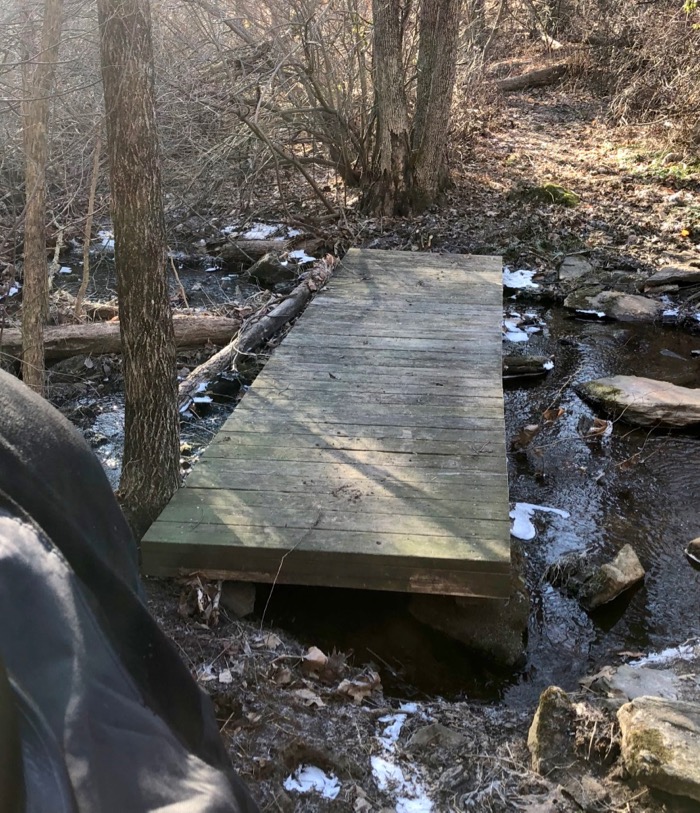 Tonka thoughtfully decided where to place his hooves, (he certainly knew better than me!) eased himself carefully onto the bridge, walked right down the middle, with a steady clip clop, and then stepped off onto solid ground. I said whoa, and he stopped and waited for me to unwrap a peppermint. (I taught this behavior. Here’s how.) And then we headed home. 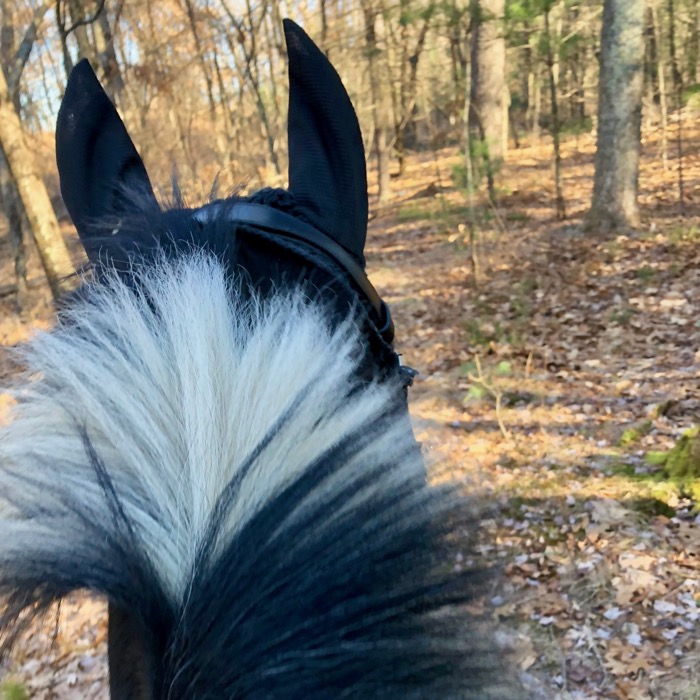 If this were a fable about crossing a troll bridge (which it is, really) I’d say that there’s a moral to the story. Actually, there are several lessons to take-away:

UPDATE: Two weeks after writing this post, we were back at the bridge. This time, Tonka confidently walked over and continued on his way. No peppermints needed – walking in the woods makes him happy.

11 thoughts on “Crossing a Troll Bridge”