Those of you who have been following me here know that Tonka has had a persistent front left lameness. Over the last few years he’d have a twinge now and then, but it would resolve quickly. Last August when Tonka came up mildly lame on his left front I decided to look into it. In October an MRI was done – which is an expensive and possibly complicated procedure for a horse as it requires full anesthesia. The results matched the mild lameness. A little bit of tendon and ligament strain and some coffin joint inflammation. Rest and a course of IRAP injections were prescribed. But the rehab didn’t go as planned. Tonka had a reaction to the IRAP, became severely lame, and needed to have his joint flushed. While recovering from that, and still on stall rest (with a little walking and hand-grazing) his collateral ligament issue became more severe and he somehow got an avulsion fracture of the coffin bone. After a couple of months, that healed fine (as seen on ultrasound and x-rays) but Tonka remained seriously lame, which surprised his veterinary team. In February, back he went for another MRI. This one showed some serious arthritis in the joint between the coffin bone and pastern bone. This wasn’t evident in the first MRI. Somehow his joint health had deteriorated in just a couple of months. He was injected with Arthramid, a gel which would give him cushioning and more fluid in the affected area. The prognosis was optimistic. But, once again, treatment didn’t go according to plan. Tonka remained severely lame.

Last week I took Tonk back to the veterinary hospital. Despite his hoof hurting, and having been on stall rest for months, he got on the trailer with good cheer, and upon arrival walked into this now home-away-from-home in a pleasant frame of mind. Unlike me, who with great worry, saw him off. 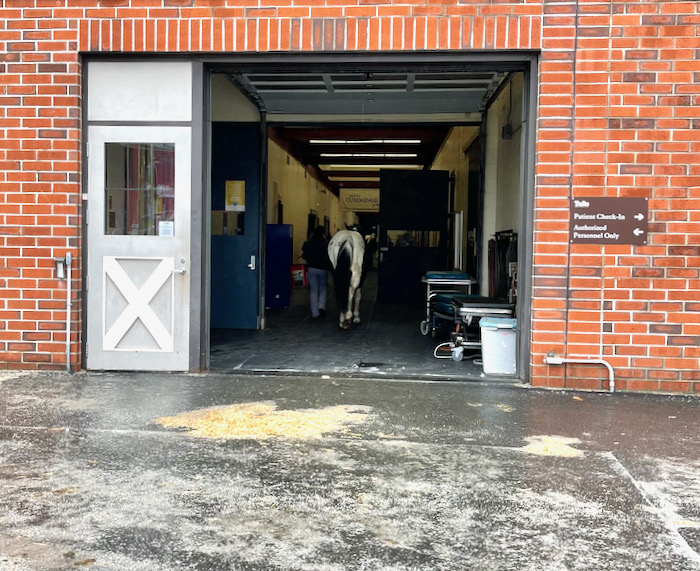 The plan was to do a neurectomy, which is when a section of the nerve that feeds the affected joint is cut away and removed. In theory (and usually in practice) this means that the horse can’t feel their hoof, which means they can’t feel pain. Most horses adjust just fine to the lack of sensation in a hoof and can get back to a fairly normal life.

Of course, there’s a twist here in Tonka’s story. The surgery itself went very well. However, the veterinary team identified one more area in the hoof that is compromised by severe arthritis. The joint between the coffin bone and navicular bone. That one is fed by a different nerve, and so despite the neurectomy, Tonka might still have pain in his hoof. Arthramid was injected there, to give him relief. We won’t know whether that will work for about a month.

In the meanwhile, after a stay of several nights at Tufts, Tonka walked right back onto the trailer, in good cheer and with far more optimism than me. 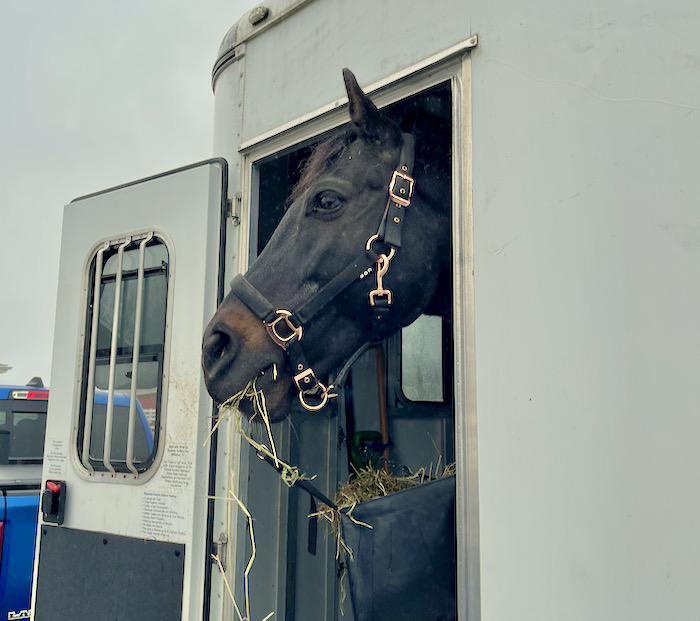 He’s back home and will wear this sterile bandage for 2 weeks. 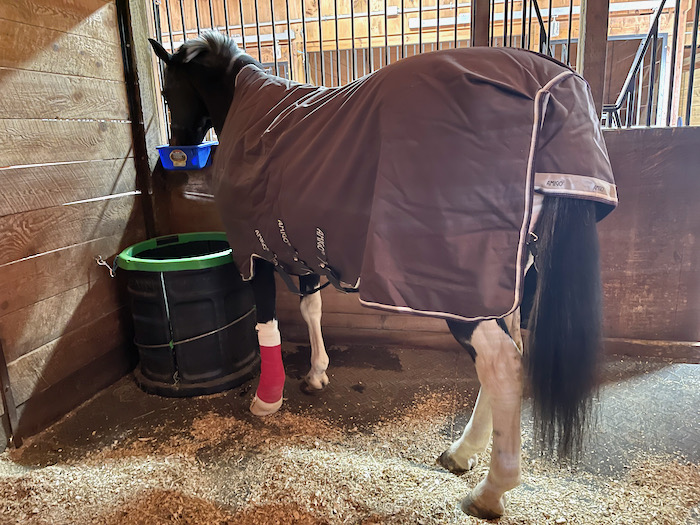 After that, we can start some hand-walking. The plan is that in 6 weeks he’ll be sound enough to go out on trail rides! That’s the plan. But this is Tonka’s front left lameness, and it keeps throwing us curve balls. On the plus side, at the least I can already tell that the neurectomy has reduced his discomfort. I’m sure he’ll be pasture sound, which at this point is enough to make both of us happy. If we’re back on the trails this summer, we’ll both be ecstatic. I’ll let you know!

36 thoughts on “Tonka Has Surgery”