Tonka was going very well. And then he wasn’t. About a month ago, we were working on on transitions that bounded up from trot to canter. He was willing and engaged in the work. 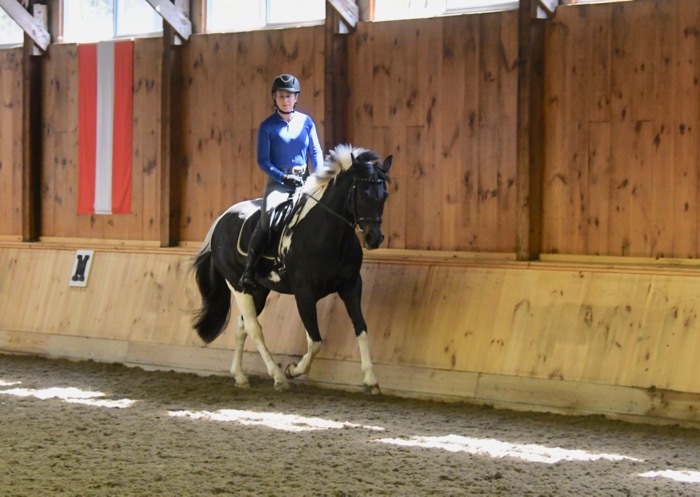 But right after a particularly good transition, he stopped, put his nose in the air and sunk his back. Clearly, Tonka was saying ow!

The next day he didn’t want to trot, so I let him walk, hoping that whatever muscle he pulled would sort itself out. The day after that, when I put the saddle on his back he flew back in the cross-ties breaking them. (This is why you use breakaway loops of baling twine to hold the straps.) Tonka has never done anything so dramatic during saddling. I think that we were both shocked!

After each of these behaviors, I didn’t punish him. I wasn’t afraid of him “getting his way and learning to be oppositional” and insist that he do as I say. Rather, I was grateful that my horse was telling me that something hurt. I sympathized. I put the tack away. I called the veterinarian.

We concluded that it was likely his sacroiliac joint, which had caused issues at this time last year, and that it needed to be treated again. I made an appointment at the Tufts Large Animal Hospital. I’m fortunate in that it’s less than a 45-minute drive from my barn. I wasn’t so fortunate that the day before the appointment we saw nine-inches of snow.

Read this about how much I love my rig, especially my new pickup truck. 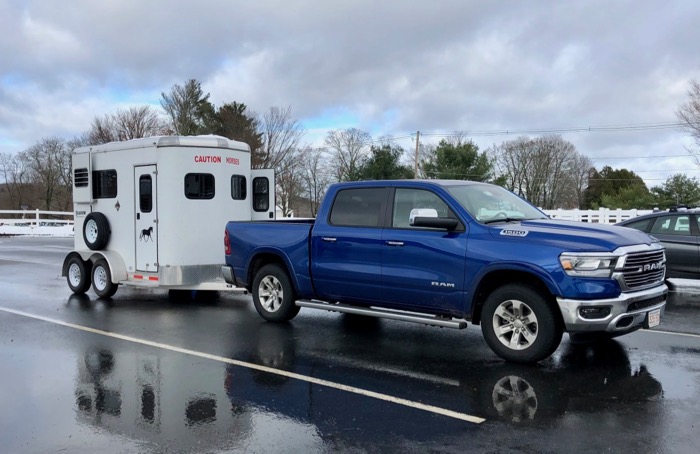 First we went into the holding stall. Notice how calm Tonka is in this totally foreign environment. 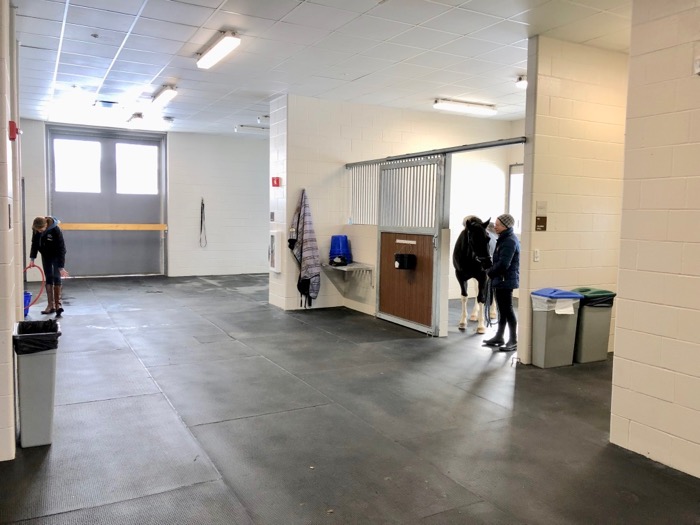 We looked out the window together. That helped to settle him. 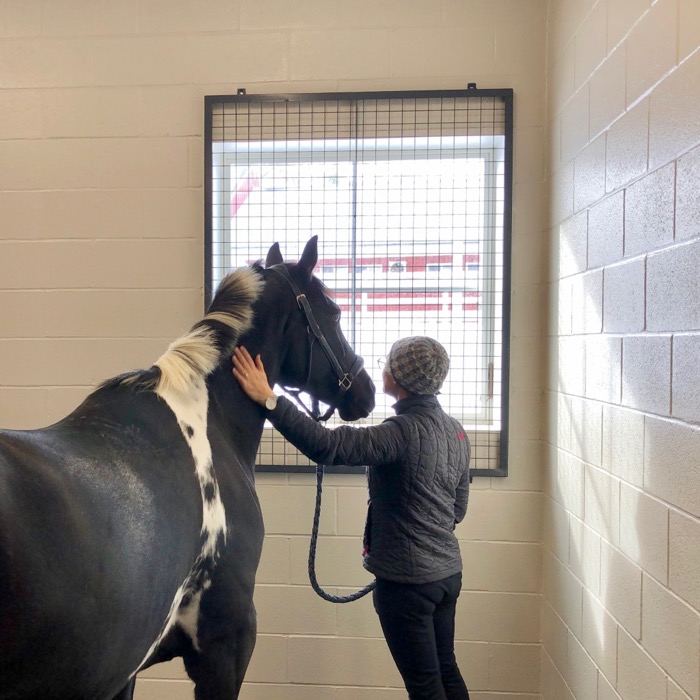 We saw the same veterinarian that we saw last year, Dr. Bubeck. She did flexion tests on his hocks. The left tested positive, the right hock was fine.

She watched him go under saddle, or I should say not go. At the walk, Tonka was fine.

But look at what he tells us about the trot.

It was decided to inject the hock and the SI joints with a cocktail of drugs which lubricates them and helps them to heal. For this, we went into an examination room. Even there, Tonka was trusting and perfectly behaved. 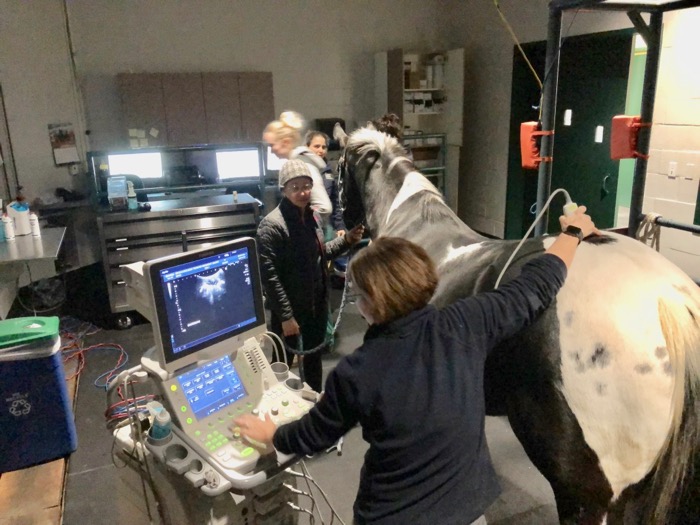 Tonka stood still while they inspected his back with the ultrasound. It was only right before they inserted the (extremely) long needles into his SI joints that he was given a small dose of tranquilizer. I think he liked being stoned (!) Tufts is a veterinary school. There were extra people around to watch – and dote on him (and generously feed him horse cookies from the jar on hand.) 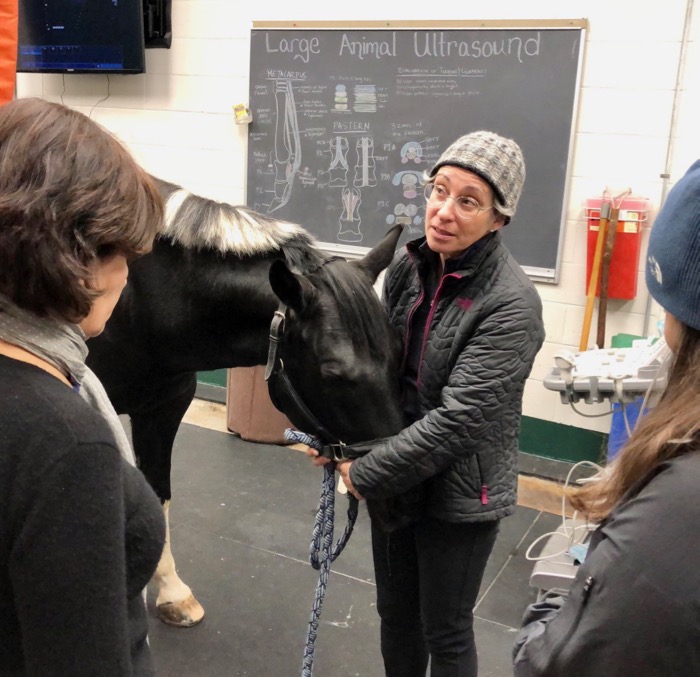 All of the people in the room were impressed by my horse’s polite, amenable, impeccable behavior. A horse that stands relaxed like this: 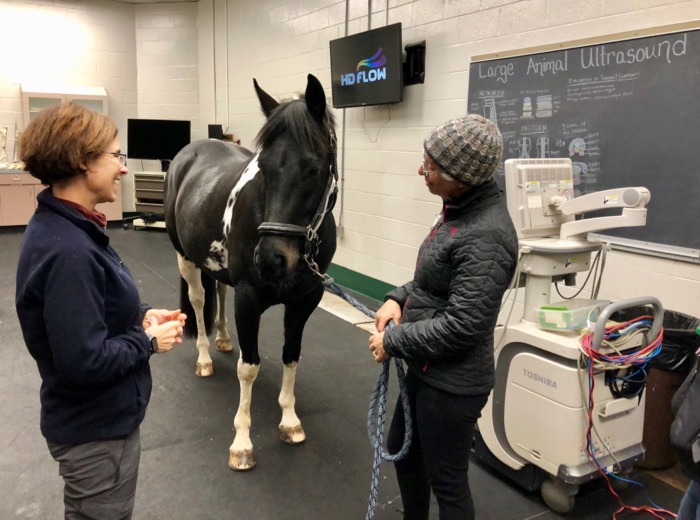 and doesn’t budge or fuss during blood work: 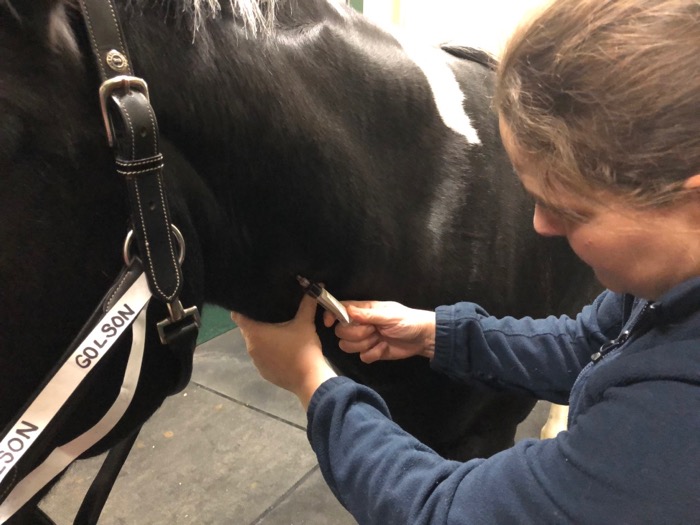 makes everyone’s jobs easier. And it’s so much better for the horse!

To have such a trusting and cooperative horse took homework on my part. I try to be thoughtful and present for every interaction that I have with him, knowing that he registers every moment. (For more about this, search the relationship building category of this blog.)

But, it also takes training to have a horse that can handle a visit to a vet hospital with such aplomb. I’ve taught Tonka two things that I consider to be essential for a confident and cooperative horse. These are:

1) go forward to a hand touch

2) stand quietly with me.

For Tonka, the hand touch has such a deep history of reinforcement that it overrides wariness and fear. He sees my hand, hears me say touch, and becomes calm and confident, no matter where I’m asking him to go.

The second behavior, standing still with me, seems simple, but it is perhaps one of the most challenging behaviors that I’ve taught him. I expect it to be his default. There are so many things that could cause him to be frustrated, or antsy, or needy. For instance, after a training session, when there are carrots still in my pocket, and we’ve just finished doing interesting work, he has to change gears and relax. No cute nuzzling, no asking for attention. Fortunately, horses thrive on being peaceful members of a cooperative group, and so standing still can be innately rewarding to the horse – if you structure the training in a way that the horse can experience the calm. Practice these companionable moments and you’ll have a horse who is patient and relaxed, even in trying circumstances.

I used both of these behaviors at Tufts, and Tonka didn’t appear at all stressed. In fact, he seemed to rather like the experience. But I hope that we don’t have to go back soon! 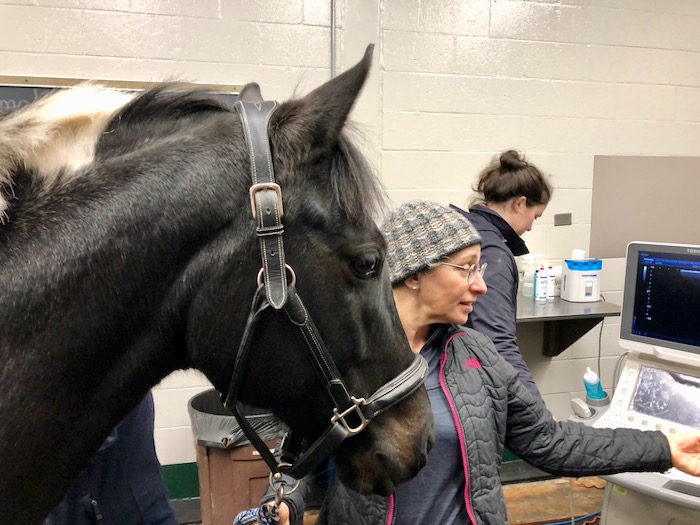 I’ve already seen improvement, and I’ll know in another week how successful the injections were. Fingers crossed that after a careful month or more of rehab, that Tonka will be back to those brilliant canter transitions.