All horses can potentially cause injury to us humans. Their vision, hearing and smell keeps them hyper-aware of danger, and their response to that is to put distance between themselves and the perceived threat. If prevented from fleeing, they will rear, kick and strike-out. Horses are especially wary of new things. A flower in a pot that was empty. A jacket on a fence post. A cow in a field where before there was only sheep. This sensitivity to the new has kept horses alive for millennia, however it makes riding them a challenge! 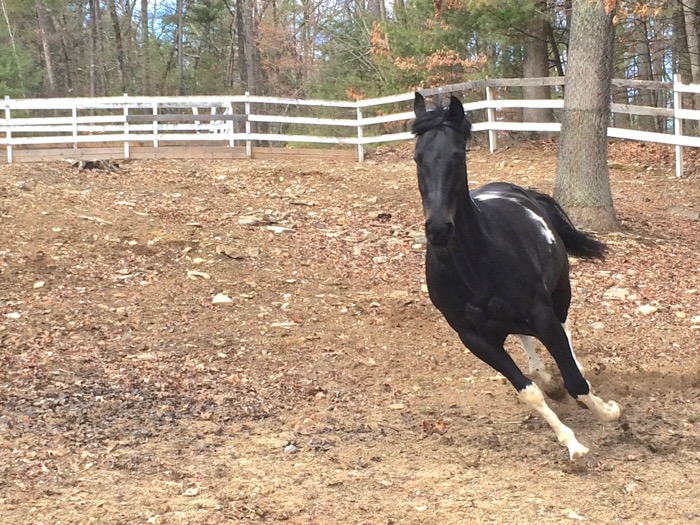 A horse would rather not bolt. Bolting not only expends a lot of energy, but it is also risky – a horse could fall, run headlong into worse trouble, or become separated from the herd. A horse is aware of these dangers inherent in flight. Give them the confidence to stay put, and they will. Horses have the capacity to make sense of whatever worries them, mentally putting it into the no problem column. It’s our job as their protectors to give them courage for a world that they weren’t designed to navigate. (Tractors! Dark stables! Cross walks!) Trainers spend a lot of time working with horses so that scary! becomes no problem. 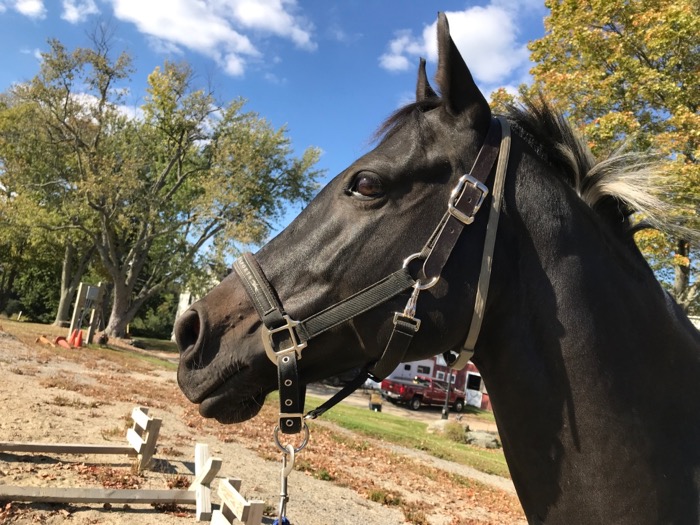 One way to get a horse to stay put in the face of fear is to restrain them. If the horse resists, force is applied. Often, to get the horse to stand still, the handler does something that the horse perceives as worse than the scary thing – chains on the nose, whips, being made to move in a tight circle until exhausted. With these tactics, the horse learns that nothing that they do matters, and they give up. Behavior scientists call this technique flooding. It’s been studied in organisms from lab rats to humans. This strategy can look like magic, and the horses it’s done to will behave in extraordinary ways. They’ll go through hoops of fire. Although the animal will do your bidding, they also become listless, disconnected from relationships, and are prone to explosions of aggression. (I’ve written about flooding here.)

Here’s a non-horse example of flooding: Let’s say I don’t like snakes and you think that’s ridiculous. So, to teach me that snakes are harmless, you close me up in a small room with a snake. At some point I’ll stop showing outward signs of fear, after all, one can’t yell forever. I will stand still. But that doesn’t mean that I feel any differently about that snake. It’s likely that rather than liking snakes, I will have developed a fear of small rooms, and of you. And I’ll be very, very angry at you for putting me through that.

There is another technique to use, this one is called desensitizing. Done right, it is a gentle, incremental way to expose your horse to scary things, until they are no longer concerned by them. 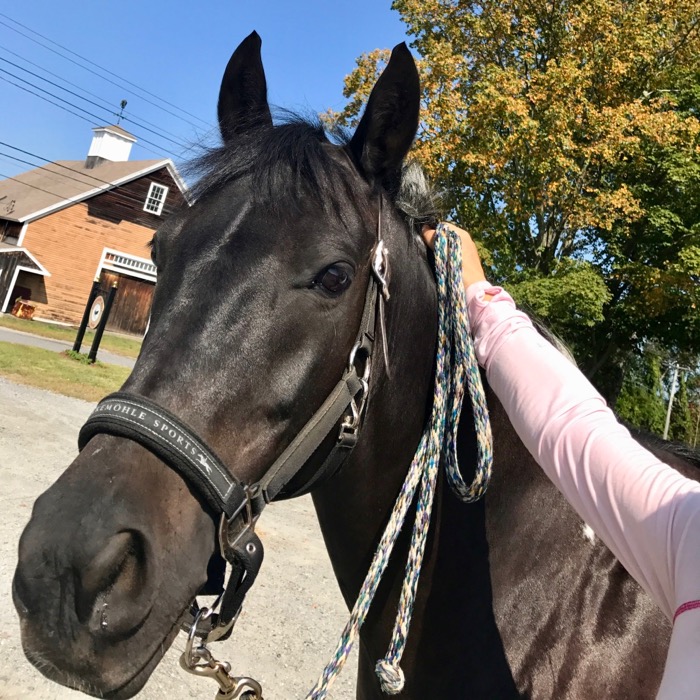 Desensitizing should always start from a place of calm. The horse is given all the time it needs to observe the scary thing, mentally process it, and choose to get closer. Horses are innately curious beings and will investigate new things when not fearful. For a horse afraid of balloons, I once tied one several yards outside of his field. By the end of the day, he ignored it, so then I brought the balloon closer and tied it to his fence post. He chose to investigate. From then on, you could ride him past balloons.

With desensitizing, it’s essential that the horse isn’t restricted and can move away if they feel stressed. Unfortunately, people rarely do desensitizing correctly. They make a little progress, and then get impatient and force the encounter. Do that and you are on the slippery slope to flooding. But, real life rarely matches the ideal training scenario. Few of us can work our horses in total freedom. Often, we need to keep them safe on lead lines. For example, if I’m getting a horse desensitized to traffic I can’t allow him to be loose on the road. A compromise is to prevent the horse from taking off, but to not force the forward. The horse learns that there’s no option other than to stay with you. This is not a bad goal and is a workable plan IF you begin below threshold, and IF you release pressure when the horse is calm. However, if you have to resort to yanking the halter, jerking a chain on the nose, hitting with a whip, etc, to keep the horse in place, then you become as scary as the object to your horse. Obedience that stems from fear has so many damaging repercussions.

Of course, there’s ideal training theory, and then there’s real life, and real life is messy. There’s not always time or opportunity to desensitize your horse. There are situations when utilizing mild pressure and quick release makes sense. Let’s say you’re on a trail ride and the horse sees a boulder and raises it’s head and snorts. You let your horse look, but – and here’s the compromise – you do not let him turn towards home. You use the reins, your seat, and your legs to keep him in place. You wait. Take a deep breath. The horse relaxes. You squeeze a little with your legs. You get a forward step. You breathe again. The horse is given time to process that the rock is not a bear. You ask again with your legs to go forward, and your horse does. The next time you pass that boulder, it’s in the no problem column. 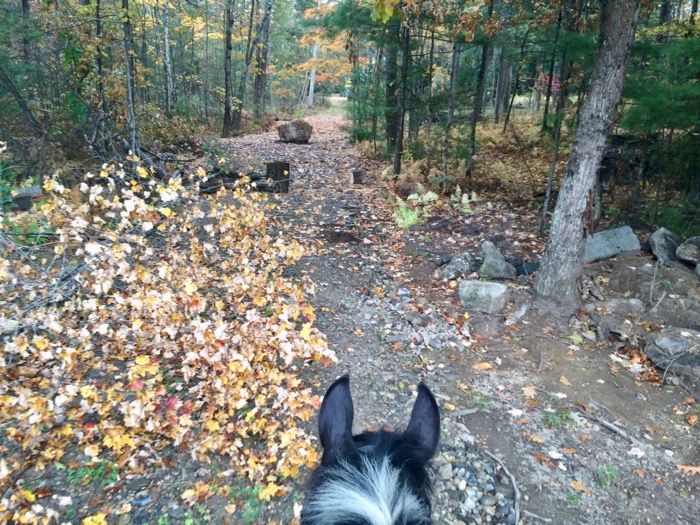 Like desensitizing, counter-conditioning doesn’t work if you start from a place of fear. When I first got Lily Dog from the rescue she needed a bath. I put her in the tub, and thinking to counter-condition the experience, I fed her pieces of cheese. Instead of loving bath time, she stopped eating cheese because in her mind it was a predictor of bad things!

I’ve learned from Lily, and since then I’ve used counter-conditioning successfully in many situations. I’ve taught Tonka that when I say “deer” that there’s one nearby, and that for looking at it calmly, he gets a peppermint. For Tonka, deer = treat, and are something to look forward to seeing, not to flee from. 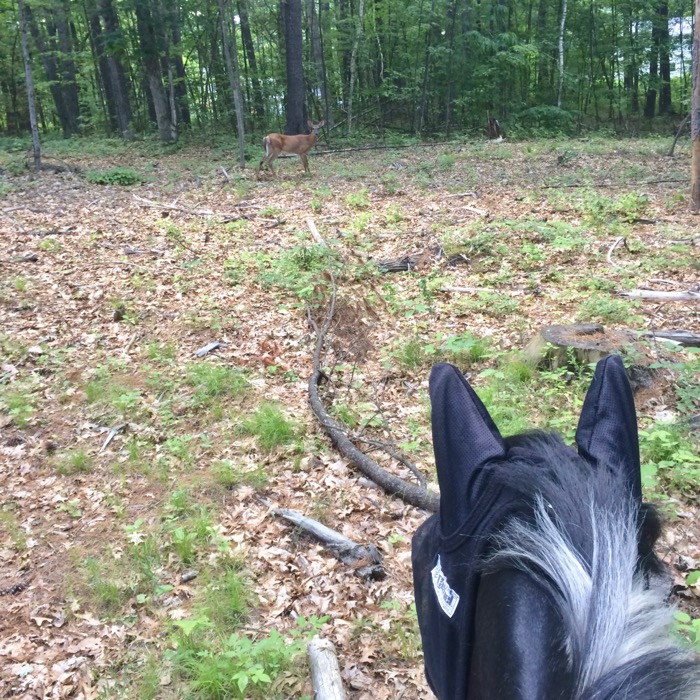 What prompted this long post (thanks for staying with me!) was Tonka’s behavior on the road. I labeled it “barn sour” but it is more than that. With a little observation, I have been able to identify several distinct issues contained within this behavior label. The first is that my horse, who was previously stoic in the face of traffic, has become fearful. At my new barn (since June) I’ve been riding on a road where the vehicles go faster than he’s used to, and this winter their tires make loud and scary noises as they kick up salty sand (spread to keep the road de-iced.) Tonka was brave on pavement, but not in this traffic. Now that he’s fearful, once we get out of sight of our home barn, Tonka wants to get back. That’s the barn sour bit. 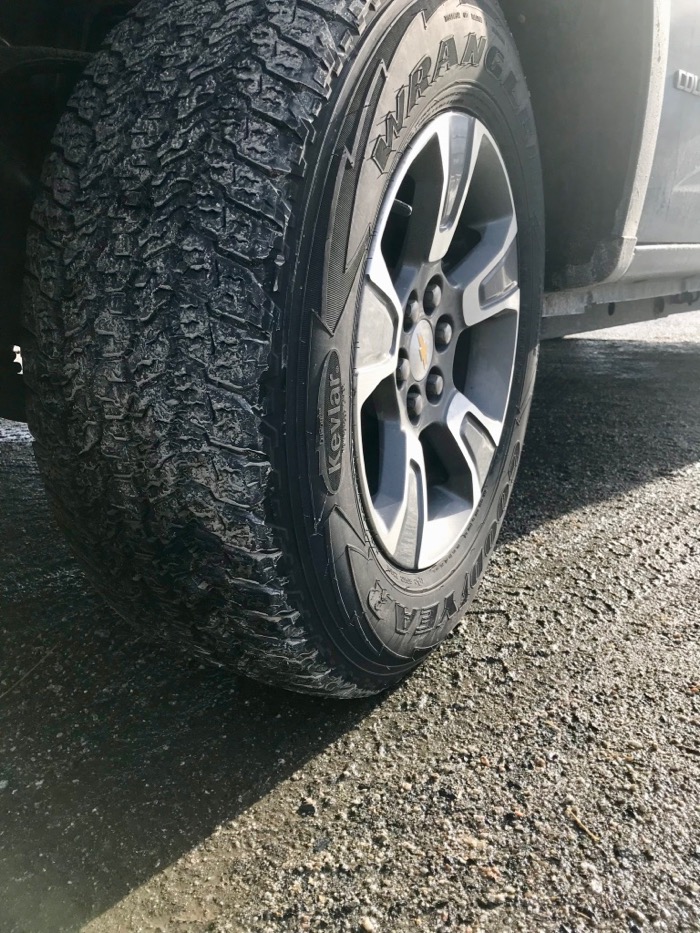 I’m not going to work with him on these issues right now. It’s very cold, there are dangerous patches of ice, and I can’t find a safe, calm place to start. Come springtime, we can stand in a grassy patch and watch cars go by. That’s the desensitizing bit. I will let him graze and feed him carrot pieces as a car approaches. That’s the counter-conditioning. When Tonka once again shows no fear of standing while cars whizz by, we will go a little further down the road. I will ask him to stand and look towards home. I will utilize my clicker training, mark the moment of calm with my bridge sound (I say Dee!) and give him a carrot. (The bridge gives me the precision to let him know it is the relaxed stance that is rewarded.) I will be very aware of his threshold and try not to cross it. It will take time.

So, I have a plan. But I might not do it. I think that Tonka is right not to want to walk down this road. I wear a vest that says pass wide and slow, but few cars do. 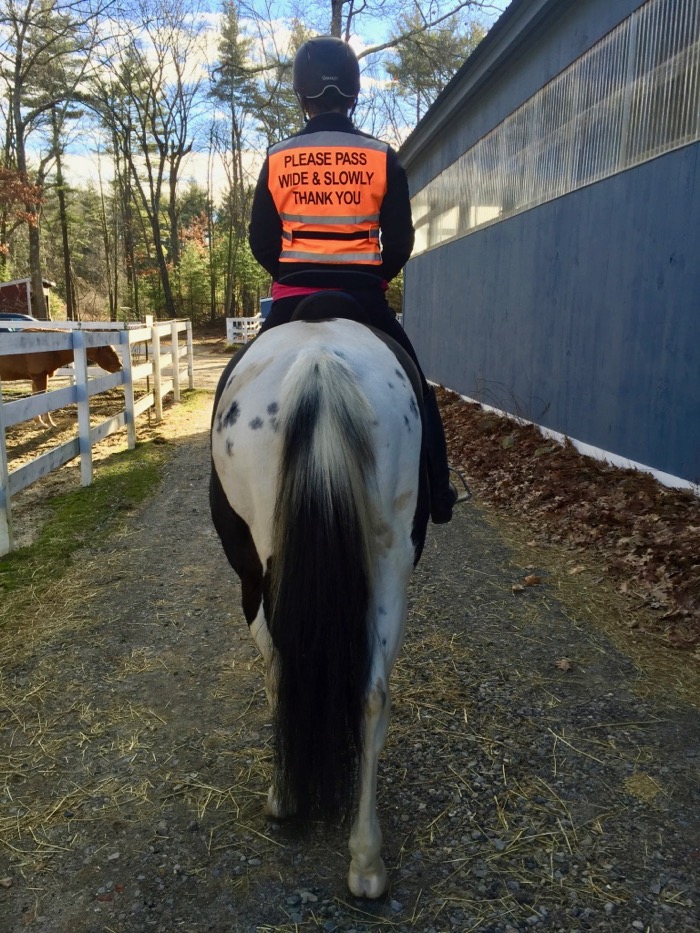 I have other options. We can trailer to conservation land where the only scary things are mountain bikers, and those we’ve already counter-conditioned! When Tonka sees a bicycle, he thinks peppermint! Counter-conditioning does work.

12 thoughts on “Desensitizing and Counter-Conditioning Horses”