Horses can go from a calm state like this: 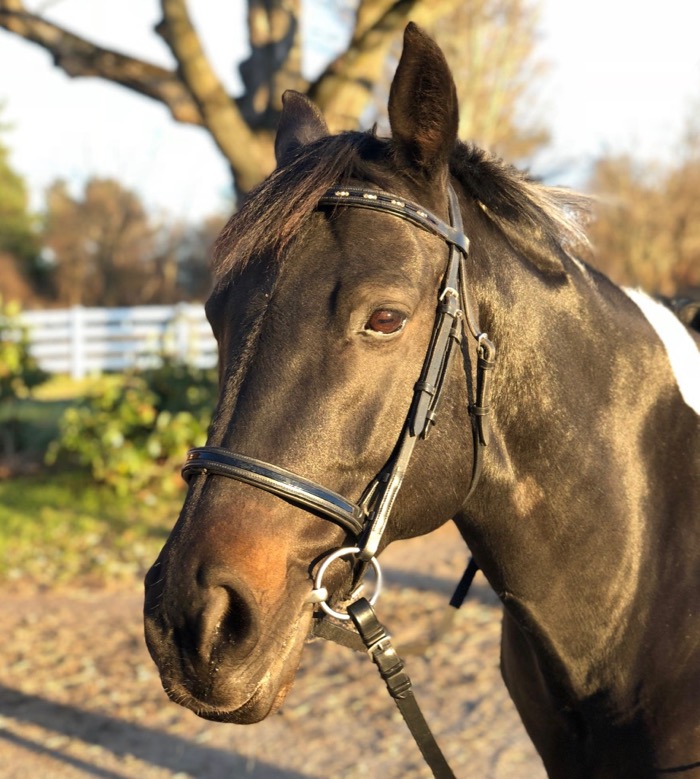 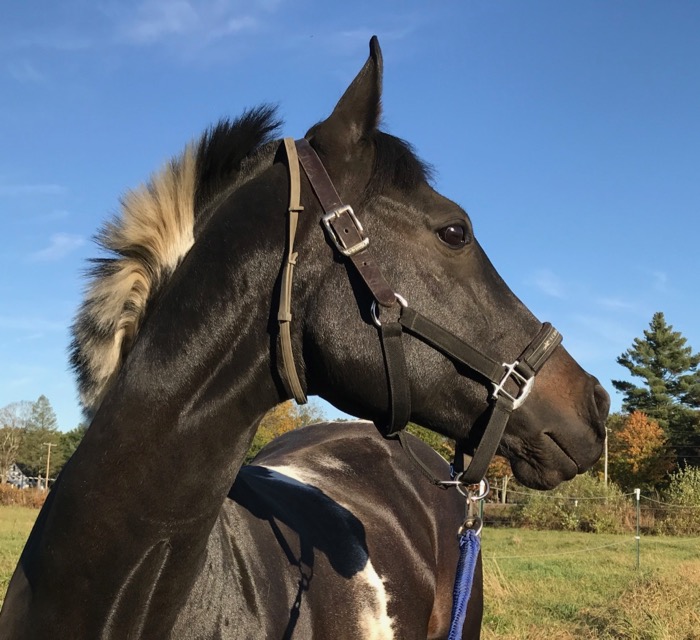 in the blink of an eye.

You can be sitting on a horse, relaxed and chatting with a friend, when suddenly you and your horse are going at breakneck speed across the arena.

People say He just freaked out. And He spooks at nothing.

It’s just that your horse knows things that you don’t.

We humans are dull compared to our animal friends. We have better close-up vision than horses, but they can see a hint of movement at a distance. We ignore the scant information coming in our nostrils. Horses have 4-D smell. Not only can they pinpoint where a scent is (we know only that the odor exists), but they also know whether the source of it is coming towards them or moving away.

There are days when all of this input can be taken in and processed calmly. Sometimes, though, the horse is at, or over, what is called threshold. That’s when there are just one too many things to deal with. You know how you can cope with a screaming toddler, but if there’s a screaming toddler, and the phone is ringing, and there’s a pot boiling over on the stove, it’s all too much to handle? It’s the same thing for horses.

It has been crazy-windy here. In this photo, Tonka is not in a thick blanket, rather, the sheet he’s wearing has been blown up by the wind. He’s not swishing flies with his tail – the wind is sending it out. Everything is moving, and smells are coming in on sudden gusts. Under such conditions, Tonka grazes, but not calmly. He frequently brings his head up, nostrils flared, eyes scanning the perimeter, trying to make sense of what is going on around him. It wouldn’t take much to send him over threshold. 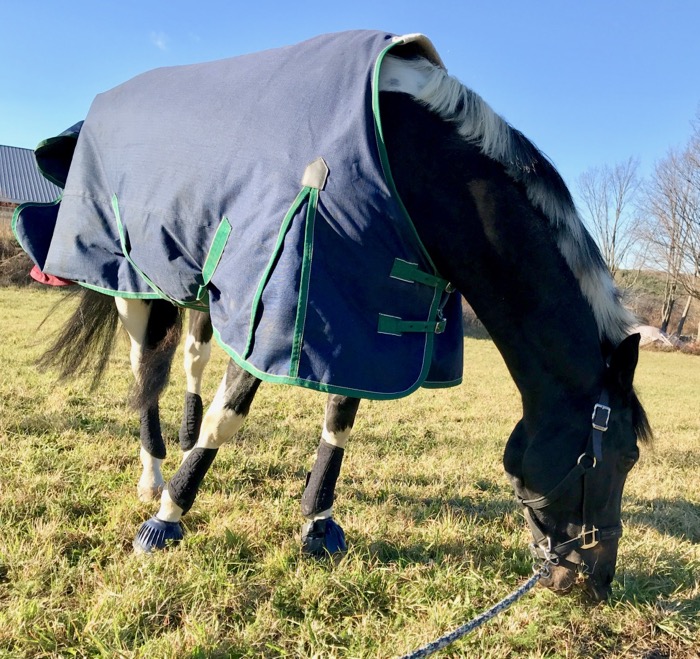 We know this field. It changes with the seasons, with the weather, with the time of day. Sometimes there are deer or turkeys. A barking dog. Tonka can handle it all. But, yesterday, when I took him out to graze, the wind blew hard. Tonka was on edge, and then he went into an alert stance. He quivered. Something was different.

I looked around. Tonka looked around. He peered into the woods. I did, too, but I didn’t see anything obvious. I looked more carefully. There was a glint in the trees. 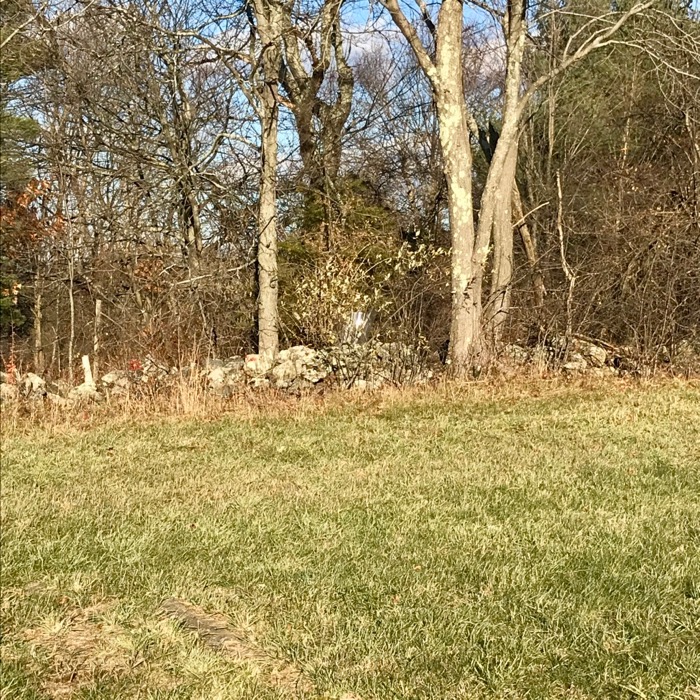 There was a scary thing! 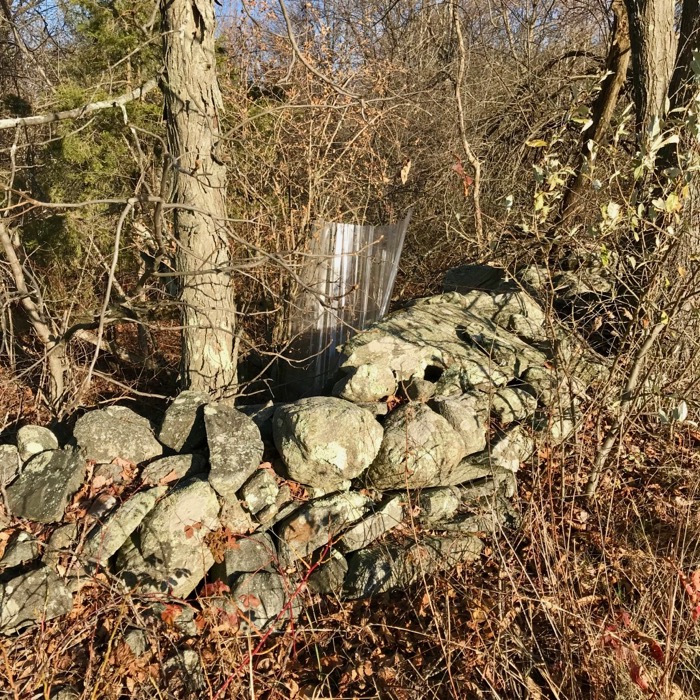 This was a something that Tonka couldn’t make sense of. Reflecting light. Shaking in the wind.

Tonka pranced and circled around me, contained by the lead line. I knew that the plastic was not going to hurt him, but he did not. I also knew that this was not the time to teach Tonka to to get over his fear. When conditions are so overwhelming that you’re beyond threshold, it’s not the time to insist that they face what frightens them. It was enough that I could lead Tonka safely away. I asked him to walk quietly next to me, and he did. I brought him back to the barn. Then I went out to the field, extricated the plastic, and returned it to where it had been stored before it had blown off in this crazy wind.

Yesterday, though, was not a total loss. After that excitement, I tacked Tonka up and we went into the indoor ring, where despite the whistling sounds of the wind in the metal siding, he remained below threshold. He did startle a few times; when he settled after, I made a point of rewarding him for his calm demeanor.

Today the wind was still blowing, but not as fiercely. We went back into the field. I didn’t even have to show Tonka that the scary thing was gone. Somehow he knew, and settled right into grazing. 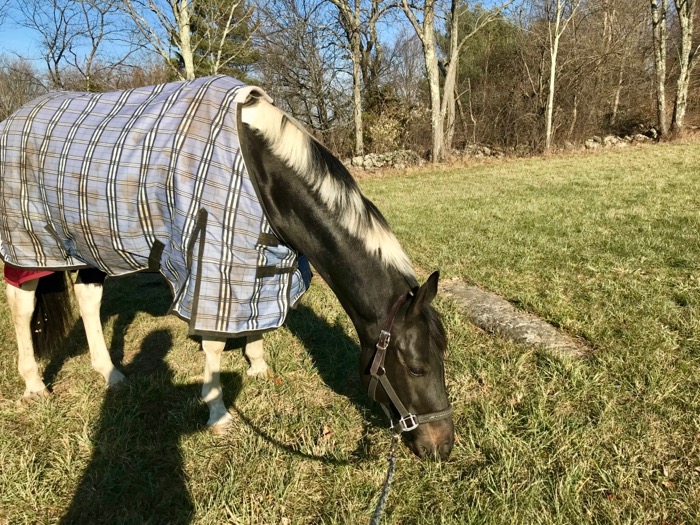 Then I tacked him up, got on, and rode into the field. We had a lovely, safe and sane ride. 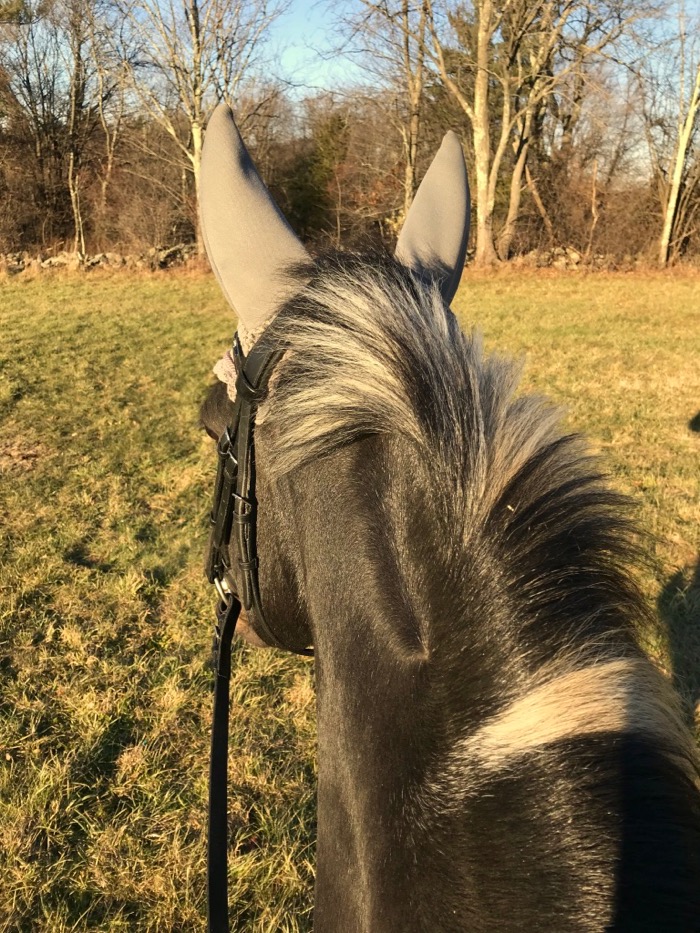 By the way, that funny grey “hat” is a

! The ears are lined with what looks like neoprene. He can still hear me say good boy! but it muffles the weird, whistling, wailing noises that the indoor arena makes just enough to keep Tonka from being too alarmed. It also keeps his mane from blowing onto his ears and tickling them. He hates that 🙂

3 thoughts on “It’s Never Nothing”