As I’ve written about before, Tonka and I have been walking. Mostly, we’ve been in the covered arena, on safe footing, and sheltered from bitter cold winds. Two weeks ago, during a break in the weather, we managed to get down the road a bit. Tonka was on alert, but stayed within the bounds of sane behavior. So, last week, when it warmed up above freezing, I thought we’d go a bit further.

Tonka and I set off. 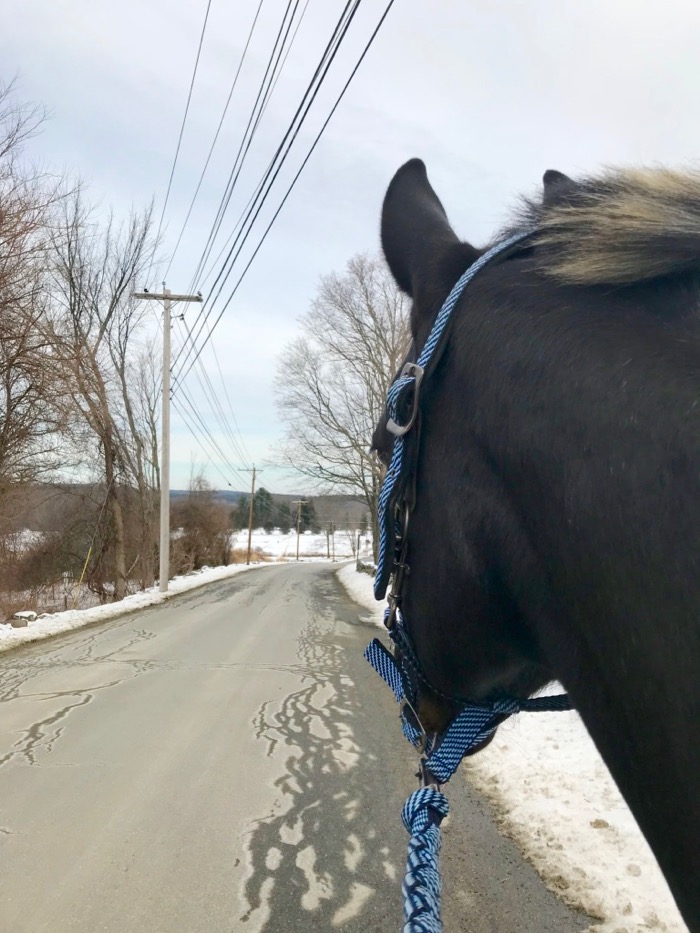 This time, the horses at the stable down the road were in the fields across the street from their barn. Tonka was very aware of that! We passed by them, and I took this photo. I thought that Tonka looked quite handsome.

But notice that ever so thin line of white in his eye? The bulge in his lower neck? I did, but I wanted to walk a full mile, so went another hundred-feet up the road so that we’d clock a half-mile before turning around.

Tonka went over threshold. I’ve written a bit about threshold here. Do you know the story about the straw that broke the camel’s back? A man loads a camel’s pack with straw to take it to market. He puts on a full load, but has more to take, so adds another bundle. The camel bears that weight, so the greedy handler adds more. The camel buckles a bit at the knees, but stoically stands. It’s still not enough for the man. He adds just one more stalk. And with that seemingly inconsequential bit of straw, the camel falls to the ground.

So, back to my tale about our walk down the road. We made it a half mile and turned around. At the top of that little hill is Tonka’s barn. 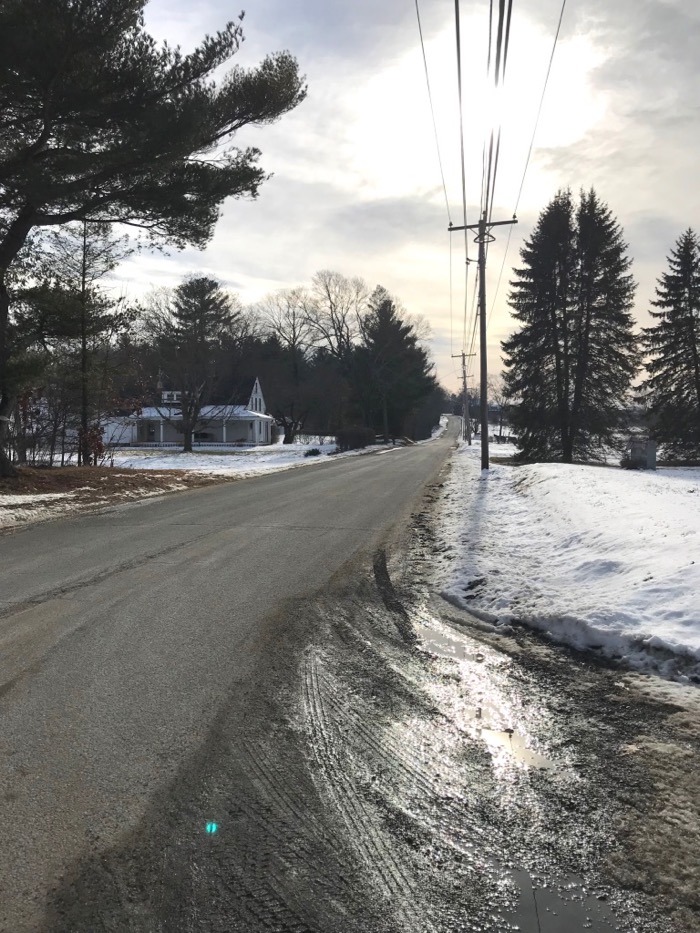 That’s where his friends are, his safe stall, his hay. We were further down the road than we’d ever been. A few vehicles had noisily driven by, kicking up road sand. There were horses pacing along the fence line. It was too much. Tonka was over threshold and all he wanted was to get back home.

I have no photos for what happened next. I was too busy.

Energy seemed to fill his body. It made my horse bigger. I could feel him surge forward. There was not a lot that I could physically do to keep Tonka with me if he decided to take off. I was holding onto an 1,100 pound horse with a cotton lead rope. What I had for control is that Tonka is trained to walk politely next to me. Walking next to me has positive associations. He also knows that if I put pressure on his halter via the lead line, that he’s to slow down and stay with me. Tonka tried, he really did, however, there was prancing. A bit of passage. Some piaffe.

Cars drove by. We tried to stay at the edge of the road. But we also had to avoid ice. 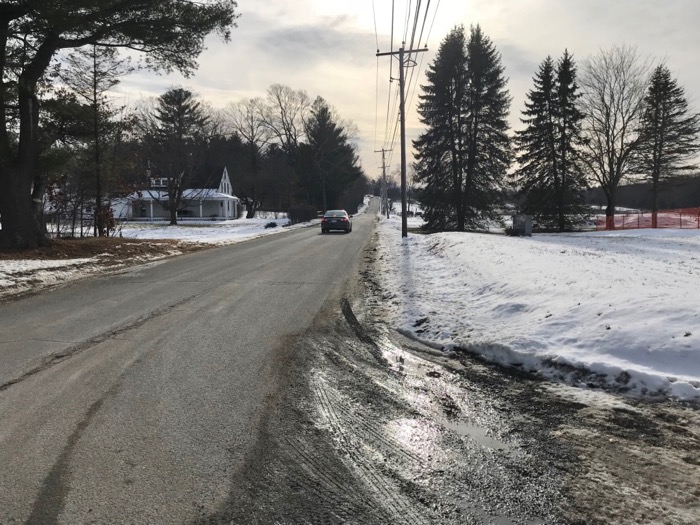 A FedEx truck headed towards us. I waved at him in that universal stop language. The driver ignored me and kept coming. I slowed Tonka down, but his contained energy had to go somewhere. Tonka reared. Then all four feet came off of the ground. Then the hind legs kicked out in a capriole. We were in the middle of the road, putting on quite a show. The driver stopped. A glance at him told me that he was not pleased. Fortunately, Tonka and I made it safely past him.

As we made our way up the road, Tonka continued to leap, rear and kick out. The closer we got to home, the more wound up he became. Tonka came very close to kicking a car as it drove by. (Do people not understand that when they see a fractious horse in the road that they should slow down and go wide? The answer is, no, they do do not.)

While all of this was going on I was thinking, could my horse be barn sour? Really? My horse that usually slows down on the way home when on trail rides? It was clear that yes, in this situation, Tonka was barn sour. He was like a trout heading upstream. Bounding, leaping, blind to the dangers. He was going to get home no matter what.

What I could appreciate at that moment, was that despite his anxiety, Tonka continued to listen to me. He stayed at my side (albeit a lot more energetically than usual!) He never once turned on me to let out his emotions. He never struck or body-slammed me. In fact, with all of his cavorting, Tonka was careful not to hurt me. Tonka was trying so hard to do right. But he was over threshold. This was not a training moment. His brain was not in a place that could absorb a lesson. We had to get back.

Forcing him to stand still, or to “move his feet” and back up would just have added to his anxiety. It would have also taught him that along with the big world being scary, that I was too, because making him do anything like that would have required punishing force. That said, it wasn’t a free-for-all run for home. I didn’t allow him to go forward when rearing and leaping. Using the lead line, my voice, and my body language, I could get a momentary stop in the action. As soon as all four hooves were on the ground, we’d take a step forward. Going home was what Tonka wanted, and he became aware that it was contingent on walking (even if that walking was a stunningly beautiful passage that is not his usual way of going!)

We arrived back at his farm safely. I expected an explosion of activity when I let Tonka loose in his paddock, but all he did was put his head down and slowly munch his hay.

I have to face the fact that Tonka has become barn sour. A winter in one place shrinks a horse’s perceived safety zone. The answer to this is to gradually expand his world. I have already started this training. I am taking Tonka out on the road, but in small incremental distances. I’m keeping him below threshold, and rewarding him for standing quietly when facing towards home.

This training uses two useful techniques – desensitizing and counter-conditioning. Both will be employed to prevent this barn sour behavior from becoming Tonka’s norm. I’ll be writing another blog post about them in the near future. Also! I will be giving a talk about the Barn Sour Horse at the Equine Affaire in Columbus, Ohio, in April. Keep an eye on my events page for more details. (If you have a group that you’d like me to come and speak to, please email me to discuss!)