A round pen is an enclosure for horses that can be quite useful. It’s usually about 50 feet in diameter, big enough that the horse can move, but small enough that they can’t get too far away from you. It’s a safe place to start a youngster or do trick training. I use it when I want to check on how Tonka is moving – I can watch him as he goes freely around the pen to see if he’s sore or lame. 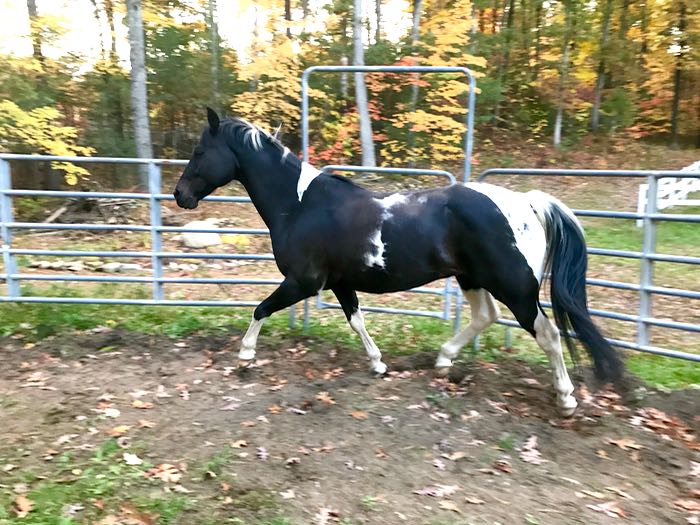 But round pens are also used for something called joining-up. This is a term coined by some in the natural horsemanship world that we’re told “talks to the horse in language it understands” and “moves their feet, like they do to each other.” It’s done by sending the horse around the ring until he stops and turns into the trainer, lowers his head and makes chewing motions. This behavior, we’re told, is an indication that the horse accepts the trainer as his leader. Join-up can be an impressive show. You see the wild-eyed untamed animal stop his frantic galloping and accept handling. You see the horse ignore the scary objects shaken at her. That end result is what you want, right? Maybe not. It all sounds good until you peel back the layers and uncover that what’s happening is something else entirely.

The round pen is the opposite of a natural environment for a horse who is a creature of wide open spaces, where the herd can put distance between itself and anything worrisome. In the round pen there is no escape. This method of training advises the handler to “act like a predator” to make the horse flee. The trainer pushes the horse on, usually with a whip, or a flicked rope, or a bag at the end of a stick. Horses react to this in a number of ways. They might run until exhausted, or try to aggressively fight back with rears and kicks, But none of these strategies work and the pressure from the trainer continues.

The trainer stops using the whip when he sees the horse moving the way that he wants. This is classic pressure and release. I use a similar technique when riding: I press my leg, the horse goes forward, I stop pressing which rewards the horse. I also use treats, praise and petting to reward the forward movement. Soon the light squeeze of my leg becomes associated with good things; it’s not pressure to avoid, but a cue to respond to.

But the round pen technique of join-up takes this well past simple pressure and release. It starts from a place of fear, and then the trainer, rather than easing up as soon as there’s a response, continues to egg the horse on. This unrelenting chasing causes what behavioral scientists term flooding. Flooding is when an animal is exposed to a stress that it can’t avoid and concludes that all action is futile. It’s been widely studied in many species, and in all of them it starts with punishment and it ends with the animal shutting down. This induced passivity is labeled learned helplessness. Rats, confined in a space that shocks their feet will give up, so that even when an escape door opens, they don’t leave. (More about this research here.) Psychologists link learned helplessness to depression.

A horse that stands immobile, oblivious to her surroundings, has likely been flooded. I want my horse to be a thinking partner, alert to his surroundings, able to assess dangers and make sensible decisions about how to react. On the trail, I want a horse that lets me know if the footing is worrisome, or if he sees deer in the woods. In the ring, I want an engaged learner. I’ve seen horses so shut down that the rider has to use increasingly harsh techniques, including the heavy use of whips and spurs, for the horse to respond.

But what about that join-up, when the horse stops his frantic circling and goes towards the trainer with a lowered head? A Natural Horsemanship proponent would say that this is a sign of connection between the horse and trainer and that the horse is accepting him as the leader. He might also point to the horse’s licking and chewing as signs that the horse is thinking and accepting. Neither of these things are true.

Horses in a free-roaming herd live in is a cooperative society. It is not dominance based! Interactions that you see in stabled horses that look like “alpha” posturing are not about leadership, but about resource guarding, something that wild horses don’t have to do because there are no resources (such as food or shelter) to guard. Yes, horses in the wild have friends and foals, and will tell other horses to move out of their personal space, but there’s no hierarchy.

Researchers tested the idea that this round pen work results in a horse accepting the trainer as the leader. Instead of a human, they used a remote control car. Using pressure and release (the car stopped when the horses moved in the desired direction) they taught horses to stop, turn, face, and approach the car. Obviously, the horse is not accepting the car as the alpha, or looking towards it with warm feelings of trust. The horses in this study simply had been taught that to alleviate the pressure of being chased that all they had to do was to stop circling and go up to that machine. Actually, in this case, the car (and the humans using the remote) were rather good trainers. The horses figured out how to control the outcome and to make that annoying car stop. It never got to the point of flooding. Here is a video of a pony engaged in this training.

What about that licking and chewing, said to be a sign of deference to the trainer? It’s not. This mouthing motion in seen in many species and is a physical reaction to the cessation of a highly stressful event. When you see such mouthing then you know that your horse has just had a very bad time.

(At this point in reading this article there are people who do round pen work who are probably yelling at the computer. What I’ve cited here are extremes in training. There are good trainers who teach their horses to circle around them, using minimal threat and pressure. There are very good trainers who use this technique to teach the horse that turning into the handler and being near their person is a rewarding place. Unfortunately, I’ve seen that training be misinterpreted and it quickly becomes flooding. It’s a fine line that too many people cross.)

So, if you want to be a “leader,” scaring your horse until he gives up is not a way to do it. Developing trust and establishing safe behaviors through gentle training, is.

24 thoughts on “Joining-up or Giving Up?”