I recently had to rework some sloppy training on my part. It took me awhile to notice that I’d let things slip. Tonka is a calm and amenable gelding. But even a horse like that is always adjusting their behavior to what their human is doing. Just because you’ve taught your horse to do something, doesn’t mean that they’ll maintain that good behavior if you slack off.

My wake-up call was that Tonka was getting nippy with the staff at the barn. On our walks, he was grumpy, bumping into my arm, and crowding me. 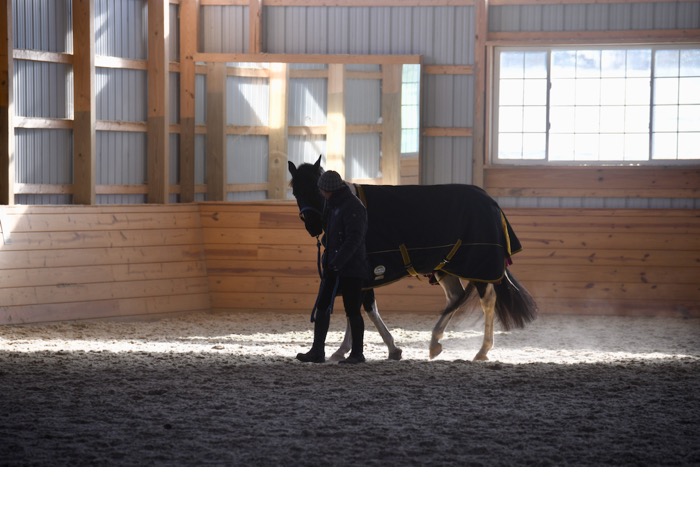 We humans are verbal beings. Horses are not. They primarily communicate with body language. Usually their actions are subtle. These are animals who tell each other to move out of the way with a sideways flick of an ear. They talk a lot with their muzzles. A wiggle of a lip on another’s neck conveys friendship. Affection is shown by mutual grooming with incisors. When annoyed, teeth are used to nip, but without intent to harm. Hard bites are rare (I see them in crowded, stressed environments – that’s another story.) I don’t know how long Tonka had been trying to tell me something before it escalated to the equivalent of him yelling at me, but I finally heard him. 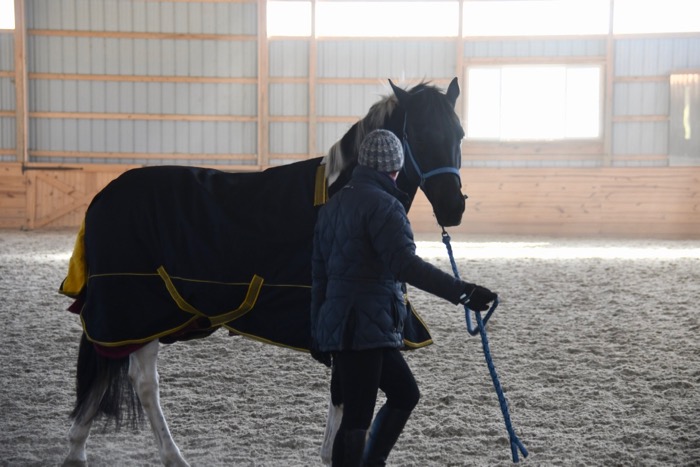 Tonka was frustrated. He knew that I had food on me, and he wanted it. I’d thought that I was clear about when he got cookies, but my criteria and delivery had gotten messy. It was so fun – for me – to feed Tonka, that’d I’d lost sight of how it was working for him. In and out of training sessions, I was reaching into my pocket, at what must have seemed like totally arbitrary moments. He’d noticed that the motion of hand to pocket was reliably what predicted food, not his behavior or a verbal signal from me.

I had to disconnect the association that Tonka had made between getting treats and my hand going into my pocket. The plan was simple. During our walks around the indoor, I’d touch my jacket and no food would appear. When he stopped reacting to that, I’d reach my hand into my pocket, and again, no food would materialize. Sometimes, I’d put my hand in and pull out my phone. Through all of this, we’d keep walking. 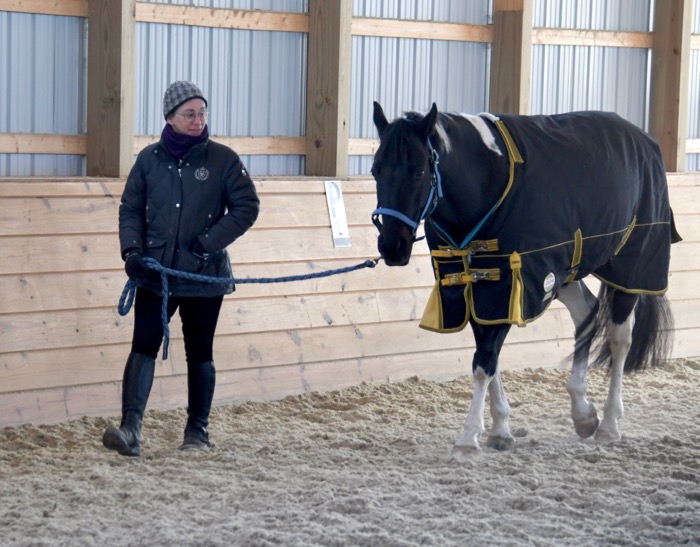 I knew there’d be initial frustration on his part. I was right. 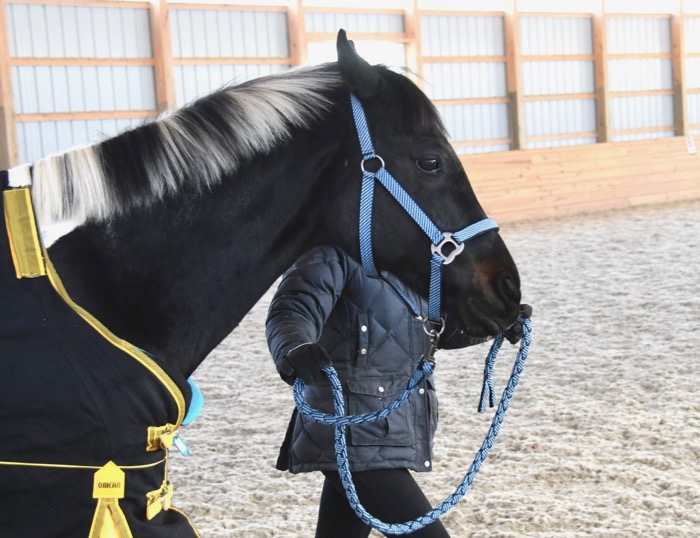 Tonka even reached over and grabbed my arm with his teeth! He didn’t mean to inflict pain, rather he was trying to get me to stop walking and to feed him. I said “Eh! Not allowed!” and kept walking. 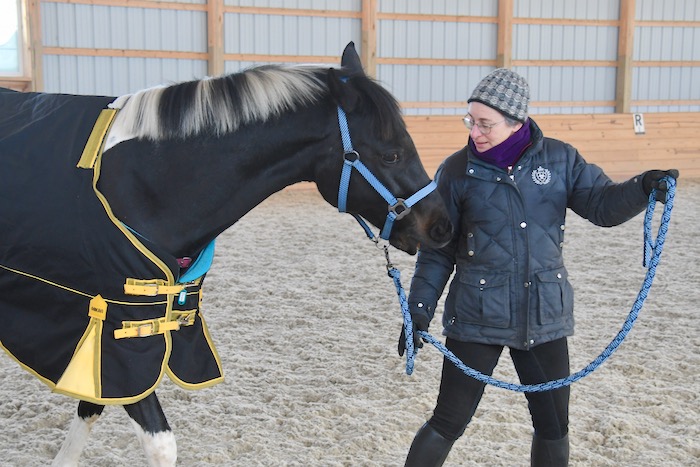 Day after day we walked. 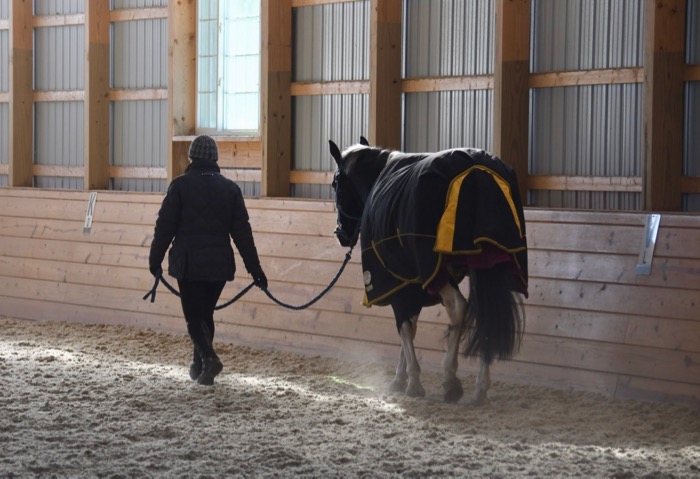 Being companionable and relaxed is a state of being that horses would like as their default. Once Tonka stopped paying attention to my hands and pockets, that’s how he could be. 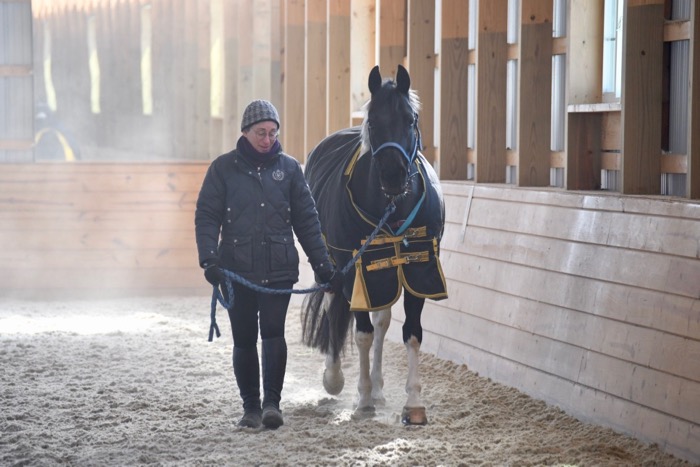 A calm and low-key demeanor is especially important when the footing is bad. Now that Tonka is no longer focusing on my pockets, that’s exactly how he’s going. 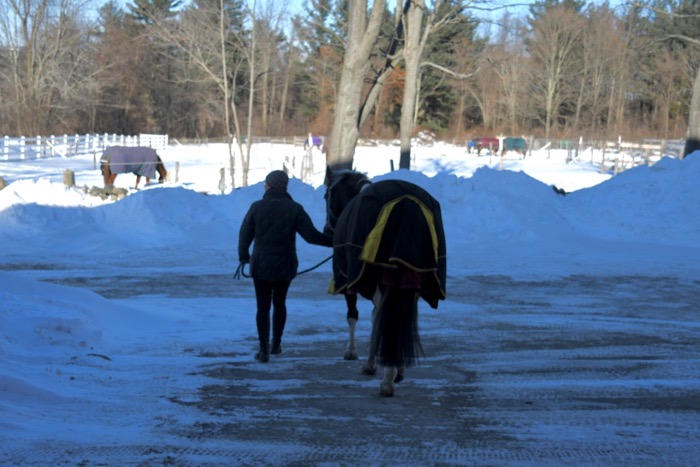 (I do continue to use food in training, but it’s within prescribed bounds to keep everyone safe and content. As with all behavior, what was going on was complicated and my response has been equally multifaceted. This story is only a small piece of the training picture. I’m working on more posts about food rewards, and extinction. Stay tuned!)