I have a client who is new to horses. She started riding lessons in her 50s, was immediately enthralled, and only a few months after first sitting in a saddle she purchased a horse. She found a horse (let’s call him Bo) who looked to be safe to be around, and the sort to take care of her when riding. But horses are independent thinking beings with their own histories. Getting a horse to do what you want, when you want it, is a never-ending process. Even experienced horse owners don’t have perfectly obedient horses that stay that way without ongoing training. My client recognizes that she needs experts to help her become a horsewoman. She has a riding instructor and a couple of friends in the barn who offer advice. But, as all of us around horses know, not all advice should be taken. There are many ways to train a horse, and not all fit within your own personal framework of how you’d like to interact with the world. With experience you get your own compass and know what to apply and what to leave by the wayside. That’s hard for a new owner to do, especially when what had been the “perfect” horse starts to bite and balk a few weeks after purchase.

Over a conversation on Zoom I listened to the story. I asked about the specific behaviors that Bo was doing that caused concern. Then I delved deeper and uncovered more details. Bo had come from a sale barn. He arrived with perfect manners. At first he led briskly at his owner’s side, but in a few weeks he had to be dragged along. This was not the case with anyone else, he still “behaved” with them. Bo also exhibited aggression at feeding times. The owner was told that Bo is bullying her, taking advantage, and needs to be shown who is the boss.

That’s never my approach. There’s always more to the story.

A recent vet check detected ulcers that need medicating, and a possible diagnosis of Lyme (blood work is being done.) The ulcers explain some of the food anxiety and resultant aggression. It hurts this horse to be hungry and it makes him grumpy and defensive. The aggressive behavior around food should lessen when Bo feels better, but resource guarding becomes a learned behavior. I’ll be helping the client to teach Bo that he has alternatives to aggressing around food.

But what about the leading issue? Why would a horse who had perfect manners on the lead rope become recalcitrant? Was it really that he was lazy and wanting to dominate his new owner? I suggested that we flip the perspective.

What if – instead of taking advantage of his owner, that Bo was actually showing that he trusted her to listen to him?

Bo had come from a sale barn which uses dominance methods (including flooding) to create compliant horses. These horses go to new homes behaving impeccably. Taken in by someone who uses the same methods, they might continue to do as bid. But these horses have learned through fear. Once you learn that humans are threatening beings, self-preservation tells you to act the same. I’ve worked with horses who, after leaving such training, have decided that it’s best to threaten (rear, kick, bite) when they feel scared. Other horses stay dull to the world. They’ve learnt that nothing that they do matters. What they don’t think that they can do is to have a dialog with their person. They don’t think that when they need help that they can ask for it. I think that Bo fell into that category.

Before the consult, the owner shared a 20-second video of Bo. To me it looked like he had lameness issues on all four feet. I was relieved to hear that on the day of our first consult, the owner had just had the veterinarian out. My suspicion was confirmed. Bo is foot-sore and needs a new course of shoeing. I asked more questions. What had changed in Bo’s daily routine? I was told that he had moved pastures and now the walk back to the barn was over rockier ground. Put it all together. Bo was hurting and it was getting worse. He couldn’t be stoic any longer, but he didn’t feel safe telling anyone, not the trainer, not the staff, not even the veterinarian (who could lead him fine.) The one person that he felt safe telling that he hurt, and to please slow down, was his owner. She should feel very, very good about that.

Once Bo is feeling 100 percent, there will be training to do to remind him about the necessity of being in lockstep when his person leads him. But for now, how wonderful for Bo that his person is listening to him and letting him know that she’ll go the pace that makes him comfortable. The dialog begins. 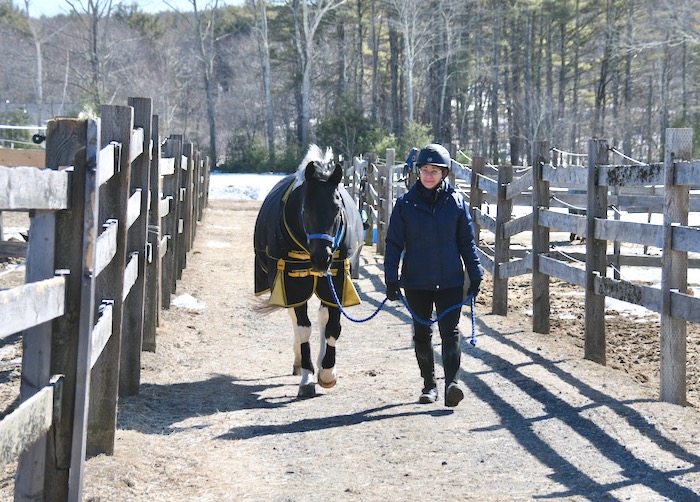 9 thoughts on “Flip the Perspective”