Horses evolved as grassland animals. Their safety was dependent on being able to see the movement of predators like wolves and mountain lions, and so they prefer open spaces. They are herd animals, reliant on their family and friends to be watchful and to use their collective experience to make smart decisions. Tonka has not read about his species’ evolutionary history. He has his own ideas.

Last week I trailered Tonka to Turtle Hill to get out on the trails. 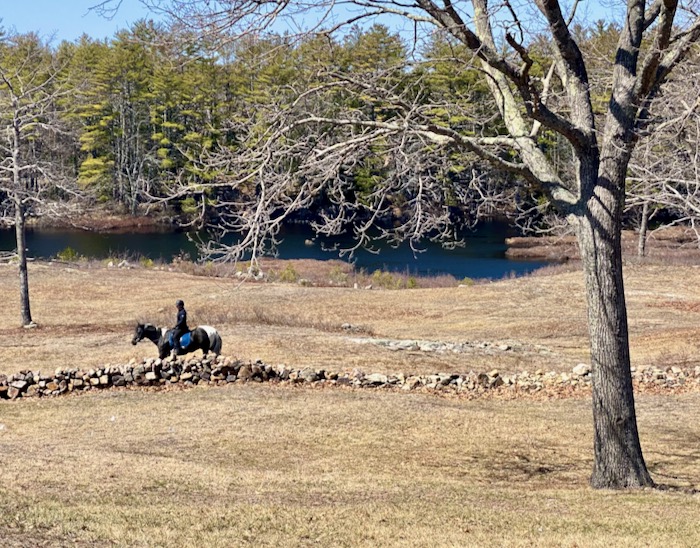 After the ride I thought I’d give him grazing time in the field. The grass is starting to green up, and this was meant as a treat for my horse. 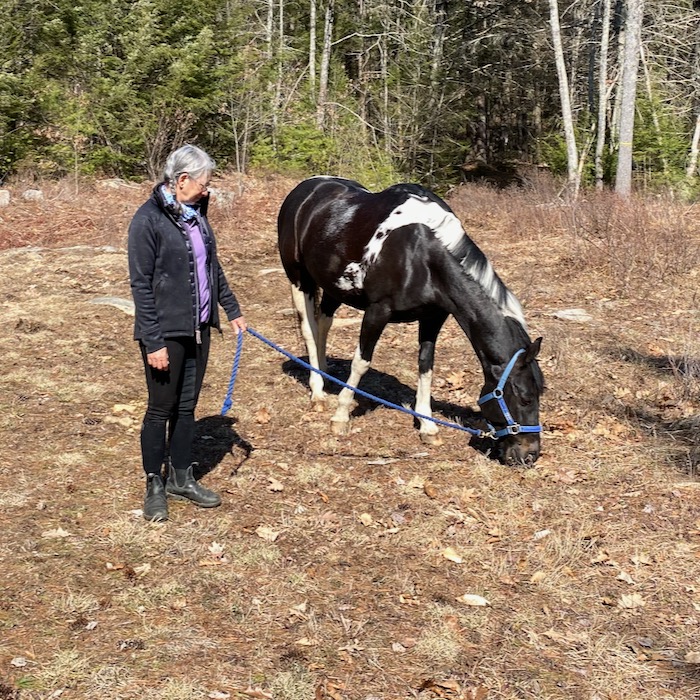 Tonka soon tired of nibbling. He had other ideas. He started off and I followed. I wanted to see what he was going to do. He marched away from the field and into what is essentially a thousand acres of woods, which although it doesn’t have wolves and mountain lions, it is home to coyote and bear. There are no horses. No wide-open sight-lines. No grass. It is a place that should make him cautious. It doesn’t. Tonka led me on full of confidence and curiosity.

We crossed a stream. We kept going. There is an old trail which, as we leave our property, narrows to an overgrown path. I’ve explored back there on foot. It’s not safe for riding. Tonka thought that it was, however, suitable for exploring on foot (hoof!) 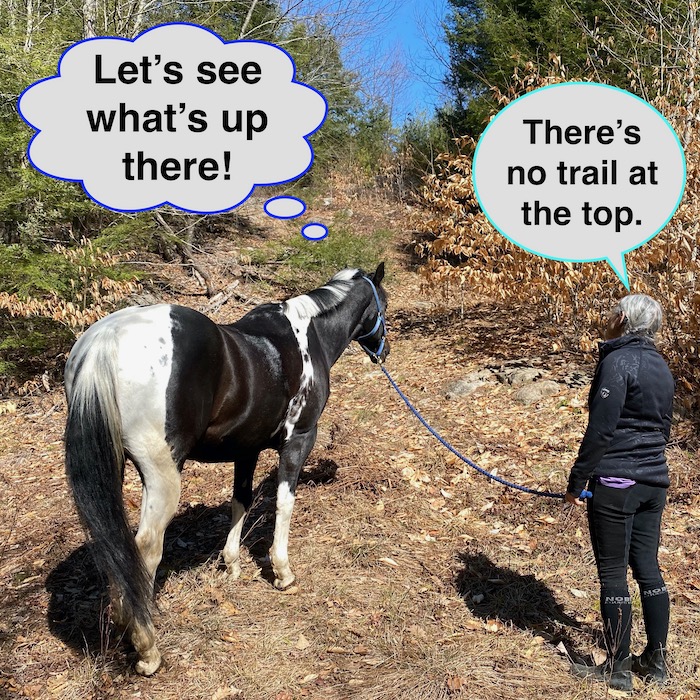 I realized that, given his druthers, Tonka would have pushed through the saplings and kept going. I really don’t know why he wanted to do this, but he clearly did. To keep us both safe I decided to turn around. 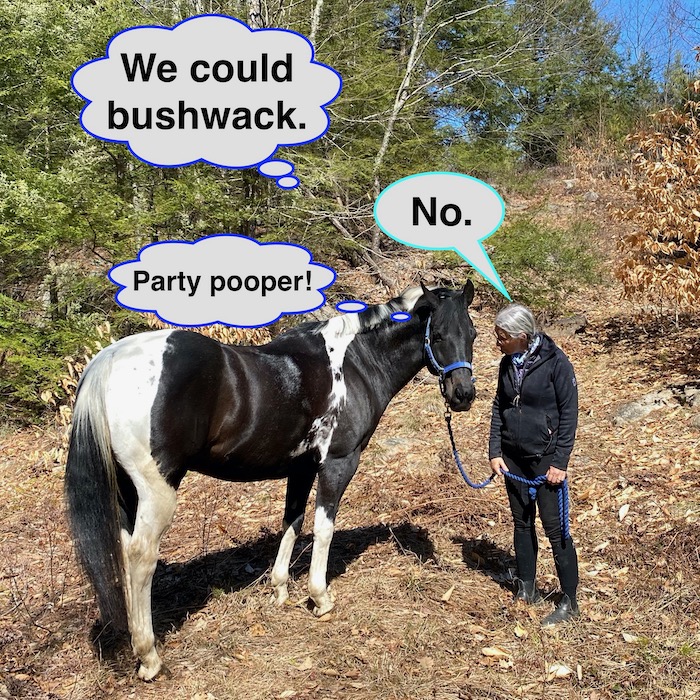 Tonka told me that the adventure was ending too soon. 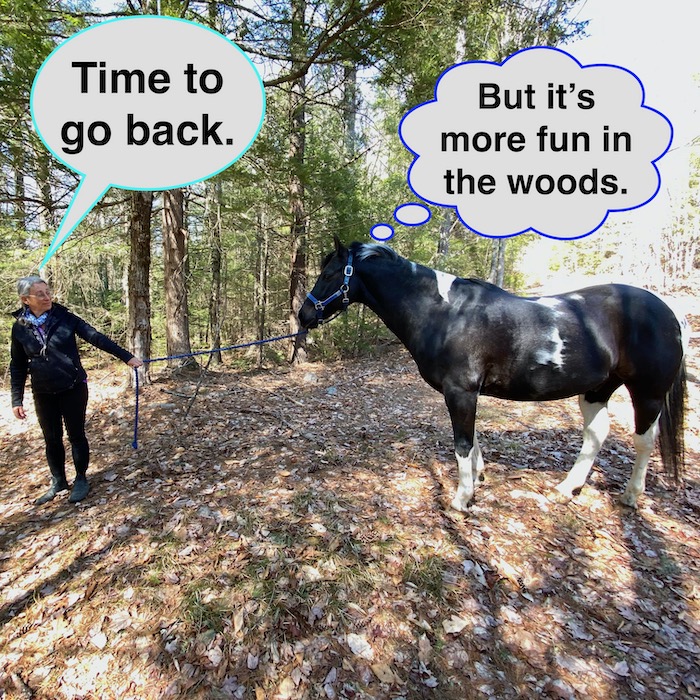 I took Tonka back the way we came. This time I led and Tonka followed. He was good-natured, but slower on the way home than the way out. 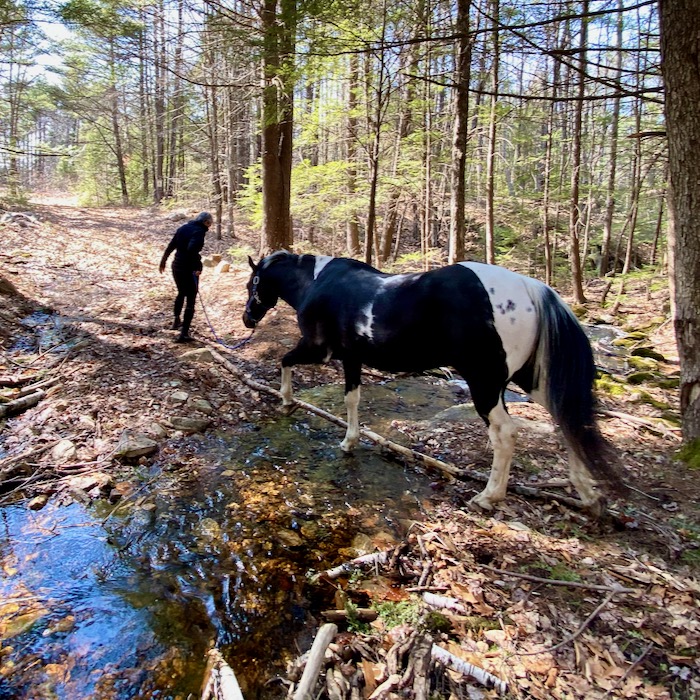 Tonka knew that playtime was over, but he politely loaded up without complaint to go to home. 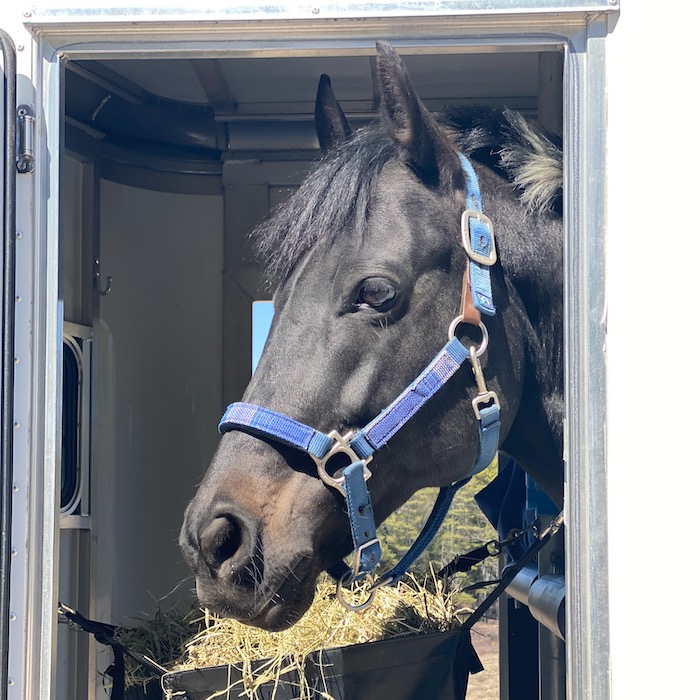 I’m still puzzled as to why Tonka enjoys exploring the woods so much when there’s a big field at Turtle Hill to graze in. Tonka was like the bear in the old campfire song. He went over the mountain to see what he could see. Not typical horse behavior. But very Tonka.

Have you let your horse take you for a walk? Where did they take you?

4 thoughts on “Tonka Takes Me For a Walk”