Tonka and I have a lot of fun jumping, but it’s not simply pointing him at a jump and flying over it – although he would do that! There’s a lot of technique to learn and implement. As I wrote about previously, jumping happens at the canter, and when we change direction on a bendy line, Tonka has to swap leads. He needs to do this to stay balanced as he approaches the next jump. For dressage, I’d trained him to stay on one lead, regardless of the bend. For jumping, he has to swap leads when the curve changes. It was a lot to relearn. While my trainer, Steph, has been away at horse shows for the last two weeks, I’ve been working with Tonka on simple changes (that is a term that means that you go from canter to a few trot strides and then back to canter on the other lead.) I got to show off our progress in a lesson yesterday.

Next up Steph added a jump to the exercise. For the last two weeks I’ve been diligent about breaking down the behavior, and letting Tonka know at each step when he got it right. I continually increased the criteria, so that he understood that we were working towards something. But that final piece, actually doing a swap at a jump, couldn’t happen until our next lesson (I don’t jump on my own.)

Tonka has paid attention to not only the what but also the why of what I’ve been showing him.

We did a few S-lines, where Tonka did a simple change after the jump. Then he did this! He got it! See how he changes lead in the air over the jump?

Tonka knows he got it right because of how comfortable the jump and turn were for him. He also heard Steph’s “yes!” and I’m sure he could feel me smile. Do you see that eager and pleased with himself expression after the jump? Tonka’s own sense of accomplishment is as rewarding to him as the peppermint he gets at the end of the ride. 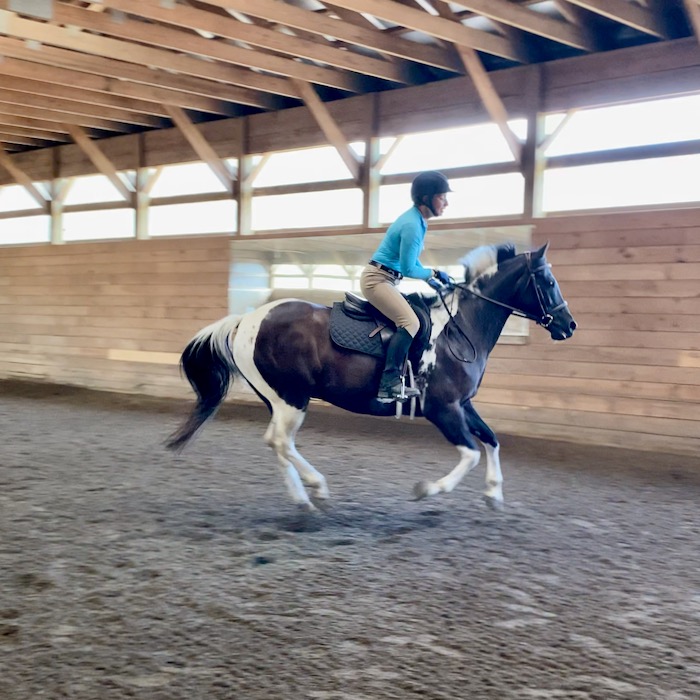 6 thoughts on “Progress on Changes Over Fences”