Thinking that I’d put my white breeches away for good, I bought Tonka to be my trail horse. But it turned out that I missed the training and fine-tuned connection that I got through dressage. I knew that Tonka would benefit from the communication that we’d find through the training. He also needed the muscles that would come from the gymnastic exercises. So after two years into our partnership, we were taking lessons and competing. 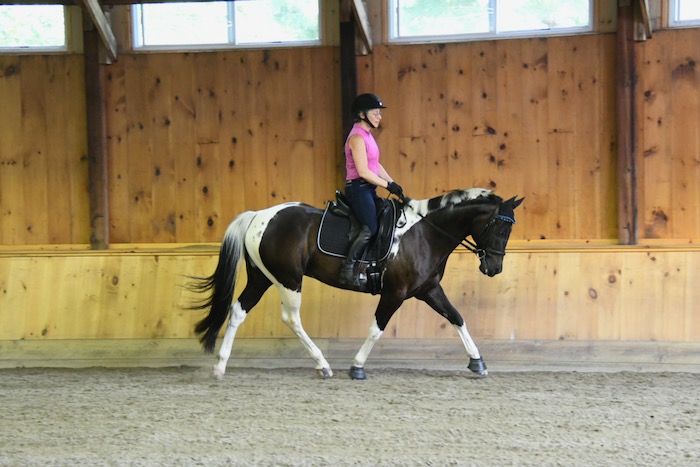 Our weakest gait was the canter. Tonka is built a tad downhill, has had sacroiliac issues and a has a smidge of arthritis in his hocks. However, with careful training, we were able to achieve a good first level canter. 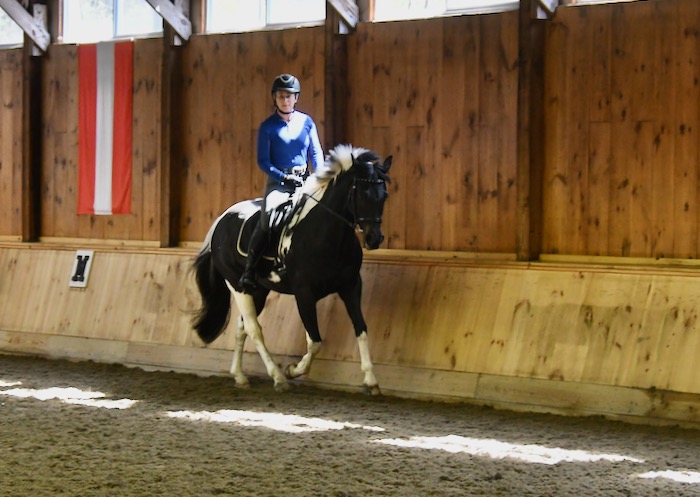 One piece of the first level dressage test is a counter-canter serpentine. This is when you ride a wavy line, but keep the bend and lead. (When horses canter, it’s a 3-beat gait – one foreleg strikes out furthest, that’s called the “lead.”) A counter-canter is tricky. The horse stays upright and balanced and doesn’t swap leads even when changing direction. 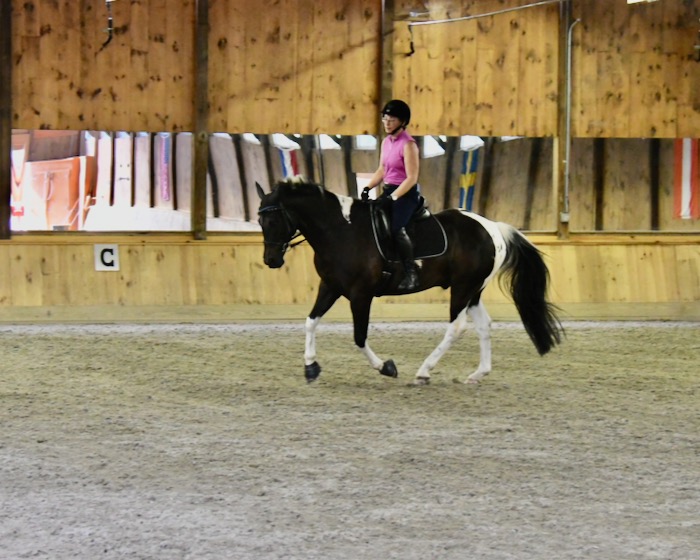 The canter has a moment of suspension when all four legs are off of the ground. A flying change is when the horse swaps leads at that moment in the air. Dressage horses don’t do flying changes until they’re rather far along in their training. Tonka and I hadn’t gotten there yet. Jumpers, on the other hand, need to swap leads when changing direction on a course. They swap leads while in the air over a jump. Now that Tonka and I are jumping, this is something that we have to do.

Horses learning to be jumpers often naturally pick up these changes of lead. It’s how the horse would move naturally. My trainer, Steph, deemed that it was time for Tonka to do more than jump off of a straight line. We’d start doing S patterns.

Because Tonka is a very good boy, he didn’t swap over the jump. He didn’t swap leads on the turn. He stayed in counter-canter like he’d been taught to do. In the more open frame of a hunter, this brings him unbalanced into the third jump.

Steph says that dressage has helped Tonka to be the good jumper that he is. Tonka moves and bends off my leg. Changes tempo with a slight change of my body position. But, in this case, the dressage is getting in the way. When I was teaching the counter-canter I was too focused on how it would be ridden in First Level Test 3. I didn’t train for variation, nor did I think about how it was a building block for other moves. By training one pattern over and over, you get a horse who is inflexible in their thinking and that gets confused and frustrated later on when you need to add complexity (for example, a counter canter into a flying change.) Looking back, that wasn’t good training, dressage or otherwise. That kind of narrow-focused training will always come back to bite you, and it certainly did in this case.

Steph is away for two weeks, which gives me the time to explain to Tonka that not all S lines are done in counter-canter. We’re starting at the basics. A curvy line at the canter, with a trot in the middle. I put down flat cones to remind myself where I want the transitions to be.

Even though this isn’t perfect, I’m not going to school this one exercise over and over! Next up we’ll do these simple changes off of a teardrop turn. Then I’ll add ground poles. I’ll reduce the number of trot strides. I’ll keep in mind the big picture. Balance. Bend. Communication from leg before hands. Clarity of the cue to canter on a specified lead. I’ll be riding this all in my jumping saddle, which keeps me thinking forward and lighter in the seat. I think that by the time Steph is back, we’ll be ready to do an S line with cross-rails.

I’ll also still be riding in my dressage saddle. But I won’t be training counter-canter in it. We’ll be doing this. 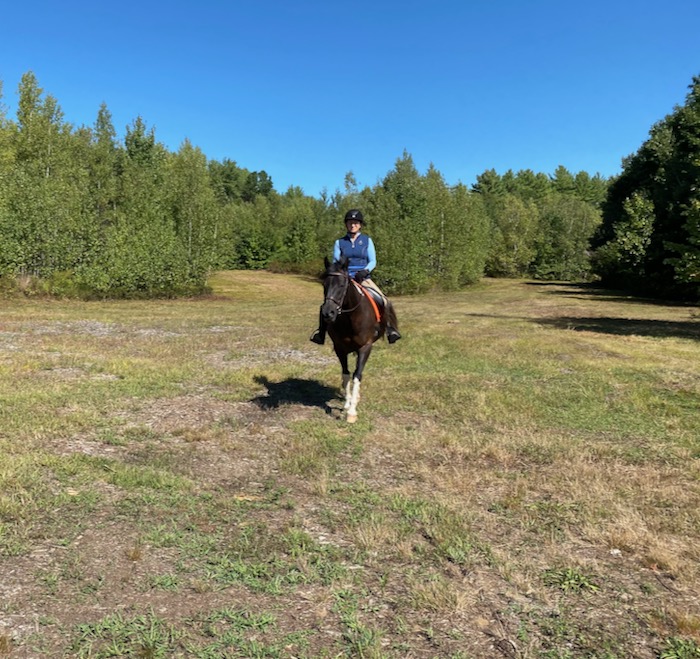 Have you switched from one horse sport to another? Had to do some rethinking and retraining? Tell me in the comments!

2 thoughts on “Training Hurdles From Dressage to Jumping”