We moved to Maine a year ago. Our house sits on a rise overlooking a beaver marsh. We named the property Turtle Hill because turtles lay their eggs here. Right now is prime nesting season. We are thrilled to see these ladies. 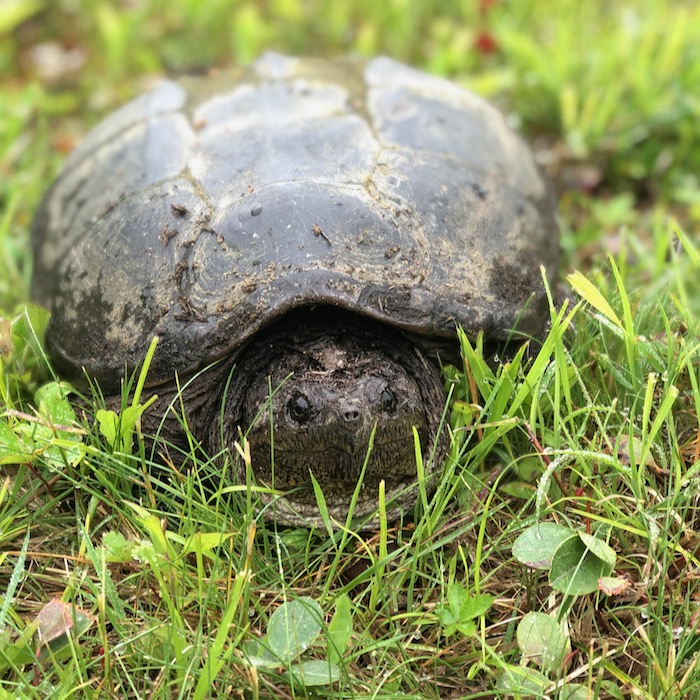 The view to the front of the house is gorgeous. The marsh continues around to the north and the view there is just as special. This is where the active beaver lodges are. 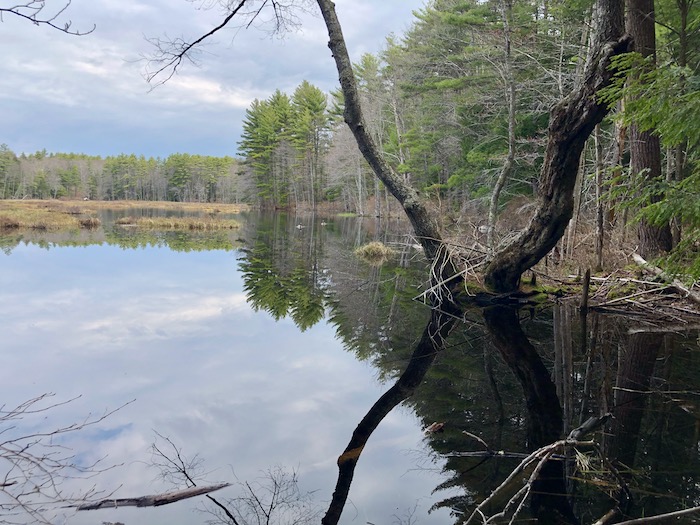 I cleared a path through the woods so that we could access that part of the property. It was a lot of lopping and whacking through brush. As long as I was doing that, I made it wide enough for Tonka. We call it the bridle path. I’ve trailered Tonka to Turtle Hill and we’ve ridden along that trail now a number of times. Yesterday the weather was as perfect as possible. The temperature was hovering near 70° F. It had been chilly at night so that there were no mosquitos (!!!) This respite from the bad bugs wasn’t going to last. It was a good day to bring Tonka back to Turtle Hill.

This is his attitude when he arrives. 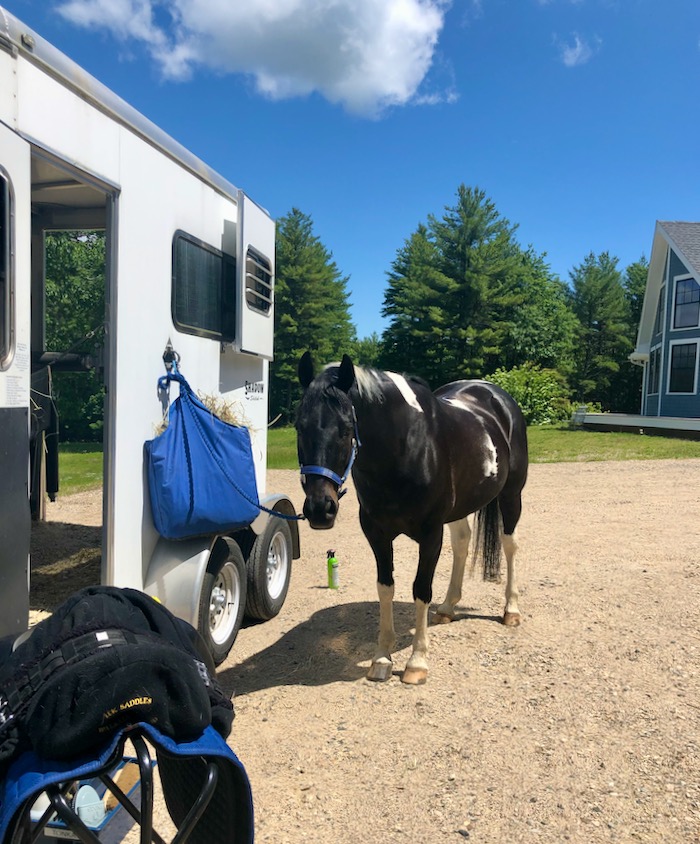 No worries. Calm and steady. But he’s also not eating from his haynet. That tells me that he’s anticipating what comes next.

We head out down the field to the entrance to the bridle path. Tonka is alert but I can still ride him on a loose rein. 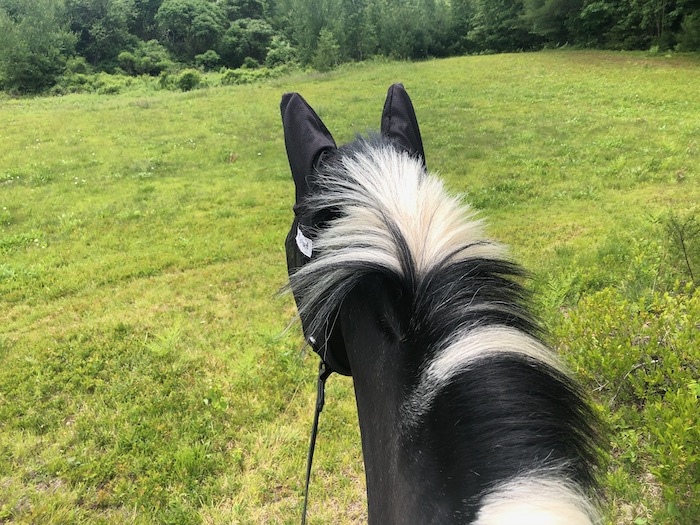 In order to ride for a full hour and get 3 miles in, I have to loop around the field and the bridle path. We do figure 8s on the trails, turn around and see the sights from one direction and then another. We did a few minutes of trot in the field, but mostly we walked.

The terrain is uneven and the surface varies from firm to soggy. There are hills and rocks and logs to step over. All of this is very good for Tonka’s fitness, proprioception, and his mind. It’s important for a horse to have to think about where their hooves are. By the end of the ride Tonka had a sheen of sweat under the saddle and white foam between his legs. He’d gotten a good workout.

For most of the ride Tonka was alert and forward, but always sane. At one point Tonka looked up at the house and neighed. Was he looking for other horses? Was he worried being on his own? He didn’t feel nervous. Maybe he was wondering where Steve was! Usually Steve helps me with the trailer and is around when we load and unload. This day he was busy.

But after I rode, Steve did have time to hold Tonka’s lead while I went into the house to get a snack. 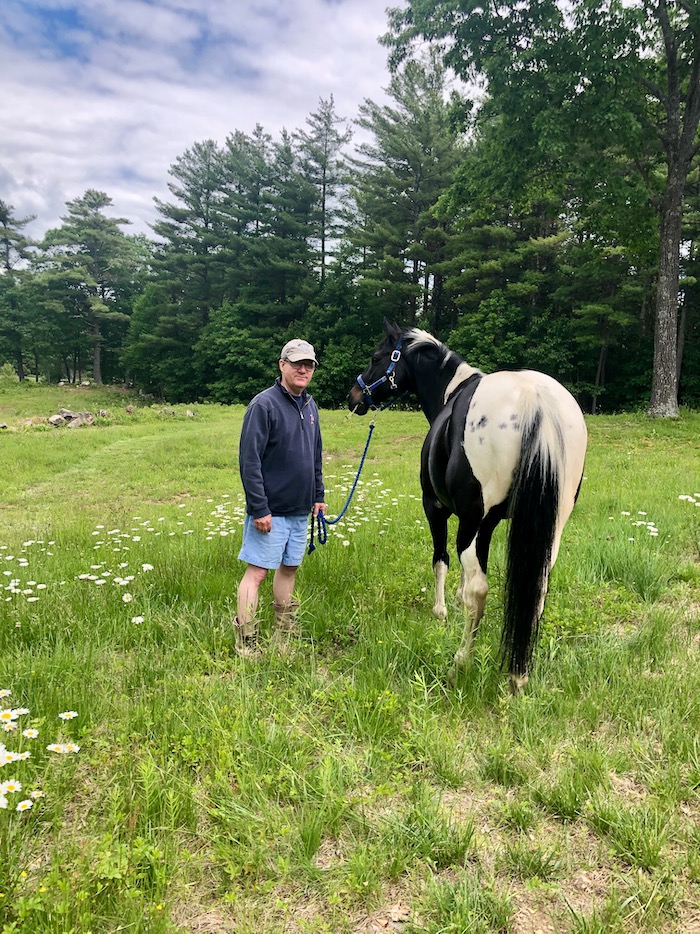 Tonka had what one thinks that every horse wants and focuses on. Tall, delicious grass. 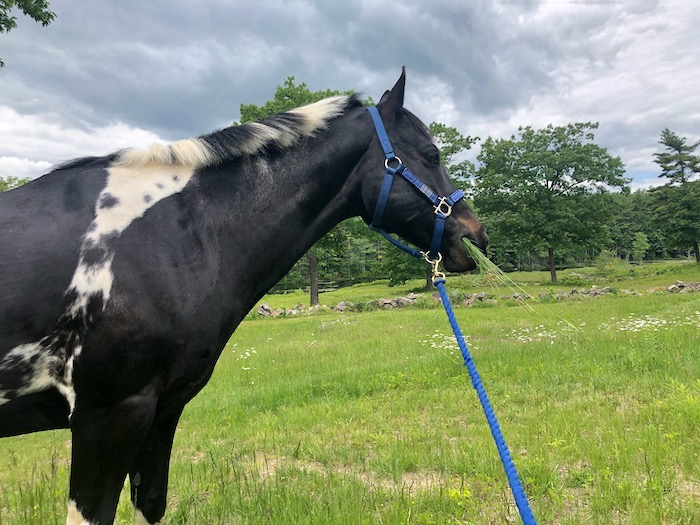 And yet, when I came out of the house not more than 3-minutes later, those two were nowhere to be seen. I called Steve on his cell phone. He told me where they were. 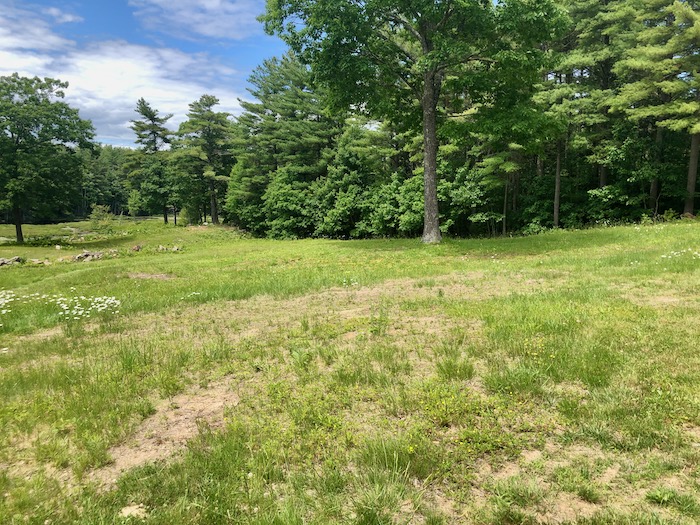 Like the last time that I had left Steve and Tonka on their own, Tonka took Steve into the woods. (This story begins here.) This time Steve had a firm grip on the lead rope. Steve could have stopped Tonka, but he was curious about where Tonka wanted to go so let my horse lead him on. Tonka walked purposefully, and one might say cheerfully, to the vantage point that offers the best view of the north side of the marsh. We’d already ridden past it four times that day, but I guess that Tonka wanted to go back. He stopped and looked. He munched on some lichen. He looked some more. Tonka wasn’t tense. His nose wasn’t flared. It seemed as if he was sightseeing. Do horses appreciate a beautiful and interesting view? Tonka seems to.

Most horses don’t get to see beautiful views. They have their home barns, the riding ring, maybe the same path around the farm. Maybe they go to shows which are busy and filled with other people and horses that one has to sort out. Perhaps our horses are missing out on quiet contemplation of beautiful scenery? Tonka seems to be telling me that. Has your horse told you the same thing? On a trail ride when you stop to look at a view do you notice your horse also taking it in? Does your horse have a favorite place to stop and think? Tell me about it in the comments!