One of the things that has held Tonka and I back from going up the levels in dressage has been the recurrent comment from the judges on our tests: needs more energy. He does the patterns correctly, precisely and with a willing fluidity. But my horse just hasn’t had that engaged energy that he needs to be a successful competitor beyond First Level.

When we moved to Maine last summer, I ended up in a hunter/jumper barn. Going over poles is good for a dressage horse, so I started taking lessons. Mostly we trot and canter ground poles. I had no intention of actually jumping, but Tonka had other ideas. You could tell that he was eager to do more than poles on the ground, so in a lesson in October we tried cross-rails. In November we went back to only doing poles, with a focus on being able to canter a course of them. I had one lesson in December, in which we did five cross-rails. Tonka jumped BIG and it was decided that if were to keep this up, I’d need to ride in something other than my dressage saddle.  At the beginning of January I borrowed a jumping saddle, did the requisite poles, and then we went over five little cross-rails. Yesterday we had a lesson, again in a borrowed saddle. We started out over those ground poles but Tonka knew what was coming.

From the get-go he was full of beans. Tonka was impatient for the real jumping to start, so he leapt over the ground poles. 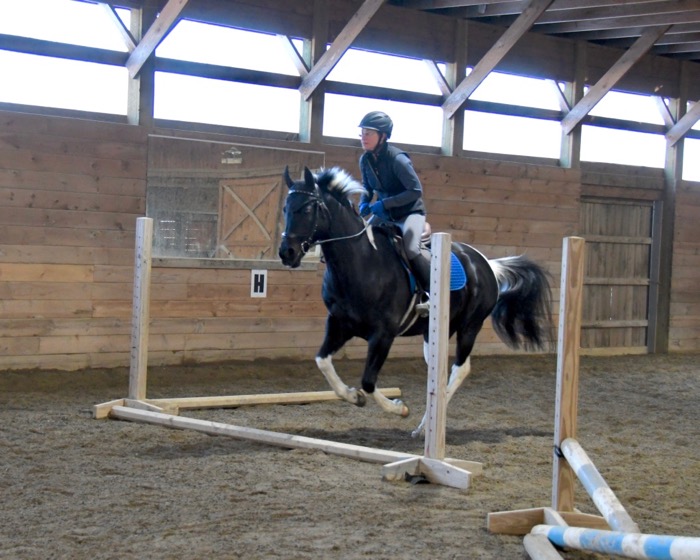 When I tried to explain to him that jumping wasn’t yet the thing to do, he disagreed. 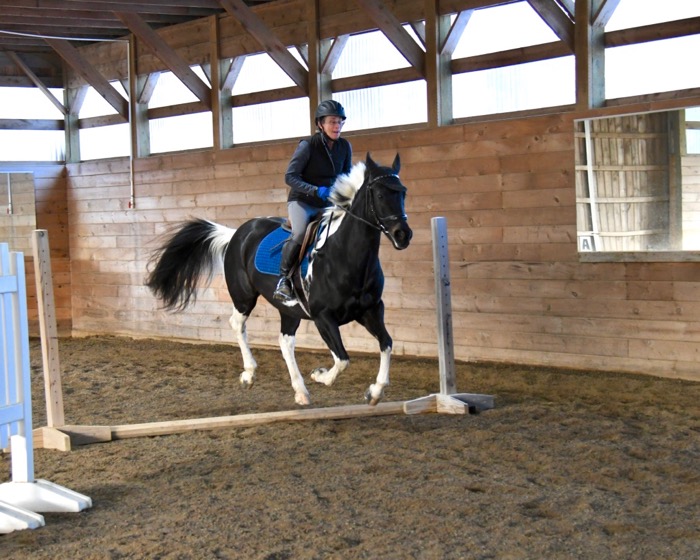 I eventually did convince him to canter over the pole without leaping. 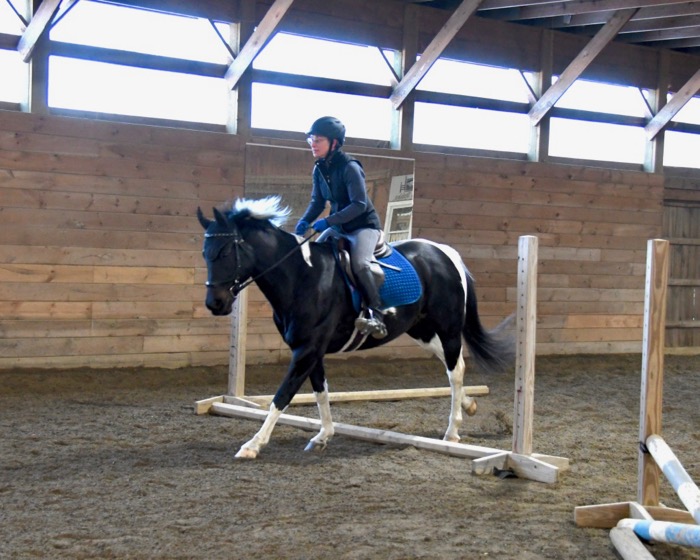 But this seemed to rev his engine. Doesn’t he look light on his toes? 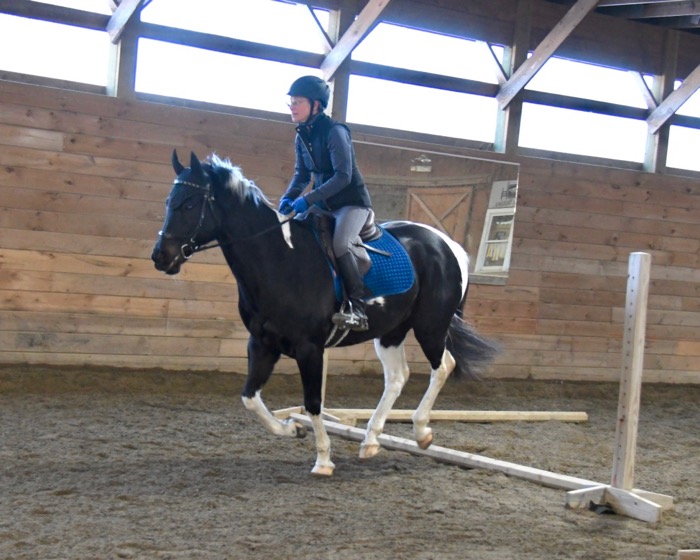 When I finally pointed Tonka at a “real” jump, I swear I could hear him say Yay! 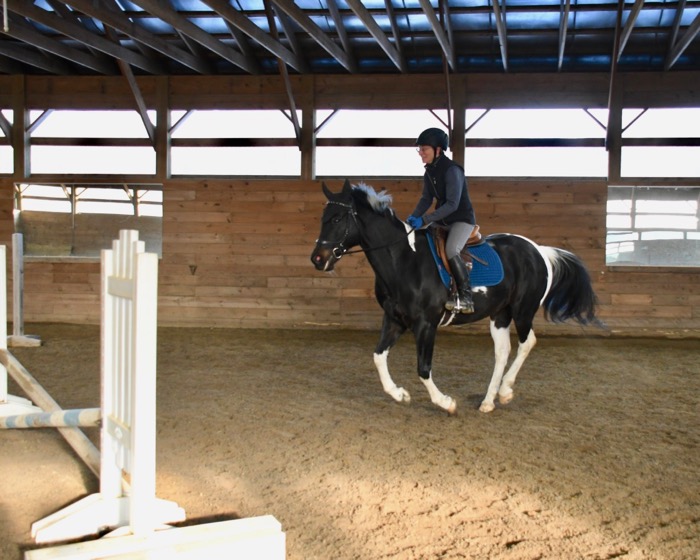 He was, perhaps, a tad too enthusiastic, but I managed to stay balanced on him! 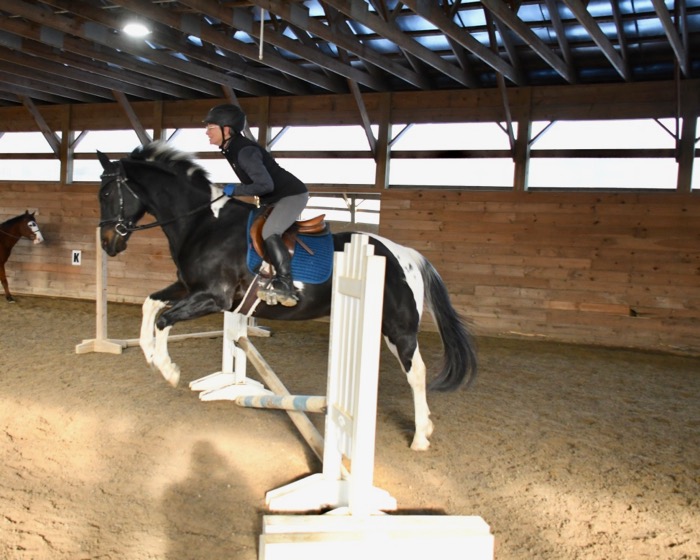 When I pointed him at the jump again, Tonka was a bundle of controlled energy. 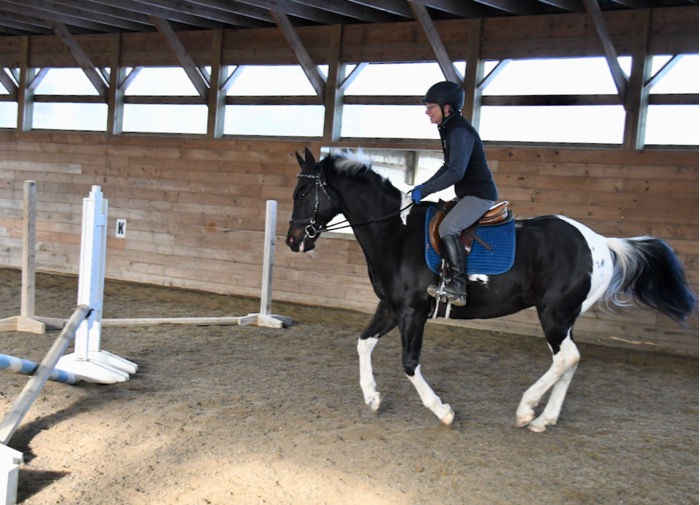 My trainer says that he’s a natural. Without much guidance from me, Tonka heads to the center of the jump and places his hooves perfectly for take-off. I’m trying to stay out of his way and off of his mouth. Tonka would appreciate that.

His enthusiasm makes us laugh. 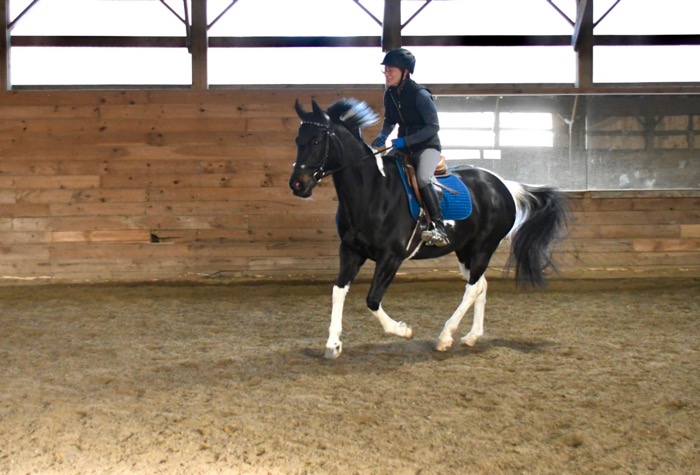 I’ve been a dressage rider for forty years, but riding is a sport that involves two. Right now, my partner is telling me that he wants to jump. Honestly, I didn’t see this coming and I’m a bit out of my comfort zone. But, as I said, Tonka’s jumping seems to make everyone happy. Including him. And me. So, we’ll jump!

Has your horse led you to activities you hadn’t planned on? Tell me in the comments!

11 thoughts on “Full of (Jumping) Beans”