It’s drilled into us dressage riders to go forward.

Sometimes, though, in order to get those big strides, we have to slow our horses down first because impulsion can’t come without balance. Tonka is a case in point. His front end and his hind end go at different speeds.

Tonka has a big shoulder and it’s easy for him to pull himself forward by reaching out with his front legs, while taking short steps behind. When I first get on, going like this is his natural inclination. (Sorry for the murky photo – we were riding at dusk.) 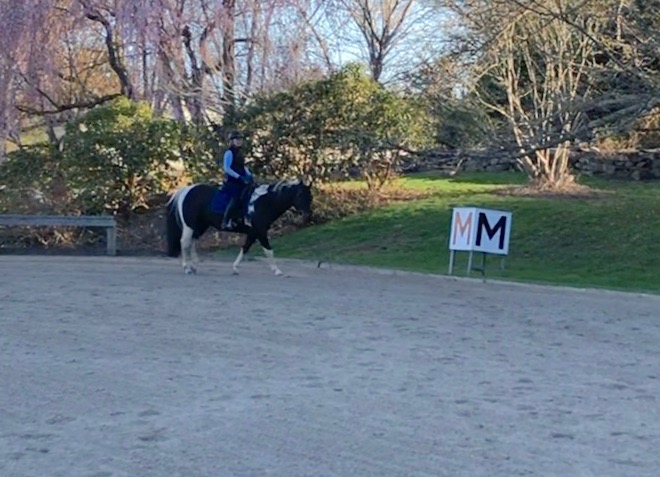 Simply slowing down his front end results in a not very pretty picture. Hollow back, thick under-neck, and he’s still not marching all four hooves to the same rhythm. 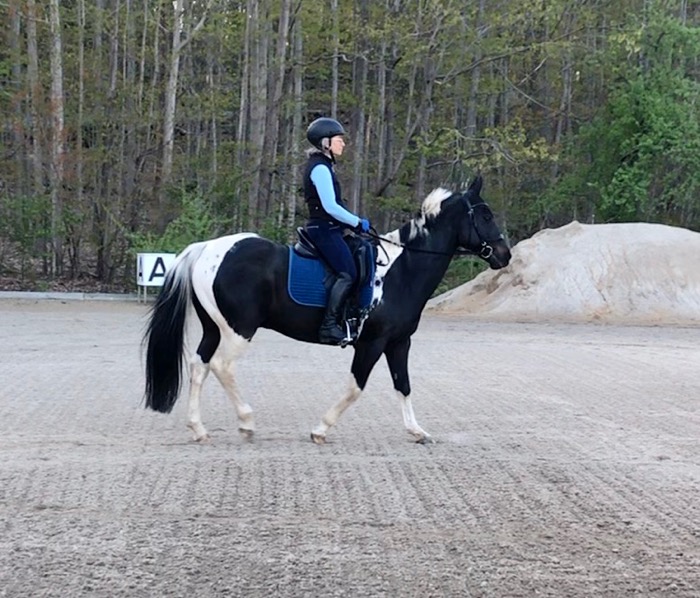 Trying to correct that ewe neck with hands that insist on arc and bend, while driving his hind end to work more, also isn’t successful. Now he’s tucked in, and his hind legs can’t keep up with the front, so they get over-extended and the toes drag. 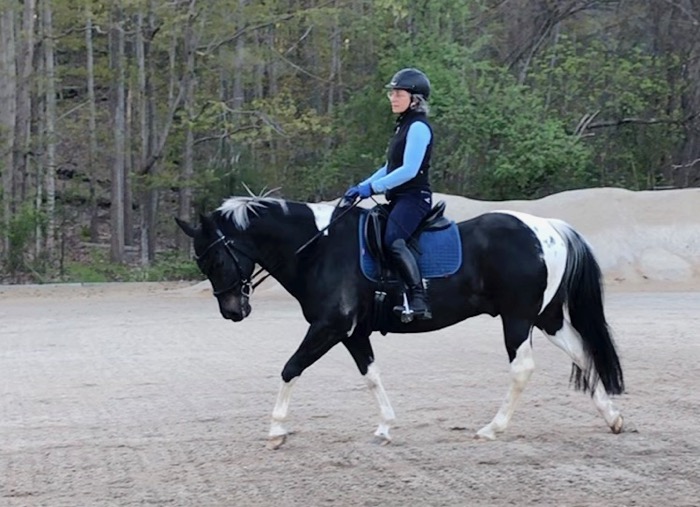 What does get Tonka in balance is for me to communicate with a still seat that I want him to take smaller steps. Quiet hands, closed thumbs, soft ring fingers, and elbows that follow his movement, support Tonka, so that he can carry himself across his topline instead of diving forward onto his shoulder. 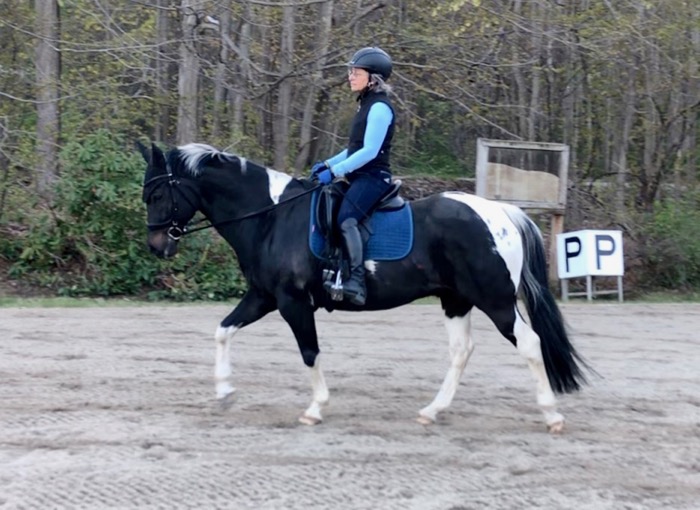 Success isn’t seen just in his withers that have come up to me, but also in that expression on Tonka’s face. This is what you want? he says. It feels good! From there, Tonka is eager to add more oomph to the walk, while still able to stay in that even four-beat rhythm.

Once the walk is established, we go through the same process at the trot. Here Tonka almost has it, but he’s too fast, and although we’re on flat ground, it feels to me like we’re heading down a slope. 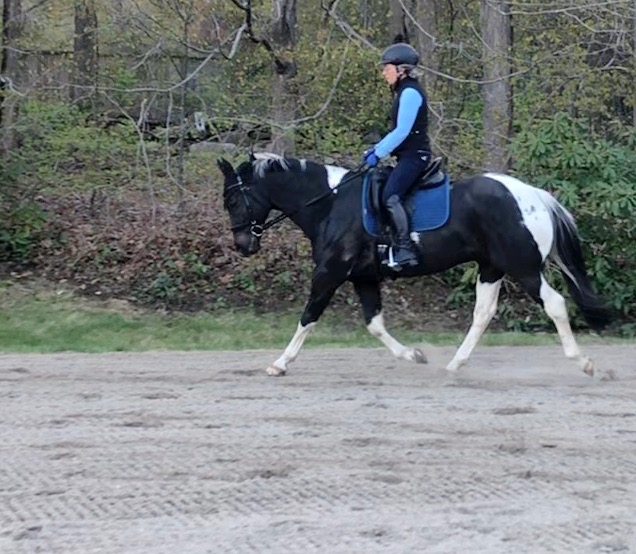 If I slow my rise just a tad, sit up just a bit, bring my elbows back just an inch, and have the cadence that I want in my head, then this happens. Now the hind hoof hits the ground at the same time as the fore. Tonka’s topline is level, his head is up, and I feel plumb in the saddle. 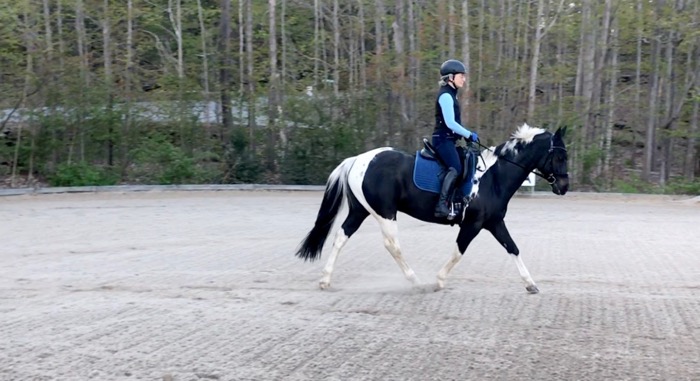 Of course, it’s not only my position that gets Tonka into balance. It’s a process. There are half-halts (which is when you momentarily slow down to re-balance the horse, then resume the pace.) There are many, many transitions (walk to trot to walk; trot to walk to trot; walk to halt to trot…) There is also getting out of the ring and onto the trails to build up muscles (and for mental breaks!)

The walk and trot are coming along quite nicely. That leaves the canter. Tonka is especially unbalanced at this gait. He always has been. This photo shows how little articulation Tonka has in his hocks, and how slow they are compared to the over-reaching front legs. This puts his weight on his forehand, which strains those legs, something that could cause lameness later in his life. So, exercises to get him to have more canter ‘jump’ aren’t just to be pretty! 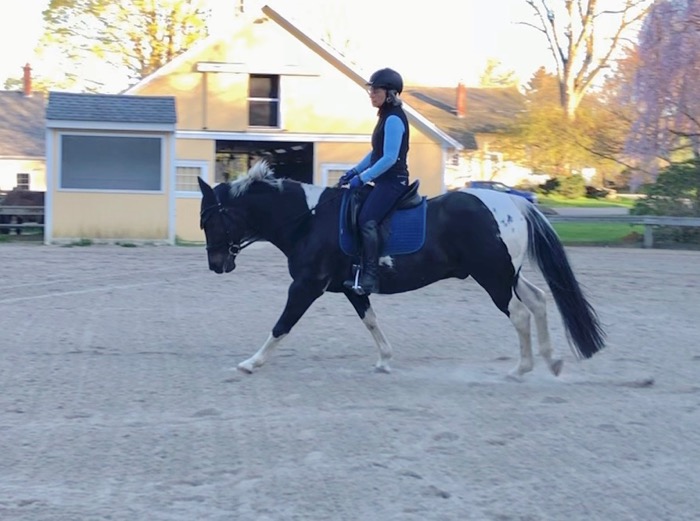 However, Tonka likely has been moving heavy on the forehand for his entire life because of underlying issues. Each time Tonka’s sacroiliac pain cropped up, it was when we were attempting more advanced canter work. So, as we go at this gait, I will be very cautious about increasing the criteria. Right now if I ask Tonka to slow at the canter, he falls into the trot. That’s ok. We’ll work with that and do easy, open-framed, canter-trot-canter transitions. I’ll give him time to find his balance. I’ll give his body time to get stronger. Yesterday Tonka figured out how to get all four legs in sync at the canter. For three strides he slowed, his forehand came up, and his hind legs quickened. I said Good Boy! transitioned to the walk, and he got a peppermint. It’s so important that when those good strides are new and few, that the horse knows they’re the goal and that they’re appreciated.

I hope that even if you’re not a dressage rider, that you’ve made it through this post and are still reading! Because there’s a bigger picture here. Although I have a goal of getting back into the dressage ring with Tonka, what’s really important to me is that my horse can move comfortably and in balance when I’m on him. It’s only from that point that I can get to the thrilling part of riding – being seamlessly in sync with my horse. The next time that you get on your horse, notice what all four legs are doing under you. Does your horse move in an even cadence or does he rush with one end or the other? Does your horse pay attention to where you are and try to get in tune with your body? What you observe is your starting point. Let me know what you feel in the comments!

6 thoughts on “Slowing Down To Go Forward”