I use food rewards when training, but not in all scenarios. Here’s why.

I train by identifying the behavior that I want, setting up scenarios that make it doable, and then rewarding the animal when it happens. I want to be able to get that behavior numerous times, the more rapidly that I can reinforce, the stronger the behavior becomes. With many species, food is the preferred reinforcer – it’s fast to deliver (unlike, say, a belly rub) and highly desired. Dogs are so easy to train with food – they’ll gaily work for a piece of kibble the size of a pea, and they’ll bound around, in the game, ready for more. But food isn’t always the right choice, especially not with horses. It’s not that they don’t want treats, in fact horses are quite food motivated. But horses aren’t dogs. Dogs love the chase. Running down that one small treat is almost as enjoyable for them as eating it. Horses have a different relationship to food. They need to eat constantly. If they don’t they’ll develop ulcers, which cause pain, which cause associated “bad” behaviors. In a natural environment, food is always at their feet and they meander slowly as they graze. However, most of our domesticated horses don’t have the luxury of living on pasture 24/7. They’re fed at set times, in a set place, and there are long waits between meals. So, when a person arrives with a pocketful of treats, their horse doesn’t necessarily want to have to perform to get that food. The horse does exactly what they’d do to another horse in a situation with limited resources – they display body language that says get out of my way. And that can be dangerous.

I’m not saying don’t use food rewards! I train my horse, and others horses, with treats. Ask Tonka. I’m generous with peppermints (and apples, carrots and a ridiculous amount of expensive bagged treats.) When delivering treats is paired with a knowledge of behavior science, their use can be exceedingly precise and effective. But treats aren’t right for all horses nor all owners. It takes skill, timing and observation on the part of the person dispensing them, and it requires a horse with self-control. When those criteria aren’t met, feeding treats can lead to pushy, mouthy horses, horses that paw in the aisle and that knock you with their heads. That bite. That kick. There’s a reason why so many trainers tell their students not to use food. If you dismiss those voices without recognizing the issues that treats can cause, then the bigger message of training from the perspective of positive reinforcement won’t be heard. That said, owners can be trained how to dispense treats safely. Horses can learn how to patiently wait for the food delivery. Doing that training is worth it, not only will you have a very effective tool in your training toolkit, but you’ll have an enriched relationship with your horse. For some horses, though, this training is especially challenging. Some horses have a history of deprivation (or are currently in situations with limited forage) that makes them aggressive when offered food. Nate is one of those horses.

The stable where Nate now lives provides him with a healthy environment, but it hasn’t always been like that. Nate’s owner, Eileen, investigated his history and found out that he was often hungry The arrival of food still triggers anxiety. Even when grazing Nate doesn’t relax. Instead, he moves from spot to spot, tense, as if the grass will disappear at any moment. We also know that people in Nate’s past hit him. Under such conditions some horses shut down and become listless. Not Nate. He became defensive. He’ll bite and rear if he feels threatened. If I move a hand in a way that makes him think I’m going to touch him, he gives me this look: eare pinned, whites of eyes showing, brow bulging, nostrils pulled back and wrinkled, and tense lips. 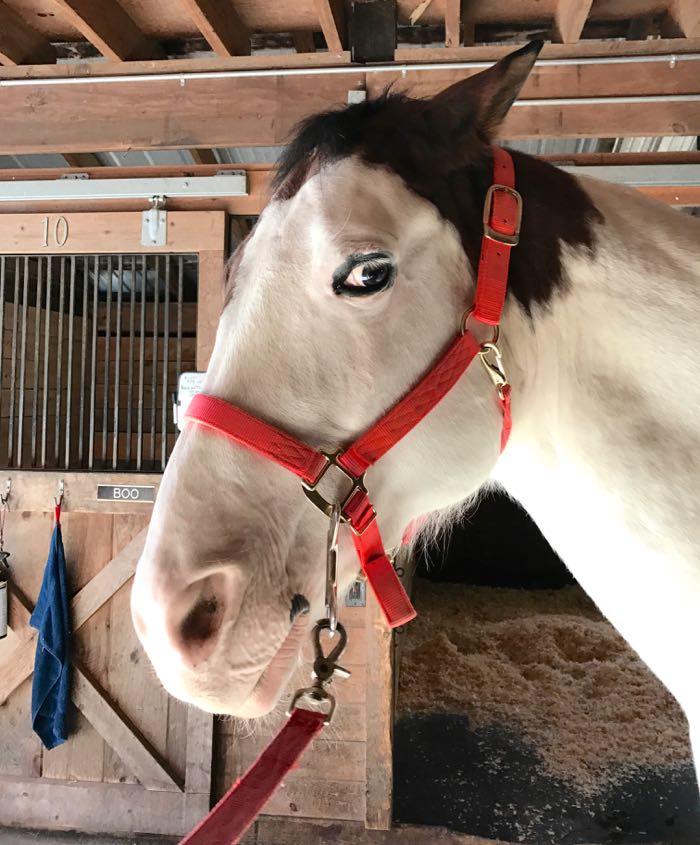 Nate is actually a sweet horse. Sadly, communication like this was the only way that had been effective for him.

Dogs love the anticipation of getting a treat. My dog is enthusiastic about doing a trick, knowing that a reward will be tossed when she’s done. She’ll even do an entire repertoire for one tiny piece of cheese. Nate has a different reaction: frustration. Because of Nate’s experience with hunger, not getting food right now when he knows it’s there makes him angry (as evidenced by the pinned ears, the threats with his teeth, the clenched tail.) Even the smell of an apple that isn’t handed over as soon as he gets a whiff of it causes him to jab his head at the bearer of the food. He doesn’t understand delayed gratification. So we’re teaching it to him.

While in his stall, with the door guard up, Eileen shows Nate her closed hand, which holds a bit of boring pelleted feed. When Nate has a moment of relaxation and stillness, she opens it and he gets to eat. 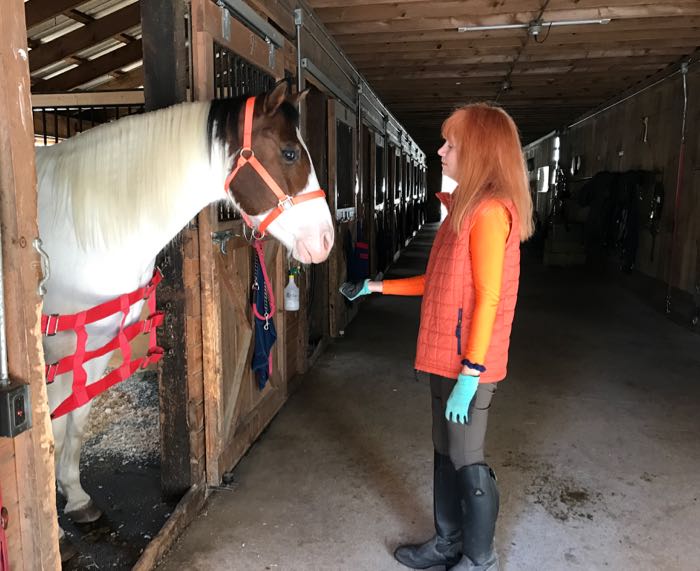 He’s learned quickly that being pleasant not only gets him what he wants, but is a much better way to live one’s life. How much nicer it is to be relaxed than holding oneself in a threatening posture all of the time!

However, although in his stall Nate has become safe to be around, this behavior will take time to transfer to other places. Even doing the same exercise in the barn aisle is a challenge for him. In the aisle he can’t walk away when feeling stressed. Of course, Nate can’t stay in his stall all day, he needs to be turned out, hand-grazed, and exercised. But with Nate’s tolerance for frustration being so low, those interactions can be dangerous. Something that triggers his defensive aggression can be as seemingly inconsequential as Eileen changing pace and walking a bit faster when leading him. When stressed he swings his head to bite. We’re working with him to teach him more tolerance for handling. We’re making our interactions non-threatening and rewarding. We’re teaching him to walk with his nose straight ahead and with his head parallel to Eileen’s shoulder. It’s possible for me to train Nate to do this using food (and a clicker) – I have good timing and know how to read the nuances of his body language. But it’s not safe for Eileen. Nate is one of the fastest learners I’ve ever worked with. Do something once and he’s got it. That means that if you click and reward at the wrong moment, you’ll quickly teach a behavior that you don’t want. I work with Eileen and Nate only once a week. I needed to come up with things for them to safely do between our sessions.

Food rewards anywhere other than the stall are out. If Nate even smells food on Eileen, he can think of nothing else. I don’t blame him. A horse that was once food deprived finds it hard to focus when food is just out of reach. But there are other things that Nate finds reinforcing. He adores Eileen and he gets comfort from being with her. I’ve watched him move closer to her for reassurance when worried. He loves Eileen’s voice and kind mummerings of good boy. I’ve also noticed that Nate enjoys patterns with an understood purpose – he was bred to be a working cow horse after all!

I set up cones. 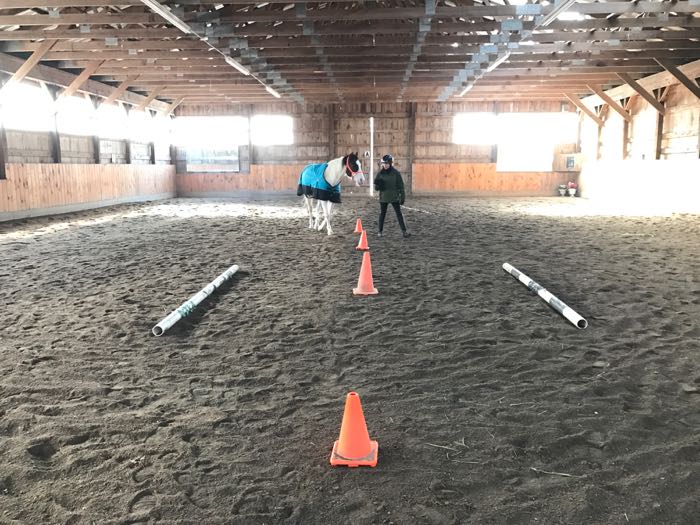 The end goal is for Nate to thread his way through the cones, on cue, like a dog doing poles on an agility course. For now, they are walking side-by-side, at liberty, no lead rope. Nate immediately got it and even after several repetitions didn’t tire of this exercise. He walked politely with nose straight ahead. Look at that relaxed eye. 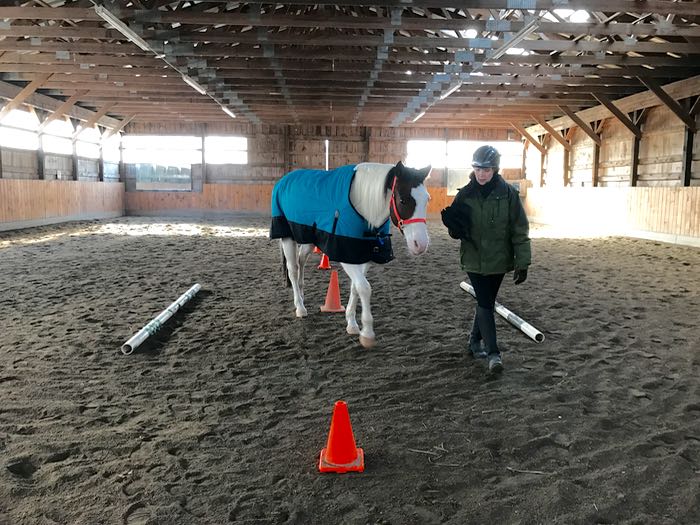 The more they do this, the more this calm demeanor becomes his new default. This sort of interaction is highly reinforcing for both of them, no food involved.

At the end of this training session, Nate even invited me to scratch his nose, which, it turns out is his sign of friendship and happiness. I don’t have a photo of that moment, but I do have this. 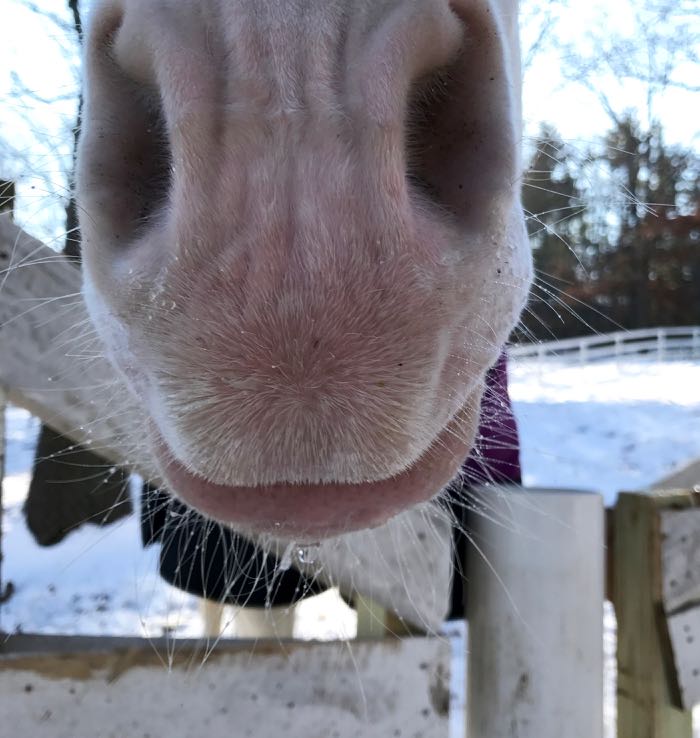 Note: We’re making a few changes in Nate’s feeding schedule. He already has slow feed hay nets in his paddock, he’ll now have one in his stall, too. This will extend the time that he spends eating. Before training sessions, he’ll be given a flake of hay in his stall and 15 minutes to relax and munch. We’re trying a supplement to soothe his tummy. If that works I’ll tell you about it. Eileen will discuss with her vet whether we need to investigate the state of Nate’s digestive tract. In the meanwhile, Eileen and Nate continue to work on his self-control around food in the stall, and relaxed, compatible experiences outside of it. I see changes already. Nate no longer curls his lip in a threat when he sees me!

Note: I’m grateful to Eileen for allowing me to share her and Nate’s story.

13 thoughts on “Training With Food – Sometimes”