My ancient little dog, Scooter, likes his routine. Wake up at 7:15. Go out to his potty area to pee, come in, eat a little, go back out to poop, come in. Nap. Have a meal later in the afternoon. If the weather is nice, sunbathe on his ramp for a few minutes. Come back in. Nap. Have a walk out the front door through the mowed field. To exactly the same place every time. Sniff a bit. Come back in. Watch us eat dinner. End the day on the couch with me.

Lately something has disturbed that schedule. Scooter looks out the back door to his potty area and his hackles go up. He hesitates. 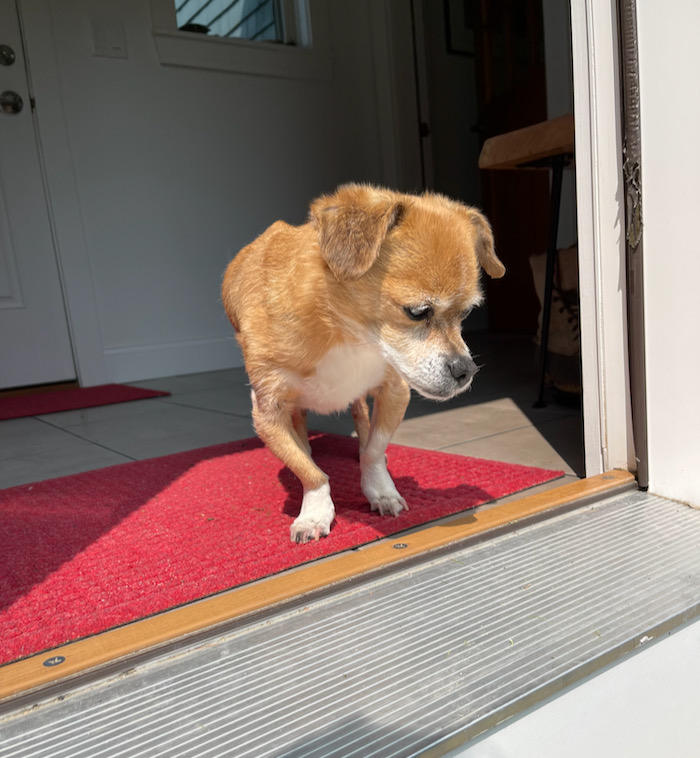 I convince him to go out for a quick pee. Scooter refuses to poop out there, but instead asks for his walk early (I know what he wants by which door he looks at.) He does his poop time out in the field. 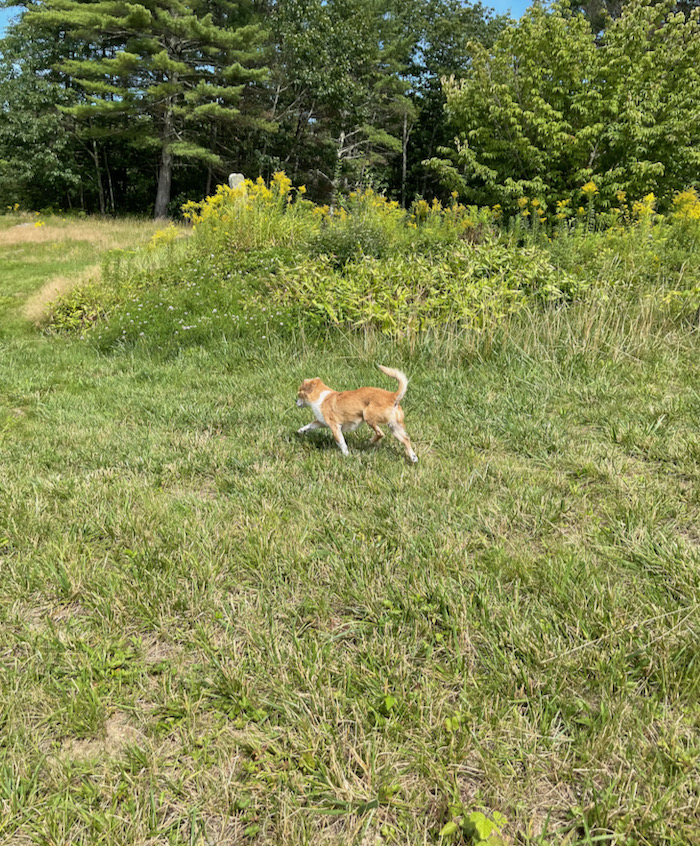 Scooter has never been particularly aware of his environment. That was always Good Dog Lily’s job (see this post to read about the best farm dog.) Lily was hyper-vigilant. Scooter was her side-kick. When she died (a few years ago at the grand old age of 15), Scooter did not believe that he now had to do her job. Napping and couch time was fulfilling enough. So, when Scooter let me know that something had changed outside, although I didn’t see, smell or hear anything, I paid attention. Yesterday I finally saw what Scooter already knew.

This gentleman came lumbering along, ate the clover, laid down in the grass, 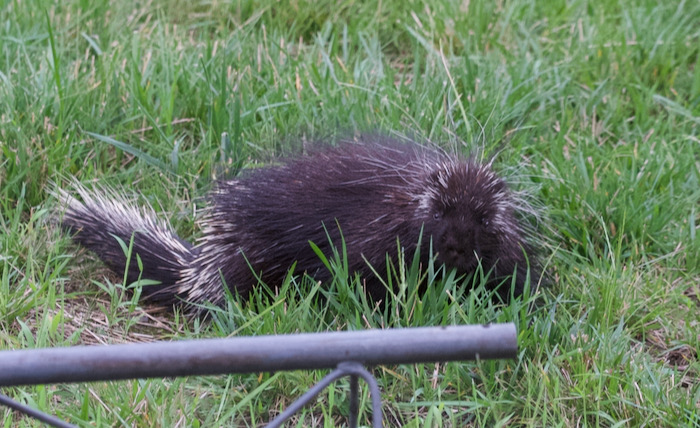 and then circumnavigated the fencing around Scooter’s potty area. 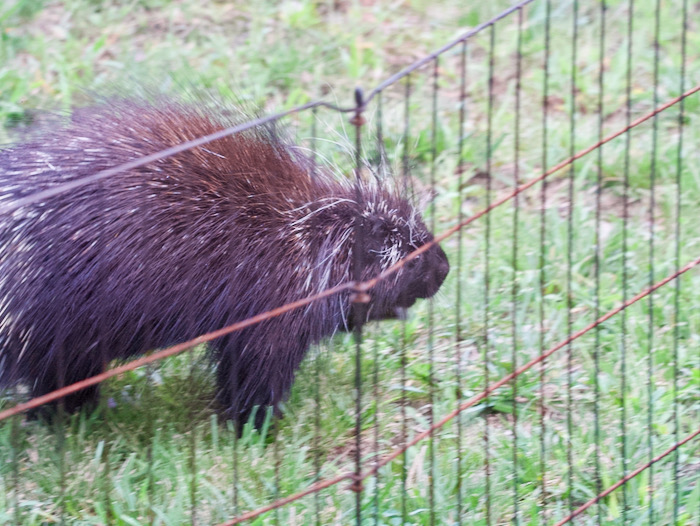 Not much later, we had another gentleman caller. Smaller. Quicker. Younger. He, too, skirted right past Scooter’s fenced yard. 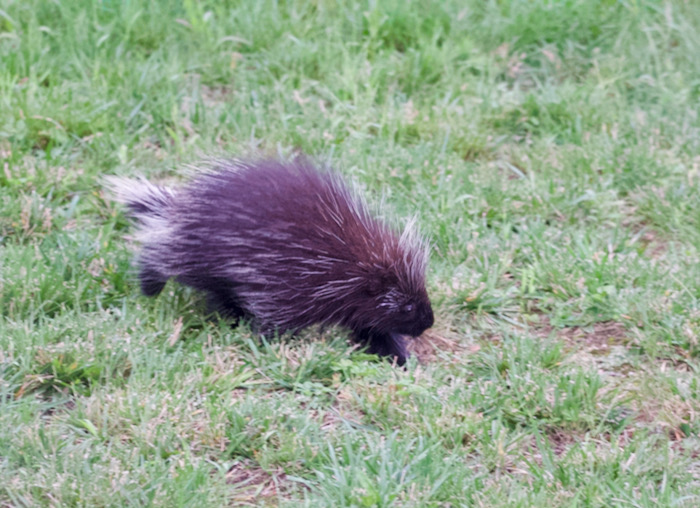 Meanwhile, a tad earlier in the day, these two were out front, eating their greens by the driveway. That’s mama Hattie on the right and the fast-growing Thistle on the left. 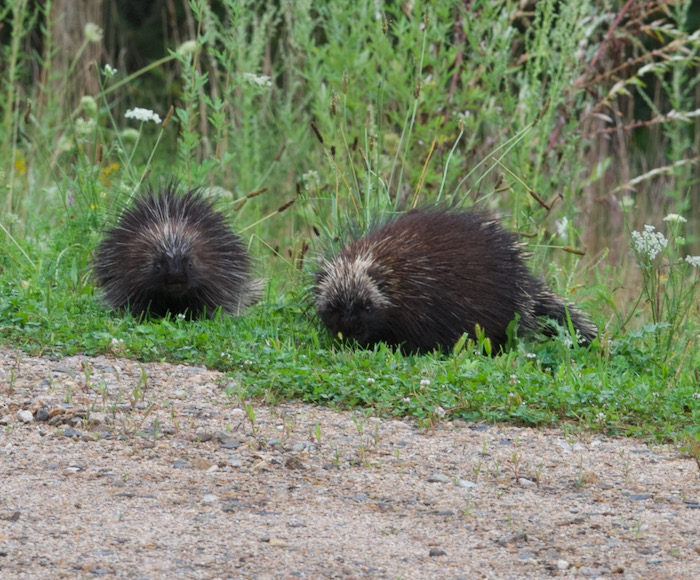 They look as if all is normal, but it’s porcupine breeding season when the males travel to woo the females. There will be vocalizations, posturing, and possibly showdowns between the guys, but ultimately it will be the female’s decision about who will be next year’s baby daddy. Thistle is still too young to breed, so she’ll be staying out of the way of this drama.

Scooter would also like to stay out of the way. He’s already had an encounter with a porcupine quill stuck in his paw (terribly bad luck, it was loose on the ground and he stepped on it.) I’ve read that the males get especially stinky during mating season. Also, copulation entails peeing on the female (it gets her hormones going.) No doubt Scooter has been smelling the precursors to all of that and knows that those male porcupines are hanging out in his backyard (Scooter doesn’t mind Hattie who feeds in the front.) So, until the males go back to their solitary lives, I’ll be indulging in Scooter’s need to change up his routine. To keep the little dog out of harm’s way, I’ll be vigilant about being aware of where the porcupines are. I’m not as good at that as Lily was, but I’ll do my best. I’ve mowed Scooter’s path so that I have a clear view of his daily constitutional. I so enjoy watching our quilled neighbors, but these are animals best seen from a distance!