Last week Tonka’s veterinarian, Monika, and her vet tech in training, Sara, came out to do some work on him. Tonka was due for maintenance to keep his body functioning well: shockwave over his back, and hock injections. Because Tonka recently has shown signs of that intermittent left-front lameness returning, flexion tests were done and x-rays taken. Although angles and bone health in his front hoofs were ideal, something was bothering him, so we decided to inject the coffin joints to improve the joint fluid and ease any inflammation there. There was lots to do! Monika and Sara spent most of the morning with my horse.

He is so good.

What a good boy.

That was gratifying to hear because Tonka’s relaxed behavior during veterinary visits is due to training. I’m fully aware that veterinarians are in an extremely dangerous profession. In 2014 in the UK, being an equine vet was deemed a more risky job than firefighting, perhaps even one of the most dangerous jobs of all, and so I consciously and proactively train for calm acceptance of handling of all sorts.

Tonka has an innately sane personality, but that doesn’t mean that he won’t react if he feels threatened, or if he’s sure that something about to be done to him is not nice. He’s broken cross-ties and thrown his head into the rafters when apprehensive about handling. It’s a reaction that can hurt him and the people around him. You can’t train a horse when they’re already in that fear zone, and since they can leap into that panicked emotional state quickly, the training needs to happen before it’s actually needed. I do it on a daily basis. To keep Tonka and his caregivers from harm I teach him that staying calm is the best strategy and that good things happen when he is amenable to all sorts of handling.

One place to start this training is in the aisle where you groom and tack up because this is also usually where vet exams happen. I’ve taught Tonka to stand quietly, and to ground tie. He knows that if he doesn’t budge and if he has relaxed body posture that good things will come his way (like carrot coins.) I’ve taught him to square up (vets often want the horse to be standing evenly on all four.) I’ve taught him that poking and prodding also leads to good things. You can’t train for specific noises and procedure that the veterinarian does (for example the shockwave machine is loud) but you can train that if something startles your horse, that an immediate return to that calm stance is rewarding.

Sometimes veterinary procedures aren’t pleasant. Some of your horse’s trust in you will be eroded when things are done to them. If your trust account with your horse is full that usually doesn’t have lasting effects. Tonka, however, is a horse that makes connections, and he also doesn’t tolerate things that aren’t nice. Like nasty tasting banamine squirted into his mouth via an oral syringe. A couple of weeks ago, he needed that medication. After that one dose, if he saw me holding a syringe, he’d turned tail and walk away. Tonka also wouldn’t let me hold his head still (you wrap your arm up and hold the bridge of the nose to insert the medication.) So, for the last two weeks I’ve gone back to syringe basics, and by using a combination of positive training techniques, I’m back to Tonka letting me hold his face and put an oral syringe into his mouth. It’s been a few minutes a day well spent. Banamine is the drug given when your horse colics. I hope I never have to use it, but it’s good to know that if I do, the procedure will be easily done and won’t add to his anxiety.

Anyway, back to the morning with the vet. Because Tonka has been taught to stand squarely, and because he’s been taught not to move when put into a position, this is how the x-ray taking went. 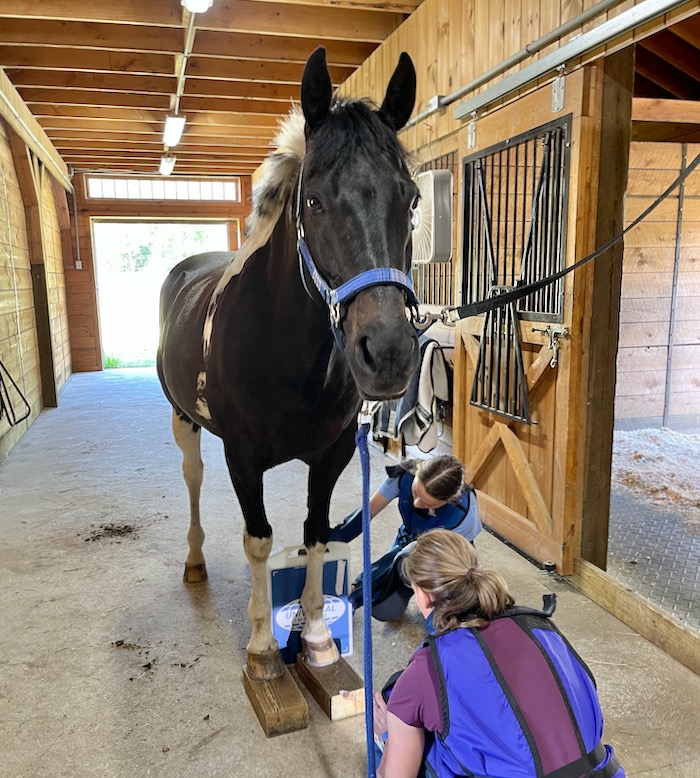 Multiple views of both hoofs were done. It took awhile. Tonka stood pleasantly the entire time. He got one piece of carrot after the blocks were removed, and he was well-satisfied.

Tonka was tranquilized for the joint injections. Monika gives a peppermint after using the needle. Tonka thought it an excellent trade-off for a jab.

All in all, a stressless and safe morning-long visit by our veterinarian.

You put hours and hours of training in the saddle to perfect your riding. Creating a calm horse on the ground for your veterinarian – and yourself – is time equally well spent.

Do you proactively train for vet visits? Is there a procedure that causes drama? Let me know in the comments!