Last week I gave a private clinic to three wonderful clients. Only one of them had ridden when young, the others started riding after their own children had grown. Age isn’t an impediment to catching horse fever, and they all seriously had it. Not long after getting in the saddle, they jumped into horse ownership. Although they were taking lessons, they didn’t have experienced professionals guiding them in their horse care. So, the sort of horsemanship that one learns in pony camps, through 4-H, through slugging muck, and years of being around like-minded horse crazy kids and adults, wasn’t part of their background.

They called me because they were having behavior issues with their horses. Biting. Being dragged instead of being able to lead, horses stepping away from the mounting block, horses anxious when leaving their horse friends to be ridden. General grumpiness. To my clients, it seemed as if their interactions with their horses were based in conflict, which wasn’t what they’d imagined they’d have when they fell in love with these creatures. My clients wanted to know if their horses were happy. But their horse’s behavior and body language was a like an unmapped country to them. Over FaceTime we discussed physical impediments to good relationships. All of the horses had some level of pain; hoof and gut health was addressed. We discussed expectations, and how to focus on the behavior that you want and reach your goals in small steps. But you don’t know what you don’t know, and I could tell that they weren’t telling me key information that I needed in order to help them. As soon as we were all vaccinated, I drove 4 hours to meet them and their horses.

All good relationships start with communication. Listening and responding. Questioning and answering. Too often in our horse’s lives they have none of this. Their schedule is determined by the barn staff, they’re fed and turned out at set times. Ridden when we want to, even if it means interrupting their naps. We tell them where to go, how fast and for how long. It sounds like a terrible life, but it doesn’t have to be. Every interaction can entail give and take and acknowledgment of the other’s perspective. To do that with horses takes a great deal of observation and skill. It’s done in almost imperceptible increments: when leading the horse, instead of yanking on the lead when the horse hesitates, take a second while the horse looks around, and then say let’s go (instead of yanking on the lead, annoyed that the horse isn’t walking in lockstep with you), when telling a horse to move over, instead of just shoving them, look for the weight shift so that the horse is able to comfortably take a step over.  Small things like these make a difference! I know plenty of experienced horse people who are dictators to their horses, so I’m realistic about teaching these nuances to beginners. But I know the place to start: Grooming.

Grooming isn’t just about getting your horse clean. This is when your horse can tell you their preferences and you can respect them. It’s when you tell the horse that something has to be done, but you do it in a way that minimizes their discomfort. It’s a way to nurture and bond. It’s how you can make each other feel good.

I asked Nancy to groom her horse, Edison. She pulled out a stiff brush like this one. I have one of these. I use it to knock mud off of blankets. 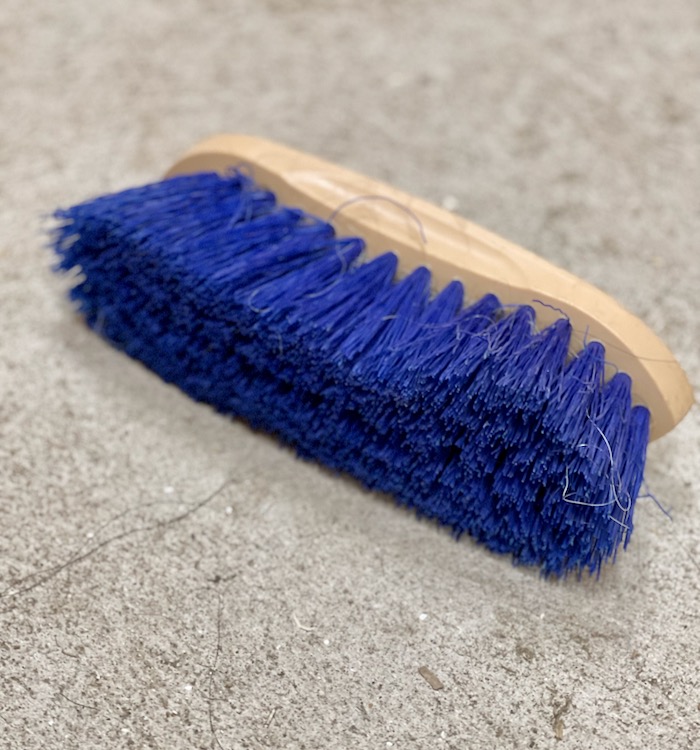 Edison looked angrily at the brush, and flinched when she used it. I asked her to stop, and rummaged through her grooming kit. There was a metal curry, which should only be used when shedding out a horse, or to clean other brushes. There wasn’t much I’d stroke a horse with. No wonder Edison snapped when being groomed! I did find a pliant rubber curry. This I used in circular motions on Edison, starting on his neck and working down. If his weight shifted away from me, I lightened my touch. If he leaned in, I rubbed more vigorously. He was telling me what he liked, and I was listening, and his face changed. The ears went wide instead of back. I cleaned areas that have never been itched – between his front legs and the middle of his belly. The inside of his gaskins. I got down along his cannon bones and on the pasterns. There were places that Edison was not thrilled about, but that needed cleaning. I acknowledged his concern, and adjusted my touch. Edison was grateful.

After currying, the next step is to use a dandy brush. Don’t drag it across the coat, rather do a flick after each stroke. This lifts and removes the dirt and dead skin that you loosened by currying. I got a dandy out of my truck to show Nancy. Again, as I did this, with each stroke I asked Edison what he thought, and adjusted the brushing to how he stood and moved. There were places where he clearly said more, please!

The next brush to use is a finishing brush. This removes dust and puts on shine. It also should feel good to the horse. Tonka is extremely fussy about this brush, and he varies from day to day about which one of the 3 that I have he prefers. How do I know? If he likes it he settles in and his lip droops. If he doesn’t, the ears go back and he braces or shifts away from me. For horses this sort of body language isn’t subtle. It’s how they talk with each other. That I listen to that creates trust and resilience. When something does go wrong, or he gets scared, he knows that I’ll listen, so he doesn’t panic. For a horse like Edison, a grooming session with give and take reduces frustration, which means he no longer feels he has to bite and paw to get his point across. And, his more optimistic attitude will carry over into the rest of his interactions with his person. Yes, grooming can do that!

Nancy hadn’t been able to brush Edison’s face. Approach with a brush and he’d bare his teeth. In fact, the last time she’d been able to groom his head was in the previous year when Edison was tranquilized for a medical procedure. After grooming Edison’s body, I was able to approach with the face brush from the side (horses truly dislike it when you go at them head-on). A face brush is small and soft, and when Edison realized that this was actually going to feel good, he relaxed into it. I handed the brush to Nancy and she had a go. No biting! No anger! Just a satisfied horse and owner.

Edison is fine picking up his feet, but it took Nancy too long to clean them out. I showed her how to use the point of the hoof pick to get into the narrow area at the base of the frog. It’s small things like that that new horse owners aren’t learning. By the way, it’s worth purchasing a sturdy hoof pick which makes short work of packed-in dirt.

I also worked with Nancy and Edison in the wash stall. Edison usually backed up into the corner, ears pinned and threatening while getting washed off. There’s no hot water, so we used a bucket of room temperature water. I showed Nancy how to watch his expression and wait for permission to wet Edison down with a The Ulta-Mitt and then Tough 1 Great Grip Sweat Scraper, Purple off the excess water. When he realized he wasn’t getting doused with cold water, his entire demeanor changed. It doesn’t take more than a few minutes longer to interact with your horse like this instead of rushing through the bath. The time is well worth it. 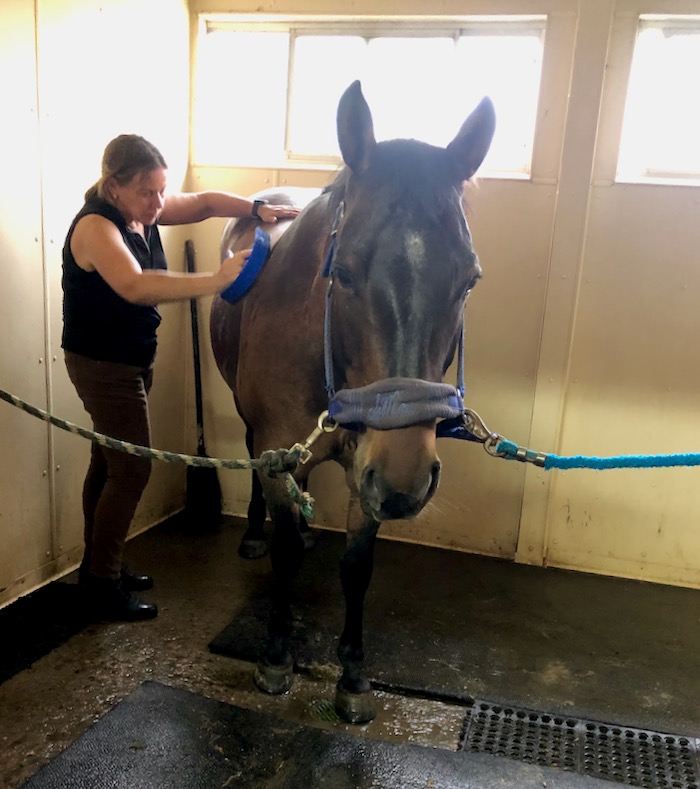 The next morning I returned to the barn to work with another client. Nancy and Edison were already in the aisle, and Edison was blinking his eyes in happiness while Nancy brushed his face. 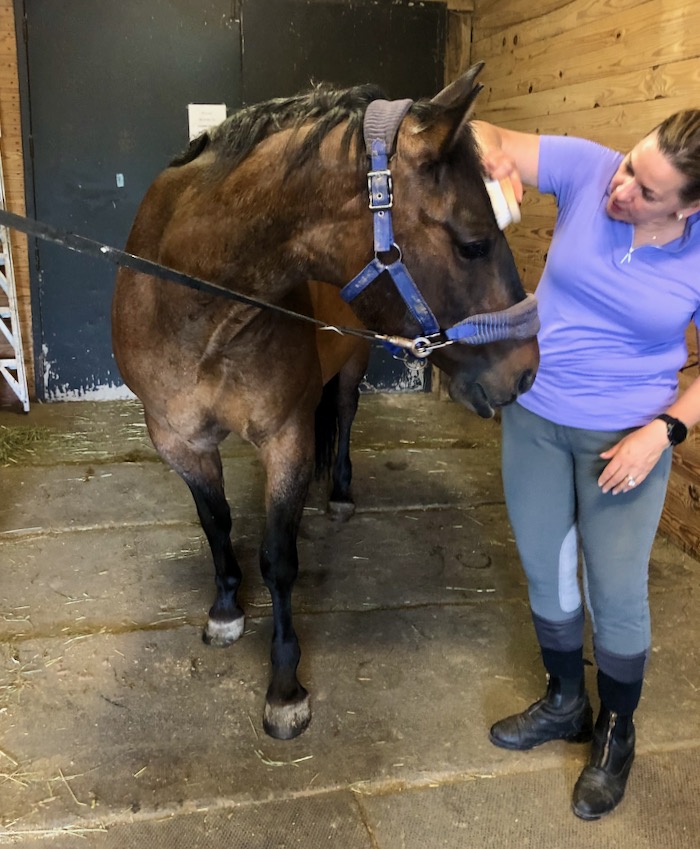 Grooming really is the path to that relationship that you want with your horse.

This is what Nancy texted me after our clinic:

We had such a happy day together. After our ride when I showered him, I followed your example and he was happy in the shower. No more backing into the corner no pawing the ground. I am listening better and that makes him so happy.

The light bulb moment is not to treat activities like grooming and showering like chores to be done while my mind is elsewhere but rather as a chance to bond and listen to him.

Corey, one of my other clients on this trip, had a similar story. I also gave her a grooming lesson. She also had been using a stiff brush, which I switched to a soft curry and brush. Her horse was so angry about grooming that I couldn’t even get near to him. Even in cross-ties he snaked his face out and tried to bite me. (I have protocols to fix that, but for this session, I could have Corey do the grooming.) Part of the reason for his not wanting to be touched were pain issues. A few days after my visit, the vet came out and her horse is doing better. Meanwhile, she’s been having grooming conversations with her horse. I got this text last night:

I just groomed my horse and he LOVED it!!! Literally not ONE ear back moment. It was weird and beautiful and so fun!!!

There it is. Grooming for happiness.

Essentials in Your Grooming Kit

Listening and having a conversation with your horse during grooming is key, but to do this you need the right tools. 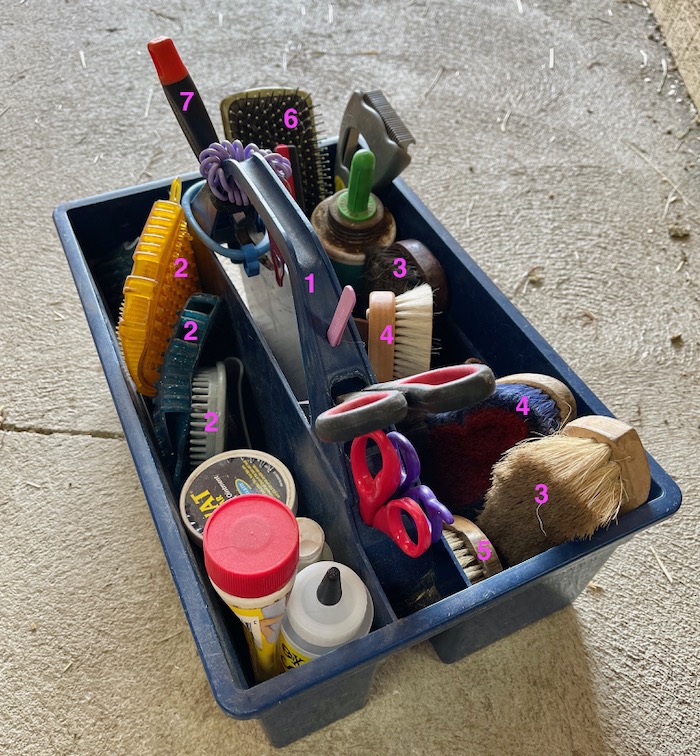 Have you groomed your way to happiness? Tell me in the comments!

7 thoughts on “Grooming For Happiness”