Tonka sometimes feels off. The veterinarian has had a look, and then another. The slight gimpyness isn’t enough to come up with a clear diagnosis, or even to be exactly sure where the unsoundness is coming from. This isn’t a new problem. It keeps rearing its head. Or should I say bucking its butt? Because when Tonka is feeling uncomfortable he does this. (Yes, he broke the mirror. This is not an acceptable way to express frustration. More about that in another post!) 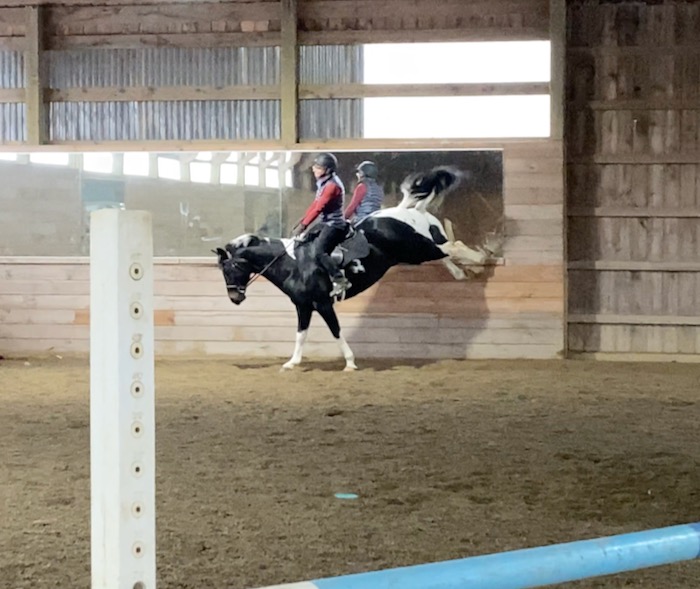 Tonka will be 15 years old next week, old enough to have aches and pains, arthritis and knotty muscles. Rather like me! I wouldn’t pass a soundness exam either, but I keep going. We both will. It’s best for both of us. The coffin joint, left-front pain appears to be gone. In a recent lesson, Tonka happily trotted over these raised poles.

He was even happier when he thought we were going to start jumping.

Most of the time Tonka moves fluidly and with even footfalls. 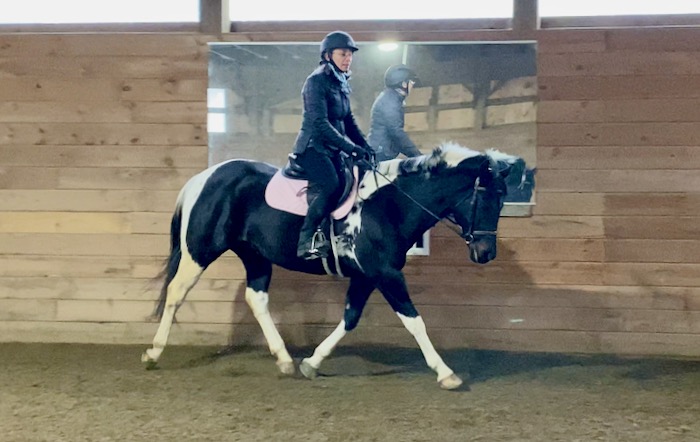 But sometimes he does this. See that head bob?

But also see how Tonka is moving? His under neck is jutted out and he’s braced and short across his back. When Tonka is trotting in a round yet open frame and using his topline, he goes beautifully sound. I’ve had his spine, stifles, and hocks checked. There’s nothing obvious on x-rays or in flexion tests. He has arthritis in a bit of his neck, but that’s been treated and he’s currently very flexible from poll to withers. So, the question is, does he brace because he feels pain, and then shows unsoundness, or does going short and inverted like that cause discomfort, which then causes the head bobbing? It’s never clearcut. I’d say it’s a combination of the two.

What is clear is that the more we do pole and lateral work, the more he goes round and uses his rear engine, the better Tonka goes. Like me and yoga. I do 10 minutes most mornings, and the first 7 aren’t pretty! But I’d be lame for the entire day without that stretching.

Here’s Tonka on the lunge line. It’s the day after the poles lesson. The previous day’s concussion on the hoofs didn’t do any damage. He looks good.

Fine under saddle, too, in a working frame.

I’ve been taking one jumping lesson every week or so (recently every other with this weather.) I’ve talked with my trainer, Steph, and we’re going to add a poles lesson once a week, too. 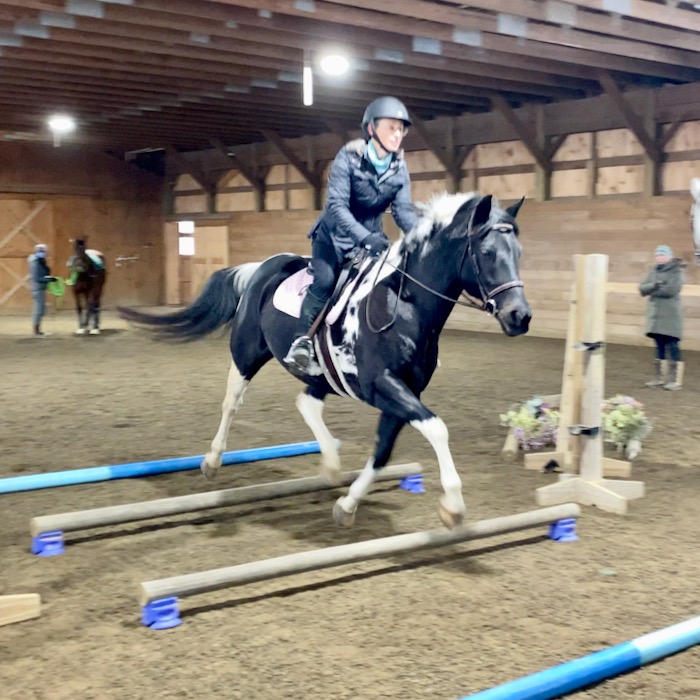 I’m also adding daily lateral work to address Tonka’s chronic crookedness at the canter (something he’s had ever since I got him.) Wherever his tightness originates, it’s deep in there, and I’m optimistic that these exercises and the jumping will finally reach those knots. I think that Tonka will be going more consistently sound with this gymnastic program. If lameness does recur, it’ll likely be more defined and easier for the veterinarian to address.

Meanwhile, I’d better up my own yoga regime to 20 minutes daily. It’s only fair to Tonka that I be as flexible and sound as he is.

6 thoughts on “Sound to Ride”