Some lamenesses have obvious causes and clear resolutions. Your horse is injured by a known trauma. The wound heals. Perhaps a ligament swells, causes pain, and eventually returns to some semblance of its former self. X-rays and ultrasounds can give definitive diagnoses. Sometimes. Unfortunately for the health of the horse – and the mental health of the owner – when your horse is lame the cause and effect is not usually so clear cut. This has been the case with Tonka.

Tonka’s conformation is such that he’s prone to weakness in his loin area through the sacroiliac. Keeping him fit with trail rides and gymnastics is part of how I keep him sound. Sometimes he has objected to the hard work. Ears pin. The tail swishes. I sympathize. I have lower back pain and if I don’t push myself to stay fit, my condition worsens. Some days I find it hard to bend over to put on my socks. That doesn’t mean that I should stay in my pajamas. The opposite is true. It means that I have to get on the yoga mat. It also means that just as I have to pay attention to my posture and body mechanics, I have to do the same for Tonka. It’s easier for him to travel with his nose up and his back sunk, but in the long run, that’ll just weaken his weak spots more. That’s why I get him to go round and even – to use the equivalent of his lower back.

However, and this is a big HOWEVER, sometimes it’s not a question of fitness. Sometimes the horse is hurting. No pain, no gain is not the answer for a condition that needs medical attention. Frustratingly, knowing which is which is a murky area. It helps to know your horse.

Four years ago I noticed that Tonka was shaking his head just a little. As if he was trying to get rid of pesky flies off of his ears. This was winter. There were no flies. My trainer thought it might be the fit of the bridle’s crown piece. I purchased an ergonomic bridle, but that didn’t fix the issue. I called the veterinarian. She didn’t see anything wrong. Things got worse. When Tonka moved he looked sound, but he moved reluctantly. Then the behavior worsened even more and he bucked instead of trotting. A short version of this long story is that Tonka had developed bursitis in his poll and cascading back issues into his sacroiliac joint. He was treated with injections and medication and slowly returned to sound. The cause of all of this was likely a too-high hay net. 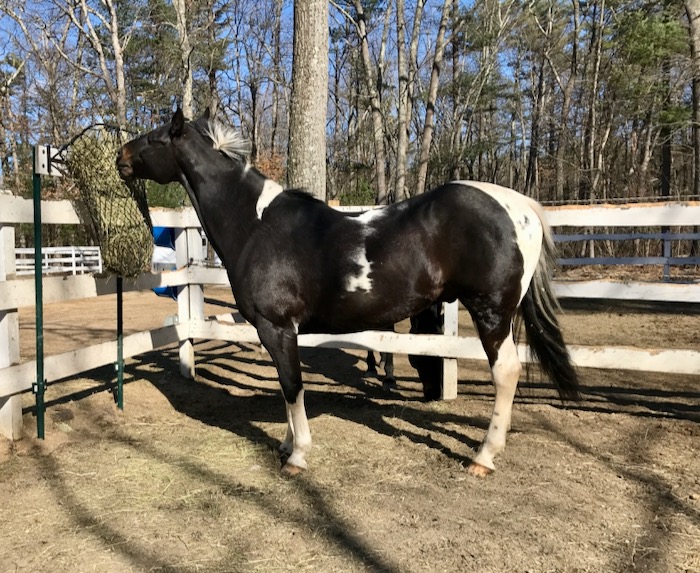 So now when Tonka goes hollow or objects to a canter transition I wonder, is he in need of the equivalent of yoga and do we ride through it, or does he need medical intervention?

At the beginning of this month I took Tonka to a schooling show. He warmed up great.

But then we took the cross-rail too big. 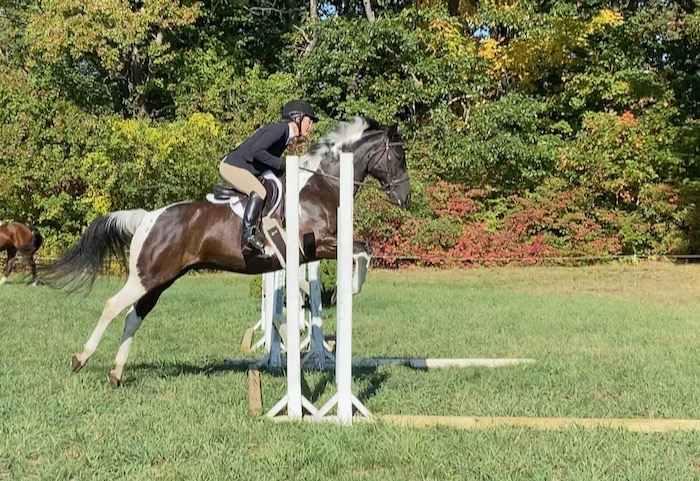 When Tonka landed he took a hoppy step. Then he pinned his ears and swished his tail and made faces. 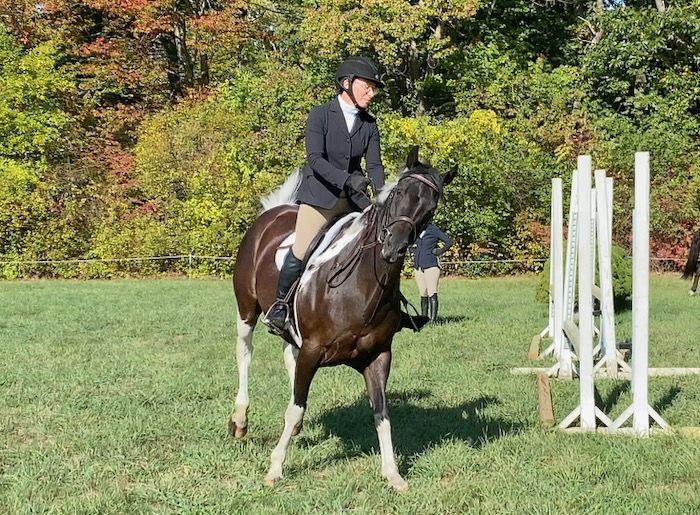 But he cantered on and after a half-lap around the warmup area he felt good again. 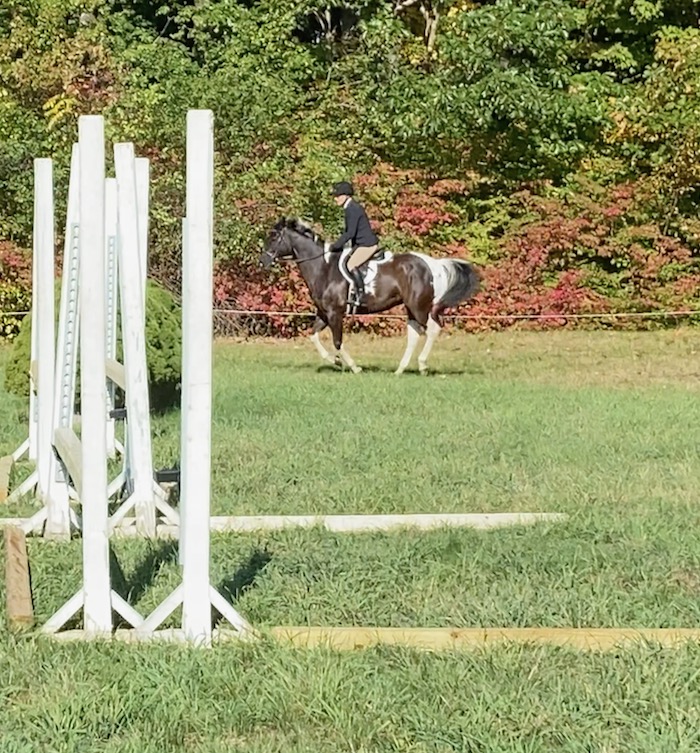 We went on to have a decent jumping round in the first class. Here’s a snippet.

But then Tonka did this at the start of the second round.

This was a schooling show in a venue next to a busy road, and on grass that the horses weren’t used to. I’d already watched a couple of horses have bucking fits and some horses refusing jumps. Was this something that Tonka could settle out of? He did. After a hairy first obstacle he jumped in perfect form. After the round we went back into the schooling ring and Tonka trotted and cantered soundly. However he didn’t feel happy. I know my horse. Enthusiasm is shown by big porpoise leaps, not kicking out. I scratched the last class and called my veterinarian. We discussed what to do next. With Tonka’s history it was decided to do a treatment of shockwave therapy over the SI area, and a few days of methocarbomal, a muscle relaxant. 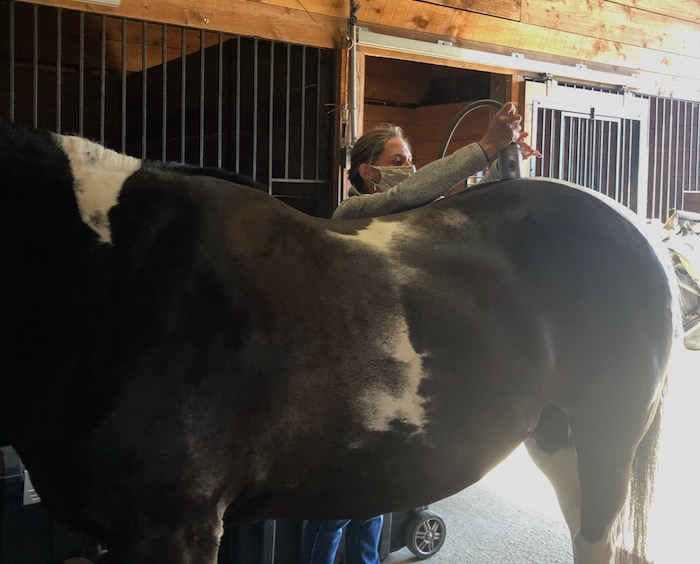 Tonka felt better! He did super at the next show.

Then again, something continued to bother Tonka. It was subtle, but I felt that he wasn’t moving as fluidly as I thought he could. Then I noticed that on his right side, right where the panel of the saddle stops, there was a mild swelling that appeared right after riding and then quickly dissipated. 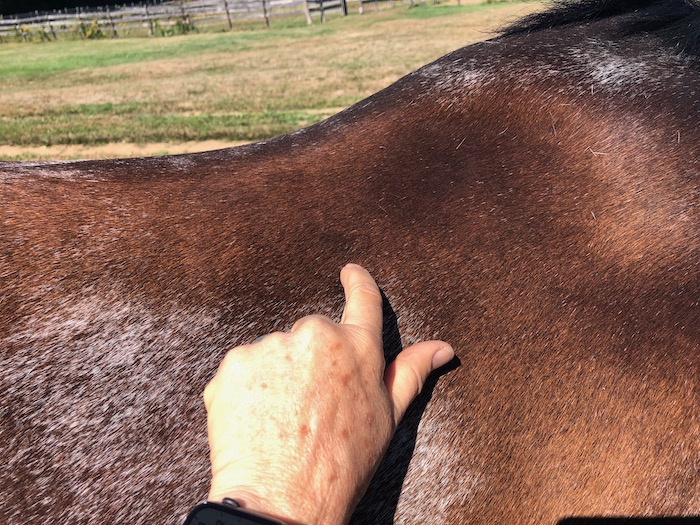 Because I had bought a saddle from a CWD rep, I had someone to call. Andrea Puls came right out, noticed a small gap between the saddle and my horse and fixed it with some padding. (This is great service! It was a used saddle that I purchased a year ago and she fixed the issue no charge.) I got on and I swear I could feel Tonka breathe a sigh of relief. He trotted off beautifully. (My horse, despite being Texas born and ranch raised is not stoic. He lets me know if anything, even the slightest of anythings, is amiss.)

Of course the worry and second-guessing never stops! On Monday Tonka started out head bobbing at the trot. Lame???

Nope. I’ve seen this before with him. His legs go sound, but he’s bracing his back. This was the equivalent of me whining about yoga. I had changed my schedule and was riding in the morning when Tonka was usually taking a nap after his morning hay. When I sent Tonka forward off my leg and he accepted contact and went soft and even.

I made a point of letting Tonka know that moving correctly was a good thing. He got a cookie and rest after a particularly nice trot circle.

Then it was right back to no slacking off! I think it finally dawned on Tonka that moving with correct posture is actually more comfortable than going hollow and bulging his lower neck. We are back to doing flowing serpentines. That swinging tail is a telltale sign that Tonka is happy.

Tonka is my Princess and the Pea horse. Horses don’t sleep on twenty mattresses, but Tonka does sleep on a bed of shavings. I bet he would notice if there was a lump in his stall mat under all of that bedding! What will be the next thing that he tells me doesn’t feel exactly quite right? Will it be 1) serious or 2) easily remedied with decent riding and horsemanship or 3) something to tell him to chin up and deal with it? In the last three weeks I’ve had to address all of these situations. Some at the same time! Keeping my horse’s back sound is complicated.

As those of us who have these animals exclaim (say this with exasperation): Horses!

One thought on “Horse Back Health Is Complicated”