I’ve spent the last six years doing lower level dressage with Tonka. He moves off of, and bends around, my leg aids. I close my fingers on the reins and he takes a steady, soft and pliable contact. As horse people say, I’ve installed the “buttons.” I’ve recently started taking jumping lessons for which those dressage buttons have proven useful. Instead of hauling Tonka around a corner using my reins, I can keep him balanced on a curve off of my legs. When I need to adjust his stride coming into a fence I can apply a touch of leg, or slow him with breath and a slight change in my seat. It’s not perfect, but I’ve got the channels for communication.

I also have a willing horse under me. Tonka thinks that this jumping stuff is a blast. Here’s his attitude when we warm up over poles on the ground. 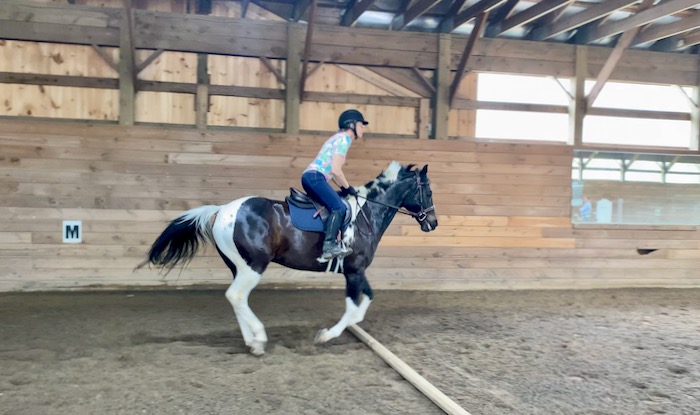 One thing that I can’t take credit for is Tonka’s perfect form over fences. He naturally tucks his knees and has a lovely bascule, even over a 10-inch jump. Which is an appropriate height for us jumping newbies. 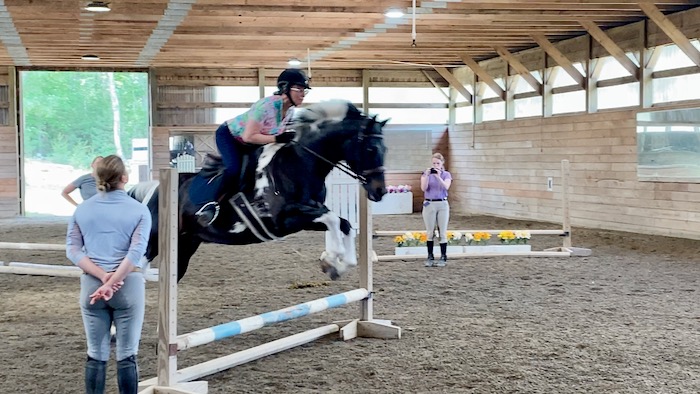 Tonka is literally taking to this new endeavor by leaps and bounds. I need to keep up! I also have to be careful what I tell him. The second time that I approached this jump I noticed that at the pace that Tonka was going, we were going to come in too close for the takeoff. Instead of adjusting his stride, I made the (wrong!) judgement call to take it long. All I did was a teeny tiny squeeze with my calves in encouragement. It’s a dressage button that Tonka knows and responds to. 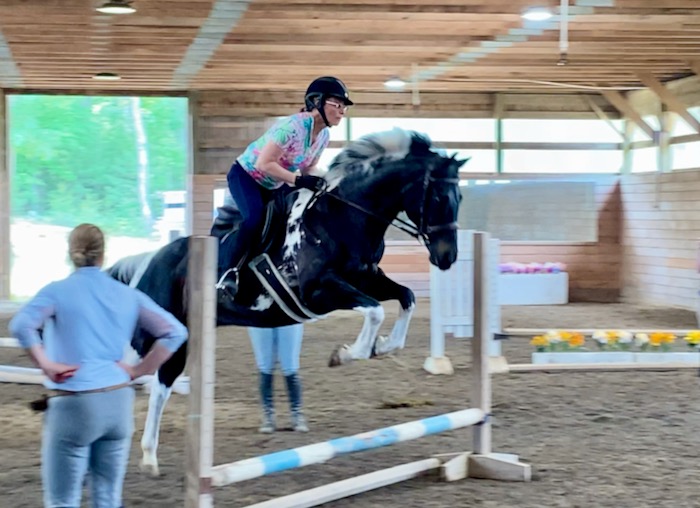 Tonka thought that my idea of taking the jump big was brilliant. On the landing he looked around to see what next and was disappointed when I stopped him to catch my breath and stop laughing. 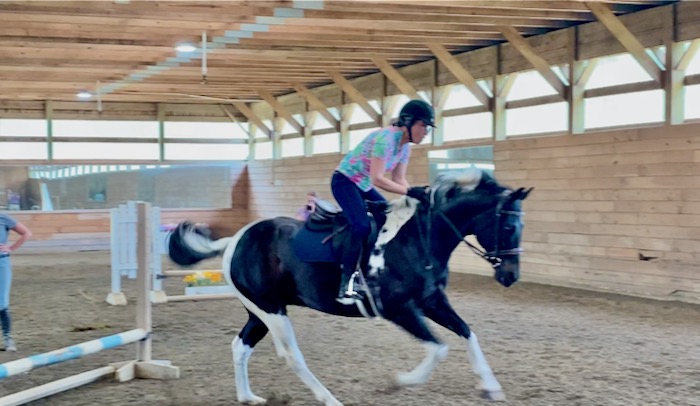 He used that break to go over to the trainers so they could tell him how brilliant he is. 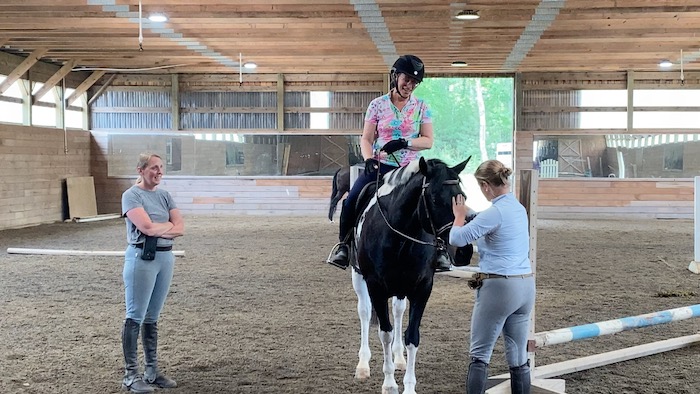 Jumping isn’t just about going over poles. Tonka has to get used to other obstacles. Here he is jumping a flower box. As you can see, the training of getting him used to the flowers paid off. Tonka’s can-do attitude also comes from the other training that I do with him. Yesterday I joined members of my mounted search and rescue team to do some obstacle training. He’s an old hand at walking over tarps. 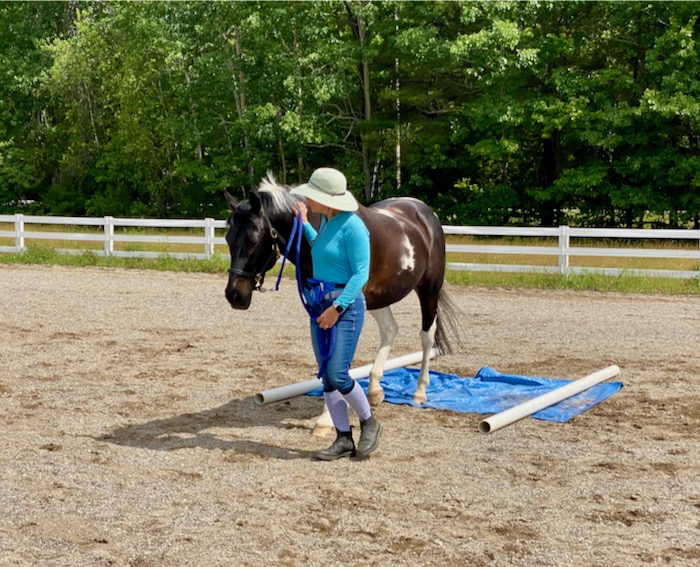 It’s been years since he’s had to walk through a noodle curtain. I’ll do another post soon about how I did this refresher course so that we had no issues. (I used my clicker training skills.) 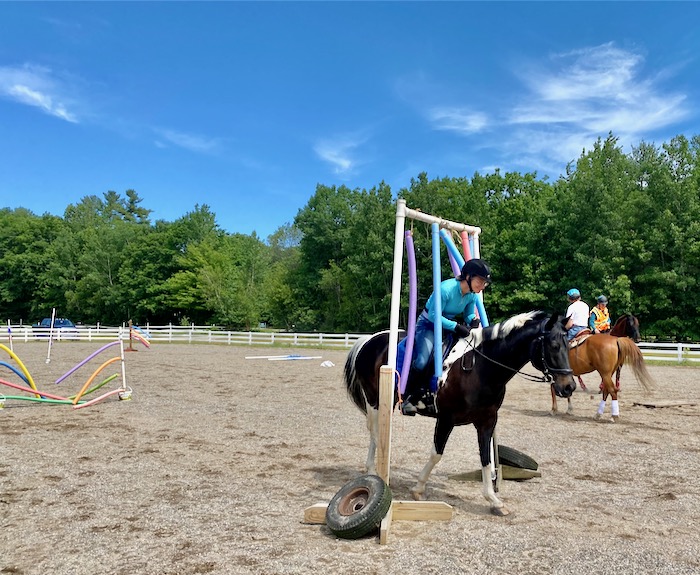 Tonka was doing so well that I decided to trot through the noodle curtain and then on through the “car wash.” I assumed that Tonka wouldn’t hesitate. I was right. However, I hadn’t counted on the fact that he has a new button. The “jump” button. Which might be his favorite button ever. Under the curtain we went. Then right OVER the car wash. I wish that I had a photo for you. He jumped the purple noodle with room to spare. From a trot. With me in my dressage saddle. 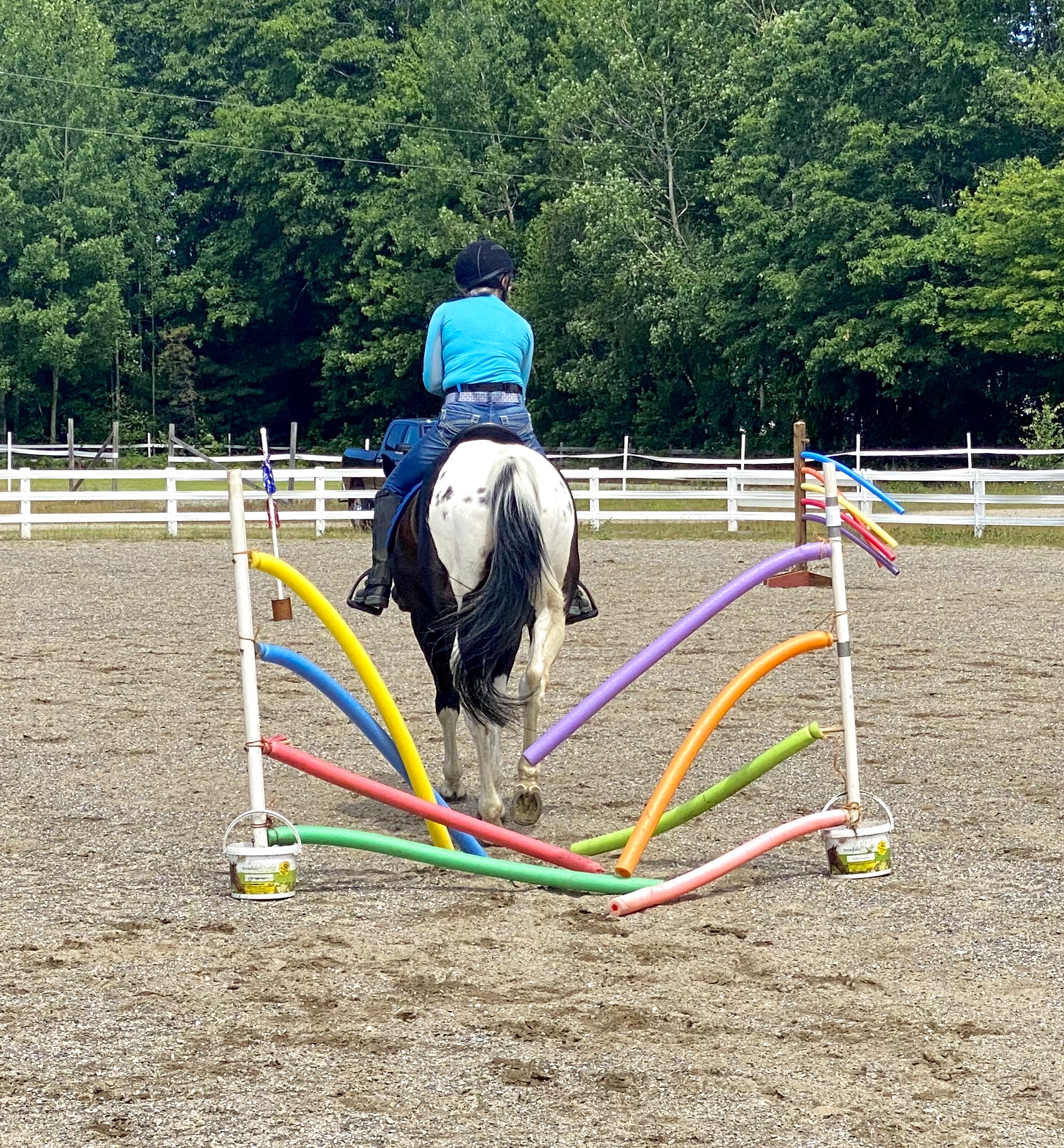 I don’t know if a horse can be too willing, but I do know that I’d better pay more attention to what he thinks those “buttons” mean!

7 thoughts on “Too Willing?”