As part of Tonka’s search and rescue training (we’re members of this team), we have to get used to out of the ordinary situations. You can’t train for every scenario, but you can train for confidence around, over and through novel obstacles. Last week a few of us met to challenge ourselves and our horses. There were pool noodles to navigate, a pole maze to back through, a wooden platform, a tarp, etc.

Tonka has some experience with such things. The woman that I bought him from taught him to be blasé about pool noodles, walk over a mattress and through a kiddy pool. That sort of thing. When the opportunity arises, I’ll walk him over a tarp or have him go look at a balloon, but we haven’t done such formal training for years. We have, though, faced many potentially scary things on the trail, and have successfully navigated them. It’s not the specific challenge that matters, but rather what tools you have in your trainer’s toolbox. I haven’t faced Tonka with noodles in ages, but I have ways to communicate with him, not to worry, this is safe. One of those tools in my trainer’s tool box is my touch cue.

I’ve taught Tonka to touch the flat palm of my outstretched hand. (Read how in this blog.) I’ve made this a highly reinforced behavior, which means that every time he does it, he gets a tangible reward, usually something delicious. He’s learned that if the hand isn’t near his nose that he should walk towards it. Sometimes doing this helps him out of a stressful situation, so that seeing that hand and hearing “touch” becomes innately calming.

This is a pool noodle “car wash.” Tonka calmly walks up to it. 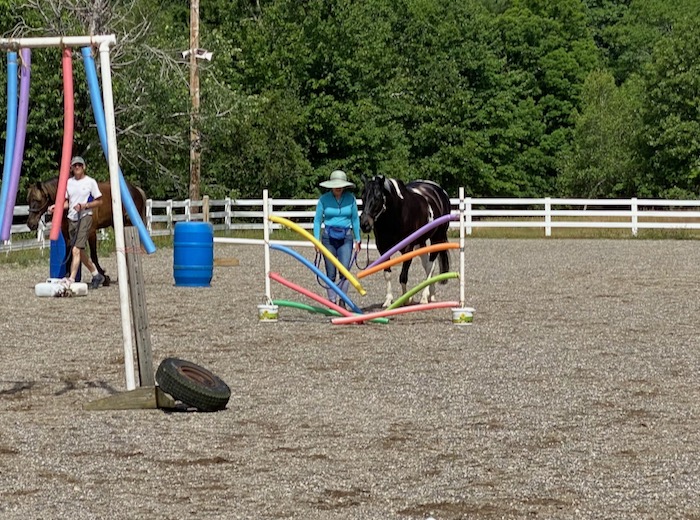 However, at the moment that he should be going through it, he stops worried that this isn’t a good idea. I walk on. Leading by example! Tonka doesn’t follow. I don’t apply pressure. No tugging. No whip tapping. I do use the halter and lead to let him know that I’d like him to face forward and that it’s not okay to walk away. I let him think for a second. 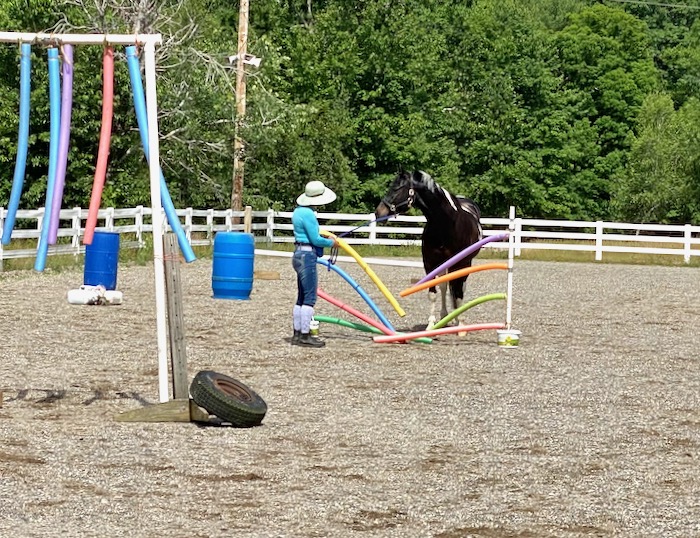 Then I show Tonka the flat of my palm and say touch. Not only does he walk through the car wash, but he does it with a relaxed and willing countenance. He gets a chunk of carrot for this effort. 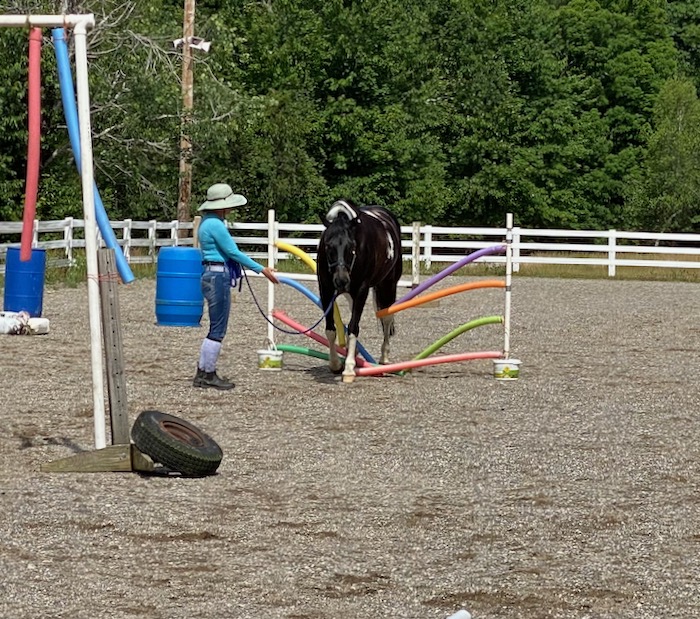 The pool noodle curtain is handled the same way. 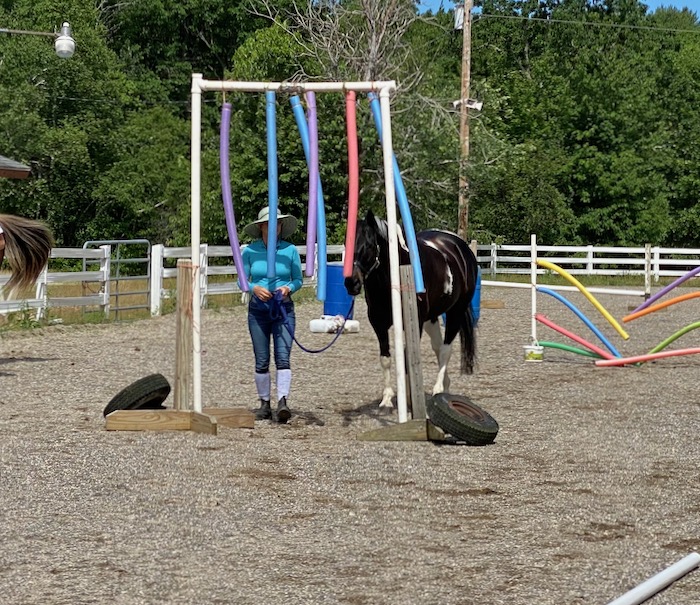 After that Tonka confidently walked through both obstacles. No touch cues or cookies needed. We also did these mounted. The first time through he got a pat and a cookie. After that it was matter-of-fact and we went on to other opportunities to earn reinforcement. 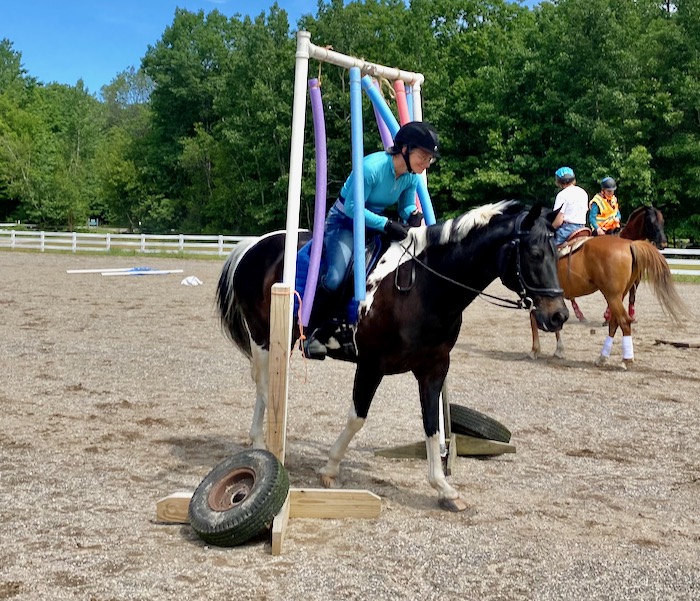 Another item that I have in my toolbox is curiosity. Too often, people are afraid of how their horse behaves when they see something new. That’s understandable. A high headed, quivering and snorting horse is scary to sit on. That makes you avoid life outside of the safety zone of the ring and barn. Instead, in your daily interactions, when your horse gets looky, let them know that you’re interested too and then show them that there’s a calmer way to respond. Instead of quashing your horse’s interest in the world around them, (or limiting what you do) train for thoughtful interaction with novel things. I don’t have a formula for you to follow to do this. It’s all about observing your horse and rewarding (with your own body language, but also sometimes tangible reinforcers) those moments where your horse is in that interested, yet safe zone. It’s about not forcing your horse or over-facing them, but rather about recognizing that safe zone and gradually expanding it.

Tonka was fascinated by this ball. It was light and moved in the wind, which was unlike other balls he’s interacted with. He had a high-headed moment and flared nostrils, but then he led me over to it. 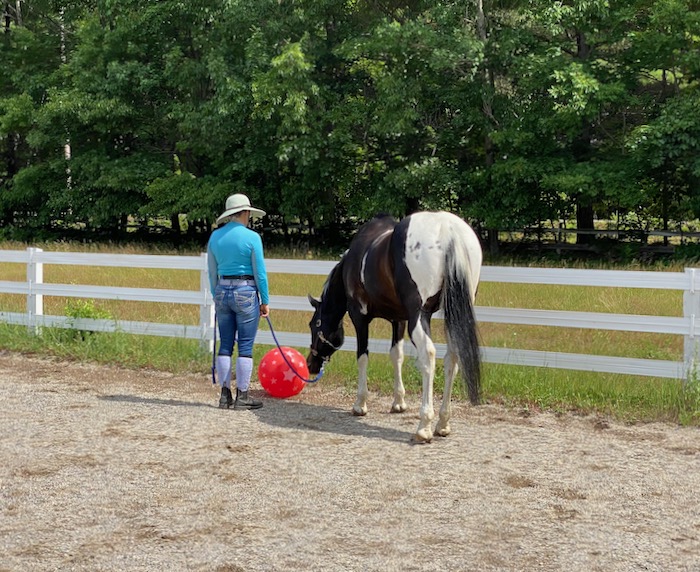 When he nosed it, the ball bounced away. That startled him. I took a quiet breath, which momentarily relaxed Tonka. At that exact moment I told Tonka how brave he was and gave him a cookie. Your horse will quickly embrace the connection between calm curiosity and good things happening. Tonka nosed the ball a couple of times for fun, just to see what it would do. I let him figure out how he wanted to investigate the ball on his own. When he interacted with it I praised Tonka. When he looked at me with a sane eye, (almost as if he were saying, Aren’t I a clever bold boy?) he got a cookie. In this way he learns that being curious is fun, and that checking in with me is rewarding. Then we went on to other things. 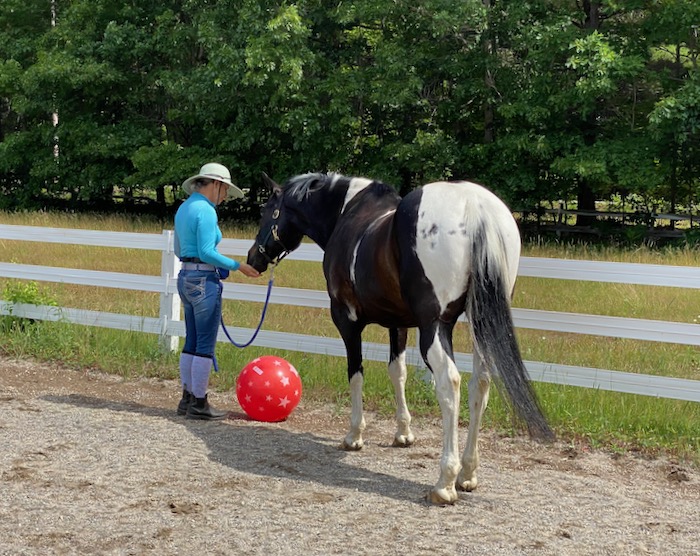 Training for curiosity gives my horse the confidence to approach new things. Training the touch cue gives me the ability to guide him when he is unsure if his curiosity has led him to a safe place. Together, they help make Tonka and I a team that can thoughtfully navigate challenges.

There was one item that had Tonka worried – noisy jugs that I dragged on the ground behind us. We overcame that fear in the same way. Do you want more details? I can put that in another blogpost. 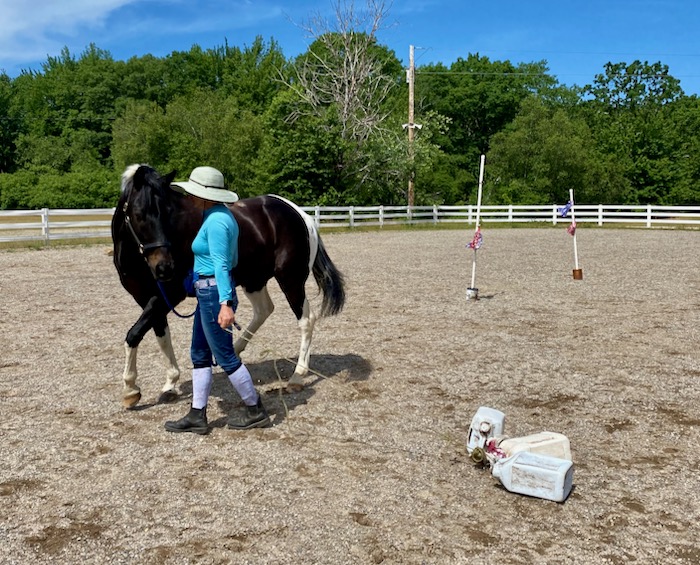 8 thoughts on “Combining Curiosity and the Touch Cue”