Sunflower and Nymph are two little burros. Sunflower is the mama, Nymph the baby. A few years ago, when Nymph was still nursing, they were in a horrific hoarding situation, but were saved by kind people, and made their way to a forever home at a rescue. They’ve had loving care in a positive reinforcement-focused home, so they went from feral to liking people. They even came to tolerate hoof handling. However, last year Sunflower had a terrible year of health issues, and then she had a skin problem on her legs, exacerbated by flies. She decided that no-one should touch her legs. Her daughter agreed that leg touching was not to be tolerated.

By the end of the summer, Sunflower’s legs really needed attention, and at the same time, I decided that I really needed some time with long ears. I offered to help.

I have the clicker training skills to teach the donkeys to stand still, but I decided not to use a marker or food rewards during this training. Sunflower and Nymph live in a dry lot and cannot eat constantly or they’d be sick. I could have fed donkey-acceptable treats, but food is so compelling to them that doing anything for it changed their emotional state and focus. (I tried during one session, and didn’t like the results.) Another consideration was that I couldn’t separate the two, and that food could trigger competition and resource guarding. An option was to teach separate stations for the donkeys, but honestly, that was more training than I felt I had to do for my goals. Also, as a general rule for equines, I reserve the clicker for behaviors that have specific cues. Leg handling is part of simply being around the animals.

In any event, food wasn’t the only reinforcer available. It was immediately apparent that what the donkeys thrived on was loving attention with no pressure. (Working to earn food is a form a pressure. Hanging with me was not.) Sunflower, Nymph and I quickly came to an agreement that they would tell me what was acceptable, and that I would listen to them.

It’s all too easy to think that an animal is fine with you, and to follow them around, petting and hugging. Or, to insist that what you’re doing really isn’t that bad. To keep myself from doing that, instead of teaching the donkeys to station in one place, I stationed myself next to the shed. They chose to be near me.

Although they wanted my attention, early on I had to gain their trust that I wouldn’t push past their limits. Here’s Sunflower telling me that not only could she not relax around me, but that the front leg touch had gone too far. She walks away, and I go back to my station.

The donkeys were jumpy about having their hooves picked up off the ground. Partly, I think that they were fearful of balancing on three legs, so at first I’d pick up only a half-inch and for the briefest moment. Nymph was most worried about having her hooves held off of the ground, especially when it came to the hind legs. Her quick reaction was to kick out. 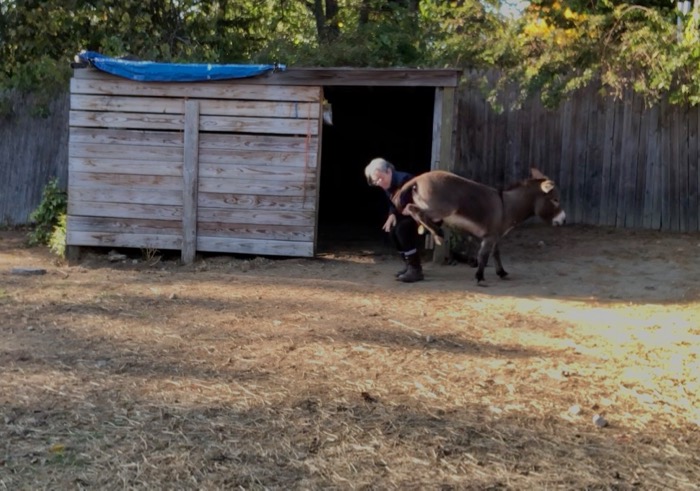 However, by the fourth visit the donkeys were not only accepting leg strokes, but able to confidently stand while each hoof was picked up. Most importantly, they did this with a matter-of-fact manner. It was simply part of what we did together. If they stepped away from me, I let them. They always came back for more. Although this time with the donkeys was relaxed and looked un-pressured, I always had my goals in mind. I gradually increased the criteria – let my hand linger a second longer, rubbed a little firmer to clean the leg, and such – so that there was always progress.

I knew that the donkeys liked the leg-handling sessions when they started braying when they saw my truck come up the driveway. 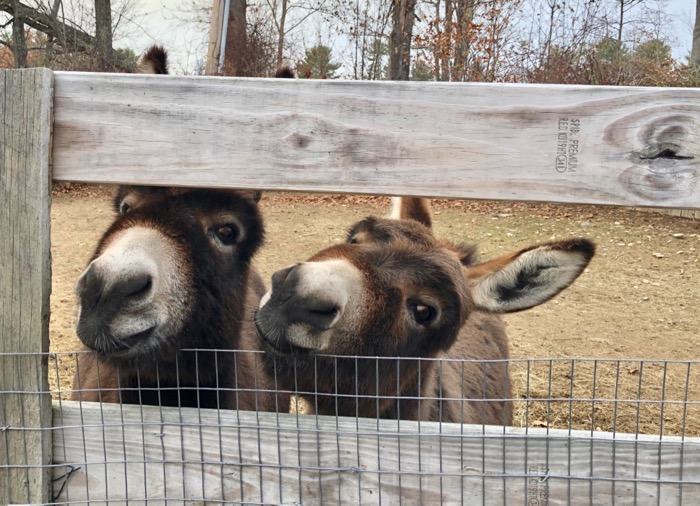 . This would be just the gentle scrubber that I needed to clean up those legs. 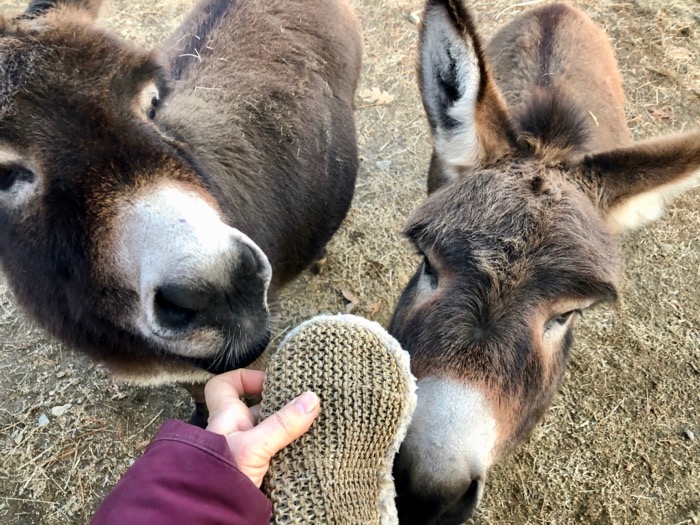 I think that Sunflower realized that the handling was making her itchy legs feel much better.

Nymph remained skeptical, until I figured out how to use one hand to scratch her shoulder, and the other to rub her legs. That’s how she likes it.

Look at this – Nymph is no longer a jumpy donkey that kicks out when her legs are touched! Now she welcomes this handling.

This has all been done with observation, patience, and letting the donkeys tell me what felt right. In ten visits, less than two hours total, with nothing more than affection and scratches, the donkeys have learned to not only accept, but to enjoy, leg handling. 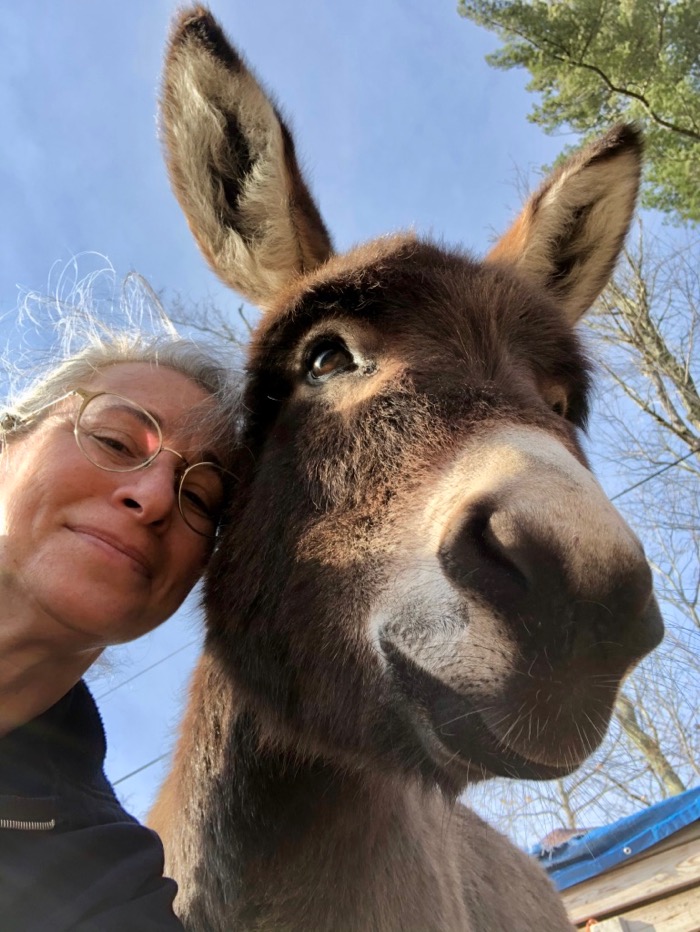 I am equally reinforced. There’s nothing like time with donkeys.

(For more about working with the donkeys, check the category donkeys on the right.)

One thought on “Donkey Leg Handling”