Effective trainers know that when a desired behavior is rewarded, it’s likely to happen again. For that reason, we’re thoughtful about paying attention to what the animal wants and timing the reward so that they make the connection between what they’ve done and the consequence. But behavior isn’t only learned in a training session. We’re learning all of the time. Training also doesn’t happen only to the animal that we’re working with. The behavior that we humans do is also determined by what we find reinforcing! Training sessions go both ways. Sometimes we do things that get in the way of being good trainers because what the horse is doing is so rewarding to us. And we’re not even aware that this has happened until the results are dramatic.

This is all to explain why people get into trouble feeding treats to their horses.

We love our horses. We want them to love us back.

Dogs wag their tails. They initiate games with us by dropping balls at our feet or by doing play bows. They stare into our eyes with adoration. They pant and ‘smile.’

Horses are more subtle. Sometimes they seem inscrutable. A horse who feels safe with you will stand next to your shoulder, seemingly looking out at the distance. A horse who likes you will appear to ignore you when you approach, and will have a sleepy-eyed and droopy lower lip countenance. 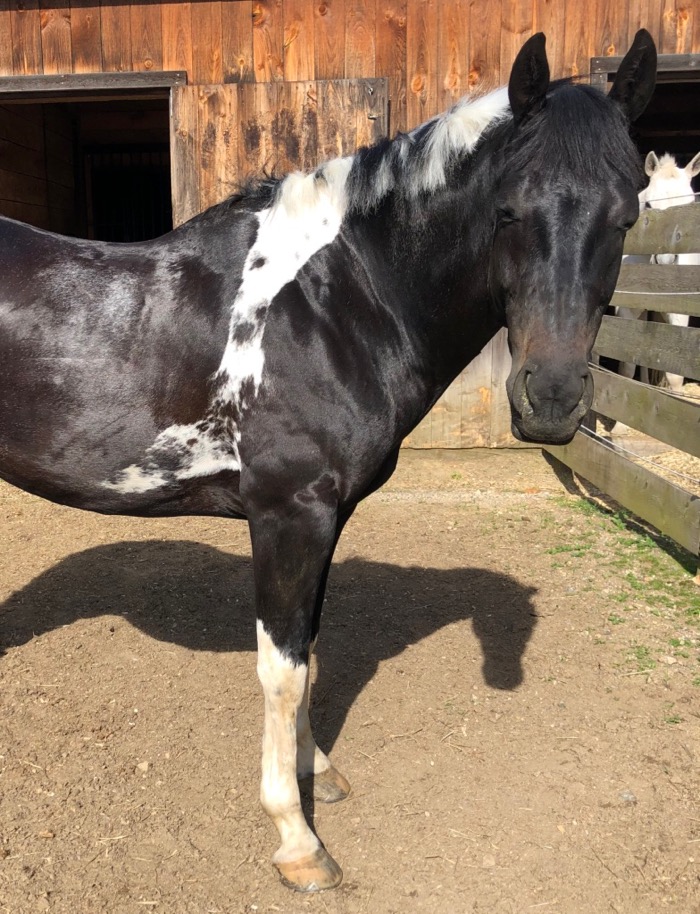 For many people, these sort of understated responses to their presence aren’t enough. They want that alert and expectant expression of a dog, the equivalent of that definitive tail wag. A nicker will do. A horse galloping up to them from the far side of the paddock is even more thrilling to the owner. You want your horse to look eager to have you in their space. To get that behavior all you have to do is unwrap a peppermint. Ears will prick forward and that whiskery, velvety nose will reach out to greet you. It’s all very reinforcing, to you! So you’ll want to give your horse another cookie. Just because. Who’s trained who? 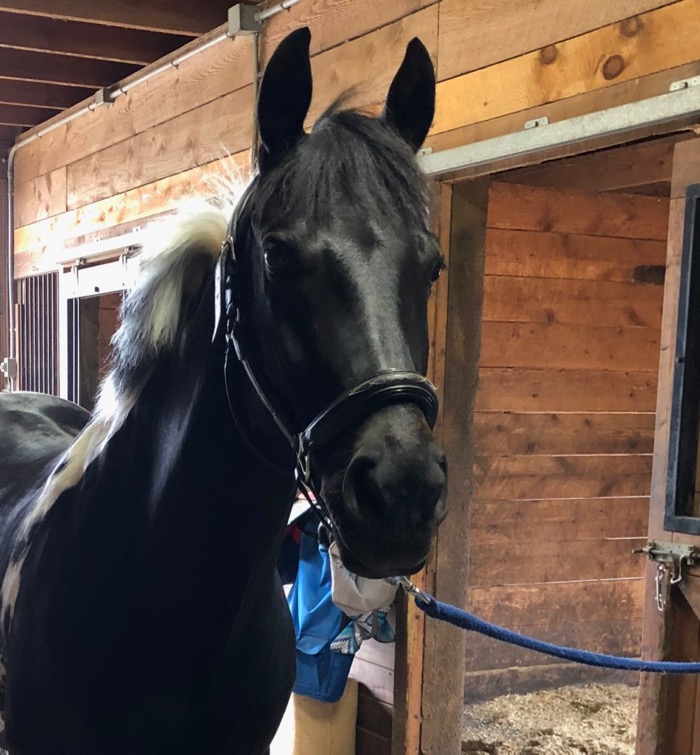 However, in the horse’s mind, there is no “just because.” They want that peppermint. What caused it to appear? If you always, without fail, only feed when your horse is standing still, ears forward, and eyes soft, there’s no problem. But what if the next time you walk up to your horse, you reach into your pocket and the horse hears that crinkly wapper, but you don’t offer the peppermint right away? So, the horse in slight annoyance pins their ears back. At that moment you hand over the treat. Maybe, thinks your horse, if I pin my ears, it’ll make the peppermint appear. What if the next time, as your horse waits for that peppermint to go from pocket to hand to mouth, your friend arrives at the stall, so you take a moment to say hello and momentarily forget about the peppermint. The horse’s ears flick back. He paws with impatience. You unwrap that candy and hand it over. The horse now thinks, if I pin my ears and paw the ground, I get a cookie.

Or maybe you have a big carrot. You break it with a snap. The horse reaches that lovely nose in front of you to get the treat. It almost seems like a horse hug to you. So the next chunk of carrot is given when his head is practically on your chest. Repeat that and your horse has learned to body block you to be fed.

You thought your horse would take the treats in the spirit that they were offered. I love you! You don’t have to do anything for them! You weren’t paying attention to the criteria, but the horse was. The lack of consistency causes frustration, which causes more of the ear-pinning, foot-stomping, nudging behavior. Feed once when they’re behaving like that, and your horse will make a connection. Aha! This works!

I was recently called in to help a horse and owner who had gotten into this situation. Her horse is kept on a dry lot. He’s fed plenty, but the hay does run out between feedings. It’s also rather boring there, in the dirt, and he’s young and smart. The owner visits daily and he looks forward to interacting with her. When she arrives, he knows there’s food in her pockets. She loves him and likes feeding him, and for her that’s enough. But from his perspective there’s no rhyme or reason for when or why she hands over the food, so he does everything that has worked in the past, and he does it hard.

This horse didn’t want to be dangerous. He was simply doing what he thought he had to do in order to get treats. When I greeted him, he swung his head side-to-side. His skull knocked on mine. I put on a helmet. 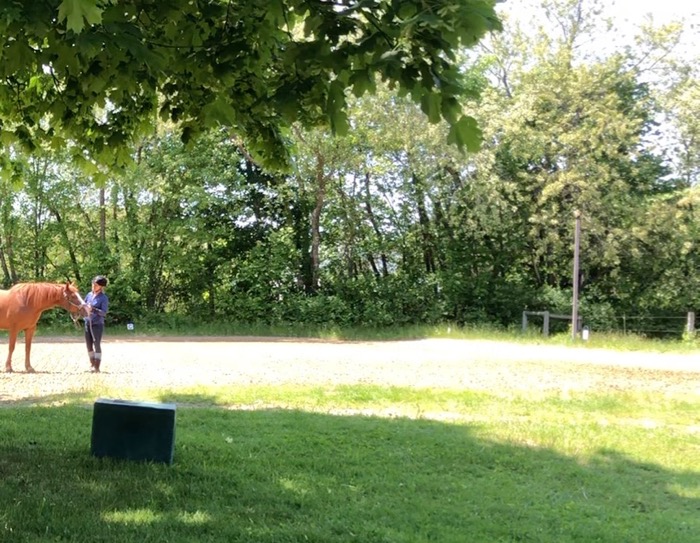 Unlike dogs, horses don’t enjoy being in that over-eager state. Dogs get a thrill chasing after food. Horses prefer it to be at their hooves for the taking. They like eating, slowly, in the company of their friends. And dozing in-between. Being calm and companionable is highly rewarding. Because this horse was both anxious about food, and didn’t know how to relax with his owner, I removed treats from the training equation. (Some horses do enjoy play and different activities, but relaxation should always come first. That’s for another post!)

We went into the arena. He showed me all of his behaviors. Head swinging. Nudging. Ear pinning. Circling around me. I asked him to stand still. I used the halter and lead line to guide him into the position I wanted. It didn’t take anything forceful or dramatic. To tell him that he was behaving nicely, I tried stroking him, but even that proved too exciting. However, he clearly liked it when I did calm and steady breaths while standing by his shoulder, facing forward. I can do that, too! he said, and he stilled and his eyes went soft. I interspersed that with teaching him that whatever was going to be asked of him would be announced first. Before walking on, I’d say let’s go and position my body in a specific way. Before stopping I’d say a drawn-out and whoa. Such a smart and alert horse! He quickly tuned into me. No tugging on the rope was required. This horse, who’d felt dangerous to his owner because he walked over her and dragged her around, was stopping, in a straight line, on a dime, when asked. It took only ten minutes to teach this. You could see his palpable relief that all he needed to be was his sweet and calm self in order to have a pleasant person to do interesting things with. 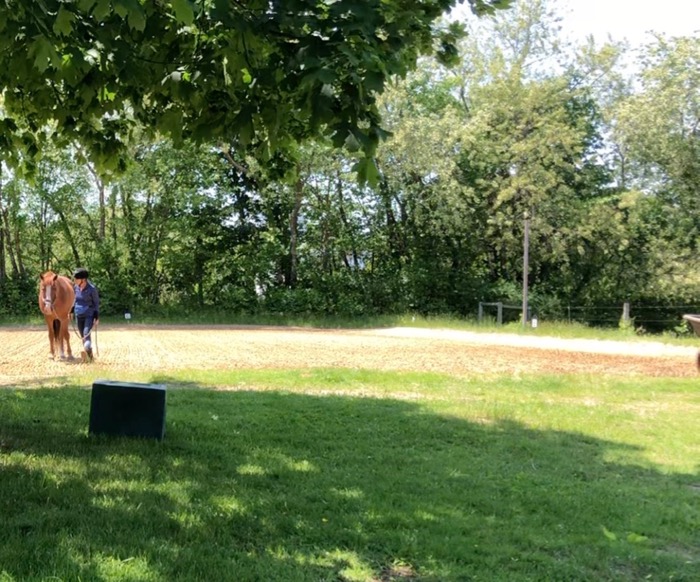 I showed the owner how to communicate in this way with her horse. Very quickly, she too was able to lead, stop, and stand in contentment with her horse.

For now the owner is not going to feed treats by hand. Her homework is to continue to have these peaceful moments in the ring with her horse. Then she can take him out to the lush green grass (all with the same clarity for the horse as to how to be polite to get what he wants. I discuss how to train that here.)

Later on I can teach the owner how to introduce hand-fed treats safely and so that everyone enjoys it. But that’s for another day.

(For more about how to use food safely and effectively in training, check out the category ‘training with food’ on the right of this page.)