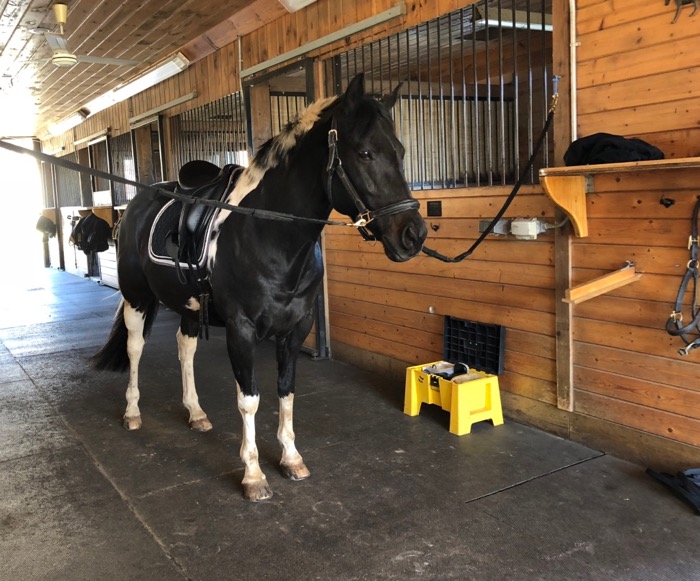 But then, last winter, we had two almost identical and serious incidents in the space of a week. He got zapped with static, startled backwards, felt pressure on his poll (which he’s always hated), panicked, and yanked to free himself until he broke the ties and flung backwards as if hurled out of a slingshot.

After that, Tonka was fearful about being in the aisle where it happened, and it took me a couple of  weeks to get him to stand calmly, even without anything attached to him. 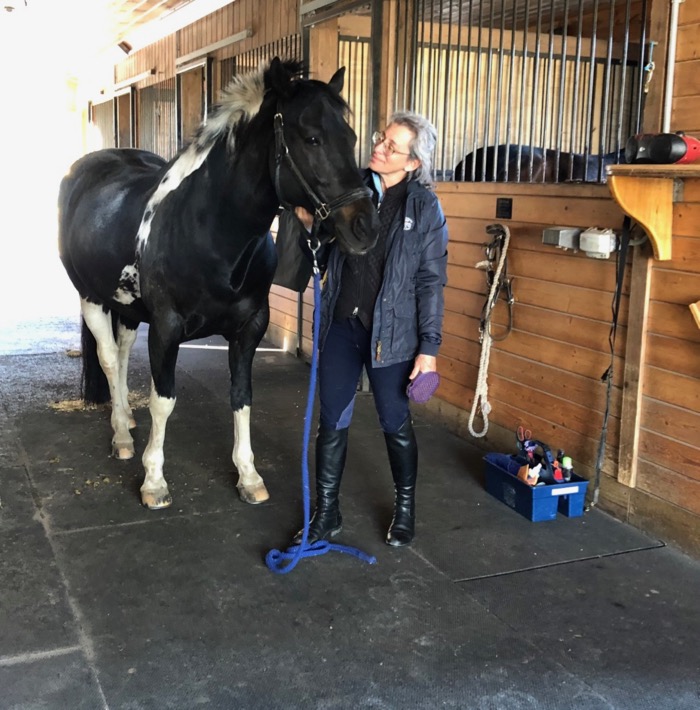 I’ve incrementally introduced him to cross ties again, but can tell that there remains underlying fear.  He still looks worried when I reach up to brush his neck – this is where he was zapped by static. 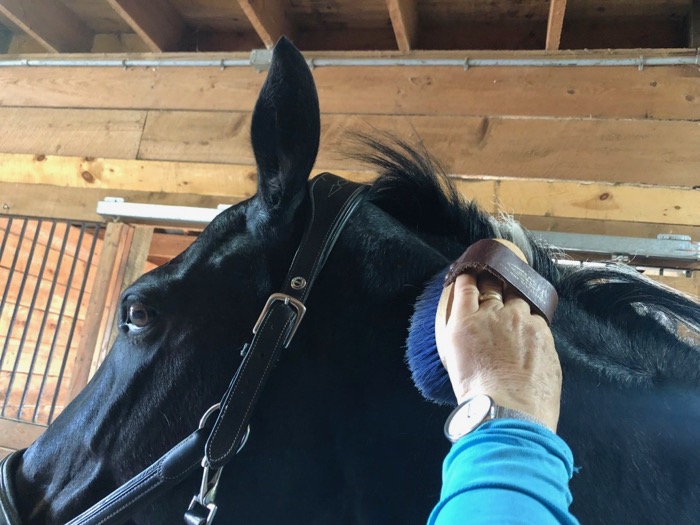 I don’t want to risk a repeat of Tonka panicking when restrained, so I ground-tie him instead. He’d been taught by his previous owner to stand still when his lead is dangling on the ground, and I’ve added a highly reinforced stay to Tonka’s repertoire. In my previous barn, I could leave him in the aisle and go and get something I’d forgotten in the tack room (which happens all too frequently!) 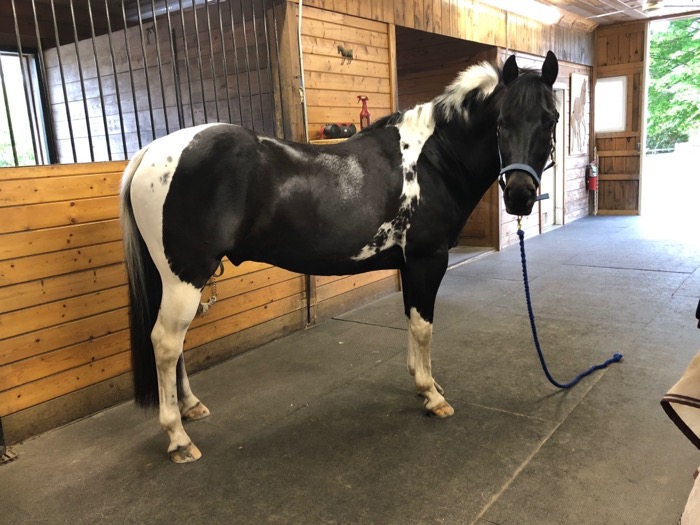 But the new barn in Maine is much bigger and there’s always a lot going on. There are young girls and ponies in the aisle, staff mucking and sweeping, and often a farrier at the end. 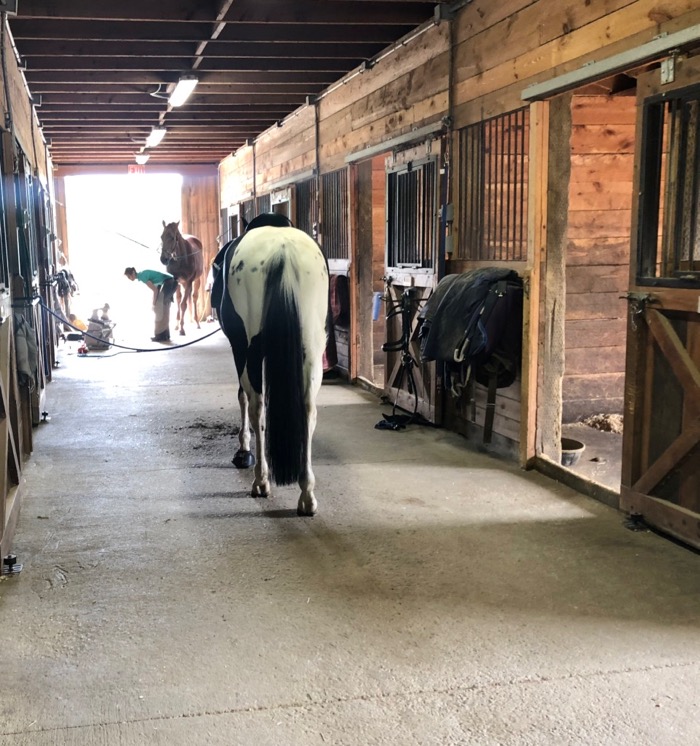 In the morning, the staff dress each horse according to what they need (boots, fly masks, etc) and then lead them out to the paddocks. They usually do the dressing in the cross ties. They’ve been great about not tying up Tonka (and Tonka has been great about behaving impeccably) but it’s not fair to them, or to the others around, to have a potentially loose horse in the aisle.

I’ve come up with a compromise.

Tonka’s lead rope is quite long. I can loosely wrap it once over the blanket bar. 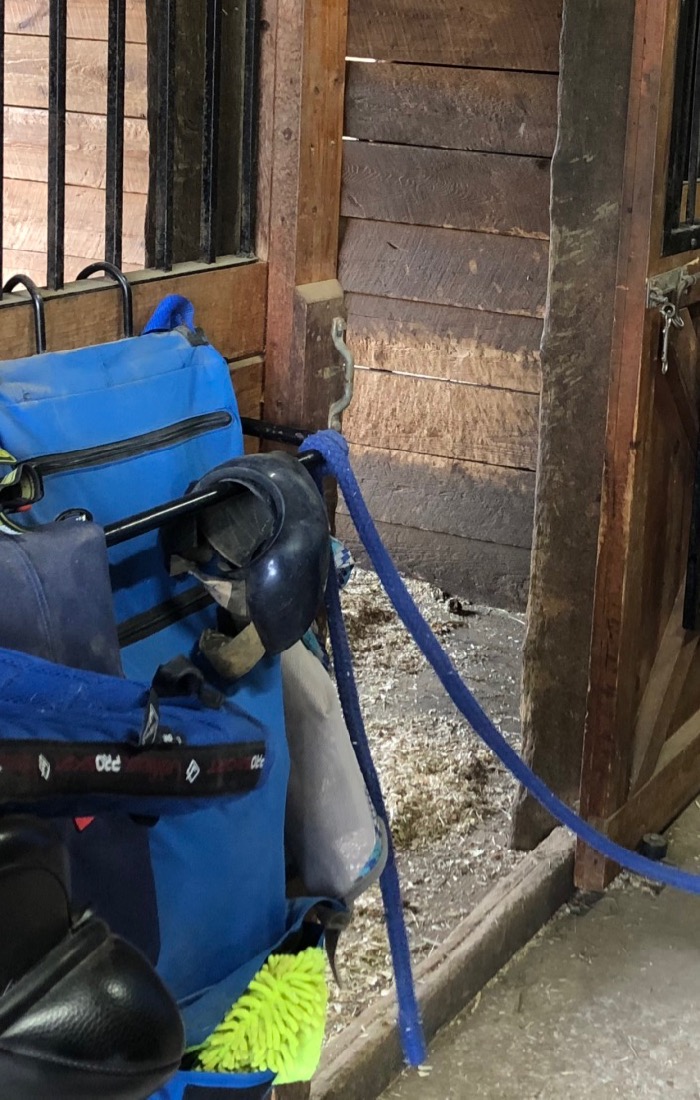 This gives Tonka a clear message to not move. It gives the staff a way to control him if need be. It gives others a visual clue that Tonka is staying put in that place. If Tonka does panic, he can free himself without having to jerk backwards and break something. 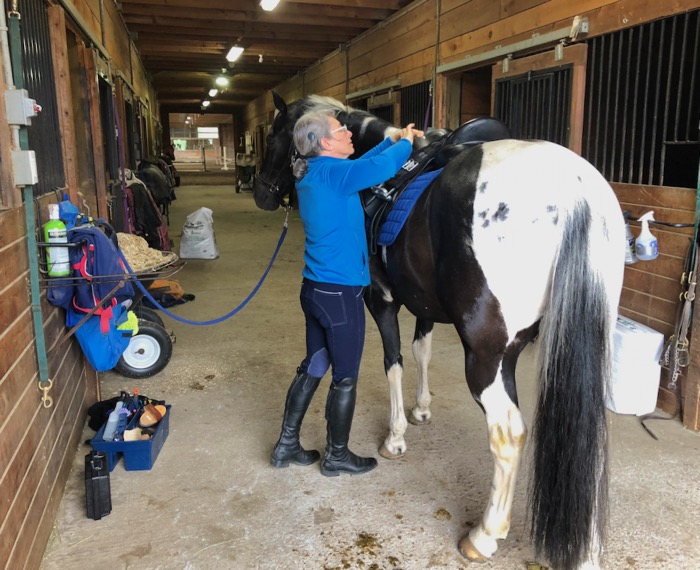 It also helps to get Tonka, once again, comfortable with being restrained.

Tonka has to learn to accept restraint in other places, too, and the work that I’ve done in the aisle has to be thoughtfully done elsewhere. I can tie Tonka to the ring on the outside of the trailer. However, I’m using a Kensington Protective Products Safe-T-Tie Horse Tie — Revolutionary Safety for You and Your Horse — With a Quick Release Design For Use When Safety is A Concern — Sold 2 Per Pack (Black), just in case. (Not a bad idea for any horse!)

I’ve been “tying” him in the wash stall, too. Notice that the lead rope clip is on the halter’s bottom buckle. Cross ties are attached to the hardware on the side of his head, so next up is to get him blasé about it being attached there. A seemingly small thing like that can make a massive difference in the attitude of the horse. When dealing with a horse who’s been through trauma, breaking the training down to these smallest of steps leads to a solid base of success. 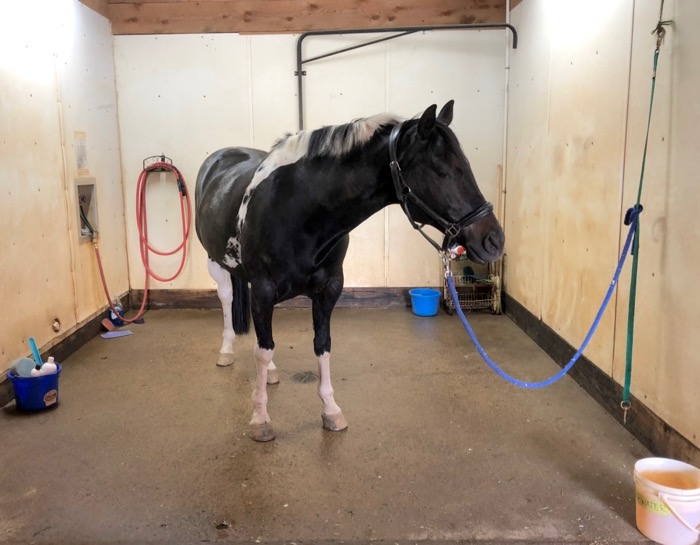 I’m pleased with how this training is progressing. We can take our time. There’s no static to provoke fear in the summer. Meanwhile, I’ve been thinking about how to reduce the static shocks come winter. More on that when that season arrives!