Sit in a field with horses. Listen. You hear them tearing up grass with their teeth and chewing. A swish of a tail. A hoof stomping the ground to shake off a fly. There’s rarely verbal communication going on, and when it happens, it’s brief. Perhaps a horse is out in a paddock on a windy day, and his friends are still in the barn.

Something moves in the woods and an alert horse lifts his head and orients that direction. Others follow his lead. With a breath, maybe a snort, he says that it’s nothing to worry about. The others agree. They go back to grazing. All is peacefully quiet again.

Go into the barn. The radio is on. Two women are laughing. Someone else yells door! as she walks in. A gelding is in the aisle in cross-ties. His owner talks to him, at the same time, she chats with someone nearby, then coos hello to the barn cat and squats to pet it. What she says to her horse is lost in the din, and in any event, she didn’t wait to see if he had a response. We humans like to think that our words matter, but words aren’t how our horses talk to each other. We expect them to be bilingual – to go from horse language (which isn’t sound-centric) to paying attention to the torrent that comes out of our mouths.

Words are unintelligible to your horse unless you have systematically and consistently trained the horse their meaning. No starts out on the same blank page as yes (or a nonsense word like doodleoodle, for that matter.) It’s only the startling sound of no sharply yelled out, or the associated flick of the whip, or a yank on a halter, that teaches the horse that the word no means don’t do that.

Conversely, telling a horse that she’s a good girl doesn’t mean anything either – unless it’s paired with something the horse enjoys. When you’re riding and say good girl, do you do anything to give those words value? Do you stop and give your horse a break, or a treat? I’ve seen plenty of horses trudge on despite praise from their riders, because those words from the saddle are just more chatter in the background. Sometimes, though, it does seem as if the horse likes hearing words of praise. If you watch carefully, you’ll see that it’s because when saying them the rider has relaxed, which makes her ride with more suppleness. Or his hands unclench, so that the reins are held with less tension. It’s the rider’s softness that’s rewarding to the horse, not the words themselves. I often see this happen when watching riding lessons taught by teachers that I call the “unrelenting ones”. Such a trainer is ceaseless in their criticism of their students. When they finally say, “There, that was the stride! Tell your horse good boy,” the rider is so relieved that she stops pressuring the horse. The horse quickly learns that good boy – said by trainer or rider – means there will be a moment of calm.

You can teach your horse that words like good boy have tangible meaning in a more direct and effective way. I’ve done this by saying good boy in a happy voice, and then feeding Tonka a carrot. I do this when he’s in his stall, or the barn aisle, or the paddock, when we’re not doing much of anything. Good boy takes on a positive association that carries over to when I need to let Tonka know that he’s on the right track – maybe when we’re crossing a bridge, or he’s just done a beautiful canter stride. The words are associated with the prospect of good things to come – and there will be – I’ve also taught Tonka that he’ll get tangible rewards when we’re done with the task.

But what about comforting your horse with singsong murmurs, or saying a drawn-out easy when your horse is scared? Such tactics do seem to work. Again, I think that it’s not the words, themselves. When I was a teenager, I was taught to recite nursery rhymes out-loud when my horse was nervous. I still do it to this day. Why? Because when I’m singing Twinkle Twinkle Little Star, I breathe with regularity. My horse slows down to match the song. My jaw unclenches, and his jaw does, too. I feel a little silly. That my horse doesn’t match (thank goodness!) but he does notice that I don’t think the threat is serious.

I was asked why I don’t talk to Dolly, the ancient pony that I wrote about in my last post. People wondered whether I could use my voice to reassure her and gain her trust. Maybe that would work for another trainer, but not for me. I find that talking gets me focused on human-centric forms of communication. It gets in the way of me noticing a shift in the weight of a hoof, a twitch of an ear, tension at the base of the tail. The quieter I am, the more I can listen.

Also, I don’t know Dolly’s history. Maybe someone said good girl to her, while doing a procedure that hurt. “Good girl” means whatever the history associated with those words mean, not what’s in the dictionary.

Dolly and I do talk to each other in our respective languages. I say her name. She whinnies. But notice in this clip that the words are few and meaningful.

So, I train quietly. At least I try to. I do talk to Tonka. I’m human, and I’m a writer. Words are my life. They bubble out of me. But, I try to make clear the times when I’m babbling, and the others when I’m using words that matter. The words that I’ve taught him the meaning of, that I use as cues, are kept in reserve for when they’re needed. I use them with clarity, so that Tonka knows when my voice is worth paying attention to. That said, Tonka has probably come to look forward to the babble because he knows that I never do it when I’m in work mode!

I think that using words judiciously enables all parties to listen to, and to understand each other, in a more connected way. Try saying hello to each horse in your barn, but without saying a word. Tune in to their nuanced body language and flow with it. I think you’ll see that the horses appreciate your silent, but focused, communication. Then, when you do use words, imagine that you’re teaching your horse a foreign language. Do it with patience, with consistency, and in a way that makes it relevant to their lives. Then you’ll both be bilingual. 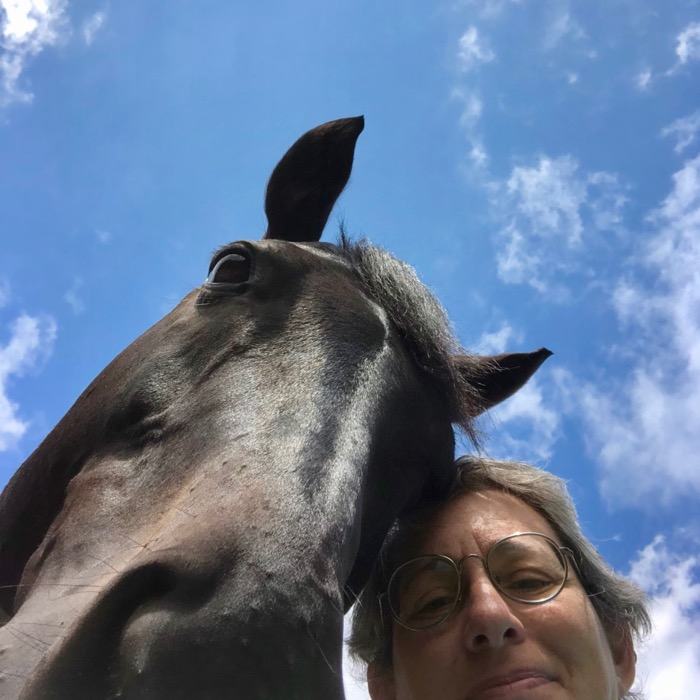