At one time, Dolly was the pony of every horse-crazy child’s dreams. Snow white with big dark eyes. Petite. Pretty. Likely purebred Welsh. You could imagine her a unicorn. She lived in a small field behind her people’s house. The children rode her, but didn’t do pony club or 4-H, so their knowledge was limited. Still, the pony had her yearly shots, dental work, and regular hoof trims. Dolly had the company of a Shetland. They never got along. The Shetland died. Dolly has had the paddock to herself ever since. The children grew up and left, their mother continued to care for Dolly. Years went by. The humans in Dolly’s life had their own stories to deal with. Although the pony was always fed and watered, the only time that she was handled was for procedures like shots and farrier work. Eventually, Dolly had enough of that and refused to be caught.

The owner, Kathy, tried to get help. She called a local farm who told her to withhold food until Dolly came up to her. The idea of starving her pony in order to handle her didn’t set well with the owner. Kathy looked at on-line videos which detailed how to “move the horse’s feet” until the horse gave up. The owner recognized that chasing a horse, especially a pony in her third decade, is not the way to gain back trust. She asked around some more, but couldn’t find anyone to help. Time passed. Other issues in the owner’s life were more pressing. We don’t see familiar objects with clear eyes, even things we love. Dolly seemed okay. But Dolly kept getting older. Now she’s thirty-one and is in great need of TLC.

Kathy found me through a listing for an animal behavior course that I was teaching locally, and asked if I could catch Dolly so that she could give her pony the care that she requires. Kathy told me that it’s been two years since anyone has touched Dolly. I discussed my methods. I cautioned that it would seem like I was going slowly, but that in the end, we’d be able to handle the pony in a kind and stress-free way. The owner said yes.

For an ancient pony who hasn’t had hoof trims or medical care in two years, and who has wavy teeth (what teeth she still has) so that she can only eat a pelleted ration designed for old horses, Dolly looked surprisingly well.

We took stock of each other. 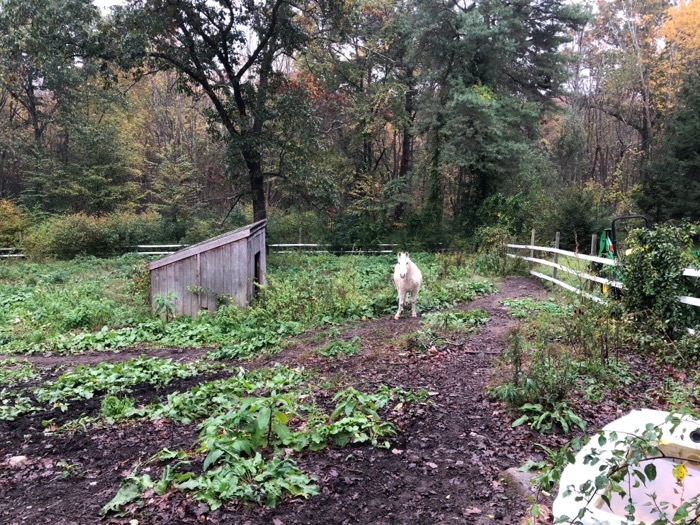 She took a few steps closer. 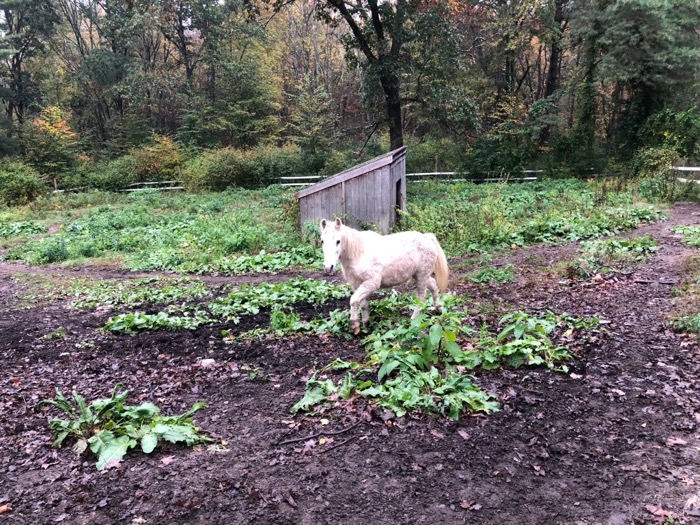 I walked towards her to see what she would do. When I headed towards her, she shifted her weight away. When I stopped, she stopped. When I continued my approach, she walked off. It wasn’t reactive, but it was thoughtful and effective!

Dolly’s message was clear, and I respected that. From the first day on, I gave Dolly control over how close I’d get. If she as much as turned her nose away from me, I’d stop approaching. If she oriented towards me and looked curious, I’d very slowly step nearer. That kept her from putting a lot of distance between us, but it wasn’t going to change her mind about not interacting with humans. For that, I needed something that she valued. I guessed that she would enjoy apple and carrot pieces, and I was right. (I’ve switched to only apple, as it’s easier for her to chew.)

I don’t use food as bribery. I didn’t set it out to lure Dolly to me. Instead, I tossed apple pieces to her in response to what she did, and at first what she did would have been a challenge for someone who doesn’t know horses to even see. You know the expression, “before you can run, you have to learn how to walk?” I had to think through what came before walking, and reward that. Before Dolly could come to me, she’d have to look at me, so the first apple that I threw her way was for a glance in my direction. Then, it was a head turn. Then a swing of the neck to face me. Then it was a weight shift in my direction. Then a step. This training entails many, many tiny increments; to be effective, I had to continually increase the criteria but in a way that gave her confidence that good would come from engaging with me. At first I tossed the treats right at her hooves, then I placed them to encourage her to move towards me. Soon, even the movement of my arm doing the toss had a positive association for her.

Dolly was more comfortable with me on the ground, and so, each visit, I donned rain pants and sat in the cold mud. 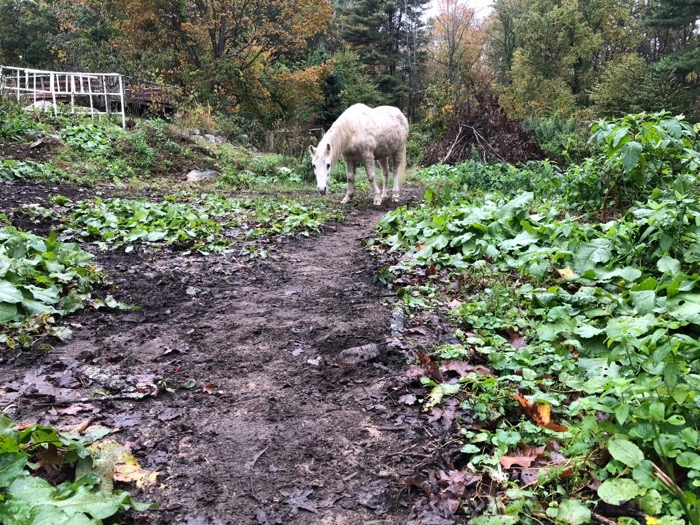 Progress is never in a straight line. Occasionally, I inadvertently put Dolly out of her comfort zone and she’d disengage from the session. When that happened, I’d calmly, slowly, get up and leave. I kept the sessions short. This work was fatiguing for her, and she’s been on a limited diet and I didn’t want to upset her digestive system.

Most of this work has been done by me, but the goal is to have Dolly comfortable with other people, especially her owner. So, in the third session, I had Kathy join me. Dolly was wary, so I reduced the criteria. She didn’t have to approach – just orient her body towards us. When she looked at us from a distance, I tossed the apple. (My tossing skills increased each session!)

I had the owner sit, too. Dolly liked that view of Kathy better, and walked up to her. Even a weight shift from Kathy or me towards Dolly would have sent her away, so we sat still. Patience. 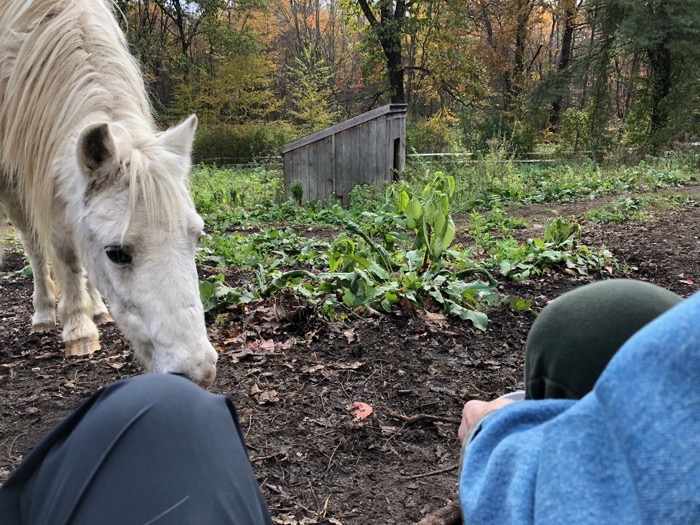 In the fifth session (less than one hour total with the pony), without throwing the apples from a distance, Dolly came close to me. From a few feet away, I did a few repetitions of tossing apples for her when she focused on me. Then, I held out an apple and she sniffed. I think she touched my hand without meaning to, and gave a big snort. Her snort! made it clear that touching a human made her nervous. I didn’t insist that she do it again. But I did hold out another apple chunk, and when she touched that, I dropped it. She ate. I repeated my offer of apple chunks. Each time, I held it a couple of seconds longer, so that she became comfortable breathing near my hand. Still, I kept dropping the apple for her so that she remained in her comfort zone. At that stage, eating out of my hand would have been too scary for her. I didn’t ever want Dolly to feel conflicted that she had to do something unpleasant to get the treat. 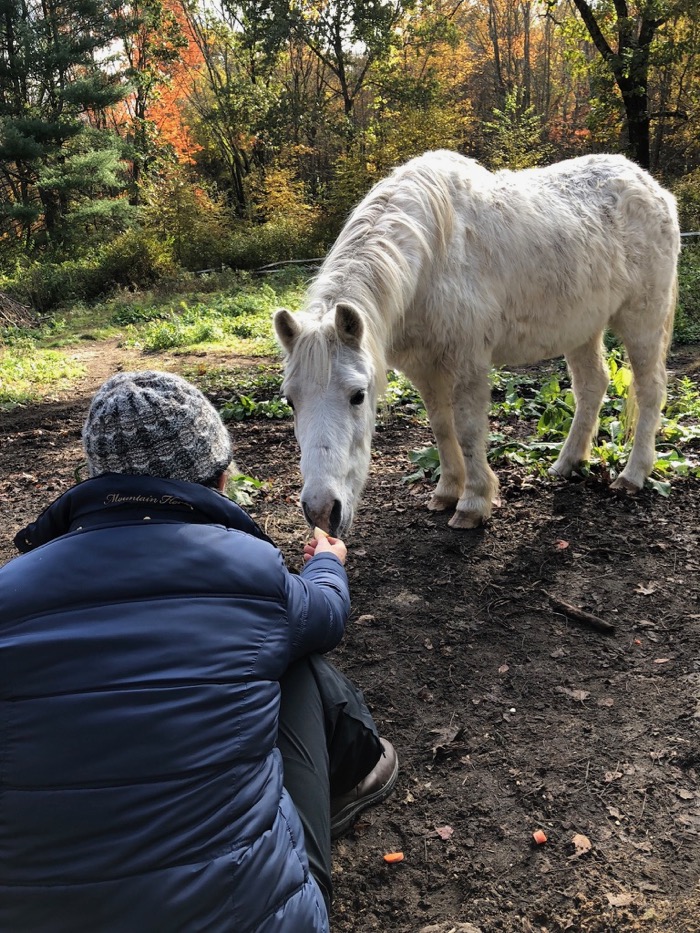 After a few repetitions like that, I increased the criteria again, and fed Dolly from my hand. At this point, she was not conflicted at all about doing this!

Dolly even let Kathy feed her. 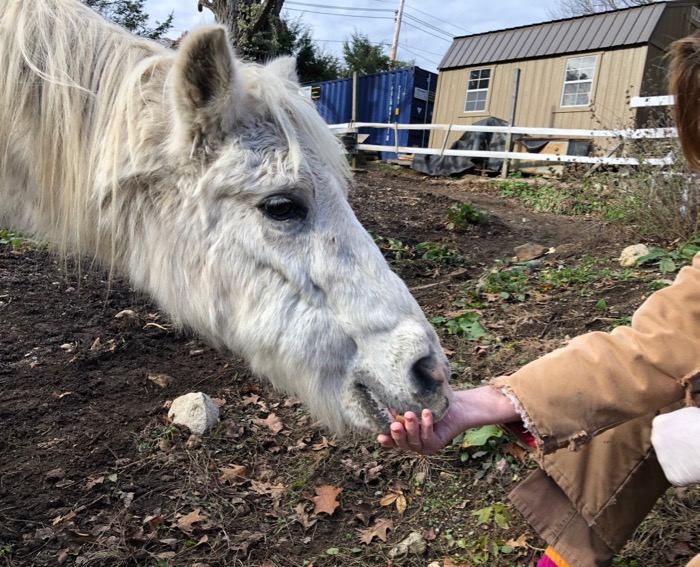 Now that Dolly was at ease being so close to a human, and anticipating that good would come of interacting with me, it was time to add the next piece – touch. I started with a tiny stroke of the nose, and then fed apple. I carefully followed Dolly’s lead, and touched her only as much as she let me know she was comfortable with. I watched for any tension and stopped if I saw an inkling of that. (Notice in the video how she tucked her head back at first, but her weight didn’t shift.)

Besides astute observational skills, being an effective and kind trainer requires a lot of self-discipline! I had to keep myself from handling Dolly any more than this. It’s so tempting to reach out! But, this slow approach, dictated by what the horse tells you is okay, is why this is now my view of Dolly. 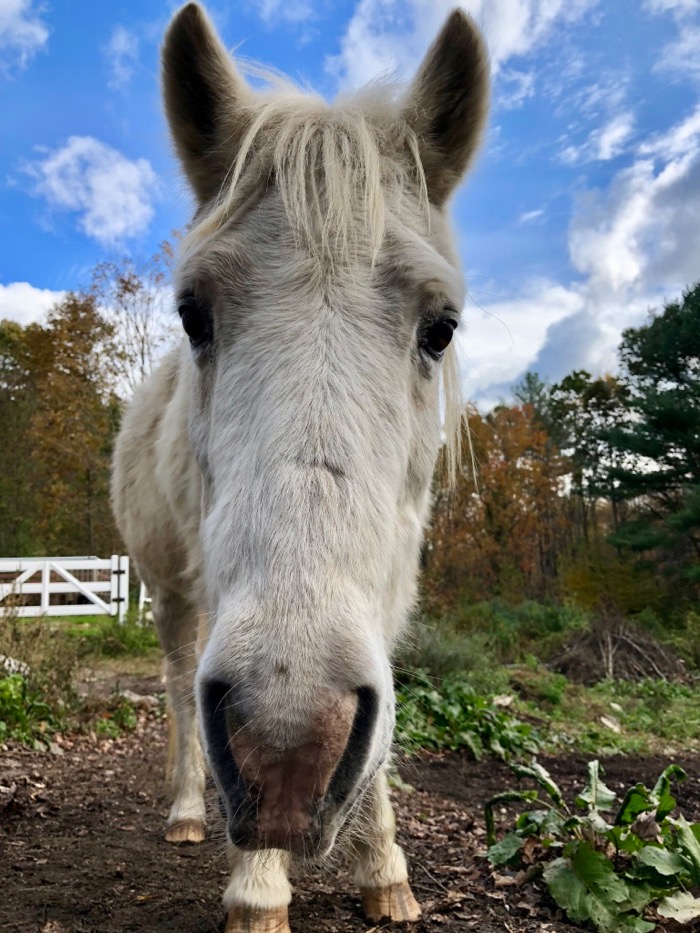 In only nine sessions (less than three hours total), we’ve made tremendous progress. I’ll talk more about future goals and how we’ll get there in upcoming posts.

11 thoughts on “Touching the Uncatchable Pony”