As I wrote about recently, Tonka was going great, and then he wasn’t. All four legs were working fine, but instead of going willingly, he felt tight and recalcitrant. In this video clip you see him putting his nose in the air, sinking his back, and refusing to trot. I squeeze, he resists.

The only noticeable physical problem that I could find was that he was sore under the left side of his saddle. A break from riding made it worse. Exercise in an even tempo, in a balanced frame, was what he needed to feel better. I knew that, but Tonka didn’t. It’s like when your back hurts and stretching eases the pain, but the stretching itself isn’t exactly fun. You wouldn’t do it if your physical therapist didn’t insist.

To get the benefits of movement, Tonka needed a break from the demanding dressage that we’d been schooling. So, I reduced the criteria when riding in the ring. I cancelled our entry to a show, backed off the first level work and returned to the basics of training level. There was improvement, but still, when Tonka first started off, he tried to put the brakes on.

What you also see in the video is my response. We halt. I wait until neither of us feel tense. I wait for my breathing to be calm. I can’t convince him that going forward will be okay if I’m talking to him from a frustrated place.

I also stopped to reassess. What could I do to make this easier for my horse? The footing outside is loose and deep, so we went indoors where the footing is perfect. At first, Tonka was wary and protected his sore muscles by bracing with the underside of his neck. The rest of his body language sent me a clear message, too. He laid his ears back and flicked his tail in annoyance. 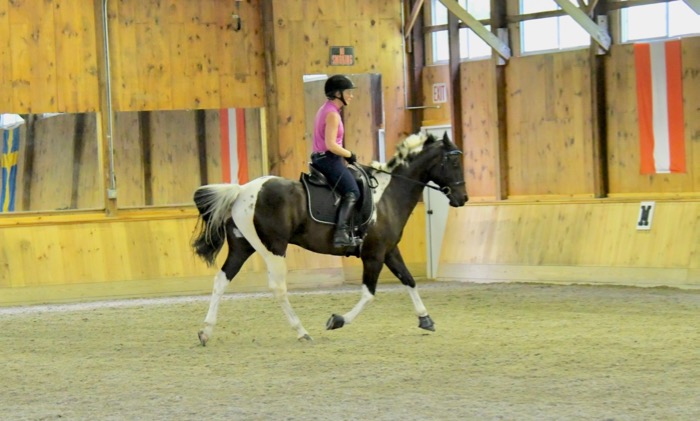 But I didn’t give him the option to stop or to mosey along. Neither of those things would make him feel better. Instead, I sent Tonka forward with my leg, and softened when I felt him relax through the neck and back. In behavior terms, it’s classic pressure and release. It’s only effective if the rider’s timing is precise. I like to think that (mostly!) mine was. For two weeks we had slow but steady improvement in Tonka’s ability to move with suppleness and energy, but he wasn’t 100%.

On Sunday, Tonka started with a balk, but then moved forward off of my leg. After about fifteen minutes of work, I felt him figure it out. It’s almost as if he shrugged off the twinge on his left side, and realigned his legs to his spine. He went like this: 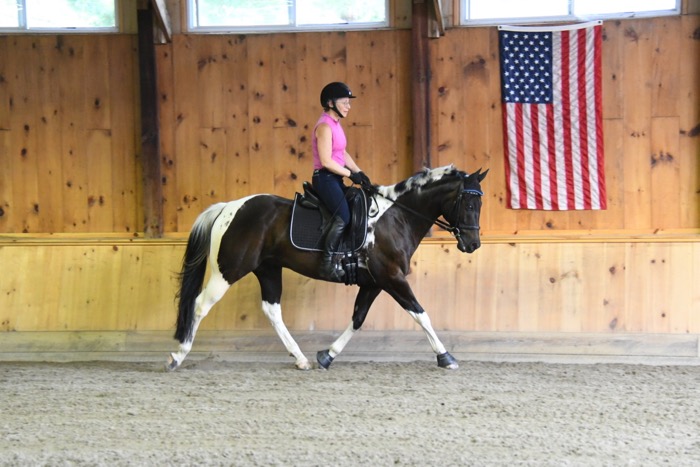 This is how my horse is now consistently moving. Wow.

My vet has has declared that Tonka is sounder than she’s ever seen. Even so, on Friday Tonka will be getting a shock wave treatment to try to heal the remaining soreness in that spot on the left. I’m having the saddle fitter out, just to make sure that there’s nothing detrimental going on there. I take lessons to improve my position, and I also stretch and do yoga , so that I don’t impede his way of going. I want to help my horse to be as athletic and enthused as possible.

It’s difficult to know, when your horse is unhappy in their work, what to do. Sometimes they need rest. Sometimes they need medical attention. Sometimes the rider needs to ride better! Sometimes the horse needs to push through their discomfort to find their athletic self. Usually it’s a combination of some or all of the above, and plenty that I haven’t mentioned. Partner with a horse, and your days will be filled with questions, doubt and second-guessing. Which is why, whenever there is a glitch in the progress – and there are always glitches – I halt, take a breath and reassess. It never hurts to return to basics. In this case, taking one step backward led to three steps forward.

8 thoughts on “One Step Back, Three Ahead”