Tonka and I have been having a good summer. He’s been happy and sound. We’ve been competing – successfully! – in the dressage arena. Dressage is an incremental sport. You achieve one movement and you work towards the next, each builds on what came before and each is a slight bit more challenging, mentally and physically. Some horses, with their uphill forehands and necks that arc out of their shoulders are innately suited for dressage, Tonka is not.

This is what he looked like when I brought him home in December of 2013. So adorable! 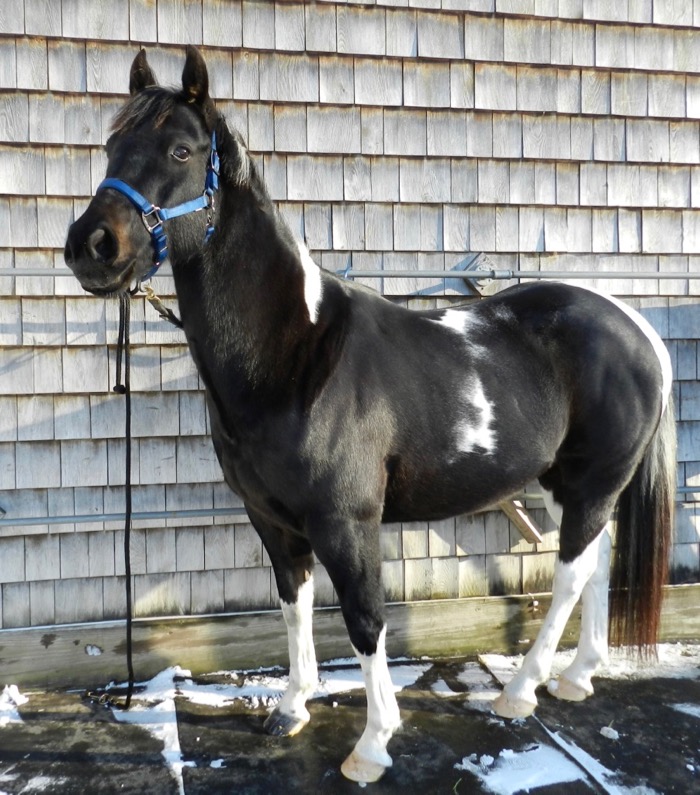 But note how the underside of his neck is muscled, not the crest, and his back sags up to his higher-than-withers hindquarters, forming a U-shape along his entire topline. With this physique, carrying a rider is doable, but certainly not with power or cadence. One reason that I decided to do dressage, and not just stay on the trails, was to get Tonka fit and balanced, so that we’d both be happier, wherever we were.

It’s taken some time and a lot of slow work, but Tonka now looks like this. See how now his neck comes off the shoulder in an easy arc? And how his back is muscled all the way across the loins and into his croup? Because of that, he’s able to stand with all four legs squarely underneath him. 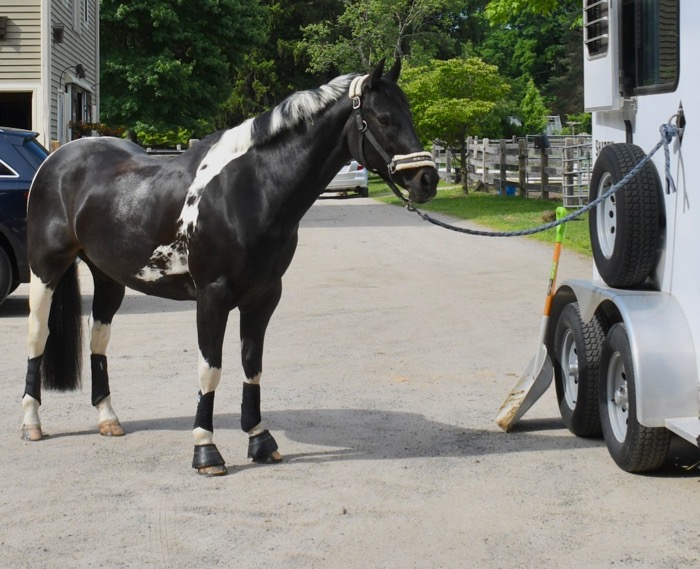 Tonka isn’t a fancy warmblood that goes with a lot of air under his toes. However, he can move like this, and win at First Level, Test 1. My trainers think that we’ll be ready and able to compete at Second Level next season, which is a huge vote of confidence for my little horse, and speaks to how willing and athletic he is. 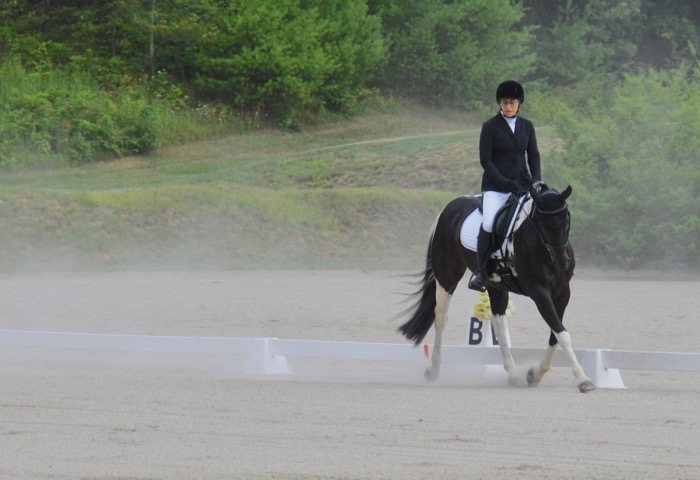 So, the other day, when I asked Tonka to pick up the trot, and he braced with the underside of his neck and hollowed his back, I took note. These ugly moments can happen. Sometimes Tonka has to figure out how to move forward in a way that is both comfortable for him, and athletic enough to meet my criteria. Sometimes I do pressure him to push past his recalcitrance and almost always he says Oh, I get it! and embraces the new way of going. 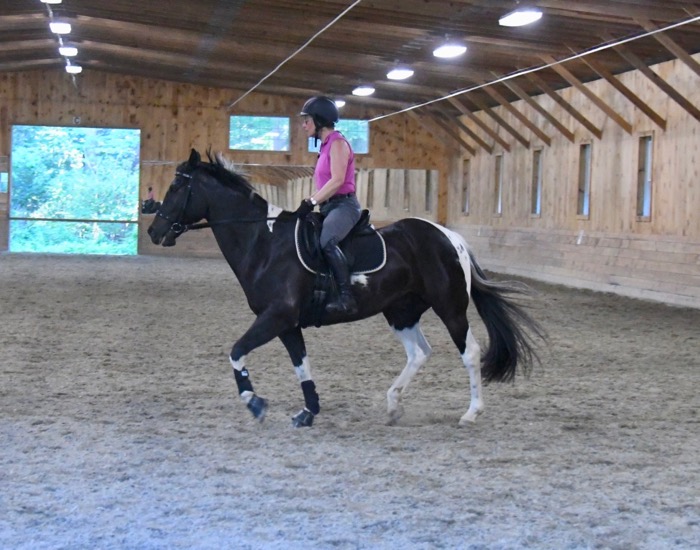 But if that ugly moment becomes more than a couple of strides, I back off, let him stretch, and try again. Usually, we can get right back to work and he goes happily along. (The moment that Tonka correctly does the movement that we’re working on, I let him know with a sound he’s been trained to understand means yes! and we stop and he gets a cookie. But that’s another story.) 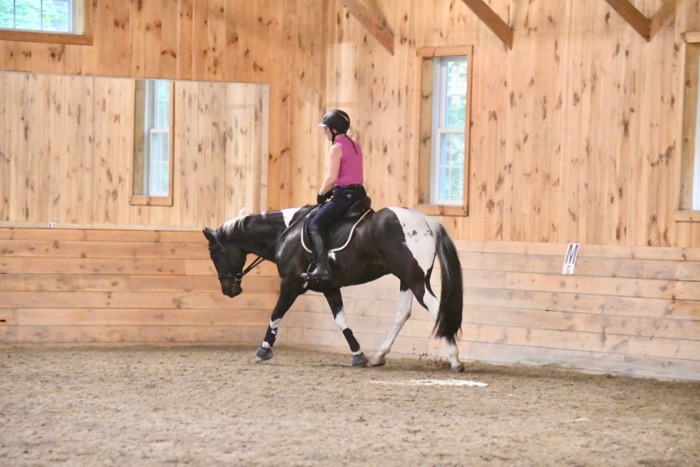 Once in awhile Tonka isn’t into the challenges of the ring work, and the whole ride feels a tad off, but we never have two sessions in a row like that. When, this week, on the second day, he was still hesitant to move from a balanced walk into an easy trot, and he only did so after balking, I knew something wasn’t right. Once trotting, Tonka was sound and comfortable, but it was getting there that was tough for him. I know the feeling. Every morning I do a yoga video. The other day, I did one for a tight upper body. (You’ve probably noticed that I round my shoulders when riding. That’s due to a bum shoulder and weak back which I’m trying to remedy.) I overdid the yoga stretch, and now whenever I lift my left arm in a certain way, I have a painful twinge. I think that Tonka has a twinge somewhere, too.

I gave him a massage with his favorite rolly ball Tough 1 Rubber Jelly Massage Mitt Purple. He was a tad sore on in one spot on his back, and he really leaned into it when I curried the base of his neck. 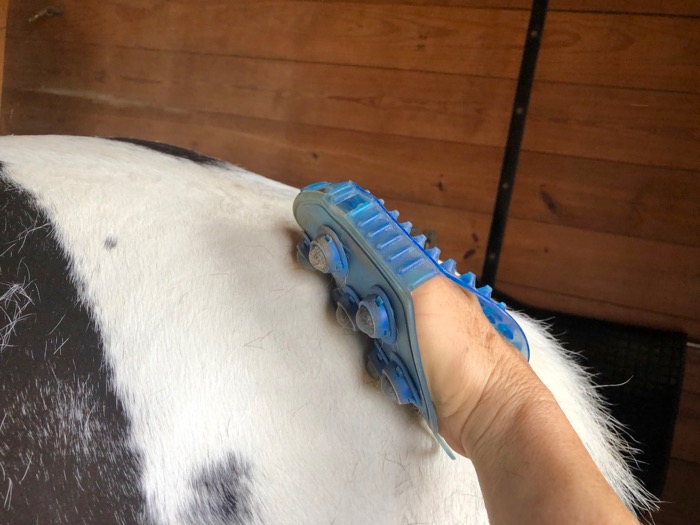 We’re scheduled to compete in a show this coming Sunday. It was going to be our first attempt at First Level Test 2, which includes leg yields and several 10-meter half-circles. I think Tonka would be sound enough to do it, (and his leg yields have been perfection!) but I scratched. Tonka was telling me that schooling in the ring didn’t feel good. If I don’t listen to that, not only will I lose his goodwill and cooperation, but I could push him until he is truly lame.

So, yesterday we trailered with a friend and got out into the woods. 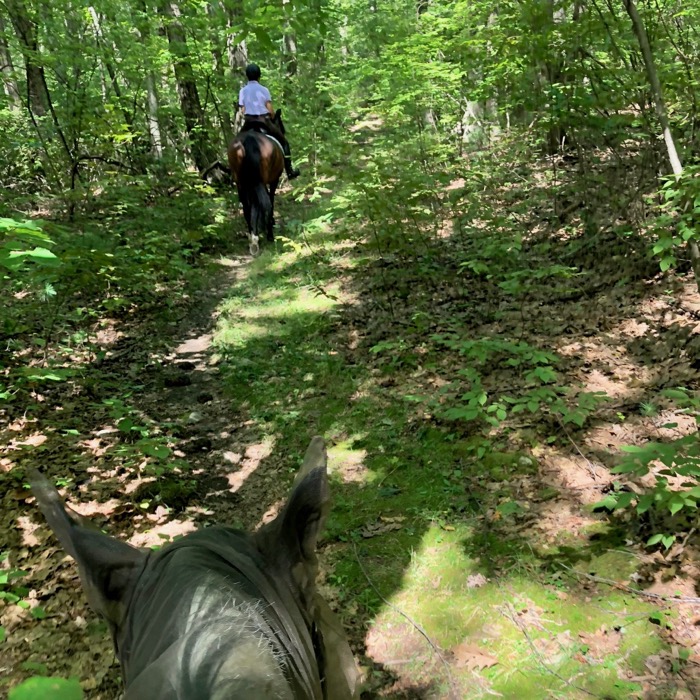 And then spent a half-hour grazing in the hay field. 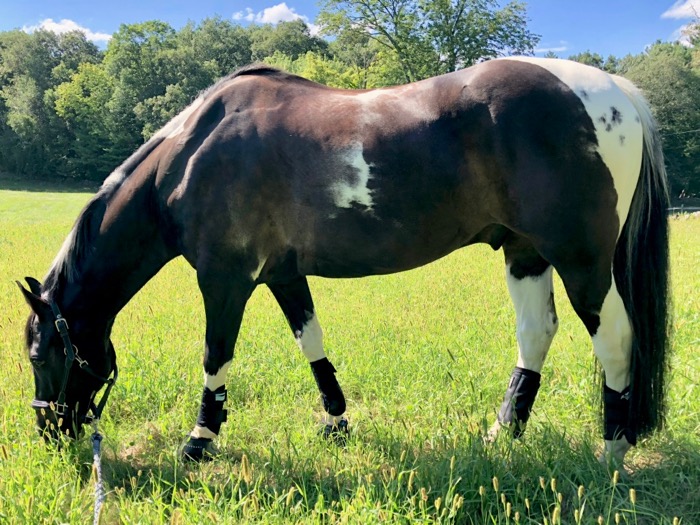 Like with my shoulder, not moving isn’t good for Tonka, so we’ll be back in the ring today. We’ll start with at least ten minutes of forward and loose walk. Then we’ll ease into the trot and do big sweeping circles and feel out where the stiffness is. I’m optimistic that Tonka will be back to the challenges of dressage soon. If not, the vet will come and take a look. But, hopefully, Tonka has told me early enough, and I heard him soon enough, that it’s easy to remedy. 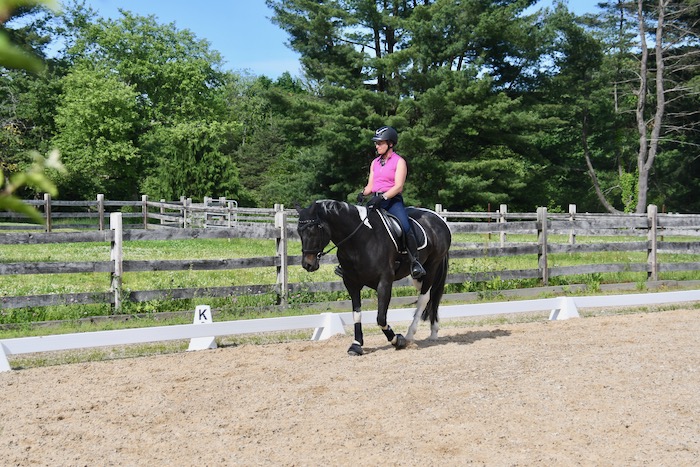 In the meanwhile, the weather is beautiful, the deer flies are gone until next year, and we’re going to enjoy this break from the show season!

6 thoughts on “Knowing When To Ease Up”