I have a friend who’s been struggling to be in balance with her horse. The word balance can mean so many things. You can define it as the measurable even distribution of weight. Or it can refer to keeping the more metaphysical elements of life in proportion: work and relaxation, acceptance and striving. Trina was having issues with all of these things.

Her horse, Cider, is 22 years old. His mind is steady, he’s bold and safe under saddle, and he is a decent chap to be around on the ground. But, like many senior horses, his soundness is compromised. A few years ago, he developed some changes inside of his hoofs which can cause pain and lameness if not treated. Trina’s farrier and veterinarian worked together, so that Cider remains serviceably sound. He’s a little gimpy when trotting to the left, but is still delighted to get out on the trails.

Unfortunately, life in New England means that there are stretches of bad weather and terrible footing, and Cider has to do ring work, too, in order to stay fit and sound enough to have the active life that he enjoys.

Recently, neither Cider nor Trina were eager to spend time in the ring. At the end of a ride, Trina’s shoulders and hands ached. Her horse’s face showed signs of distress. Trina asked me for help.

This is how they looked when I watched them go at the beginning of our first lesson. 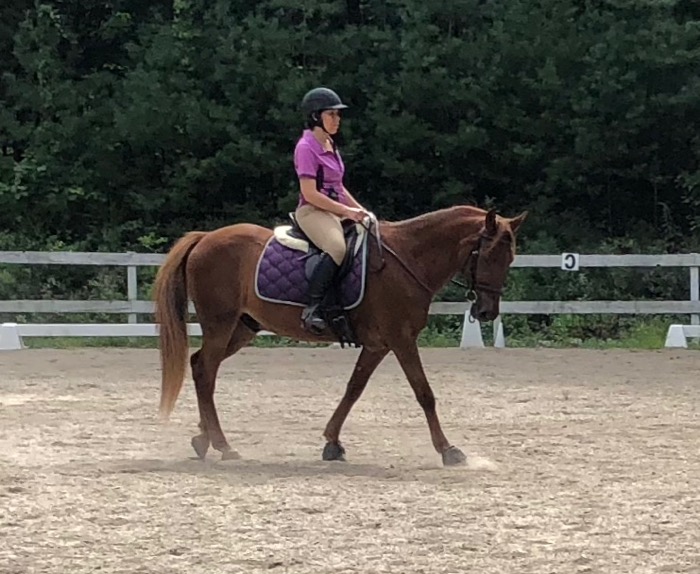 He’s walking. It should be an even four-beat gait, but you can see in this photo how Cider is pulling himself forward from the shoulders while his hind legs are out of sync.

Then his hind legs play catch-up and overstretch. Here is Cider at the trot. You can see how too much weight is on the front right. He tucks his nose and grimaces.

For comparison, here is Tonka trotting. Front and hind diagonal legs should be parallel. You can train your eye by looking at those red lines. Tonka probably won’t be moving like that when he’s 22, (he’s 12 now) but I’ll do my best to keep him balanced.

In previous years, Cider had a brilliant big walk. When we went on trail rides with him, Tonka was always left in the dust! Trina was used to a quick horse under her, and although Cider kept the speed, he lost the balance. As riders, we’re told to drive the horse to go forward from the hindquarters, which Trina continued to do, but that only made things worse. Trina didn’t know what the new normal should feel like, or how to ask for it.

That’s where I came in. I needed to guide them to a new balance point.

Cider has a natural motor, which is a wonderful thing in a horse, and not something I wanted to turn off, but he did need to shift his center of gravity, and to do this he had to slow down. I had Trina bring him into a lower gear, but not with her hands – pulling back would have sent him off-kilter. We got Cider to slow down with a subtle shift of weight by Trina’s seat (so that it feels as if she’s melding into the saddle,) more open hip joints, and a flatter and more relaxed calf. Hands were adjusted so that the rein aid could be given by a subtle closing of the fingers.

This didn’t shut down Cider’s engine. Instead, I could see him try to sort out how to move to please Trina. Here he lifts up his forehand a little, but he’s still over-reaching behind. 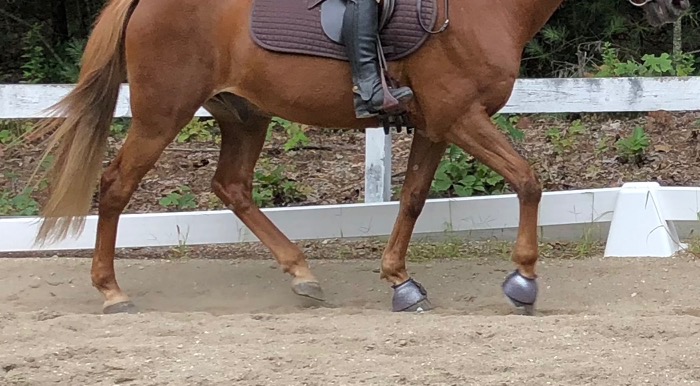 I helped him out by setting up poles on the ground for him to walk through. It’s important that the horse feels that they are figuring it out along with their rider, and not forced into it, so that they buy into the work. The poles gave him obvious guidelines and a set tempo.

He got it! Here is Cider’s new walk. 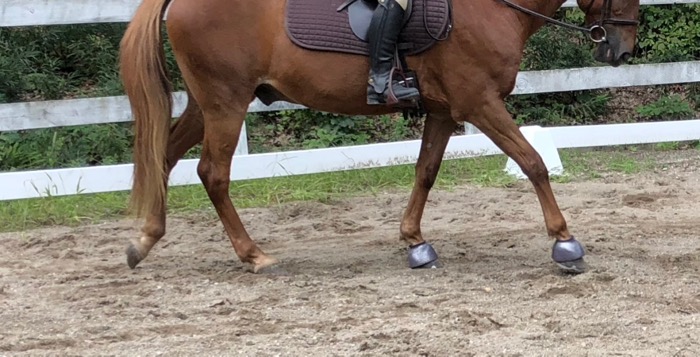 I’ll continue to help Trina refine her position and how she communicates with Cider, so that this change becomes their default.

This will help to keep Cider sounder and both of them happier well into his senior years. 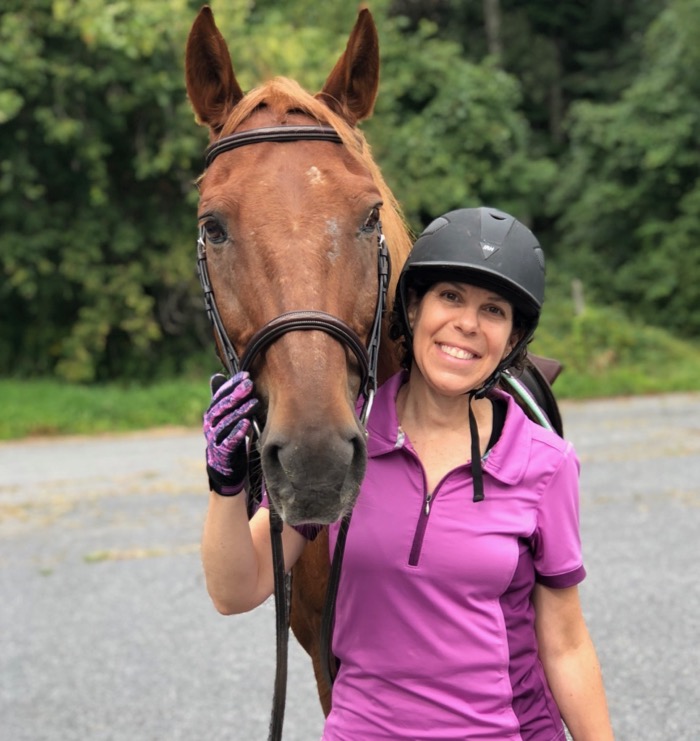 Some of this work is selfish on my part – Tonka and I want to keep our trail buddies around for years to come. 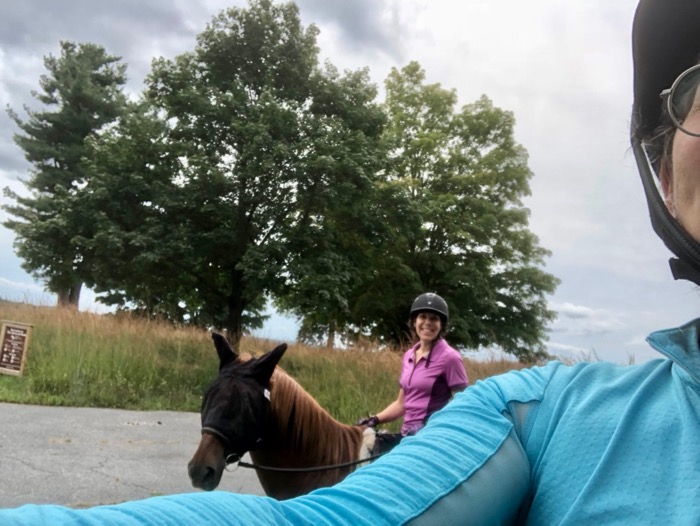 (If anyone knows how to take group photos from the saddle, let me know!)

I am accepting new clients – if you’d like lessons, email me!