There’s an expression in riding that you “throw your heart over the fence and your horse will follow.” The idea is that if you have courage and are committed to a path, that your horse will bravely carry you there.

Still, there is a lot of truth to that old adage.

Many years ago I went to riding school in England. In the afternoons we had jumping schools. I’d been riding a rather fat and unenthusiastic pony, but on this day, I was told to get on a big chestnut. “The best jumper in the barn!” I heard Jerry, my instructor say. We were jumping grids – without stirrups or reins. (Stirrups were crossed over the front of the saddle and reins were tied into a knot.)  We bounced over a line of jumps with our hands on our waists, and with nothing to hold us on but balance.

It was thrilling. Jerry kept raising the jumps. At some point we got back our stirrups and reins. As the rails went up, some riders were told to stop. Either they or their horses weren’t ready for the size of the obstacles. But I was told to keep going on that big chestnut. We were sailing over jumps that were higher than I’d ever done.

What? (I didn’t know it at the time, but I had a mild hearing loss, and so I sometimes misheard things. Your brain fills in the gaps with what makes sense.) It dawned on me that I was not on the best jumper in the barn, but rather on one I’d heard about, who was notorious for putting the brakes on. Which is what that big gelding did at the next jump. And the one after that. As soon as I lost heart, so did he. Although I was still pointing the chestnut at the jumps, I’d lost faith in the horse, and in my ability. I was using what looked like the same aids, but they weren’t. Your horse can feel what you are thinking.

The other saying that you often hear is: “your horse has to be more afraid of you than the thing he’s spooking at.”  This adage I don’t buy into at all. You can whip your horse over a jump, but that doesn’t lead to courage. Just the opposite. Your horse will be wary of both you and what frightens him. The horse is forced to choose the lesser evil. Is that how you want your horse to see you?

I want us to both have heart.

Horse and rider get courage together through experiences that are challenging but achievable. Keep moving, step by step, out of your comfort zone. If you’re faced with something scary, it’s okay to get off and walk your horse (they have more confidence when you’re at your side than on your back, more about that in this blog.) But once you can walk together, try again from the saddle.  Keep your horse channeled between your legs and your hands. Look where you’re going. Exude confidence. When the horse takes a step, relax and trust that they’ll keep on. They’ll likely hesitate again. Have a conversation with your horse using your seat, legs, breath and focus. Ease up if you feel fear bubbling underneath you, but when the horse tentatively says, maybe now? send your heart on ahead.

I always have peppermints in my pocket – a tangible reward for a job well done will set you up for future success. But treats are not the only way to reinforce your horse for tackling challenges. (And treats don’t always improve the outcome. Too many, at the wrong time, will distract from the goal. A discussion for another day!) If you are clear about the obstacle at hand, and make it equally clear when it’s been successfully completed, both you and your horse can share in that sense of accomplishment. Perhaps I’m anthropomorphizing, but I swear that I can see that look of pride in a horse that knows that he’s done a good job on a demanding task. This isn’t just for riding out on the trail. I see the same soft and confident look after successful dressage schooling sessions.

The barn where I board Tonka has a short trail loop through the back woods. It gives us a pleasant fifteen minute walk, but we’re back at the barn before we really get into gear. I’d noticed a trail that went off the other way, but was blocked by downed trees. Last week, Steve and I went exploring and discovered that the trail continued on to a marked, rideable path! So we got out a chain saw and loppers. 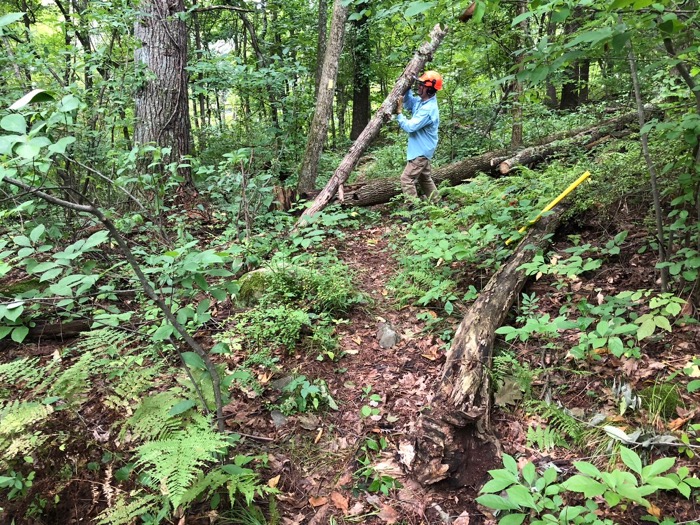 Steve moved the big stuff, and I tamed this jungle. Just beyond this tangle of vines and brush was a wooden bridge over a small stream. The bridge was still sturdy, and wide enough for horses. 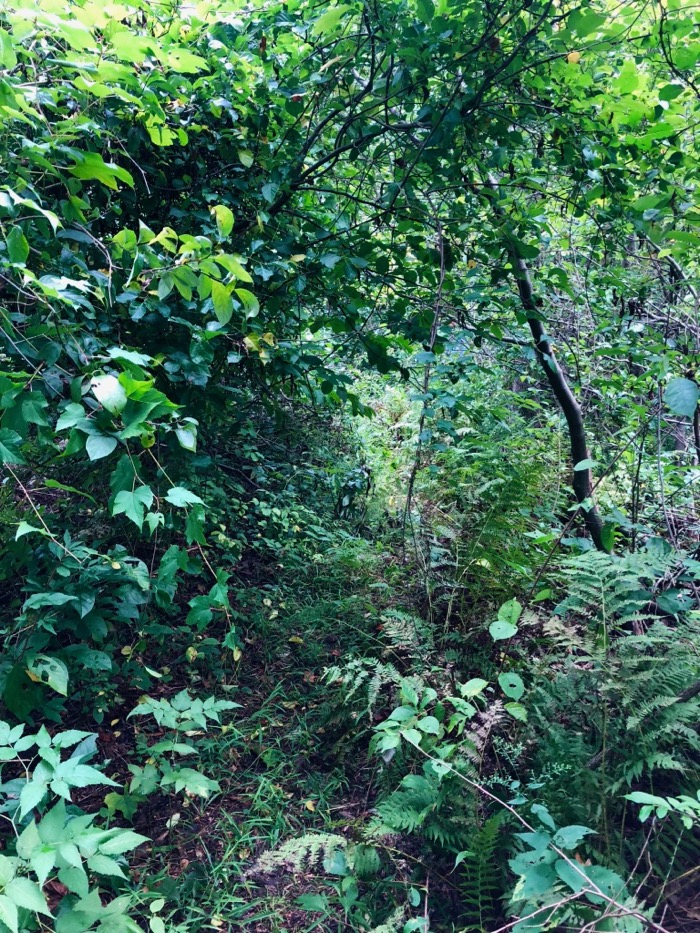 I tacked Tonka up and told him that we had some exploring to do.

First, we had to get over that bridge. The sightlines weren’t the best for a horse – the brush, despite my branch whacking, was still a tad closed in. There was shadow and light into what looked like a wall of green. 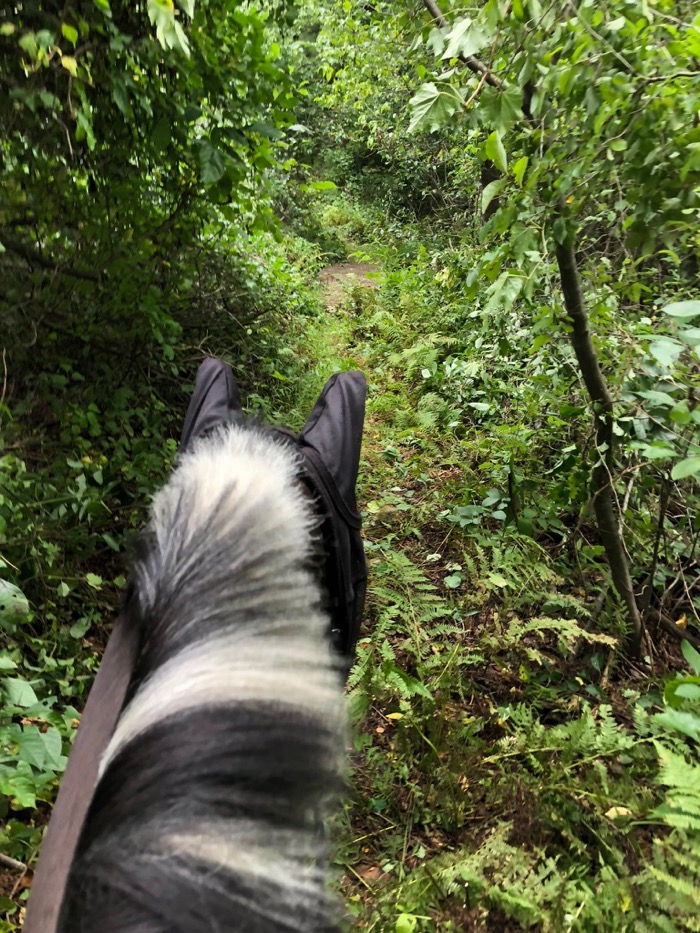 Tonka had no way of knowing if the bridge’s wooden surface was slippery or dry, firm or rotted, or what lay in wait under it. He didn’t know where it led.

What he did know was that my heart was already over it, and so he followed.

He snorted every breath across. His muscles were tight. But he did it. 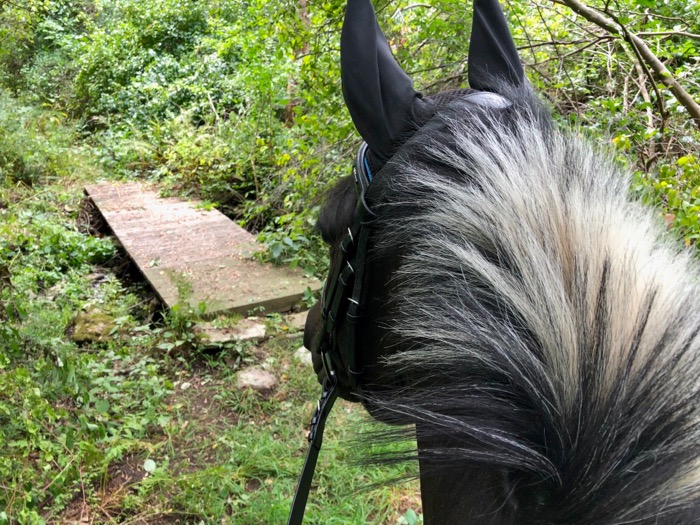 On the other side I told him that he was brilliant, gave him a peppermint, and said, let’s go see what we can see.

Which we did. With enthusiasm and courage.