For Tonka, 2017 was year of symptoms but no definitive diagnosis. It started with a slight head shaking. Then his back hurt. Then Tonka felt great and we had some rides where he did brilliant first level work. Then he couldn’t bend his neck. Then his back was sore again. Then his hocks were ouchy. We debated whether his hooves were the source of pain. Then Tonka felt better and was high point open champion at a competitive dressage show. Then he couldn’t/wouldn’t move.

The veterinarian came. Multiple times. We went for diagnostics and treatment at Tuft’s Large Animal Hospital. We tested for Lyme disease (negative, although there are tick-borne ailments that don’t show up in the blood work.) We found bursitis in his poll and damaged neck vertebrae. (I knew that slight ear twitch had a physical source! The culprit was a too-high hay net.) An arthritic hock was injected. His thin-soled hooves were protected by pads. I changed saddles.

If you have a horse, you have, or likely will, face a similar year. A friend at the barn spent $7,000 having veterinarians check over her horse, and has yet to have a definitive diagnosis for why her mare isn’t moving happily. I sympathize. There are times when the cause isn’t clear. It’s true with humans, too. I’ve had issues with my hands, and have had every possible diagnostic test done, and yet the doctors still have no idea why I have the symptoms that I do.

Sometimes – often – the inability of your horse to move comfortably is brought on because we are unbalanced, overly-demanding, and ungenerous riders. Or what we make our horses do compounds the underlying medical issue. I question what I’m asking of Tonka all of the time. Now that I’m back in the (new) saddle, those questions loom large.

Tonka has been cleared to get back into shape under saddle, and getting fit and flexible isn’t necessarily ache-free. I know this. I’m tight. I’m sore. I have back pain and a damaged shoulder. I need to build strength. Every morning I pick a yoga or pilates video on YouTube to follow. Every morning I grunt and curse at my computer as I exercise. I know when to ease up so as not to cause more harm. My job on Tonka is to push, but not to the point where it causes him harm. It’s hard to know when this is.

I’m happy to report that Tonka immediately approved of the new saddle (for those who care about such things, it’s an Adam Ellis Brio.) When the saddle didn’t fit, Tonka wouldn’t let me get on. Now he does, and looks perfectly content to do so. 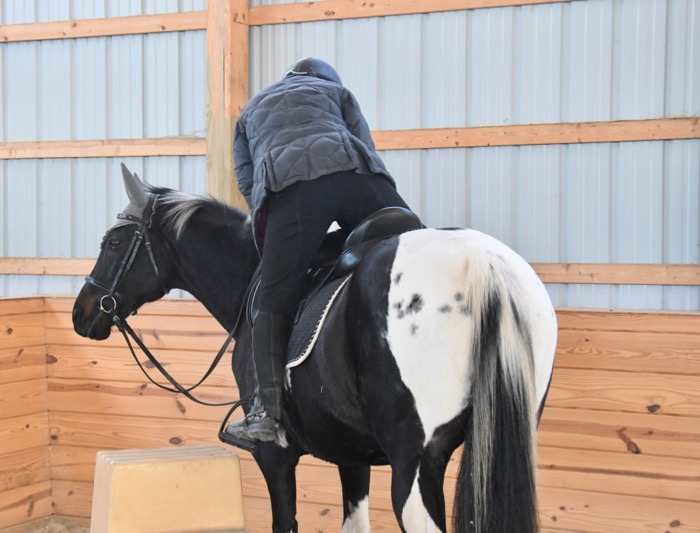 But for first couple of weeks with the new saddle, when Tonka moved off, he went hollow and stiff. 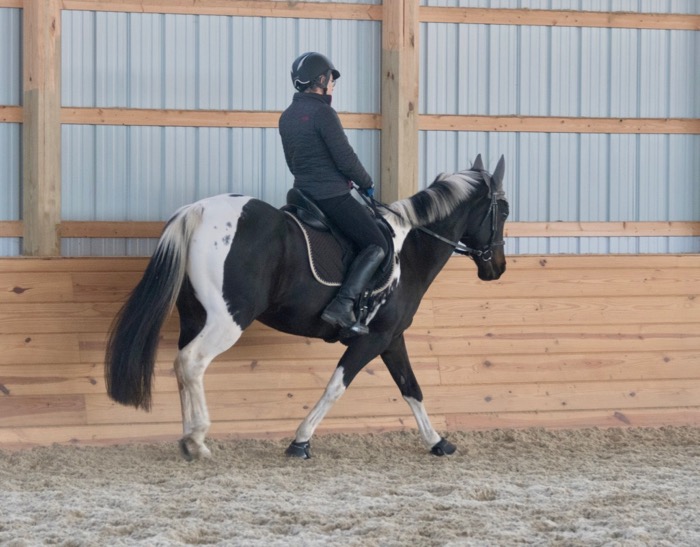 So, I used my legs and seat to tell him that, yes, he had to get moving. Tonka really didn’t want to go, and let me know by balking. I insisted, and it wasn’t pretty. Tonka was behaving just like me those first five minutes of doing yoga. But, to be sure that I wasn’t missing anything serious, I called in yet another expert – a veterinarian who specializes in chiropractic work. She watched me ride Tonka. Then she worked on him for an hour. 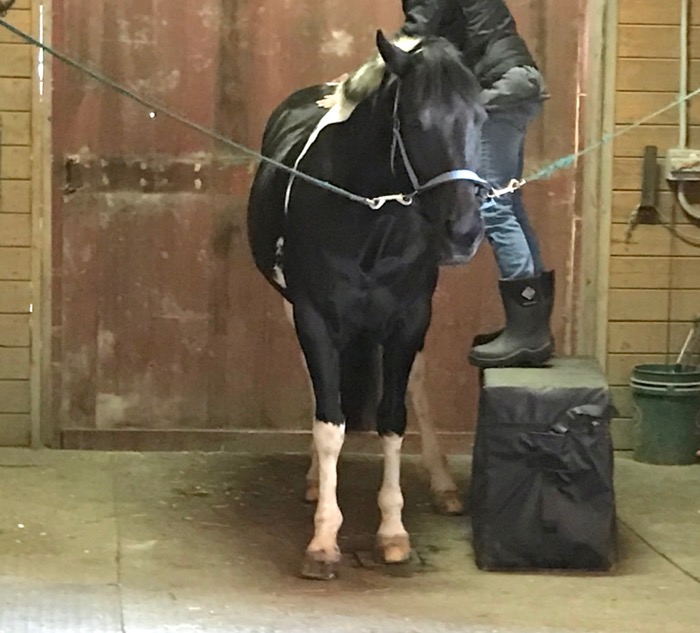 Tonka and I both said that this was very interesting! 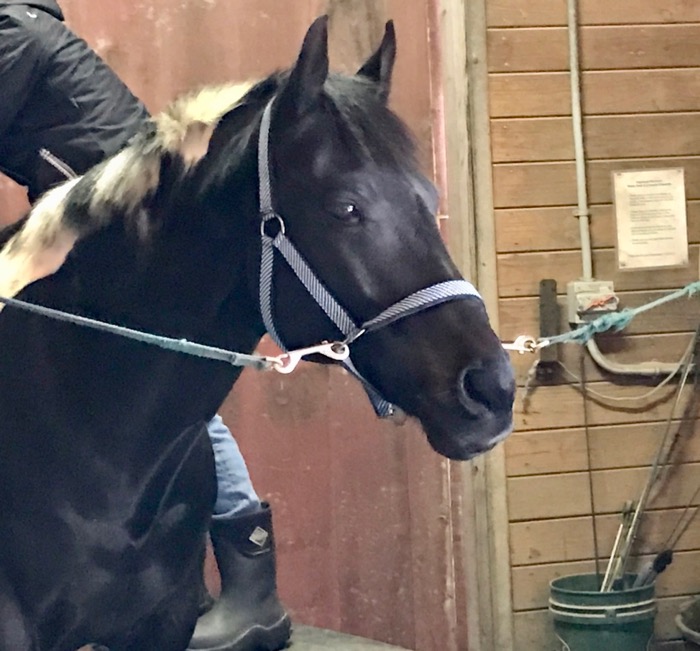 She identified tight shoulders (we both have them!) and other sore areas. She agreed that under saddle Tonka started out lame on the left front (5 strides) and off in the right hind, but that he worked out of it. She declared Tonka sound.

She said that what Tonka needs is to do stretches, and as soon as the weather allows, hill work and trail riding. I already was doing neck stretches with him, we’ve added shoulder extensions to that.

Despite his initial recalcitrance and stiffness, we need to keep moving under saddle. Get fit. Balanced. Work out of that uneven way of moving that he got into the habit of going when ouchy. That means that there are times when I’m going to have to require that he go. It can take a strong squeeze with my leg. Sometimes even a quick thwack. This is aversive; I do it as little as possible, and stop as soon as I get a response. Once Tonka gets motoring along, I can feel him say, Oh, right, it feels better to move like this and he settles into a forward rhythm. One of these days, I hope to feel the same pleasure in the yoga pose downward facing dog, as Tonka does in doing a lofty trot! In the meanwhile, we both need to be pushed to get to that place. 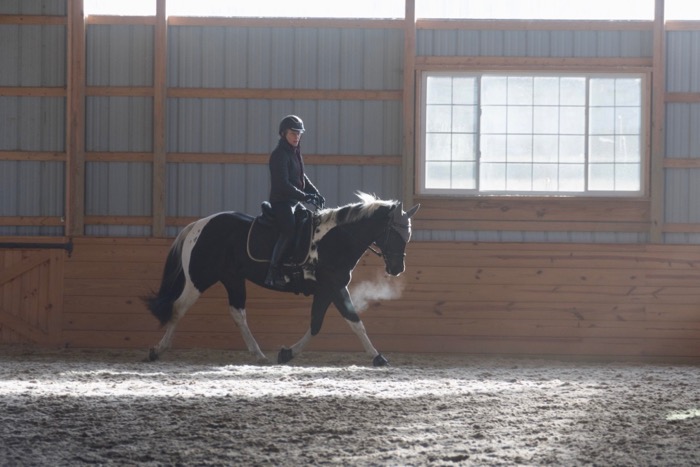 A couple of times during our workout, when Tonka is floating along, I mark the moment (I say Dee!) and he gets a sugar cube. This makes it very clear to him what the goal is. It also keeps me focused on the positive. Because I’m looking for that beautiful stride, I notice it on its first beat and we can relax into it, which is rewarding for both of us.

Although our rides don’t start pretty, we do get to a sound, forward-thinking place, so I know we’re on the right track. I’ll keep listening to my horse. If he refuses to let me on, if he shows anger when entering the arena, if he doesn’t loosen up after a warm-up walk, then I’ll get the medical experts back in.

For now, though, it feels really good to be doing this: 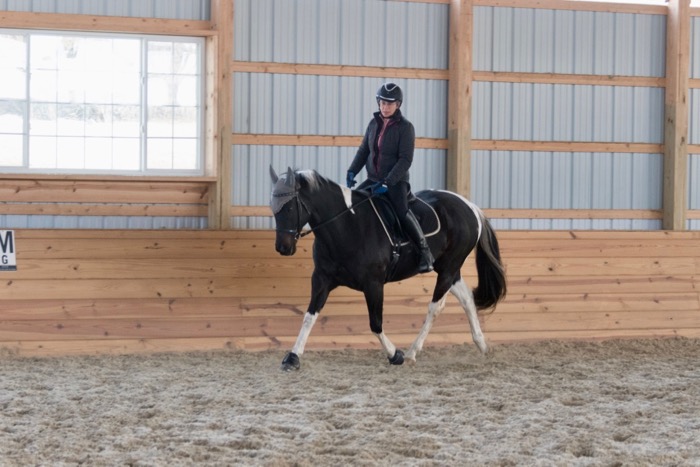 I think that the exercise Tonka is now able to get under saddle is making him happier overall. It’s been a boring winter, standing in his paddock hemmed in by dangerous ice. But recently, I’ve noticed this self-satisfied face. See that hanging lower lip? That’s a relaxed and content horse. 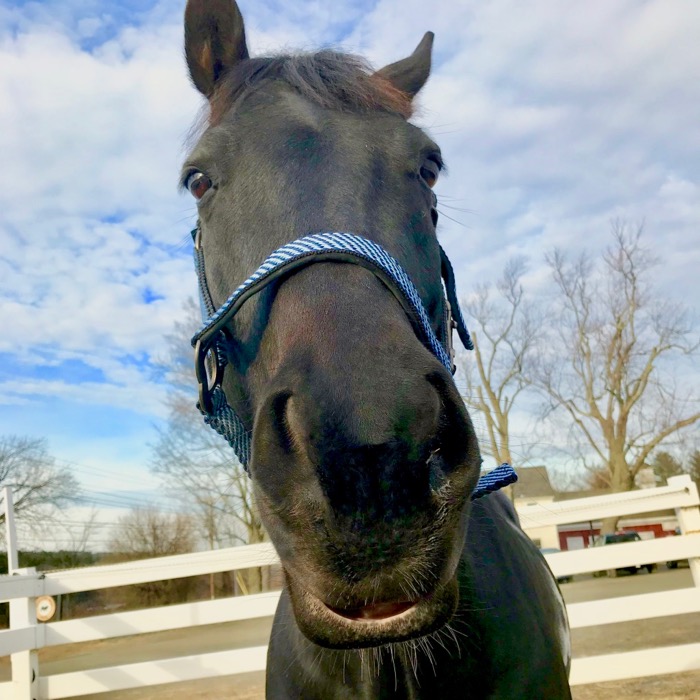 7 thoughts on “Getting Moving”