Last January, Tonka started to twitch his head, but only when ridden, and only in a specific posture. I called on my veterinarian. Whatever it was that was bothering him seemed to be a small issue. Tonka was otherwise sound. We checked his bridle and saddle fit, which were fine. Symptoms worsened. His back and neck became sore. We tried muscle relaxers. Symptoms continued to worsen. By March, Tonka wasn’t able to trot under saddle. X-rays were taken. He had damage in two of his neck vertebrae. The best guess was that he’d slipped on ice in his paddock and had injured himself, and that the pain of it worsened over time. Injections into his neck joints seemed to fix everything.

There were times when my good, willing horse, didn’t seem to have any try in him. His canter was especially stiff and he resisted suppling exercises. Then, two months ago, Tonka refused to move. He looked sound – he moved evenly on all four legs – but something was very wrong. At the same time, I broke my foot. We both took 6 weeks off. The rest did my foot good, and it’s almost healed, but nothing changed for Tonka.

I noticed that he stood wide, and there were tight, hard, oblong muscles along the top of his haunches. He was overcompensating for something. 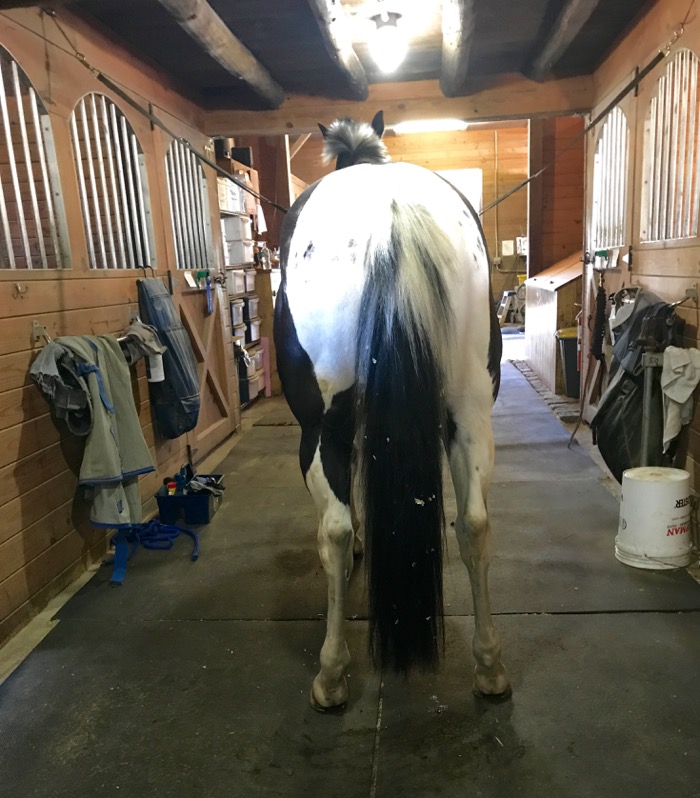 Horses are big and complicated. Sometimes you have to look inside of them. Luckily for us, Tufts University has a Large Animal Hospital associated with their veterinary school. It’s state-of-the-art. Tonka went in for scintigraphy, which would enable us to see any inflammation in his skeleton.

Tonka, of course, wowed the staff with his amenable behavior (more on that in another post!) Here he is, going to the stabling facility. 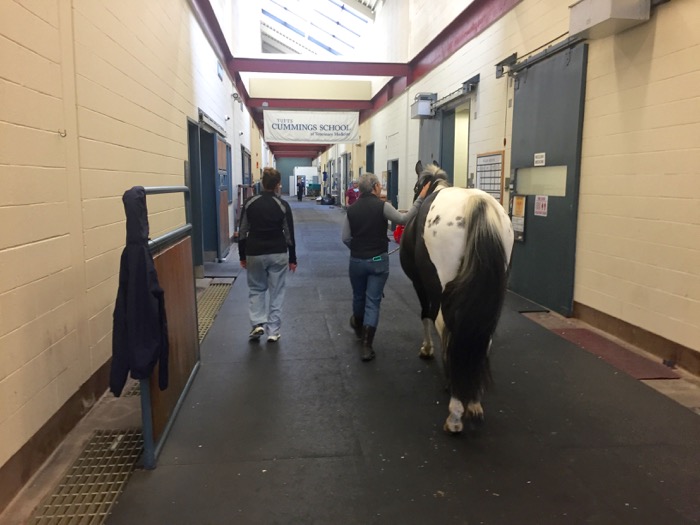 There was a large stall, with unlimited hay. He liked it! 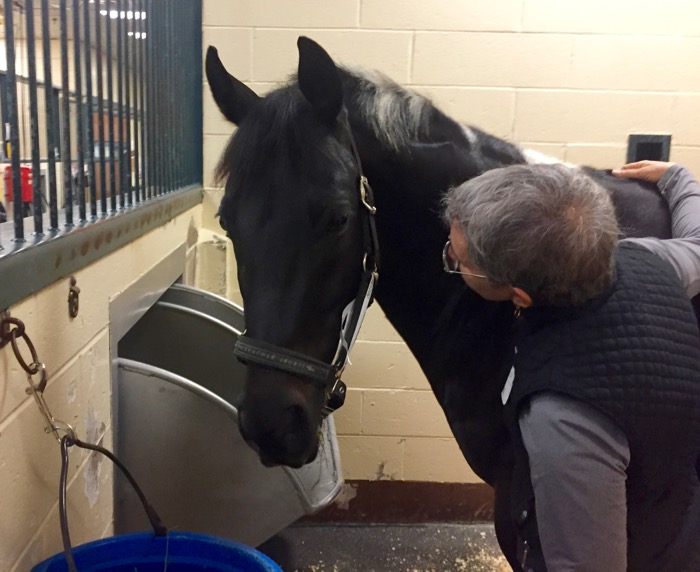 The scintigraphy made him radioactive for a day, so he had to stay two nights. 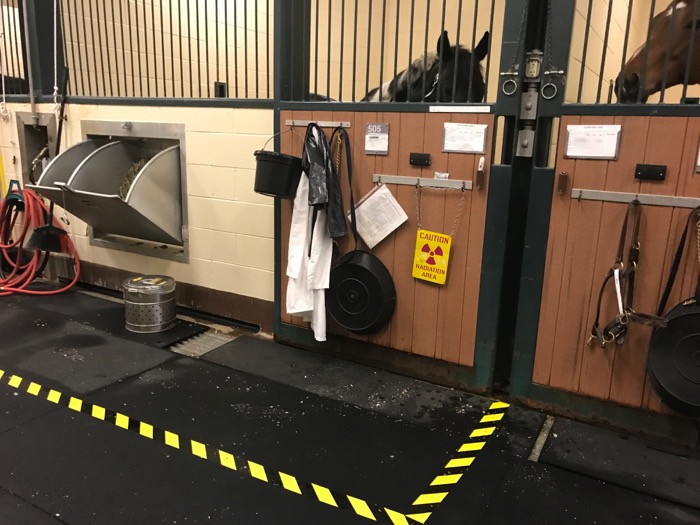 The scintigraphy gave us a diagnosis: Tonka’s sacroiliac joints were inflamed. This might have happened when his neck was injured. It might have happened when he had to overwork his rear end to protect the pain in the neck. Whatever, once the joints become inflamed, they can’t fix themselves on their own, or with rest. Tonka’s wide stance and overworked muscles confirm this diagnosis. Dr. Bubeck then did ultrasound to see if any associated ligaments were also damaged. The very good news to that was that they are fine. I believe that trusting what Tonka told me – that he had a good reason for me not to get on – kept the injury to affecting only the joints and not the soft tissue. This makes recovery much easier!

Tonka’s sacroiliac joints were injected with a cocktail of medications, and Dr. Bubeck believes that he’ll be back to normal in three weeks. Also, it shouldn’t recur. That’s very good news.

I was also thrilled to hear that I could get back on and slowly bring Tonka back into work. So, on Tuesday, I swung into the saddle. My good horse hasn’t been ridden in almost two months, and yet he calmly stood at the mounting block and stepped off when I asked. Tonka and I walked for a half-hour around the flat indoor. 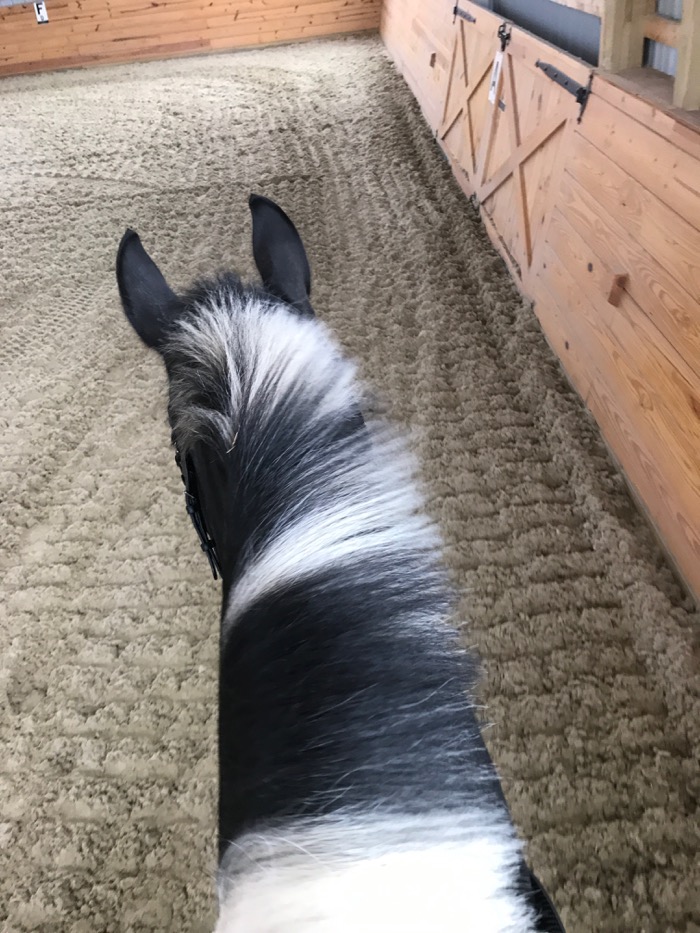 The next day we went a mile.

Yesterday, I rode a mile around the indoor and then we went outside! We walked for another half-mile, around the paddocks and the outdoor ring. Next week we can trot.

Look at how content my horse is now that we’re back in the saddle.

I feel the same way. 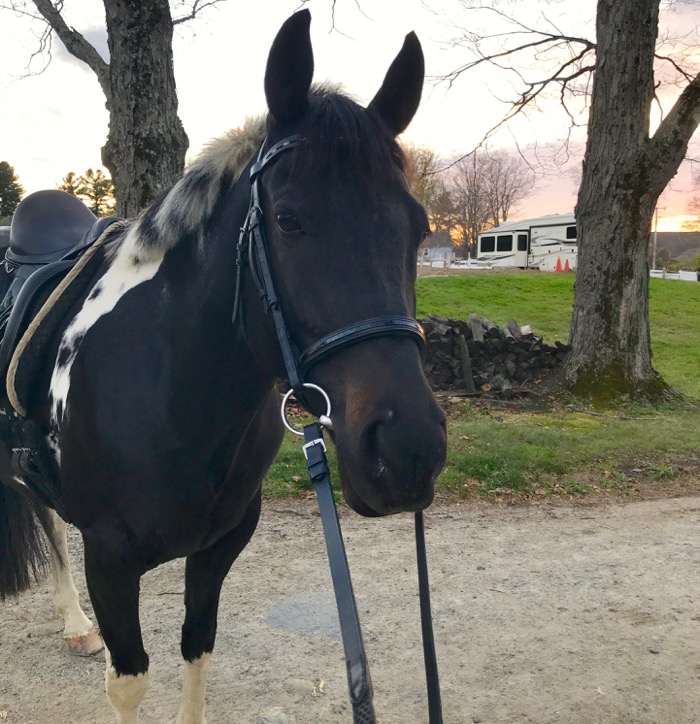 18 thoughts on “The Culprit is the Sacroiliac Joint”