For the last month I’ve had a cast on my left foot. My dog nurse thinks that I should be on the couch with him for the duration. 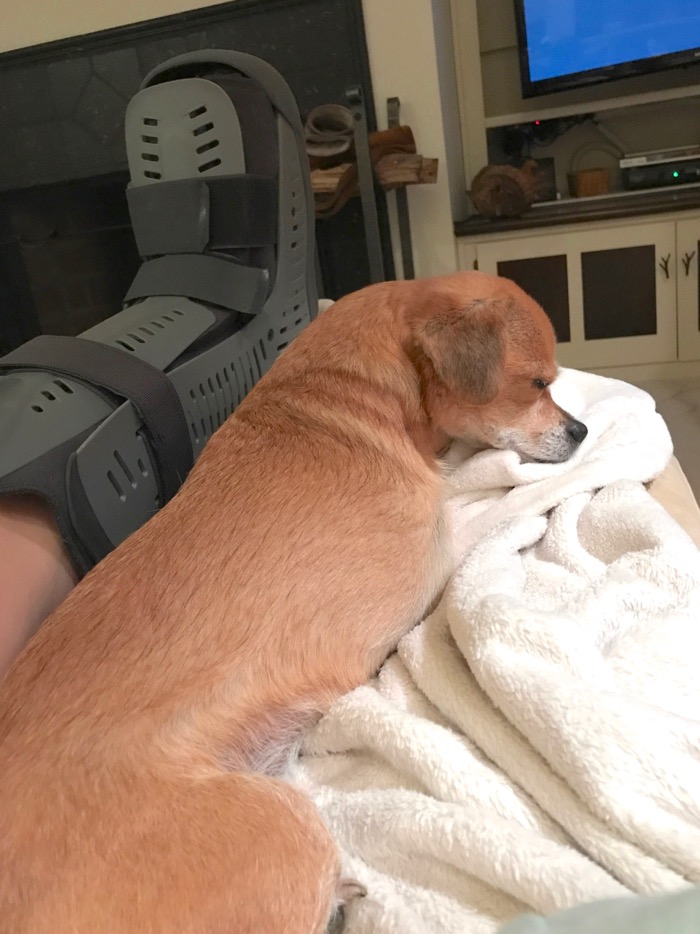 But I’ve never been a good patient, and much to Scooter’s disappointment, I got a plastic protector for the cast, meant for use in the shower, put duct tape on the bottom, and have been going to the stable daily. 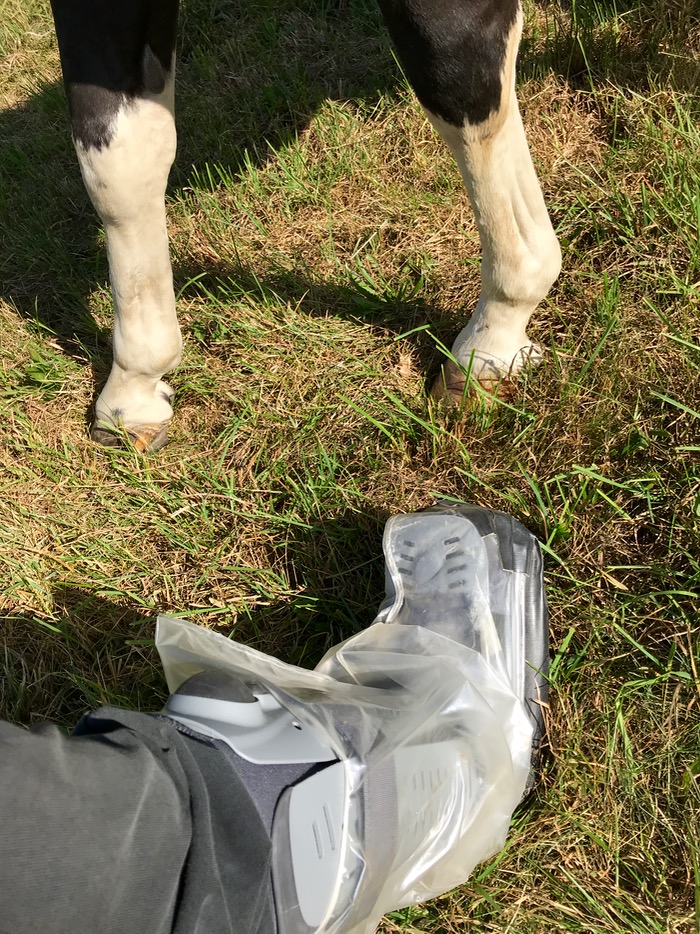 I can’t ride, but Tonka and I have things to do.

Right before I was injured, I’d videoed Tonka’s behavior when I tried to lunge him. The sort of training that I do gives the horse a voice. When they’re uncomfortable or upset, they know that they can tell me and I’ll listen. But, in the case of the lunging, I didn’t know what Tonka was saying. The video helped me to pinpoint the moment that he went from cooperative to angry. 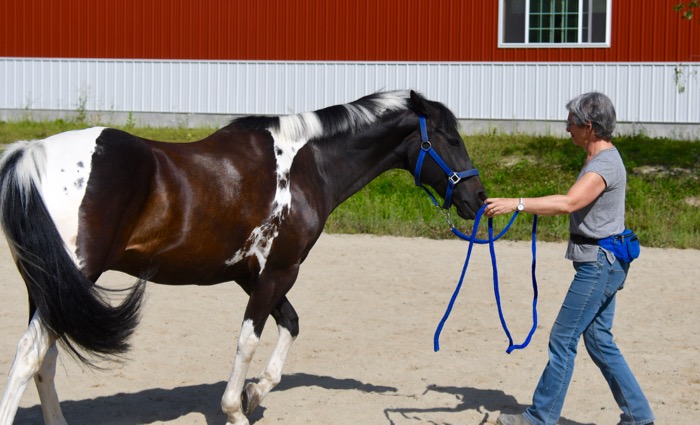 In the above photo you can see Tonka reacting to a slight change of my body position as I ask him to move forward and out. I wondered whether he’d react the same way outside of the ring. He did. Tonka went from grazing contentedly to this. I’m not sure why he feels this way about lunging (I have my theories) but what mattered now was that I knew how to go forward. 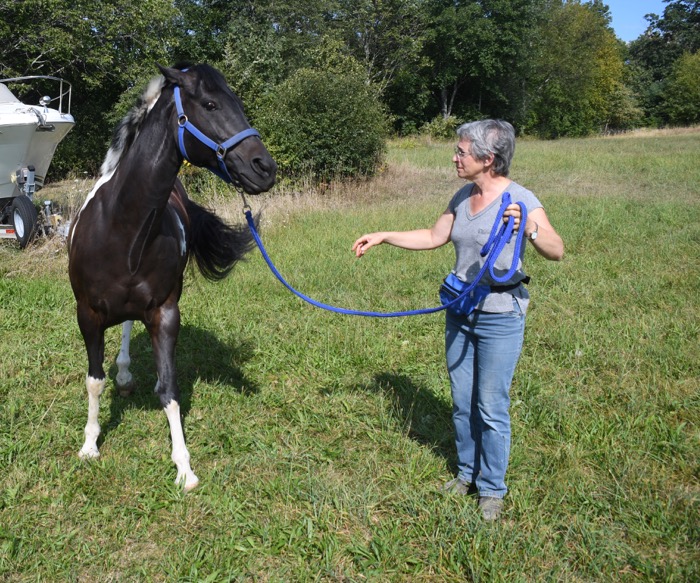 Now that I had identified the body position that he objected to, I could desensitize him to it. Gallumping along in my boot, I walked him slowly around in a circle. I knew from the video that he reacted when I faced him, so I started out with my shoulders pointing the direction we were going, then I turned my shoulders towards him, then forward again. When he made snarky faces at me, I scratched his neck and calmed him down. I’m now able to have him walk 8 feet away from me, almost as if he’s on a lunging circle. I can also swap the lead line from one hand to another (something that had also set him off.) 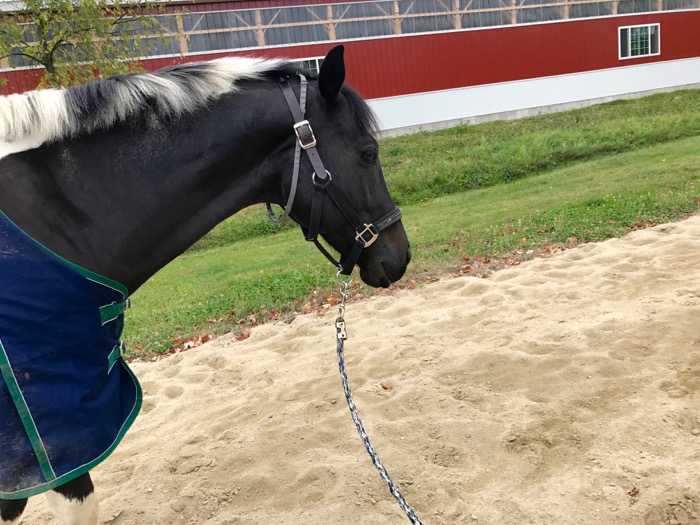 One thing that I noticed was that Tonka was tenser going to the left than the right, so I’ve been grazing him on his left, while standing in lunging position. 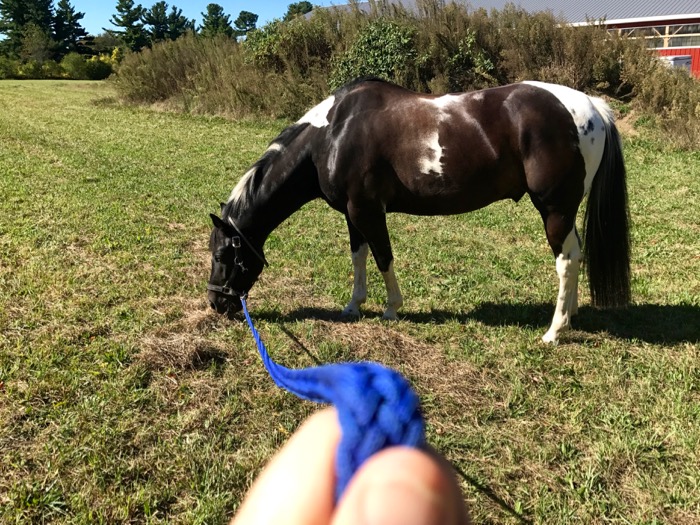 None of this is a quick fix, but we’re making a lot of progress.

The other thing that Tonka has always been angry about is the whip. Point a lunge whip at him, and he’ll rear up and go for you. Carry a whip when riding, and he tenses, sinks his back, and loses all of his sparkle. I’ve never once hit him with a whip. In fact I don’t use the whip at all. When I first got him, I attempted to carry it while lunging or riding, and his dramatic reaction caused me to stop. I’ve not worried about this bit of attitude as the whip wasn’t in my training tool kit. However, we’re at a point where I’d like to fine tune my cues. It’d be very helpful to be able to place a whip on Tonka as a request to move a certain body part, for example, to engage the inside hind leg during a shoulder-in. I’d like to teach him that a touch means to move over, and that a tap means to go more energetically (there’s only so much that my legs can communicate.) I figured that while I’m laid up is a good opportunity to get Tonka to feel neutral about the whip (which is the first step in converting it to a meaningful cue.)

At first I simply held the whip near Tonka and fed him carrots. Then, for two weeks, during twice daily sessions, I touched him with a whip. At first Tonka was worried, and then he ignored it.

At this point, I didn’t use food. I didn’t want the whip to predict anything. Nothing good. Nothing bad. Just neutral. 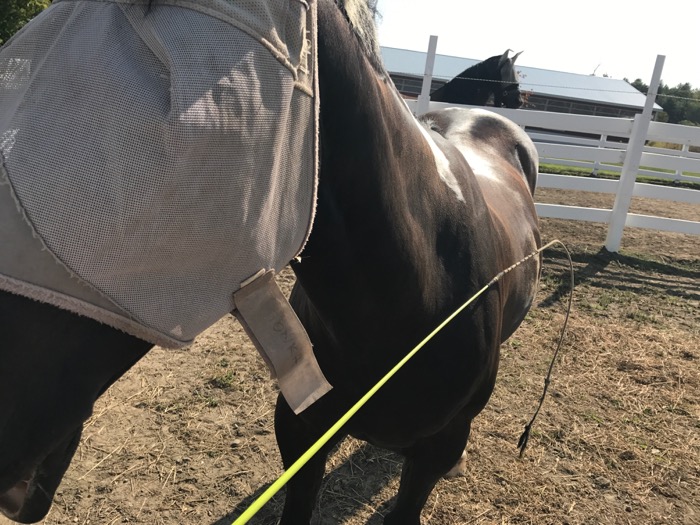 Next, I carried a whip out to the field. I used it to brush flies off of of Tonka. Now, the whip’s motion was a good thing – the whip hassled those pesky bugs, not him. 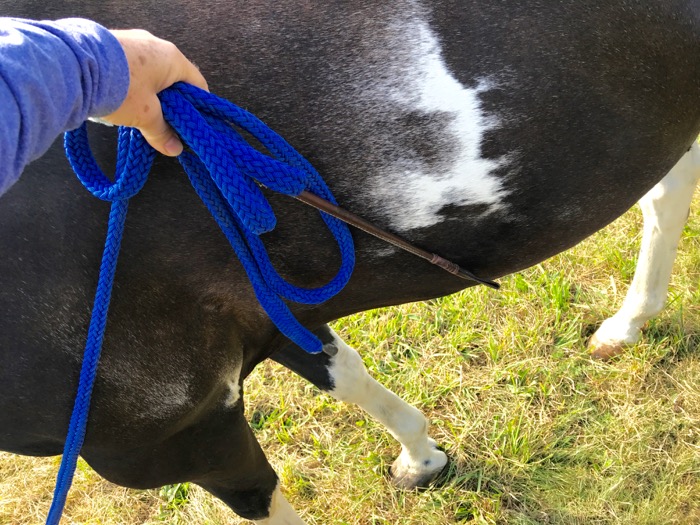 Tonkas’s reaction to lunging and whips was a long time in the making, and there’s no fast solution. I’d put off dealing with it because I could work around his issues. The broken foot has given me the time to deal with it. We’ve made a lot of progress. Hopefully once this cast comes off (soon, I hope!) I’ll stay motivated and continue this work from the ground. It’s been fascinating to see how dramatically Tonka reacts to very specific body language, and what it takes for me to change his perception of what I’m about to do with him.

How Tonka has reacted in the past has been valid, I’m sure. I’d rather that he let me know that something is wrong than to suppress it and let it out in an even more scary way, or to shut down. It’s not about me quashing the behavior (which is dangerous – and does need to be stopped) but rather it’s about listening to his concerns, reassuring him that his fears are no longer justified, and giving him alternative things to do that keep us both safe and satisfied. 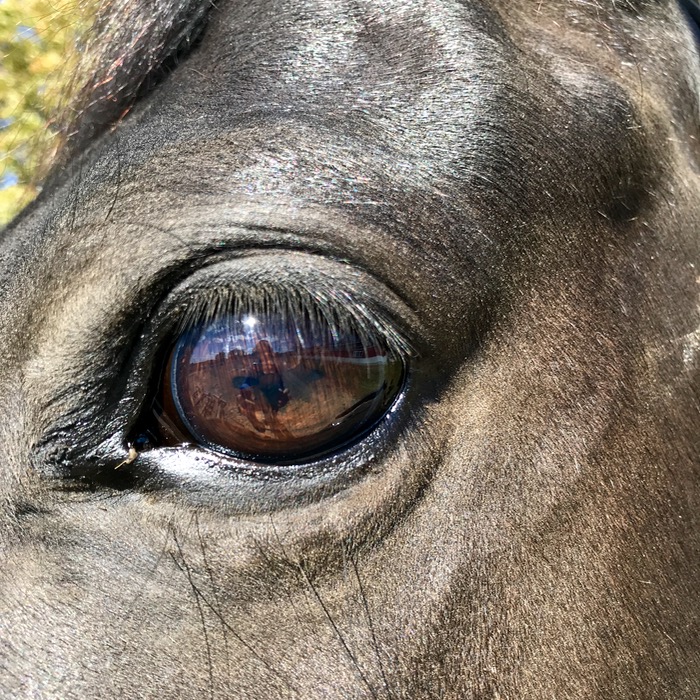 ADDITIONAL WORD OF CAUTION: Lunging a horse, even when the horse doesn’t have Tonka’s issues, can be dangerous. Never lunge on a short rope. There’s a reason that lunge lines are 20-feet long. Some horses kick and  buck, blowing off steam. A short rope puts you within range of severe injury. You need to be a full rope’s distance from them. The whip is not used to hit the horse, rather it’s a physical pointer to keep them out on the circle. A horse properly trained to lunge will move out from a whip pointed at them. A sensible horse won’t want to run into the end that might poke them, but in an emergency, you can use the whip to keep the horse from trampling you. I’d rather not have that emergency, hence the training that I’m doing with Tonka. That said, I’m well-aware that I am in a danger zone. I only work at a walk, and only when he is calm. This post is not a complete how-to, and each horse is different. So, please be careful!

6 thoughts on “Working While Laid Up”