We’ve all heard Horses are prey animals. It’s followed up by the statement: We’re predators. This is then used to justify certain training techniques.

It’s claimed that since horses are naturally afraid of us, that we have to train them differently than we do, say our dogs.

Because of the uniqueness of each species and because of how we live with them, we do interact with these animals in different ways. I don’t ride my dog. My horse doesn’t sit under my desk as I write this. Horses don’t enjoy chasing tossed pieces of kibble. Horses do want to peacefully chew on forage for three-quarters of the day.

There are similarities. When frightened, both dogs and horses run from a threat. Dogs with tails between their legs, horses with tails streaming behind them. When cornered, both animals bite. Horses, though, also have the ability to rear up and strike.

The cornerstone of much of the work that I see being done in round pens and in “desensitizing” (chasing with sticks and bags, throwing tarps on a horse, tying them up so that they can’t move) is based on this theory that horses see humans as predators, and that that position of dominance should be used to the trainer’s advantage.  Some trainers even use body language that imitates a carnivore stalking dinner. When a horse sees that, they’re  justifiably afraid. Eventually, most horses give in – although some don’t. I have clients with horses who became aggressive because of such treatment. Remember, when cornered, a horse will bite. Training that is based on fear always has unwanted consequences.

Besides that, I don’t believe that the underlying assumption that horses see us as predators is true.

Horses are perfectly capable of distinguishing between an animal that is going to eat them and a friend – even when that friend is a carnivore. How many of us have dogs in our barns? How many of us laugh at the affectionate relationship that dogs and horses have? And yet when a coyote slips through the fence, all horses go on alert. Barn cats curl up on a favored horse’s back. But those who ride in mountain lion territory know how differently a horse responds to the scent of one of those big felines.

Horses learn to identify danger from the elders in their herd and from experience. They’re not born terrified of humans. They’re wary of anything new, which is smart. But if all of their interactions with people are good ones, they’ll trust us. They do not see us as predators. Not unless we give them reason to.

What horses do have is an innate need for friendship and cooperation within their herd. They’ll include you in their group if you’re a calm, consistent, and predictable presence. Use that body language from the first interaction and even a horse that has had bad experiences with humans will respond like this. 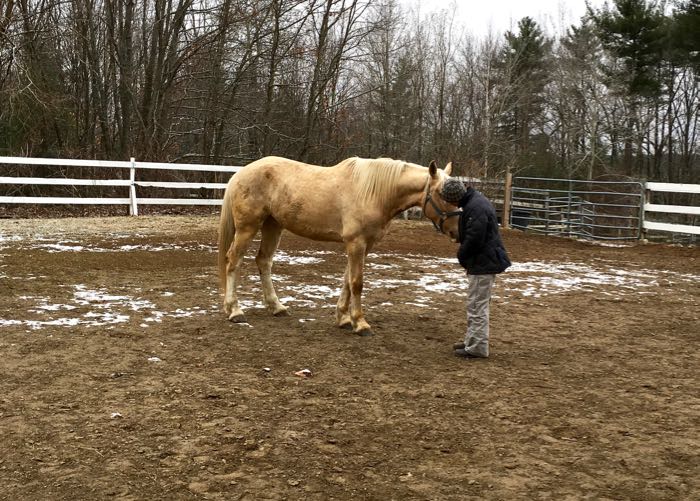 This is my first meeting with this horse who has been through a lot. He certainly wasn’t thinking about the predator/prey dynamic.

This isn’t just true with humans and horses. There are many examples of prey animals that are friends with predator species. There’s my entire flock of backyard hens, who see me as the source of all good things, not as a someone who wants to eat them. I just came across this video of a rhino (they’re big, but they’re herbivores) asking a wildlife photographer for a scratch. Do you  have a story of an interspecies relationship? Tell me in the comments!

17 thoughts on “Horses and the Predator/Prey Mythology”