Tonka is a laid-back guy and he travels well. Some horses kick, fidget and work up a sweat when on the road. Not Tonka. He arrives at the destination looking as if he’s only just stepped onto the trailer. While I get things organized, Tonka, bright-eyed, looks around. 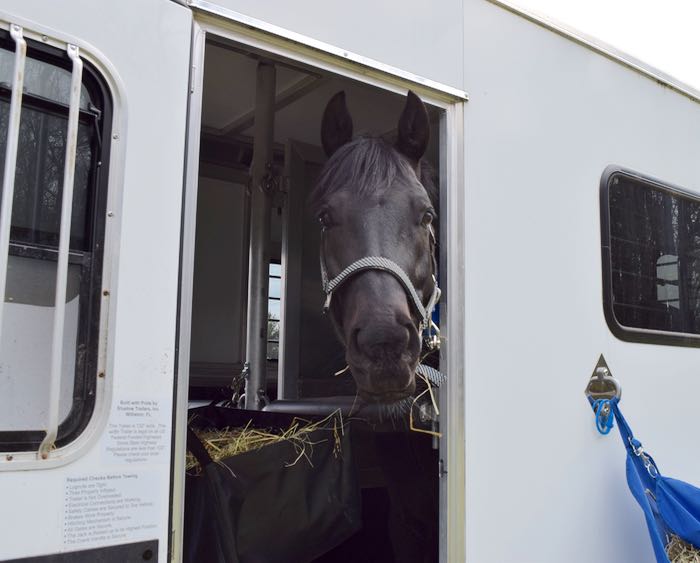 Sometimes he’ll neigh, announcing his presence and asking if there’s anyone there that he knows. No one ever neighs back. That’s usually it for the hollering.

Last year, though, we went to a show with his paddock-mate, Maggie. They’ve been together since the fall of 2014. 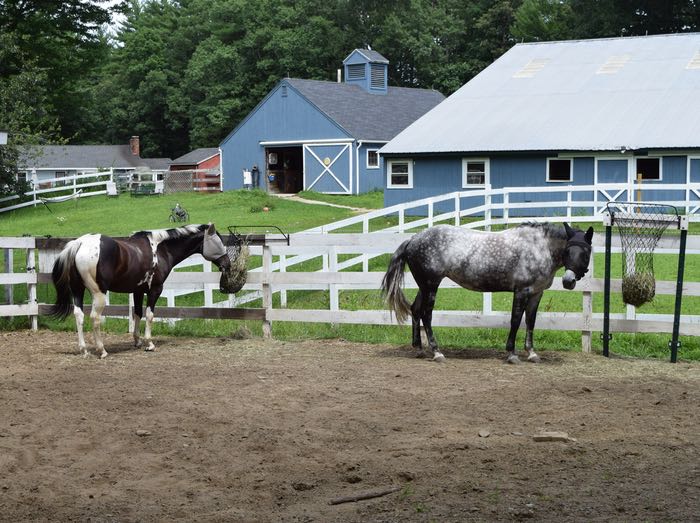 Tonka has no issue leaving Maggie at home to travel to a show solo. But it turned out that if he knew she was on the premises, he wanted her within view at all times. At that show last year, when Tonka and I left the warm-up area to go into the ring, Maggie was out of sight. He neighed several times as we trotted up the center line, and again at the canter, and again as we walked out of the ring. When a horse neighs their whole body tenses and shakes. Not what you want during a dressage test! Since that event, Tonka does get tense when Maggie is out of sight at a show, but he no longer neighs constantly. We also continue to have no issues when traveling alone, which is why I was surprised that Tonka neighed and neighed at our last show. Maggie had stayed home. 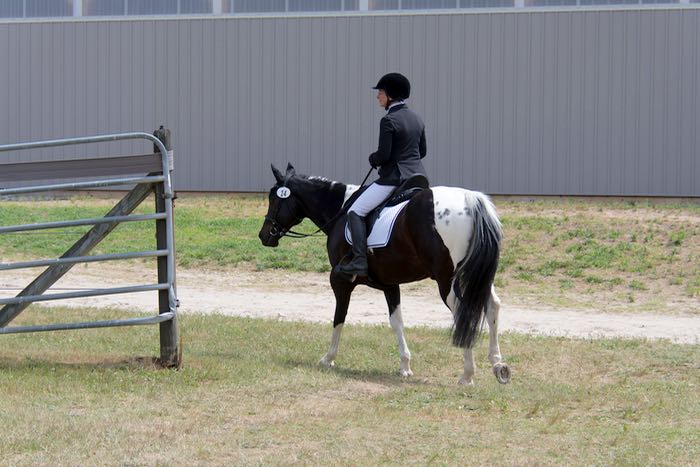 I looked around. What could be setting him off?

Horses see the world differently than us – literally through different eyes. To survive they need the ability to discern movement and patterns at a distance. That they can do far better than us, but the trade-off for that acuity is that what they see isn’t necessarily in focus, nor in the brilliant colors that we know. However, their eyes are designed perfectly for an animal that relies on staying close by their herd mates and keeping a distance from those that want to eat them.

Maggie is a steel gray mare. Her coloring is not that common. Perhaps Maggie is the only horse Tonka has ever known that looks like that. Which is why when he saw this horse at a trailer a few down from where we were parked, he shouted Maggie! 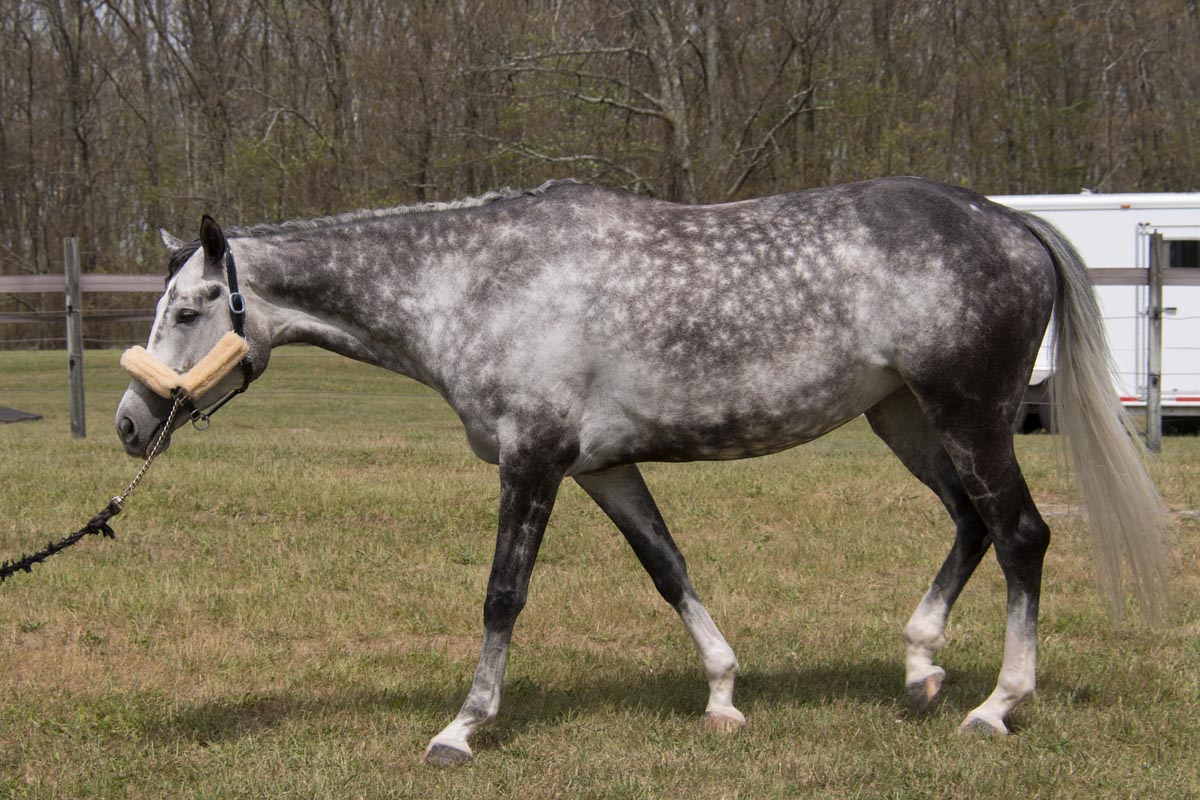 It wasn’t simply the light color. In the warmup arena, Tonka had settled in and was quiet. He ignored this big gray gelding. At least we humans call it gray, but it’s not at all patterned with dark dapples like Maggie. 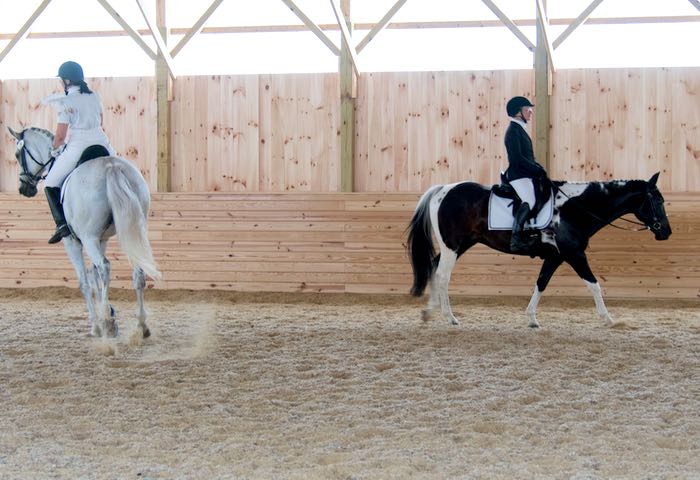 Then that gorgeous mare entered the ring. Tonka looked up. He hollered. She didn’t even look his way.

Tonka knows not to trust his eyes. He used his nose. I could feel him take a deep inhale breath. 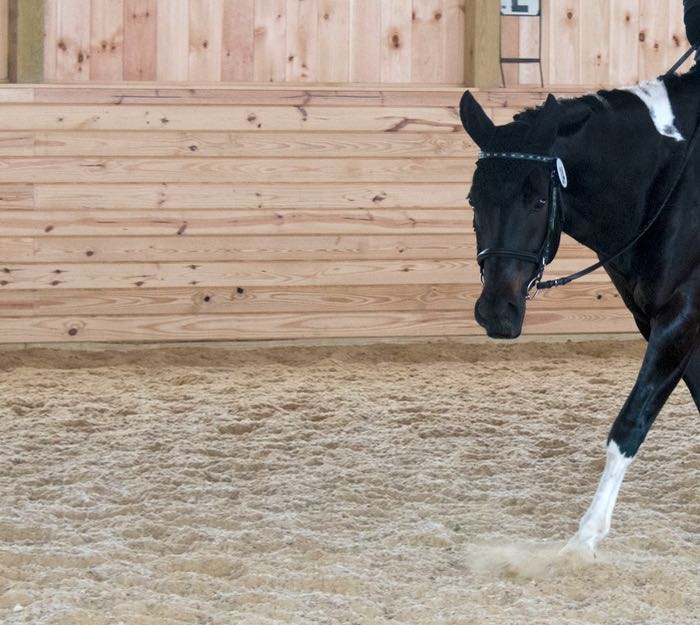 A horse’s sense of smell is far better than ours and conveys information that we are oblivious to. (For details about a horse’s sense of smell read this and this.) One good sniff and Tonka knew all he needed to know about that steel gray animal. Yes, she was a mare, but no, she wasn’t Maggie. From then on, as pretty as she was, Tonka ignored her. 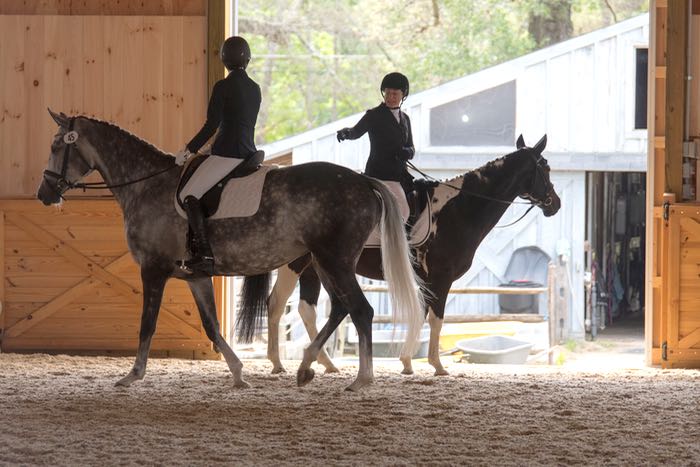 Part of developing a partnership is for each of us to trust that what we perceive dovetails with what the other is experiencing. There are times that Tonka spooks at something that I know isn’t dangerous. For example, almost silent bicycles appear quickly and with silvery glints of light. My human vision can make better sense of a bicycle than my horse’s eyes can. Tonka knows this – and that when I tell him that the thing hurtling towards us is okay, he trusts my judgement. What I never tell him is that what he’s alerting to is of no concern. I want his input, after all he knows things that I don’t. That rock outcropping on the trail that he snorted and hurried past every time we walked past for months? The one that looked normal to me? It turns out that it was a coyote den, I know because I finally saw the flash of grey tail. Tonka, of course, smelled the coyote. In fact, there were times that he alerted more adamantly at that rock than others – I’m sure he could smell if the coyote was nearby. For the last half-year he hasn’t worried at all by that rock. The coyote is gone. So, if Tonka neighs like a crazy horse at a show, I know there’s a reason behind it. Still, I want him to stop making a ruckus, and at the show I told him that his friend wasn’t there and to please quiet down. He didn’t believe me this time, not until he smelled her for himself, but I think that next time when I tell him She’s not here, he will trust me. If not, I’ll look for a steel grey horse and let him take a sniff.

Do you have a story about something that your animal was aware of and you were oblivious to? Please share! (Speaking of sharing, please use the social media button and share this post. Thanks!)

10 thoughts on “The Nose Knows”