The type of riding that I compete in, dressage, is rather formal. What one wears is dictated by show rules and tradition. Garb is muted and includes dark jackets, white shirts and breeches, and tall and polished black boots. None of that I mind so much, in fact I like how it looks, and the lack of flash puts the focus on the riding. Also, modern, stretchy, breathable fabrics makes it all rather comfortable (except for that stock tie around the neck, that I could do without!) 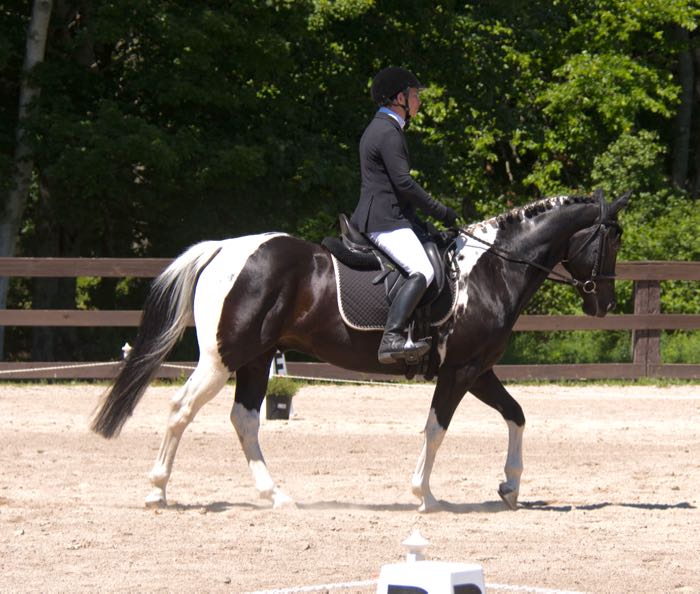 The horse is also subject to tradition and shows with a braided mane. 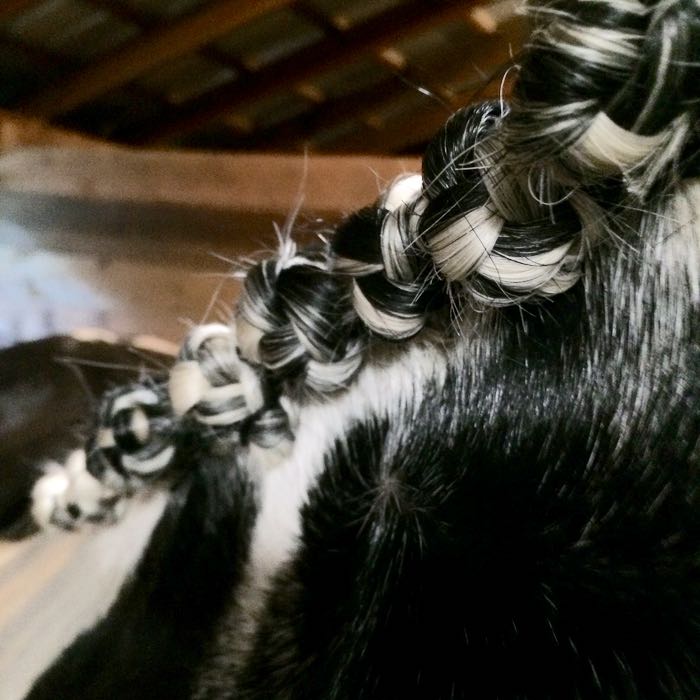 I won’t go into the details of how one does that here; it’s enough to know that it requires trimming and thinning, spritzing with “exhibitor's Quic Braid for Total Mane & Tail Control 16 oz Spray“, combing, braiding, and sewing. Tonka’s mane is particularly stiff and thick. It can take me an hour to do. I braid him the night before a show. He stands in the barn aisle, while I stand on a stool. 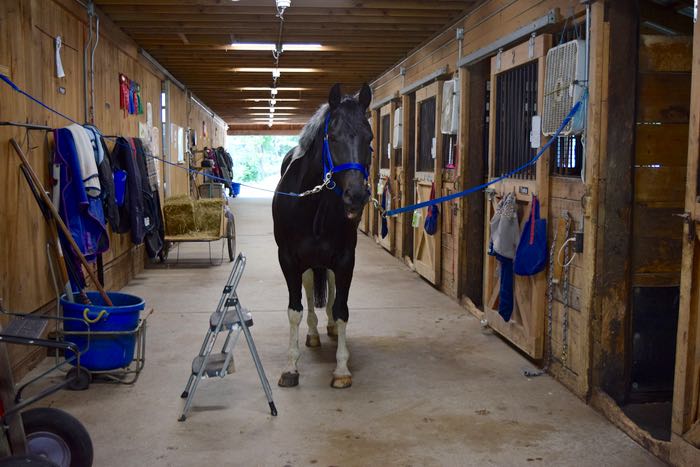 I have experience braiding, and I like to think that I go about doing it so that the braids don’t pull and bother him at their roots. Still, Tonka has never particularly liked his mane being fussed with, so I reward him for standing still. He’s a patient horse, but even Tonka gets bored.

Last Wednesday we went to a show, so Tuesday night I braided his mane. About 40 minutes into the process, I stepped off of the stool to get something. Tonka, with a distinct glint, and one eye on me to make sure that I was watching, picked up the stool in his mouth and threw it down the aisle! 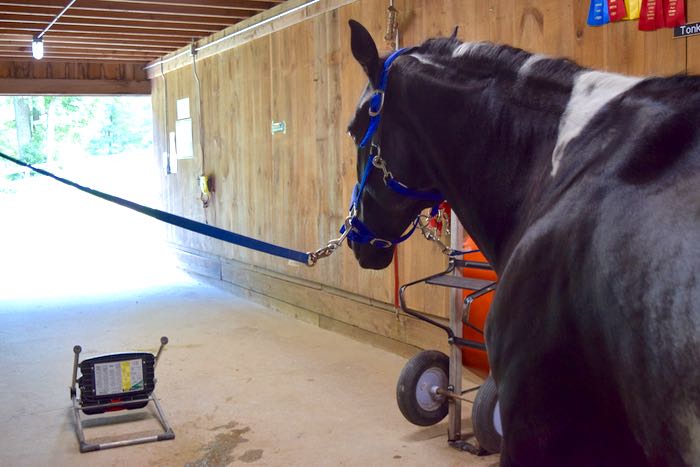 I think that my horse was quite pleased with the clatter and bang that it made. In fact, I think that he thought about that before he tossed the stool, because he didn’t flinch at the noise.

Tonka is used to having me listen to him. Horses rarely vocalize. Rather, they use body language and physical movement to express themselves. Tonka knows I’m not a horse and he knows that, in order for me to understand him, sometimes he has to do things that horses don’t usually do – like picking up a stool in his teeth and hurling it down the aisle.

I gave him a good scratching at the top line of his neck which he leaned into with appreciation. At this point there was only about ten minutes left of braiding, which I finished.

The next day we trailered to the show, where we competed against classic-looking dressage horses (big and mostly solid-colored.)

Tonka’s black and white coat might be in formal tuxedo colors, but he’s not a traditional horse! 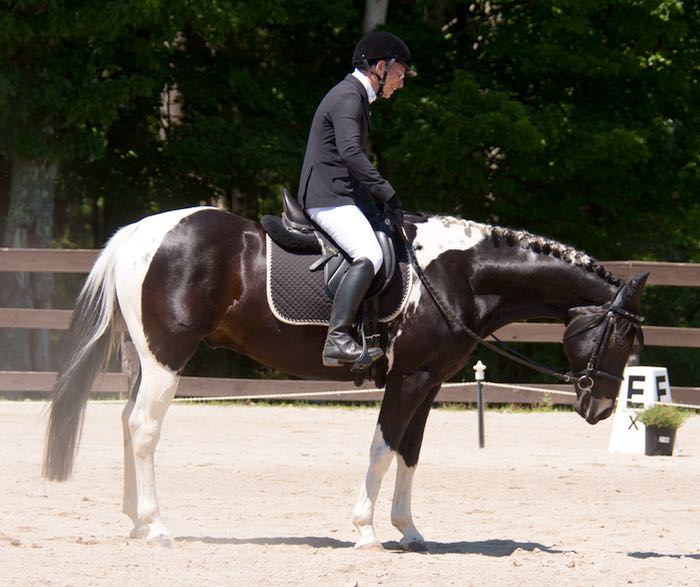 He does look tidy in those braids! But, as soon as we were done, I undid them while Tonka ate hay. 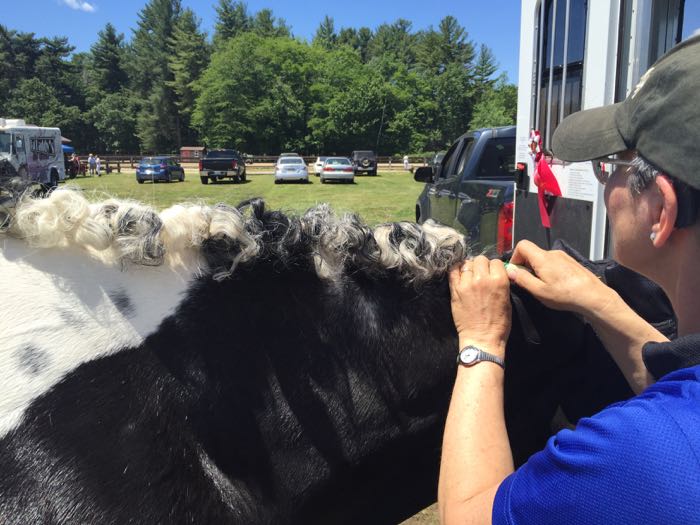 That product remained and so did the curls, so the next day, I shampooed it all out. 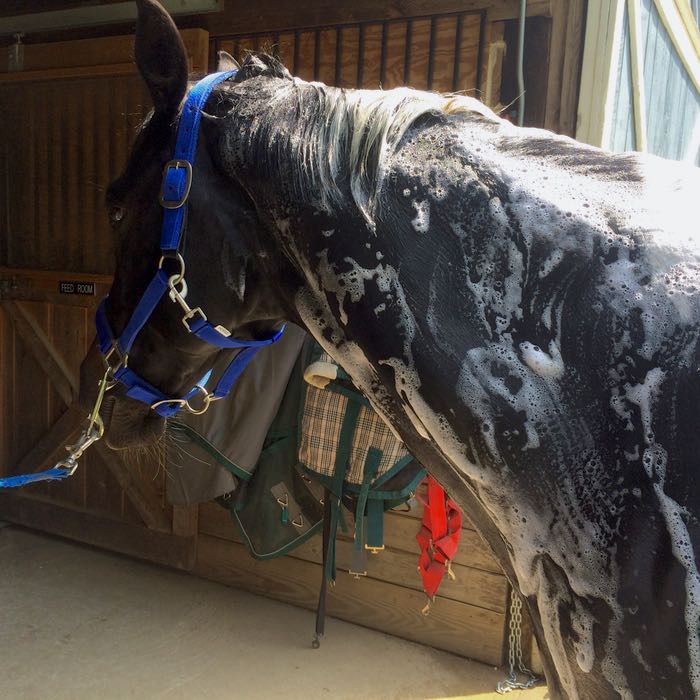 I think that Tonka was much relieved. 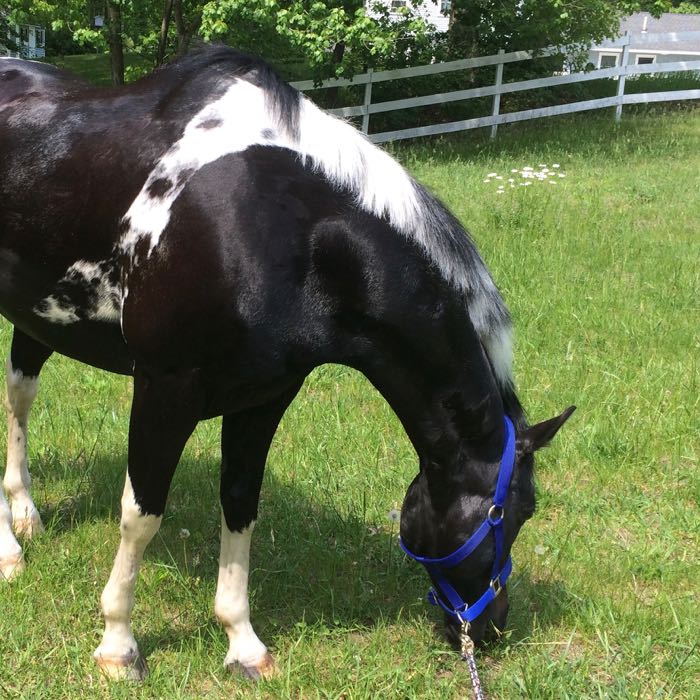