There’s a short, half-mile trail through the woods around the back of the stable where I keep Tonka. We travel it almost everyday. We walk it after a training session in the ring as a way to relax, stretch out and cool down. Then, there are days when neither Tonka nor I feel like schooling indoors and I don’t have the time to trailer out to more extensive trail systems, so we meander in the woods and then go over to the stone yard next door and putter around the piles of gravel and rocks. My horse is very familiar with these paths but that doesn’t mean that he’s dull to them.

Tonk is just about the sanest, calmest horse at the stable where we board. But he’s also the alert one. I think that these two traits go together. He’s the first one in the paddocks to look up to notice movement in the woods. Once he recognizes what it is (usually deer) he immediately settles. I’ve seen the other horses watch Tonka to decide what’s worth paying attention to. Although horses are prey animals, they aren’t necessarily the flight animals that we think they are. They don’t bolt off at no cause, and not necessarily even when alarmed. They stand and assess the situation first. In fact, they’re very curious animals. A horse faced with something new is likely to tense and snort (smell gives them a lot of information) and raise his head (which enables them to see ahead at a distance.) What happens next depends on the individual horse and the situation that they’re in. Innate temperament partly determines whether a horse goes into panic mode. Tonka is an inherently calm guy and nothing bad has happened in his life to change that. So, in a field, a horse like Tonka might decide to go towards that new thing and check it out. 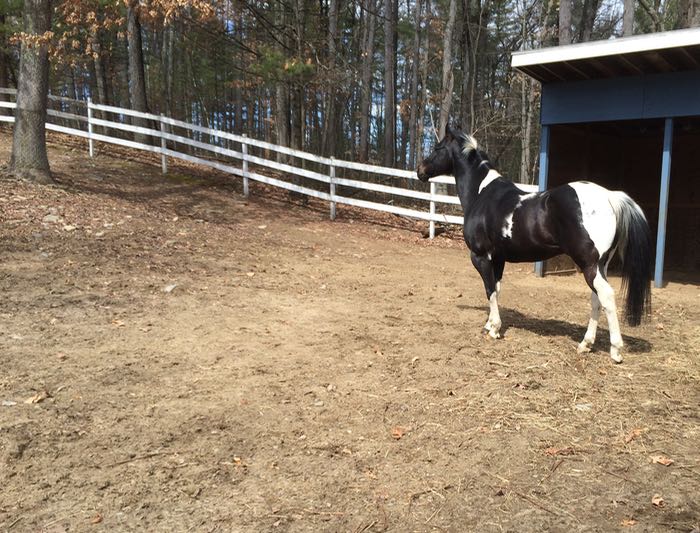 Out on the trails Tonka rarely spooks but he is always paying attention. Numerous times Tonka has let me know that a dog is coming down the path well before I see it. His awareness of his surroundings means that when riding his head isn’t in one position. In order to see, hear and smell, he swings his neck, and his head moves up and down. This sort of activity makes some riders uneasy, but it’s fine with me. Tonka is allowed to think about what he sees and to problem solve. The other day we were walking the loop. A hundred yards off the trail is a tract of suburban houses which Tonk usually ignores. But this time his head lifted and his body stiffened. What the heck? Just beyond the edge of the woods, a child was bounding up and down on a pogo stick! It was an unfamiliar flash of movement and an unfamiliar noise. I could feel him start to wheel around. Let’s go back that way, my safe barn is up the hill behind us. I sat deeper and breathed calmly (he can feel my breathing, just as I can feel his rib cage expand and contract.) However, although it’s okay for him to tell me that something unusual is up ahead, he’s not allowed to hightail it home! I asked Tonk to stay on the trail and to think about what was worrying him. As he turned to the left, I applied my left leg, calmly blocking the movement. I steadied his head with the reins. He straightened. His ears pointed towards the scary place. Tonka heard the childrens’ voices. He saw the pogo stick go up and down. He figured out that the weird ponging noise came from that. He was still tense but no longer vibrating. I asked him to walk on with a light squeeze from my calves and a verbal let’s go. The verbal cue is something that I have trained extensively from the ground with a high rate of reinforcement. Tonk walked on. In a few strides, he was back “on the buckle.” (There’s a buckle that holds the two reins together. Riding “on the buckle” means that you you are holding the reins at their longest point and don’t have any contact with the bit.)

There are many schools of thought about how to train a horse to go past something scary. I’ve written about that here. I have a certain approach, but each scenario is different. A couple of weeks ago we came up a hill and Tonka froze. His nostrils widened. I could tell he wanted to flee. We’d been on the buckle, which is fine for a relaxed walk, but limits my response in an emergency, so I shortened the reins to a light contact, closed my legs, and let Tonka know that we should stand and assess. At that moment several crows rocketed past on their way to the open area ahead. Something dead was up there. Sometimes it’s best to recognize that a retreat is the smart thing to do – as long as it’s done calmly and the rider makes that call! Tonka stood on that hill on high alert, waiting for word from me about what to do next. I shifted my seat and lightly applied my legs, the cue for him to turn around and walk on. We headed, calmly, away from whatever was exciting those crows. Only a few strides later, we were back on the buckle. From that relaxed place I said “ho” and he stopped. I gave Tonk a peppermint, his absolute favorite treat. We walked on as he crunched and enjoyed the minty scent wafting up his nose. Powerful positive reinforcement for calm behavior!

Yesterday we headed down a new trail at a conservation area that we frequently ride through. Suddenly, Tonka’s head went up and he refused to move. His entire body quivered. Tonka had spied a bicycle ramp (well before I noticed it!) To Tonka, it must have been like one of those puzzles of “what doesn’t belong here?” 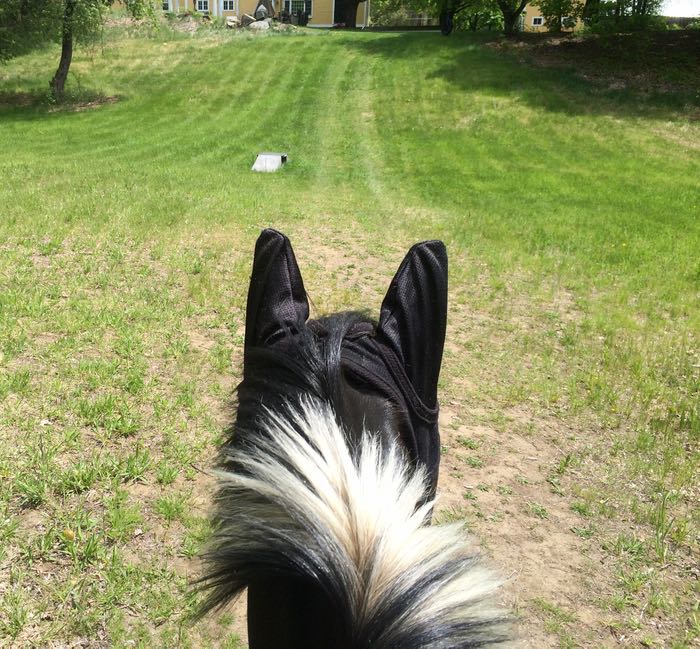 Tonka clearly wanted to wheel around and leave that scary thing so I took up contact with the reins to keep him in place. I closed my legs and asked him to move forward. His response was No way, and he tried to back up. I blocked that with my legs, but didn’t force him forward. I let him to think about it. He did. Before asking him to walk on again, I waited until I felt him checking back in with me with a Do you see that? What do you think? Then I could tell him that I knew what it was and to trust me, it’s not going to hurt us. With that reassurance, we went on down trail. On the buckle. 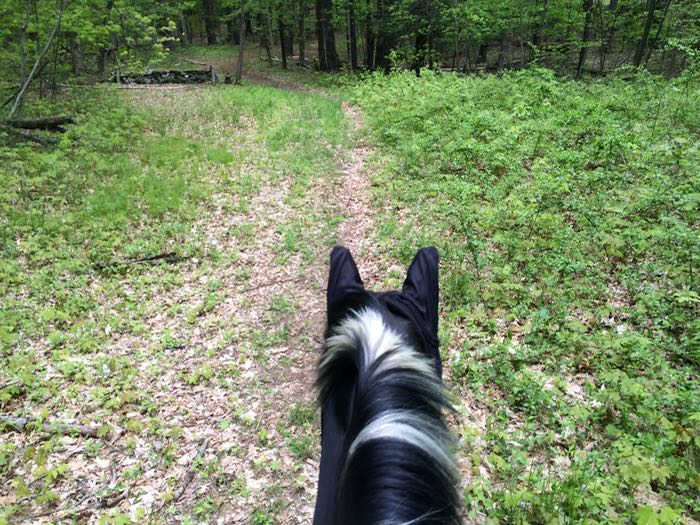 We passed that ramp again on the way back to the trail head. Tonka lifted his head high and stared, but he didn’t balk and he walked on by.

Situations handled this way make him confident and resilient. Me, too! I trust that he can look, snort and hesitate, but that he’ll also listen to me. The next time Tonka comes across a child on a pogo stick, he’ll be nonchalant about it. If I had forced him past he would have associated being scared with both the frightening thing and punishment from me. Do that enough times and when the horse gets into a worrisome situation they become even more worried. I have a new training client named Colleen. She called me because she’s starting to do little jumps with her horse who was refusing to go over obstacles. Her riding teacher told her to make the horse more scared of you than the jump.  Sadly, this is not atypical in the horse world. Colleen asked if I had another way. I do.

Some people want their horses to stand, oblivious to their surroundings, only moving on when directed to. This does feel safe to the rider, but what does it mean for the horse? To get a horse to be like that takes a type of training that overwhelms the horse with stimuli but that prevents them from reacting to it. Scientists even call this “flooding.” In behavior science terms, flooding creates something called learned helplessness. Put a lab rat in a box with a floor that shocks it so that it can’t move away from the pain and soon enough it will stand there and take the shocks, even after an escape route is opened up. Such learned helplessness leads to tonic immobility – I’ve seen plenty of “funny” videos on YouTube of animals looking catatonic (the rabbit in the sink, the lizard stroked while upside down, a chicken “hypnotized” in a prone position.) They’re not relaxed. They’re terrified and playing ‘possum. You can do that to horses, too, by chasing them around a round pen with a whip until their only option is to give up, covering them with a tarp (or bringing them down on their sides and tying their legs) until they stop moving, and by making the horse move in a tight circle by pulling on the bit and spurring until she gives up. You might take the fight out of the horse, but you also take away their ability to think.

I want a thinking horse. The joy of riding to me is the two-way communication. It’s not just me telling him what to do and having him respond like an automaton. I want my horse’s input, and I want him to want mine. Compared to Tonka, I have dull senses. He knows so much more than me about what is out there. I love seeing the world from his viewpoint. I notice so much more when he shares what he knows with me. But, I’m the one who can help him to make sense of it. Allow the dialog and your horse will come to rely on you as much as you rely on him. Going on the buckle is as much an attitude as it is a way to hold the reins. To do it takes time and hours in the saddle. It takes confidence and trust. Like everything else with riding, it’s not an end goal but a path. 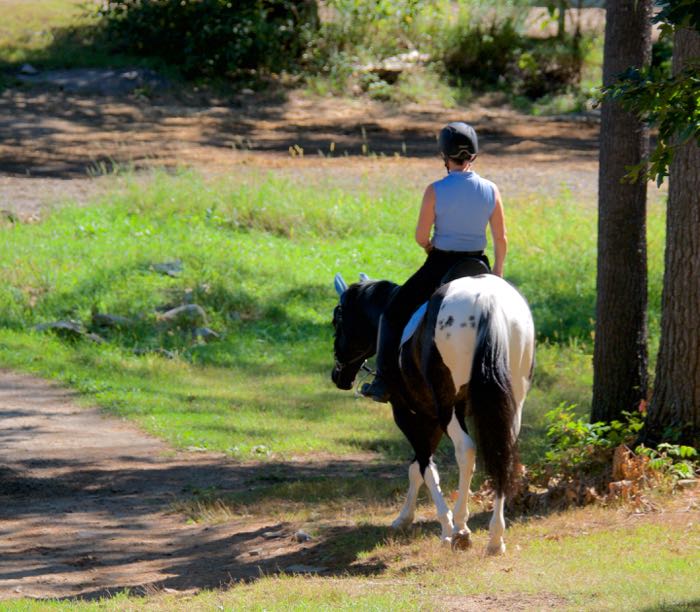 Riding on the buckle

11 thoughts on “On The Buckle”