I love horses and they’re the focus of what I do, but I openly admit that my absolute favorite animal to train is the goat. Goats are endlessly enthusiastic and always in the game. Whatever I bring to an interaction with them, they add to it, with great good cheer and always a bit of chaos. My own two pet goats never, ever have a bad day. So, I was delighted to be called in to help Elizabeth with her three, year-old Nigerian Dwarf wethers. I knew Elizabeth from my chicken keeping workshops. Awhile back she talked to me about getting more hens and I suggested getting goats instead. She did! (I’m a good influence that way.)

After deciding to embark on the goat adventure, Elizabeth found a small breeder who sold her three goats. These lucky boys ended up in a perfect home. Elizabeth’s husband built a shed and enclosure. Some of you will recognize his work, his chicken coop is one of the most shared photos off of the HenCam. Elizabeth and hubby are madly in love with these goats and revel in their antics. However, there are a few situations that Elizabeth wondered if the goats could possibly have some manners. They’re typical goats – if a gate opens they want to go out, even if it means barging past whoever is there. Also, goats need to have their hooves trimmed on a regular basis. The task itself is easy for the owner to do, however it’s made quite difficult because of the fact that goats hate to have their legs touched and their feet held. Elizabeth asked if I could show her how to train the goats to behave at the gate and to stand for trimming. Of course!

I arrived for a training session last Saturday. After an enthusiastic goatie greeting, I sat down with Elizabeth to discuss overall goals and how to achieve them. First up was to devise a plan so that Elizabeth could enter and exit the pen without a goat scrimmage ensuing. It’s always better to teach something that an animal CAN do, rather that tell them no for a behavior you don’t want. I suggested that each goat have an assigned station. Elizabeth had acquired three spools for this purpose. The idea was that Elizabeth would be able to walk to the gate, say up!up! and the goats would leap onto their stations, where they would wait while she entered the enclosure and then closed the gate after herself. Sounds polite, doesn’t it?

However, this goal behavior is complex and challenging for both trainer and goats. First off, it requires the goats to go away from the gate and their person, which is counterintuitive to goats that believe in enthusiastic greetings. Then, they have to jump onto their assigned spools and to stay there for somewhere under a minute. Sixty seconds is eons to a goat. To achieve this we devised a training plan that broke this scenario down into small components. Each will be taught and built on.

Goats love jumping up on things, so the first step of getting them on the spools was not hard at all. It was more of a challenge to teach them that it was one spool per goat, and that each had his assigned place. To do this, I rewarded each goat for being on his correct spool, but not on his brother’s. 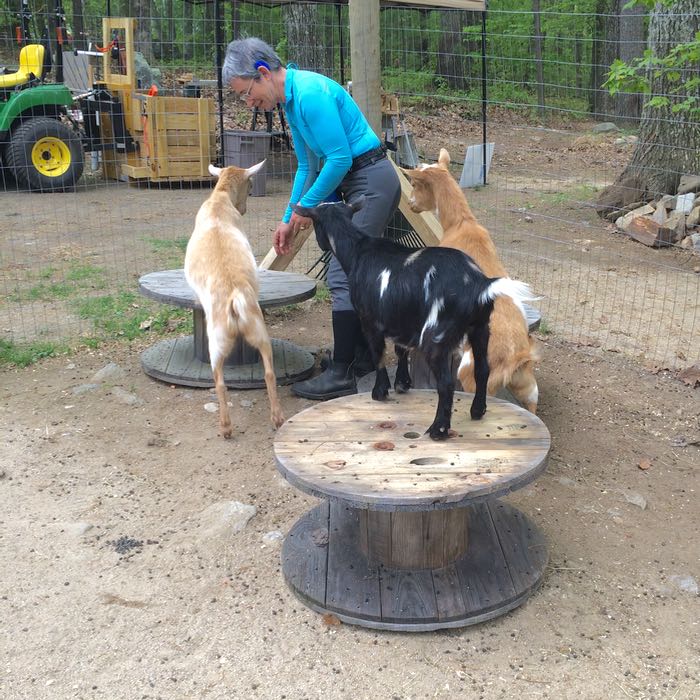 Teddy got this right away. Teddy is the small one who gets pushed around. Teddy almost immediately realized that when he stood on his station, that good things came and that the other goats left him alone. Teddy quickly decided that his spool is the best place, ever. 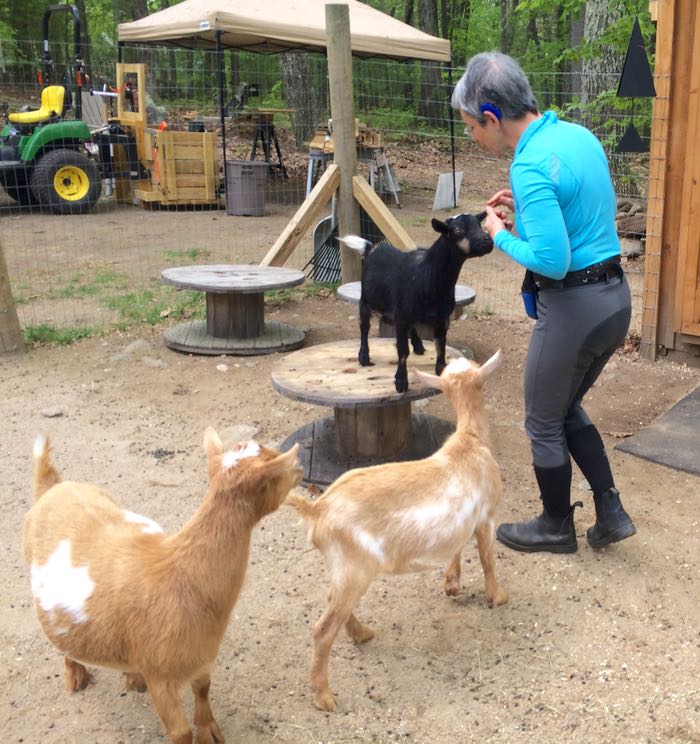 Hawkeye and Lincoln did more typical goatie head butting and leaping. But goats have sharp minds. I fed Hawkeye on his spool, but Lincoln didn’t get anything. 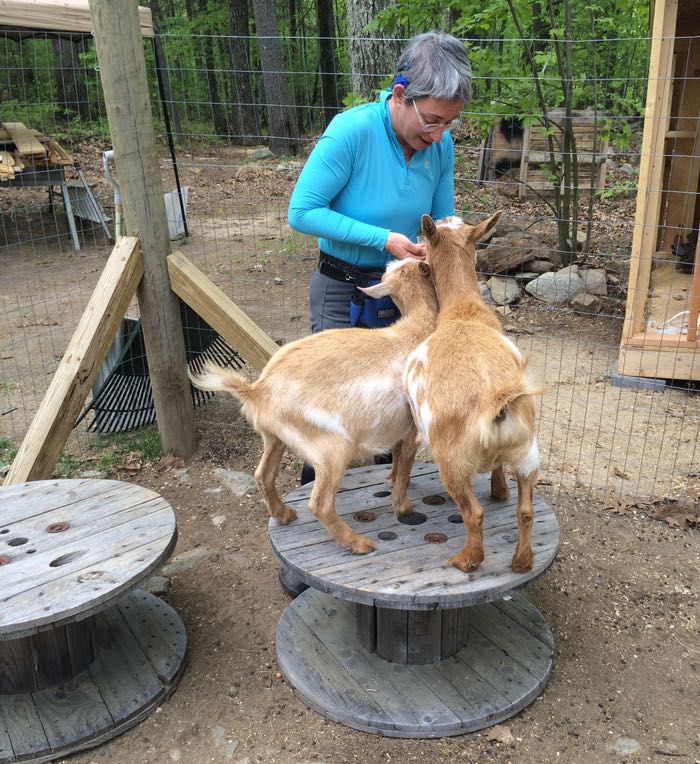 Then Lincoln leapt onto the empty spool where he did get rewarded. You could practically see his brain light up. Note that while Hawkeye and Lincoln were playing king of the mountain, that Teddy stayed squarely on his station. Elizabeth slipped him a treat now and then. Teddy is very smart. 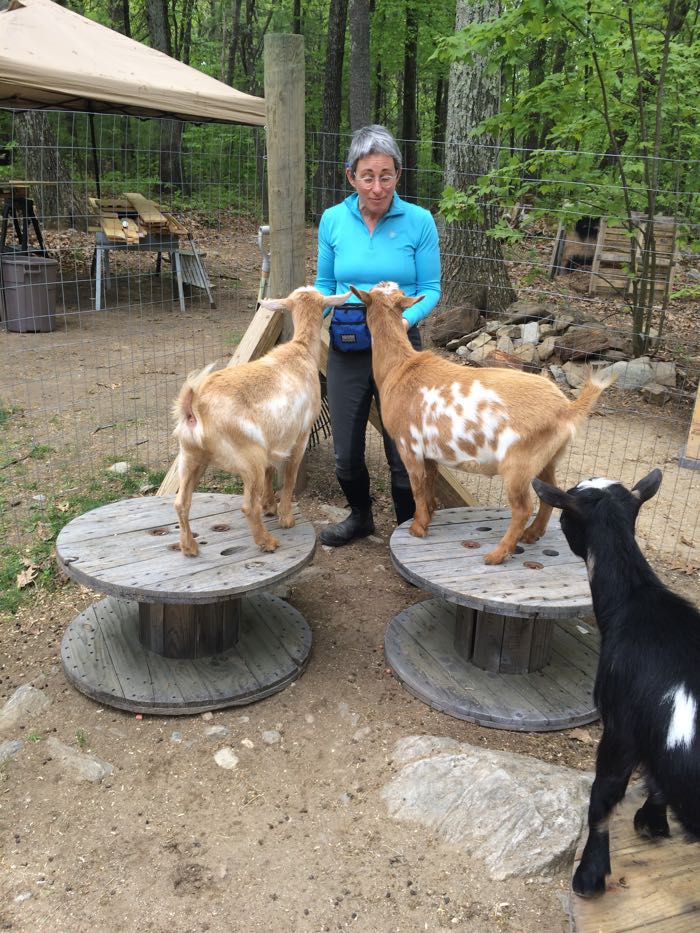 Each training session lasted about 5 minutes. We took breaks and chatted and then returned to the goats. In only 5 sessions over the course of an hour, the goats all knew which spool was his. Success! 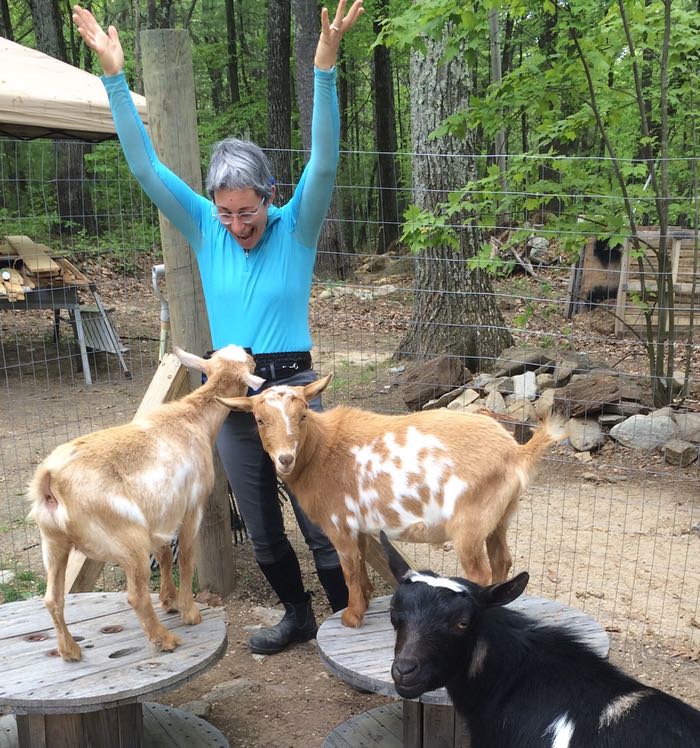 But this is only the beginning. It’s easy enough to get a behavior, but that’s (to use a cliche) the tip of the iceberg. The important stuff was yet to be done.

Behaviors must be put on cue both to make them useful (if the animals don’t do a task when asked, it’s not helpful) and for safety. You don’t want the behavior offered when not asked for. If they “throw a behavior” at you in hopes of a reward, it can be dangerous. An example is a horse that lifts his foot unasked. An unexpected hoof flying up can cause a lot of damage. So, although the morning’s work with the goats seemed impressive, this behavior was nowhere near trained to completion. Elizabeth will do cue training in future sessions. She’ll be adding the verbal up!up! right as a goat hops onto his spool. Then, she’ll say that a second before. Then a few seconds before. Soon enough, the goats will jump onto their stations when they hear the cue. But that’s not it! Once they’re going up on the spools Elizabeth will have to move further and further away from the stations until she can say the cue from the gate, and then from behind the gate. This sounds like it’ll take a lot of time, but actually, the more you break it down and reward each step, the quicker they’ll learn it. My mantra is: The slower you go, the faster you’ll get there.

Also part of that unseen iceberg is duration. At first I was happy when the goats jumped onto the spools. But if I only rewarded the jumping up, I’d have three goats bounding on and off the stations – not the behavior I want! So, during the training sessions, I incrementally increased the amount of time that they stood there before rewarding. First two seconds on, then four, then seven, etc.

The type of training that I do lets the animal know that they’re doing the right thing and that what they do is rewarding (giving them something good increases the likelihood that they’ll repeat the behavior that you want.) There are a variety of ways to let the goats know that they are on the right track and that a reward will be forthcoming. I could say a word of praise, like “good boy” or I could also use a

. A clicker makes a distinct sound which marks the exact moment that you want. After the click, you hand over the treat. The clicker can bring clarity to the training and make it more precise. The goat understands that it’s the moment of the click that earns the reinforcement. This is important because goats move fast. Without the clicker this might happen: let’s say Lincoln clambers on the spool and I reach into my Doggone Good! Rapid Reward Pouch w/Free Belt Strap Buy Directly from Manufacturer to get out a carrot coin. As I hand him the food he head butts Hawkeye. Uh, oh, I’ve just rewarded head butting. But if I click while he’s standing politely, then Lincoln knows that’s what he has to do to earn the treat. That click clearly communicates the exact moment I really want and so it buys me a little time to fork over the treat without the message getting muddied. On the other hand, clickers can be too effective. If you’re not experienced, or if you feel discombobulated holding a clicker and treats while goats bound around you, and you click a tad late, you might inadvertently teach something that you don’t want. For example, if you click as the goat is jumping off of the spool, you’ll be rewarding the goat for leaping. If you do that once it’s no big deal. Repeat that twice with a smart goat and you’ve taught the opposite of what you want! For Hawkeye, Lincoln and Teddy, I used the clicker when the correct behavior was obvious, but during typical three-goat chaos, I used verbal good boys and frequent reinforcement, which was effective enough and suited the situation. One other option when your hands are full is to use a tongue click or other distinctive sound as a substitute for a hand-held clicker. (I use a quick “dee” for Tonka when I’m riding.)

When training, it helps to manage the environment. Looking at the photos makes me realize that I could have moved Lincoln and Hawkeye’s spools further apart to reduce head butting. Also, Hawkeye is the goat who likes to be king of the yard and so his spool will be raised up a few inches. Hawkeye will love that distinction, he’ll be less inclined to jump onto the other spools, and Teddy and Lincoln will leave his alone.

This was a lot for the goats to learn in one hour, but we weren’t done. As I said, goats stay in the game. Next up was to show Elizabeth how to handle their legs and hooves. It helped that the boys were enjoying their stations! For this demo, (after this photo was taken) we did put two of the goats into their shed so that we could work one at a time. When working with one animal in a herd, it’s often best (and safest) to separate the learner. I started well below threshold with a light touch with a flat palm for nary a second on the leg. Lincoln was told good boy! and given a piece of carrot. 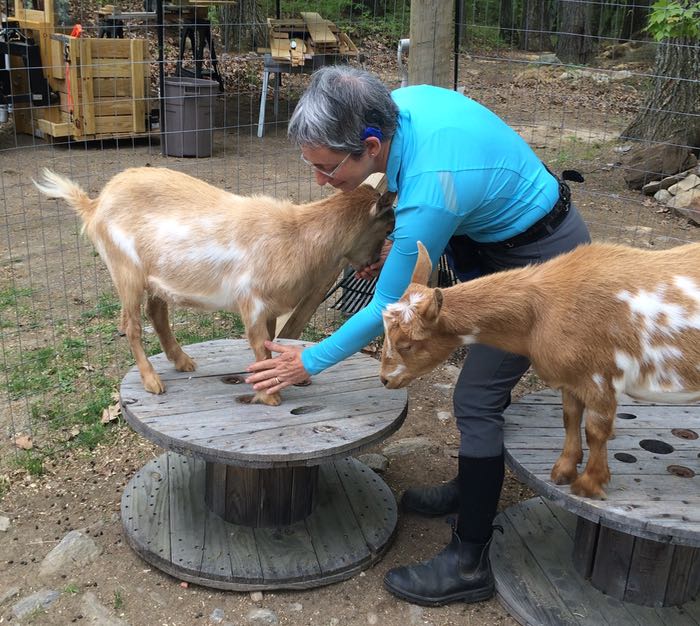 I limit a session like this to only a couple of minutes and about 20 rewards. In that short time I was able to wrap my hand around the leg and apply a bit of pressure without Lincoln flinching. I ended when he let me hold his foot up for a second. I stopped before he pulled away. That’s important! You train to a point of success, not beyond that to resistance. That sensitivity and timing is what makes the training progress quickly and stress-free.

Elizabeth has her homework mapped out. I can’t wait to go back and see how Hawkeye, Lincoln and Teddy are doing. 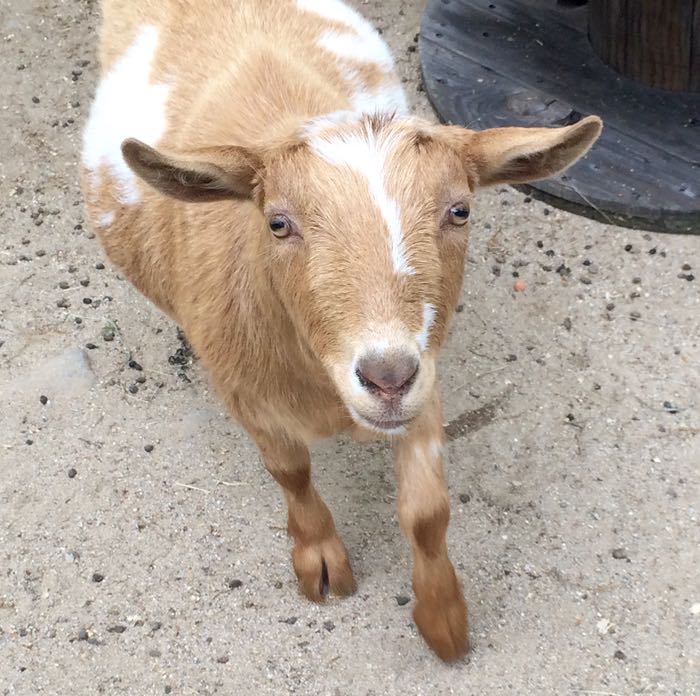