I named the eleven acres that Steve and I own in southern Maine, Turtle Hill because it’s prime real estate for these animals. The field has sandy, pebbly soil, with bare areas, but also a wide variety of plants, from native blueberries to grasses and wintergreen. It has sunny slopes and borders a beaver marsh. The woods that surround it have vernal pools. Ideal breeding territory for turtles. The first half of June is when they lay their eggs here. It’s already been busy! The majority of the turtles that we see are Painted Turtles. 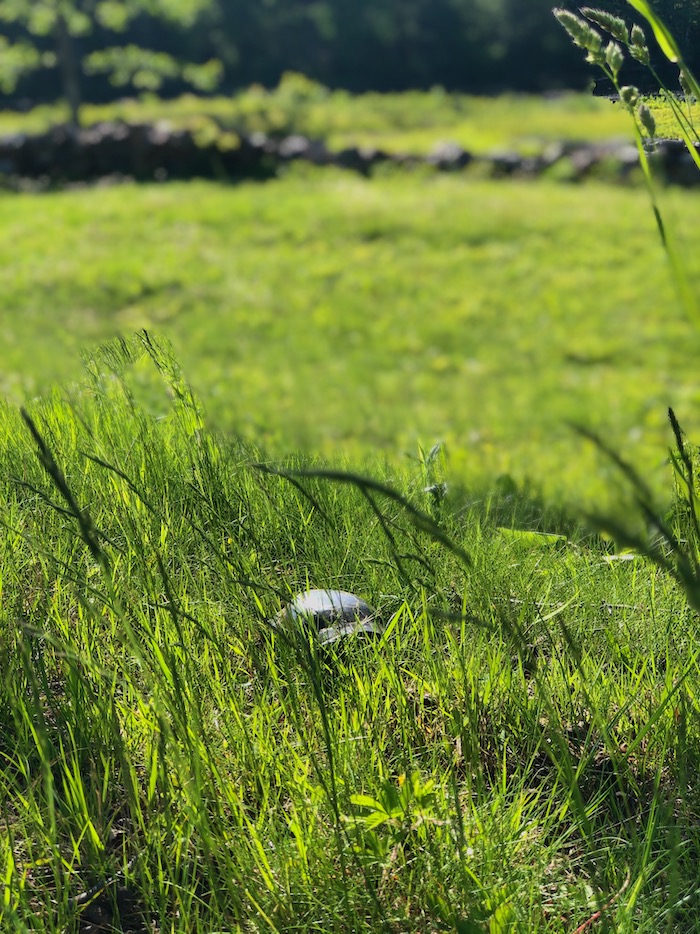 The endangered Blanding’s Turtle also lives here. It’s exciting to spot one in a lifetime. We’ve seen two so far. 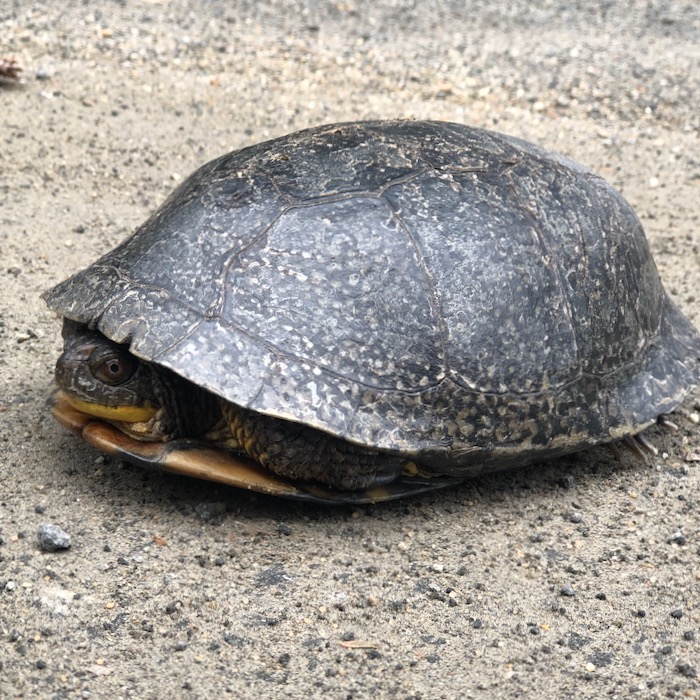 But I could have named this place Porcupine Hill. It’s ideal habitat for these animals, too. Like all valued home sites, especially in today’s hot real estate market, many will want to live there, but only a few can achieve that dream. The field has many delicious plants growing in it; porcupines especially like clover. There are five large oak trees, all of which provide yummy and nutritious leaves and acorns, as well as places to nap. 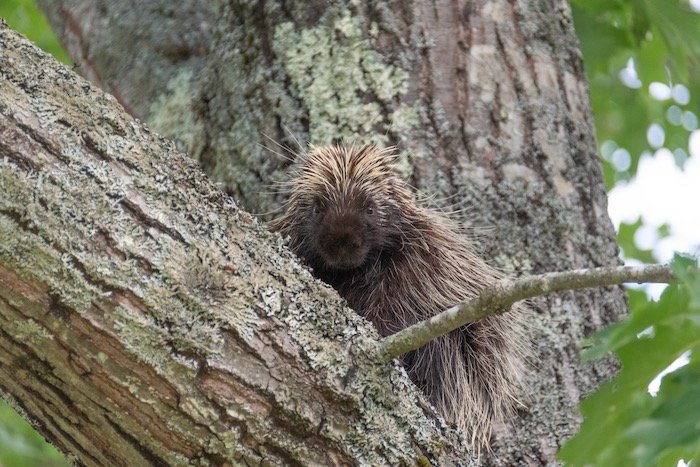 Porcupines are solitary animals. Each has their own territory. A mother will live with her offspring for a year, but even then they keep their distance. A porcupette will be left at the base of a tree while a mama forages or sleeps. Once a day she’ll nurse. She will teach her youngster what is good to eat, and where to den in the winter. But porcupines believe in alone time.

For my first two years at Turtle Hill, the resident porcupine was Po. That’s who you see in the above photo. Look at that wonderful smushy nose! Last year she had a baby that I named Clover. He had a distinctive narrow nose and a rather disheveled appearance. 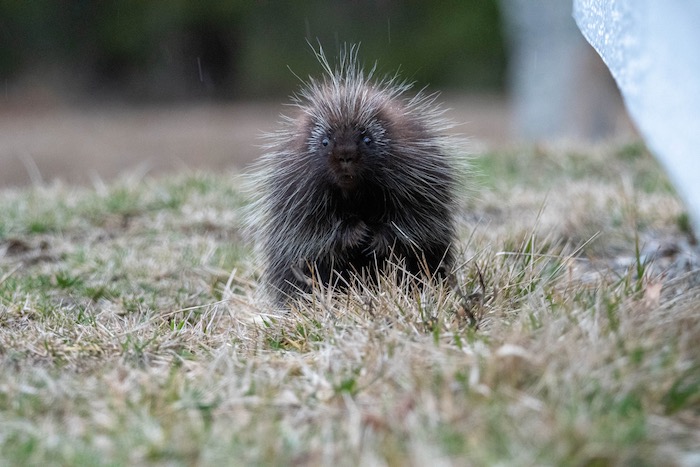 Sadly, Po died last fall. We found her skull in the field. It’s hard for a yearling porcupine to survive on his own, but Clover did! We saw him in the snow. 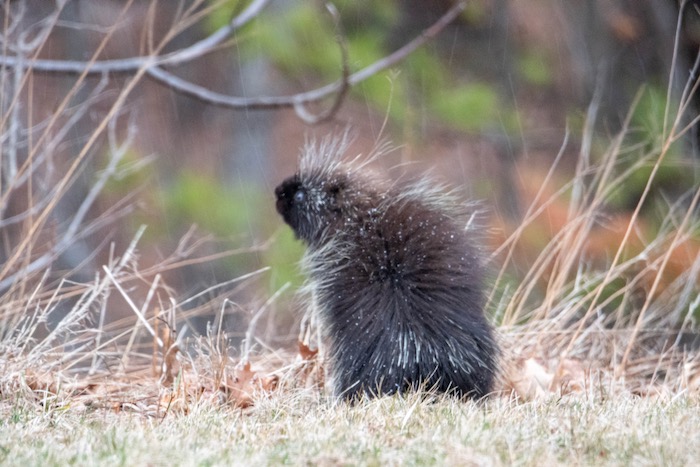 We saw him foraging for acorns early this springtime. We saw him sleeping in the same tree that his mother, Po, used to nap in.

Our human neighbors have a resident porcupine, too. She’s had a porcupette in tow this summer. This porcupine has had access to woods and a lawn, but not this hill, perfectly sited oak trees, and swath of clover. 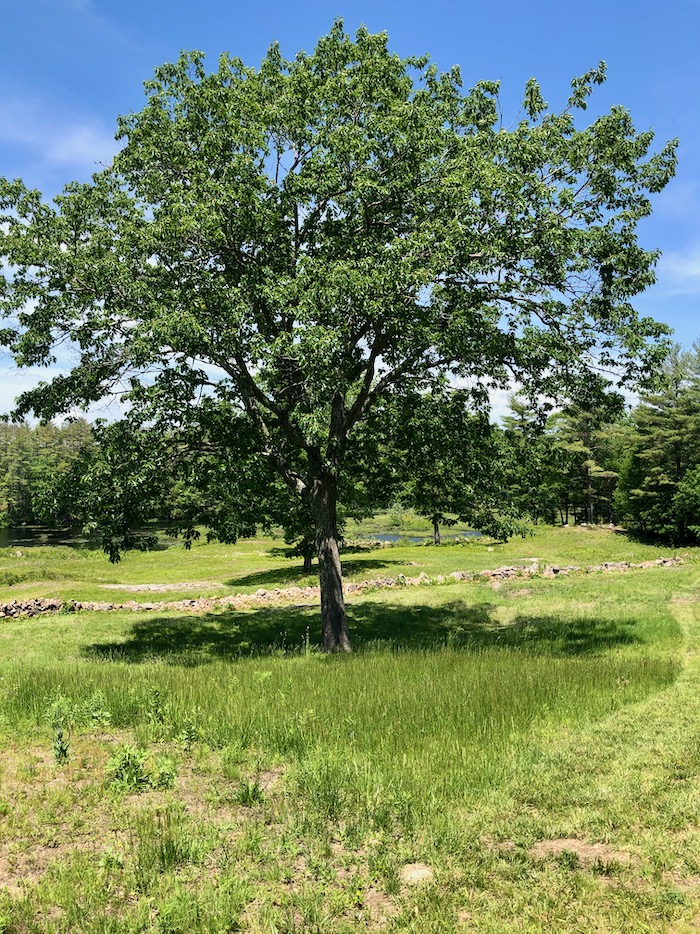 Clover was no match for a mama porcupine who wanted to move up in the world. The other night she moved in. Clover moved down the hill. 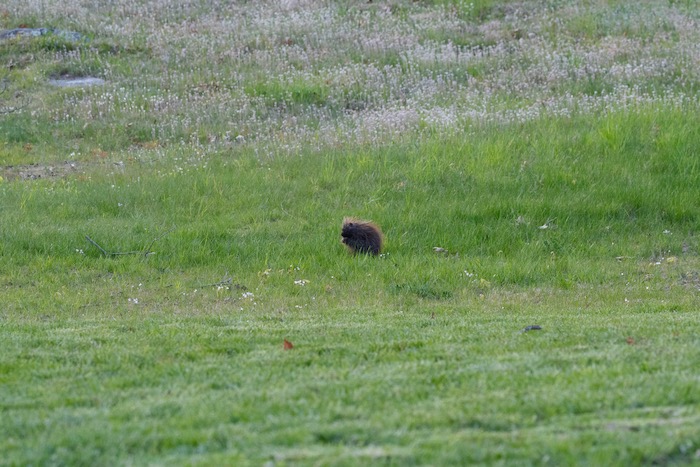 I don’t know how far away Clover has to be to be far enough away for our newest porcupine landholder. I don’t think that she’ll tolerate Clover on her Turtle Hill.

We’re in the middle of a heatwave. Just like Po, this mama, who I’ve named Hattie, is spending it in the crook of Oak # 1. She has a distinctive wide brown nose and a crown of white quills. 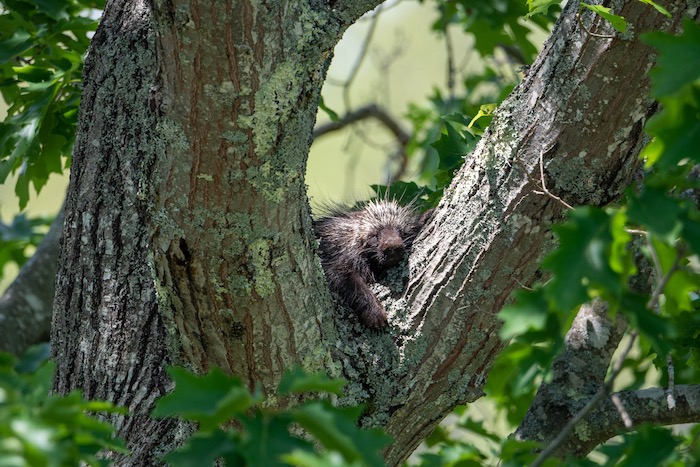 It’s breezy and shady in the tree. Oak #1 is the equivalent of a million dollar property. Getting to it takes some doing, but Hattie has claws and sticky pads on the bottom of her feet, and the strength to make her way to her pied-à-terre. 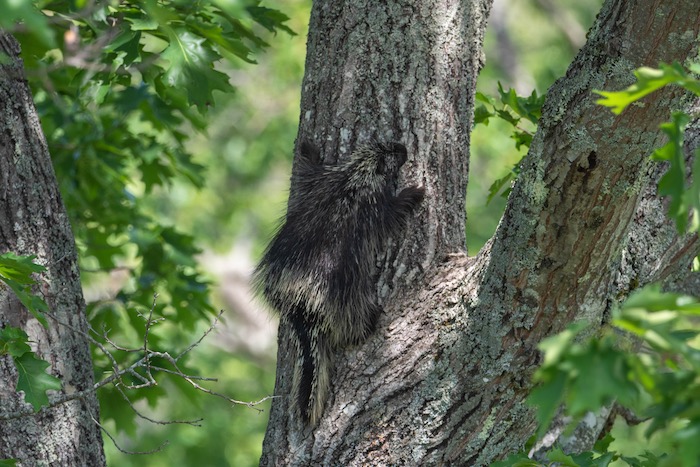 Hattie’s porcupette isn’t welcome to stay all day. Like so many mothers, Hattie has told them to “go outside and don’t bother me.” Today I watched the porcupette make their way down the tree, across the field, over the stone walls, and disappear to the steep side of the hill facing the marsh. Is there a den there for them? A path to another tree to spend the day in? I have no idea.

What I do know is that Clover is looking for a new home. Which is tough for an adolescent on his own. Maybe he’ll move into Hattie’s old digs, which is certainly a good starter home. Meanwhile, Hattie and her offspring have moved up in the world. To Turtle Hill.