Tonka and I had a jump lesson on Wednesday. He knew what was about to happen and enthusiastically warmed up, but that was interrupted when he coughed a couple of times. Horses, like us, cough to clear our throats. It can be jarring when you’re on top of a horse who is doing this! Their sides stiffen, they extend their neck and their whole body shakes. A one-off cough isn’t a big deal, but anything more than that can be. Horses have huge lungs that process a lot of air, which means that if something obstructs that air flow your horse is going to feel it. All of that air passes through the nostrils, never the mouth. Horses cannot breathe through their mouths! The horse’s anatomy is similar, but also dissimilar to ours. They have something that we don’t – a very long soft palate separates their airway from their mouth. We, on the other hand, have a short palate which opens up to a chamber at the back of our throat. It’s there that what we breathe through our noses and what we take into our mouths are combined. It’s why we can be rude and eat and talk at the same time. When a horse breathes, the route to the mouth is blocked off and air has only one path to take, into the trachea and to the lungs. Alternately, when a horse grabs a bite of grass and swallows, airflow from the nose is closed off while the food from the mouth heads into the digestive tract. It’s either/or. Never at the same time. This complex anatomy is designed to keep the two functions (eating and breathing) well-separated. For a huge animal that gallops at speed with a full intestinal tract moving like a piston, this design is very clever. It keeps oxygen flowing into the lungs without the danger of stuff from the digestive system contaminating the airways. But this also means that if there’s irritation or blockage going on in those nasal cavities, that the horse doesn’t have an alternate way (through the mouth) to breathe. This is one reason why horses with snotty noses are so miserable and in such danger. It also means that they can’t breathe and cough at the same time.

There are plenty of reasons why a horse might cough. Sometimes there’s a serious disease. Tonka was bright-eyed and didn’t have nasal discharge. No sign of illness. It wasn’t an incessant cough. So I kept riding. 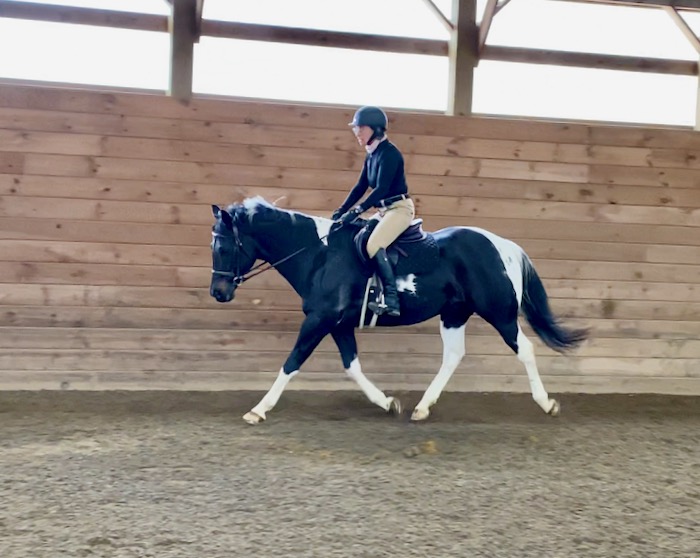 Tonka jumped happily and even did a nice simple change.

But then there was this.

We were headed for a jump, but I pulled Tonka up. He needed to breathe. We were both disappointed that our lesson was interrupted. 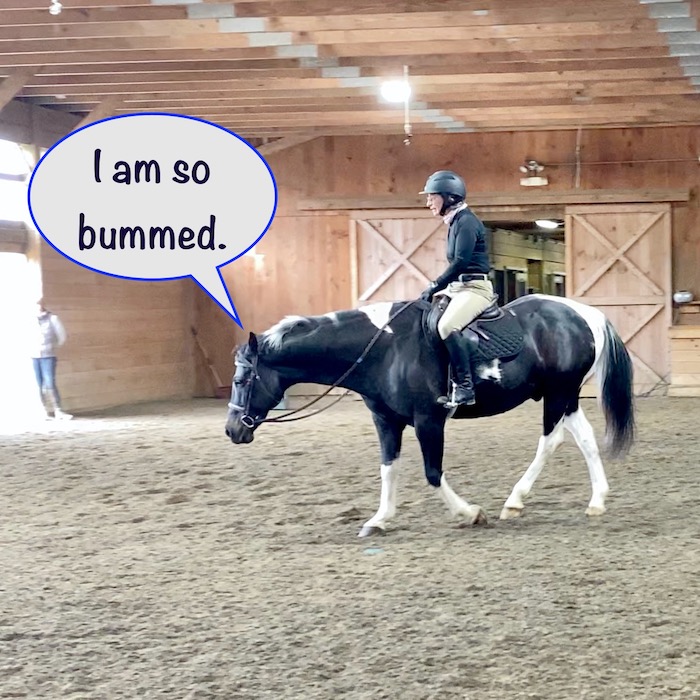 The coughing wasn’t constant, so I picked up the reins to end on a good note. We then stopped there without further exertion.

Once back in his stall I took Tonka’s temperature. It was normal. Although there were no signs that this was a serious ailment, I still called my veterinarian. Coughing is not a “wait and see” symptom. Dr. Monika said that she could come out the following day. The plan was to listen to Tonka’s lungs and to diagnose whether the coughing was due to irritants, allergies, or something else more dire.

It turned out that Monika didn’t have to see Tonka. The next day the cough was gone. My best guess is that Tonka’s respiratory system had become irritated. The day before the lesson was windy. The horses were in due to excessive mud in the paddocks. The loft was swept out to prepare for a hay delivery. Loose forage had been raked up and fed to the horses. It was good hay, but short like chaff rather than in long stems. Tonka, although happy as a clam to have this bonus forage, likely got his cough from a combination of the dust, the wind and the tiny pieces of hay swirling in the air. Perhaps a strong wind blew a bit of it up his nose. In the past Tonka has had a cough when his environment became temporarily more dusty than usual, and this is allergy season which could compound his reaction. This shows how sensitive horses can be to changes in weather, air quality, and type of forage. So far, several days later, Tonka is fine. The cough has not returned. Has your horse had a respiratory issue due to the environment? Let me know in the comments!

4 thoughts on “Tonka Had a Cough”