I’ve had Tonka for seven years and there hasn’t been a day with him that I haven’t worked on a certain behavior. Actually, it’s more of a mindset. I call it connected relaxation. With attention to this goal, and consistency in training, it has come to underlie everything that my horse and I do together, and it pays off. I reaped the benefit of this mindset again yesterday. I don’t have a photo (things happened quickly!) but I do have plenty of illustrations that lead up to it that can explain what this is about.

Safety is paramount with our life around horses. We want them to stand quietly, to lead calmly, to not spook, or wheel, or bolt in fear, both on the ground and from the saddle. That’s all good, but I want my horse to do those things with a certain mindset – one in which he wants to be in a relaxed default because it is a place that feels good to him and that he knows that good things happen because of it. Not only that, I want him to be relaxed while still checking in with me. With connected relaxation, when faced with a stressful incident, Tonka is able to find the inner resources to self-calm, and turn to me and ask What should we do now?

To get this, I’ve worked with Tonka so that he believes that relating to the world around him with relaxation is the best course of action. That good things happen when he is sane, and then even better things happen because he is with me. I reinforce the behavior I want with all sorts of things, from food, to access to turnout. But it’s also self- reinforcing because horses innately want to be in a calm state of mind. Once he realizes that he can cope with stress by going to a calm place, he’ll do it without prompting. We often think about training horses as something that happens in the riding ring, or the barn aisle, but since life doesn’t happen only in those places, this training needs to be done everywhere. Here are some examples.

When I turn Tonka out into his grass field, he gets his freedom only when he pays attention to me and has a calm stance. I don’t take off his halter until I see those muscles relax. 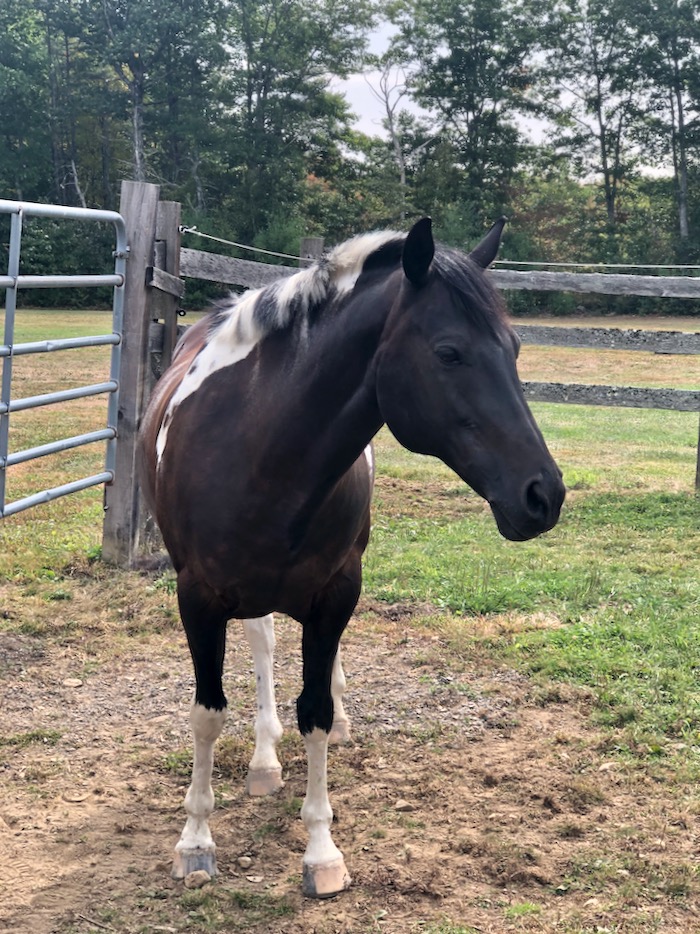 When he’s released, Tonka sometimes goes from chill to bronco-pony. That’s fine. The bucking playtime is his reward for calm. Training a horse to be still before being let go pays off. Sometimes I let Tonka let off steam in the outside sand arena. I want this to happen safely for me. It’s dangerous when a horse yanks a lead out of your hand, or starts hopping when you are still near those flying hoofs. It’s not good enough for me to have a horse stand with all four on the floor before unclipping the line. I want the horse to be relaxed and paying attention to me. This is what Tonka does. Then, once given the ok, he’ll snort and buck and gallop about. 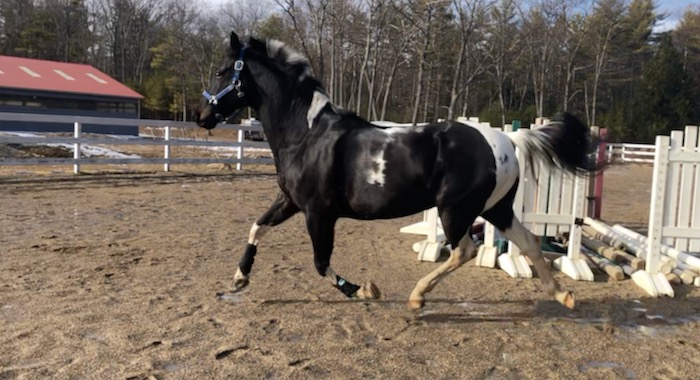 When Tonka is done whooping it up, he trots back to me. His body language can be rather dramatic and I’d be worried except I know that he knows that the next activity (often hand-grazing in the field) doesn’t happen until he calms himself down. I can actually see him make the effort to breathe slower to get into that mental space before getting too close to me.

Here’s another example. Last summer I went to a new facility to do a training session with a mounted search and rescue team. After the ring work, everyone but me went for a ride in the woods (I was avoiding stinging insects.) Tonka, of course, was concerned when all of the horses left and he was by himself in unfamiliar surroundings. After a moment of high-headed, tense worry, he turned to me, the bulging muscles on his neck stopped being so taut, and he asked What should we do now? My answer was: grazing on long green grasses. It’s important to note that I didn’t use the grass as a pacifier. If I had, he would have snatched at it and stayed on alert. Instead, Tonka understood that he had access to it because he had relaxed. Also, because I took the time to do this hand-grazing instead of loading him right up to go home, Tonka had another experience of seeing horses leave him and it turning into a good thing. 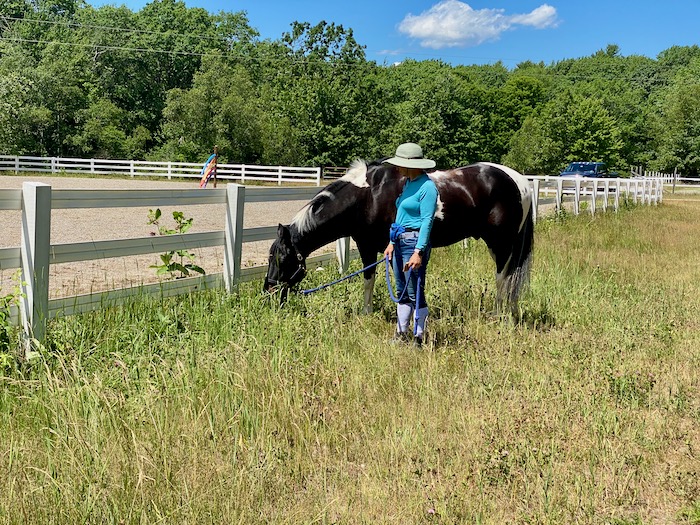 Here we are getting ready to go on a trail ride. We’re parked by a busy road, and I’m fussing with my tracking app. Through it all, although Tonka is alert to his surroundings, he is still paying attention to what I’m doing. You can see by his stance that he is staying sane. This is because he’s learned to trust that a calm demeanor will lead to good things. I was soon ready to ride. Tonka was eager to get going on the trail, but I swung on only after I saw his muscles soften. It was just a second, but enough so that once again, being relaxed led to what he wanted. We had a wonderful ride down a new trail. 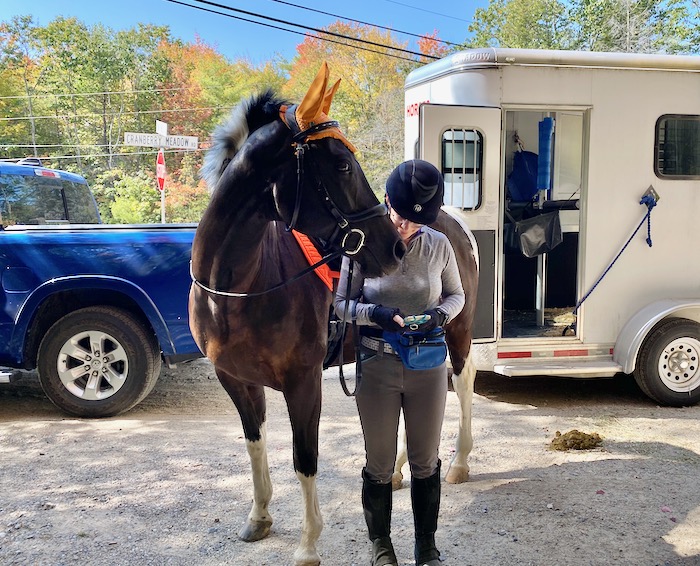 Some of this training is subtle. When Tonka is in his runout and it’s time for a ride, I wait to halter until I see him with that connected relaxed body language: he’s looking at me with a soft eye, he approaches me in a polite way. I don’t halter when he’s distracted or eating and not aware of me. Plenty of rewards happen after the halter is put on (having something interesting to do, getting groomed, being ridden, sometimes a carrot from my pocket) and in this way he learns that good times start when he is in that connected relaxed mental place. How often have you haltered up your horse and brought them in (or simply led them out of their stall) without noticing their mood or facial expression? Each time is a missed opportunity. It takes less than a minute out of your day to say hello and to shape the underlying base of your relationship with your horse. It’ll be worth it! 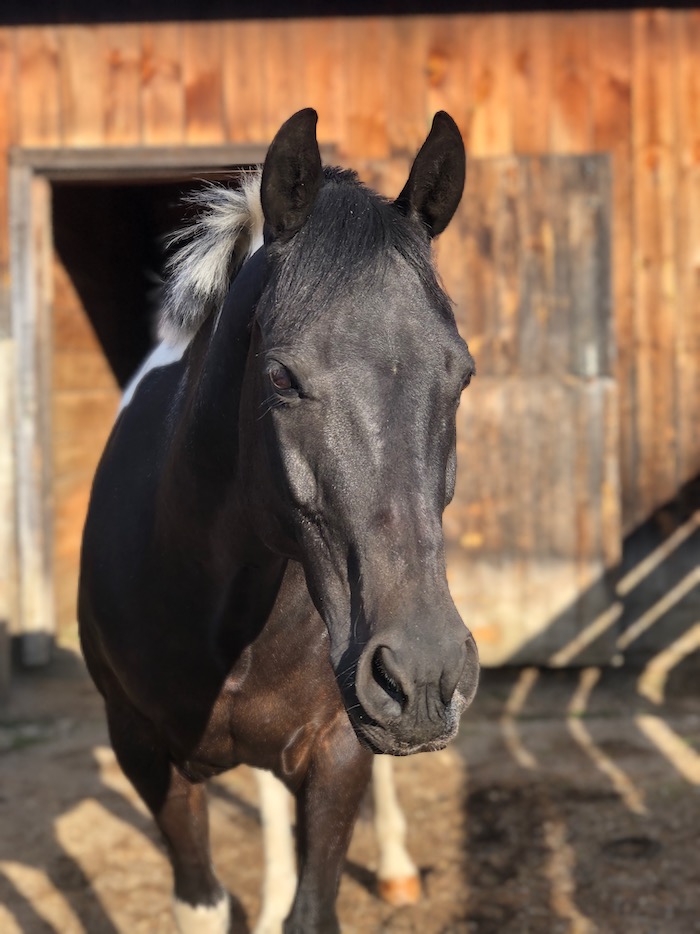 All of this leads to my most recent story. Yesterday the barn was quiet. No other boarders were on the property. I’d finished riding, had dismounted, and was scooping up poop. When I do this, I put Tonka in a stay so that I don’t have to lead him around while carrying a full manure fork. It’s useful to have a horse who will stay put while you do something in the arena, whether it’s to cleanup or set up jumps. Here’s Tonka a few years ago. Tonka’s stay is a solid, long duration behavior.

However, I don’t take it for granted and I’m always thinking about safety. If other horses are in the arena I don’t do this. Yesterday, though, the ring was empty, I was the only boarder on the farm and I knew no-one was around to come in. At least I thought I knew! Tonka was in his stay, I was scooping poop, and suddenly Tonka’s head shot up. I heard a horse trotting fast down the concrete aisle. Around the corner and into the arena appeared a big bay horse! He had spooked as he was being unblanketed by one of the barn staff (damn static!) This could have been a disaster. A snorting, wild-eyed, loose horse could have set Tonka off. Nothing was keeping Tonka from careening around the arena, and possibly getting tangled up in his reins, or maybe galloping around with the other horse, with flying hoofs and hurt bodies. But instead, Tonka looked at me and said What should we do now? I was near enough to say Stand here while that horse gets his wits about him and Kirsten comes to collect him. I took a hold of Tonka’s reins, gave him a cookie, and we watched with interest but without panic as the horse was led back to his stall. Tonka’s sane response wouldn’t have happened without the ongoing training for connected relaxation. It pays off!