Last week Tonka was feeling wonderful. He was going sound and letting me know that he felt good. I blogged about it. Jinx!

I had that fun jumping lesson, and then two great rides over the weekend. Tonka was forward, balanced, doing enthusiastic canter work, and was supple across his back at the trot. Then on Monday, this. Head bobbing lame. Left front.

There was no sign of injury or swelling. Tonka’s digital pulse was a normal, but the hoof did feel a tad warm to the touch.

The ground has been frozen, and Tonka has been playing hard. Perhaps he banged the hoof? That past Wednesday he’d been shod. Perhaps an infection got in through the nail holes? If in doubt, do an epsom salt soak. Those of you who have followed me since my HenCam days know that epsom salts can cure a myriad of ailments in chickens. (See this.) If there was anything brewing in Tonka’s hoof, I wanted to draw it out.

I put Tonka’s hoof in a hot water and epsom salt soak for 20 minutes. He had his shoes and pads on, but it could still work its magic. We did this four times over the course of two days. 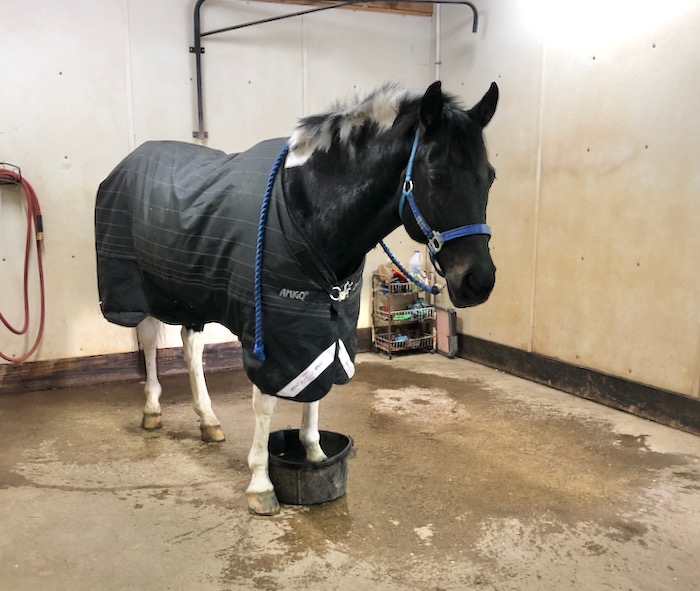 Tonka was feeling sorry for himself. 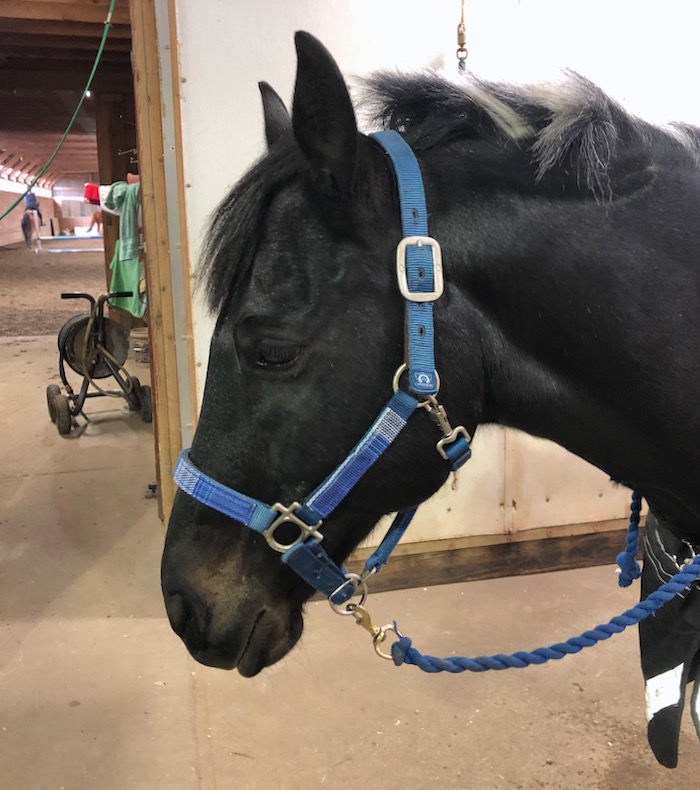 But he was a very good boy. I’ve trained him to stand quietly – wherever we might be. Once in position, he’s not to move an inch. This pays off. I can walk away from Tonka and he stays put. (Note that he is not tied.) 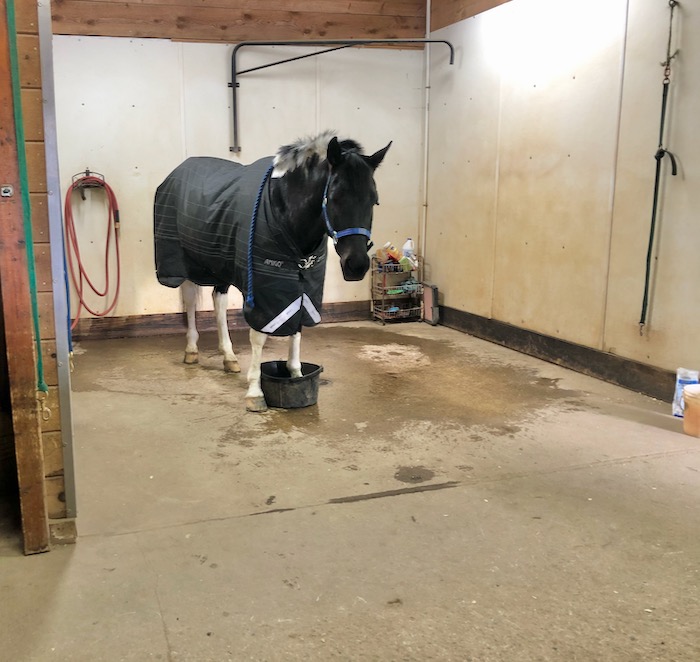 This training is done with a focus on increasing duration while in a relaxed mode.  Tonka is rewarded for being calm and still. I work on this when I don’t need the behavior, when it’s not a big deal if he moves, like when I’m grooming him in the aisle, or standing in the arena, talking to someone. If he moves, I dispassionately reposition. When he is immobile, I tell him what a good boy he is with a kind word, a scratch, sometimes a cookie. Rewards come when he’s not anticipating them – when he is in a relaxed mental place. Tonka believes that a calm mind will bring him good things, which it does. Also, horses love to be in that zen sort of mental state, so it becomes self-reinforcing.

While Tonka stood with his foot in the bucket, I did rub his ears, kept him entertained by playing with his lips (he likes me to tickle him and he licks me) and scratching his mane. Mostly, though, we hung out. Still and quiet. If I noticed him shift his weight, I moved my body so that he shifted back again. Catch them before the weight shift leads to an actual step and you’ll have a very subtle way of keeping your horse from stepping out of the bucket. It means you have to be observant and proactive, but it’s worth it! About 15 minutes in, Tonka started to get restless. I got very still and he responded by relaxing. I gave him a carrot piece. Over the 20 minutes he got only 3 carrot pieces. One carrot when the hoof went into the bucket, that one at 15 minutes, and then a last one when the time was up. At that point I looked for a sleepy face and when I saw it, he got the carrot and I lifted his hoof out of the bucket.  I don’t want Tonka focusing on food and how to prompt me to give him a treat. Not when I’m looking for relaxed immobility from him. I want him to get into that calm zone and stay there. We certainly had the desired demeanor and the duration during each hoof soaking session.

The soaking helped, or maybe it was simply time that did it. He went lame on Monday. On Tuesday Tonka trotted out sound on the lunge in the soft footing of the arena, but was off when trotted by hand down the concrete barn aisle. I rode the following day. Tonka went sound on the straightaways, but there were off steps on the short sides of the arena. Today was the same. Something is not right. Probably that niggling issue in his left front has reared up again. More epsom salt hoof baths won’t be of further help. We’ll be seeing the veterinarian again soon.

In the meanwhile, I’m riding him lightly because the lameness is mild, and riding isn’t making it worse. Movement is essential for a horse’s well-being, and during a winter in Maine, the horses don’t move much outside on the hard and icy ground. Riding indoors is a way to keep going. At least Tonka’s back is still feeling supple and good!