I’m writing this while a nor’easter blows through. Currently there’s a hard, cold rain pelting down. In a few hours it’ll turn into wet, heavy snow. But last weekend it was sunny and 40°F, which is remarkably good weather for southern Maine in the winter. I knew it might be the last chance this year to bring Tonka home to Turtle Hill for a ride, so I hitched up the trailer and off we went.

He was as pleased as I was that we were going to have an outing. Here’s Tonka, calm but ready. 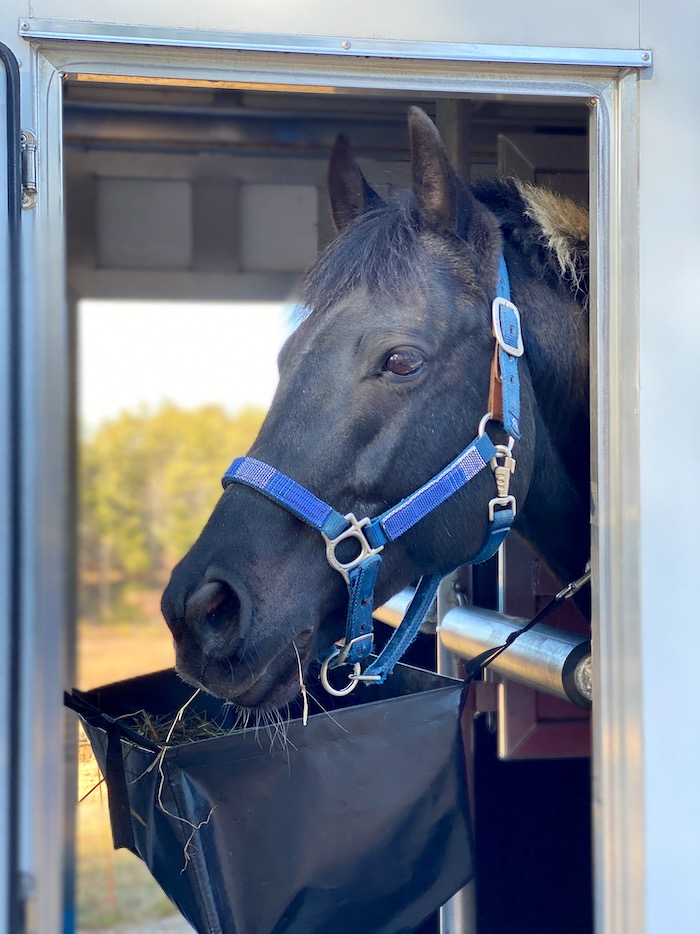 The day started out perfectly. Emma, our neighbor, gave Tonka a piece of apple for sustenance. 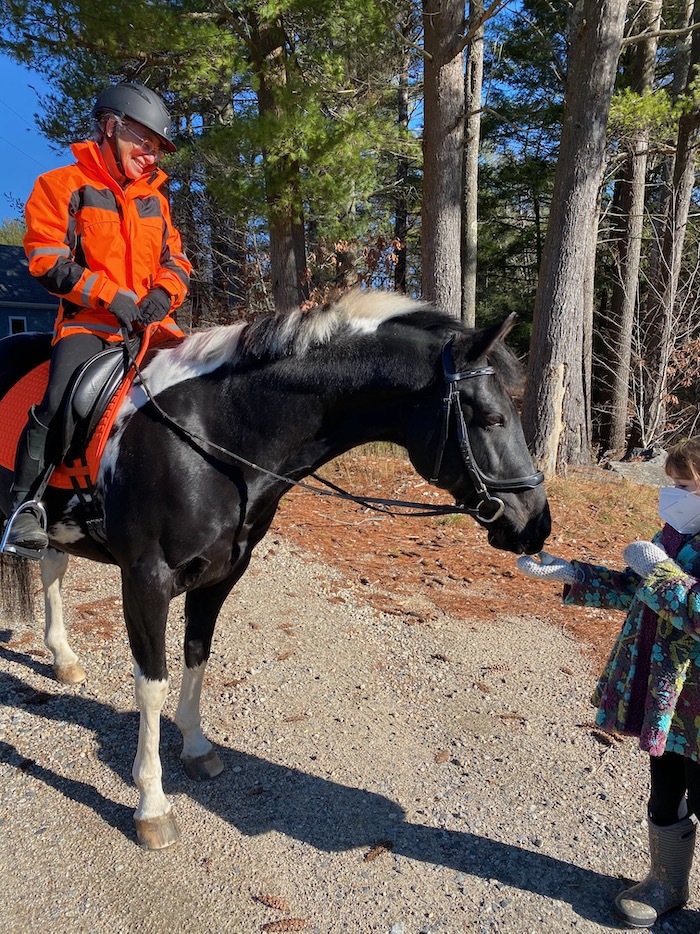 The first half-mile is a logging road. 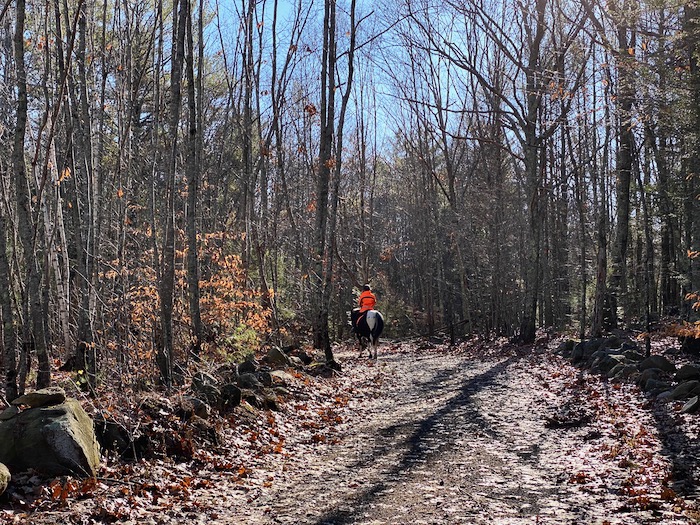 This leads to trails on conservation and water district land. The footing varies, from rocky, to flat, to rutted and muddy sections that ATVs have churned up. It’s rather good going for Maine. 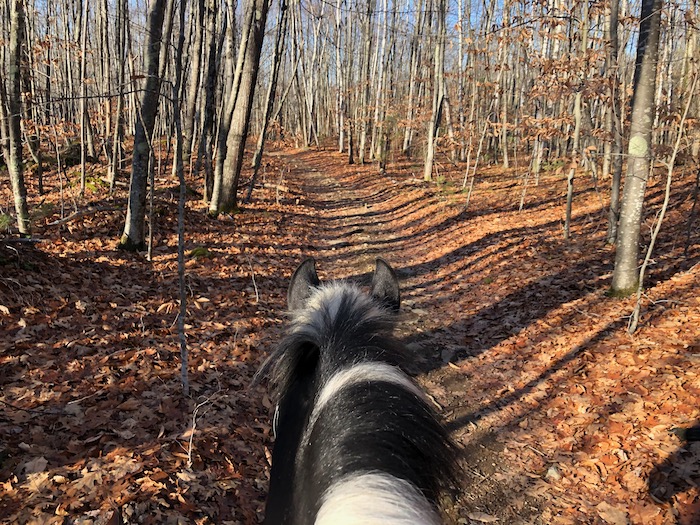 Last March, when the barn was shut down for the pandemic, I hiked miles of these trails and noted which were safe for riding and which I should avoid. There’s a complex web of them, and there’s no signage. One has to explore. There’s one trail with a steep flat rock slope that I’d never ask a horse to do. I walked the side-trails, too, ones that aren’t kept open by ATVs, but that the occasional mountain biker and hiker uses. Those, too, I decided weren’t horse trails. This is all to say that I knew where Tonka and I were going, or so I thought.

One of the wonderful things about living in Maine is that we have four distinct seasons. The landscape changes. Which means that what these trails looked like in March is not the same as what they look like with leaves down and covering the ground. Seeing the trail between Tonka’s ears is not the same as from foot. Anyway…

The trail that I had in mind was a 6 mile loop. I’ve ridden it before with Tonka. For a change of scenery I thought we’d take it to the left instead of the right. After an hour out, I looked for the trail that would circle around for us to get back home. There it was. I checked the mapping app on my phone. Yep, if I went this way, it’s a loop. After ten minutes I had a vague sense that we weren’t on the correct trail. That stonewall reminded me of a different path…

Then the trail narrowed, headed up the rather steep side of hill, and narrowed some more. Tonka and I had to look carefully to see where the trail was. 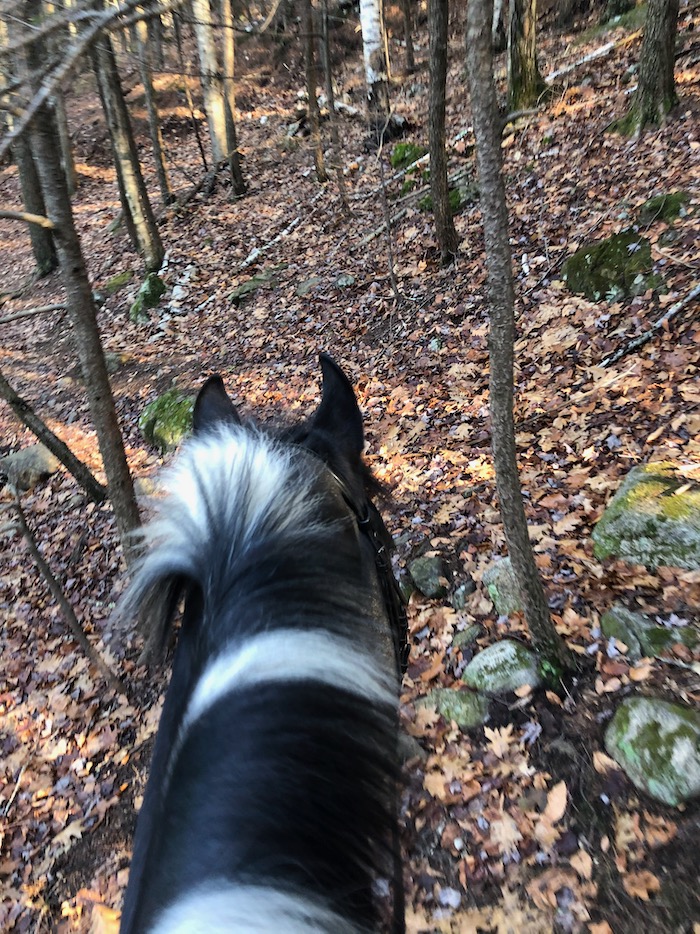 My good horse was game. He wove around the trees and carefully stepped over rocks. One water crossing – a narrow and steep section with a fast-moving stream coursing between rocks – gave Tonka pause. He thought about jumping it and his muscles quivered. I suggested that he walk over instead. I told him that it was safe. He believed me and crossed the stream without freaking out. We were both proud of ourselves.

At this point I knew exactly where I was, and it was exactly where I didn’t want to be – a mountain bike trail. I knew where it led. A water crossing that back in March looked impassable for a horse. The bridge, of course, would be useless on horseback. It’s not even that safe for a hiker! Now, at the end of November, and after a summer’s drought, the water wasn’t so deep. Tonka saw this and didn’t hesitate. Down the bank he went, through the water, and back up the other side. 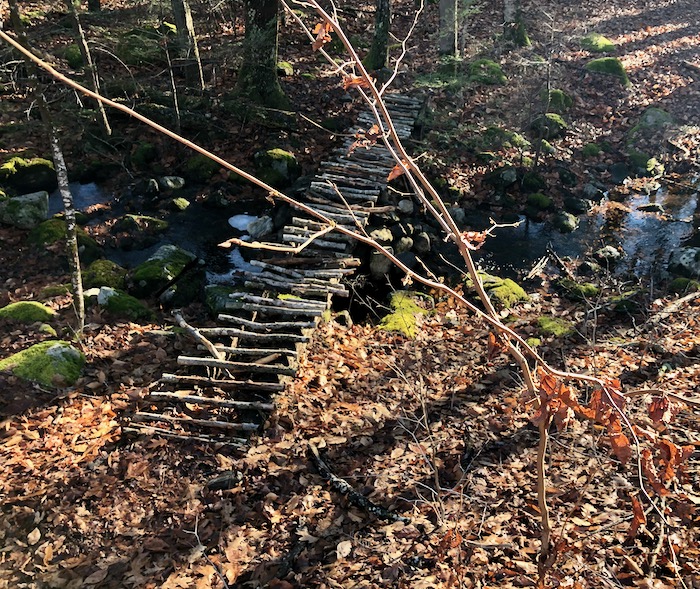 If I had asked him to attempt this at the beginning of our ride, Tonka would have refused. At this point, though, we’d navigated the other obstacles and he knew that he could do it. Tonka was in trail mode, that “let’s see what’s ahead” mindset. Now he was the one giving me confidence!

Further on we picked our way through a windy and rocky path on a hillside that had been logged last winter. Tonka took on the challenge. I could practically feel him puff with pride that he could do this. He also puffed with exertion. We stopped to get our breath. (It’s steeper than it looks in the photo.) 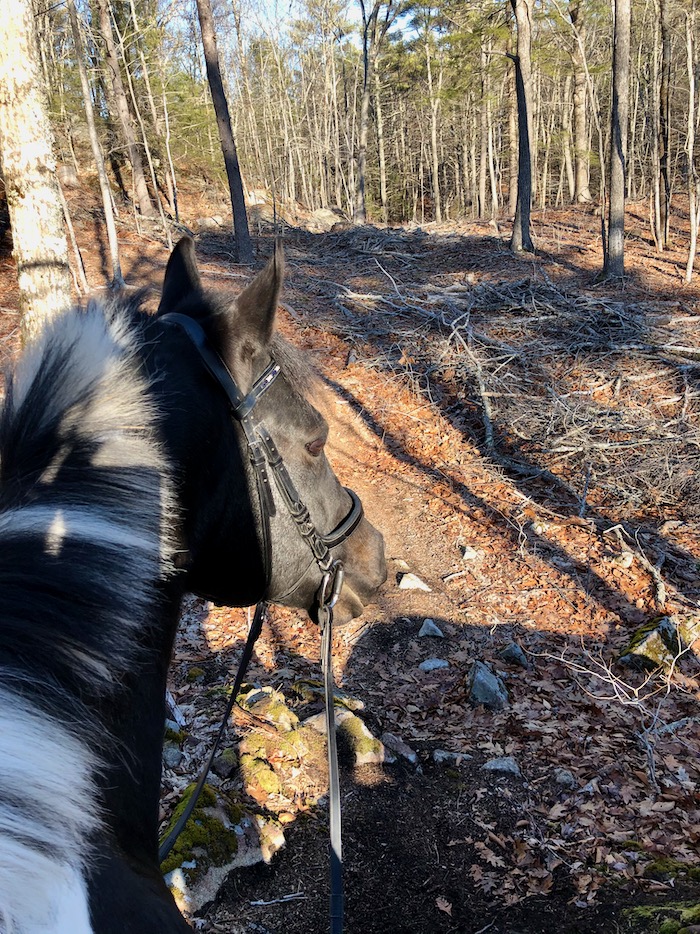 On this day, we met other challenges, too. This ride was the first time on these trails that we came across ATVs. I lucked out. They were coming towards us, not from behind, and I was able to wave at them to stop. They did so, and even turned off their engines. Tonka was very tense. I gave him a peppermint. He looked at them, head high, nostrils flared. I squeezed with my legs and asked him to walk past the two vehicles. He did. I thanked the drivers profusely for stopping and asked that they wait until we were out of sight before turning their engines back on. They did that, too. Tonka, breathing peppermint breath, was calm enough for me to take a photo before we walked on. 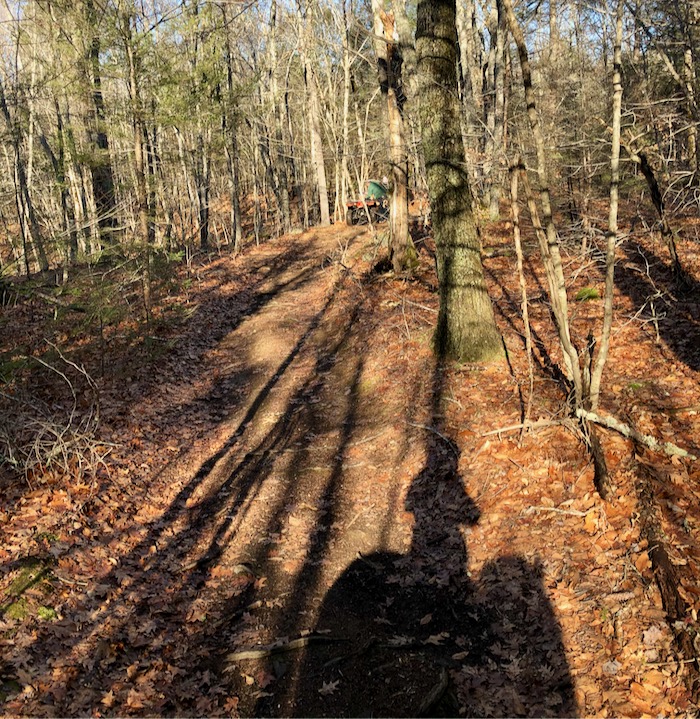 Mountain bikes are scarier for horses than ATVs. They’re quiet and fast and harder to see. On this ride we came across two bicyclists. I’ll write more in another post to discuss trail etiquette with mountain bikers. Suffice it to say that more peppermints were doled out to Tonka. It was another good experience in that he learned that something that looks scary isn’t going to hurt him.

Two hours after heading out, we were back at Turtle Hill. We’d gone 5.5 miles, saw some beautiful scenery, used our muscles, hearts and lungs, and felt rather chuffed about what we accomplished. I’ll try not to take that wrong trail again, but I’m not sorry that we did it this time. Neither is Tonka. 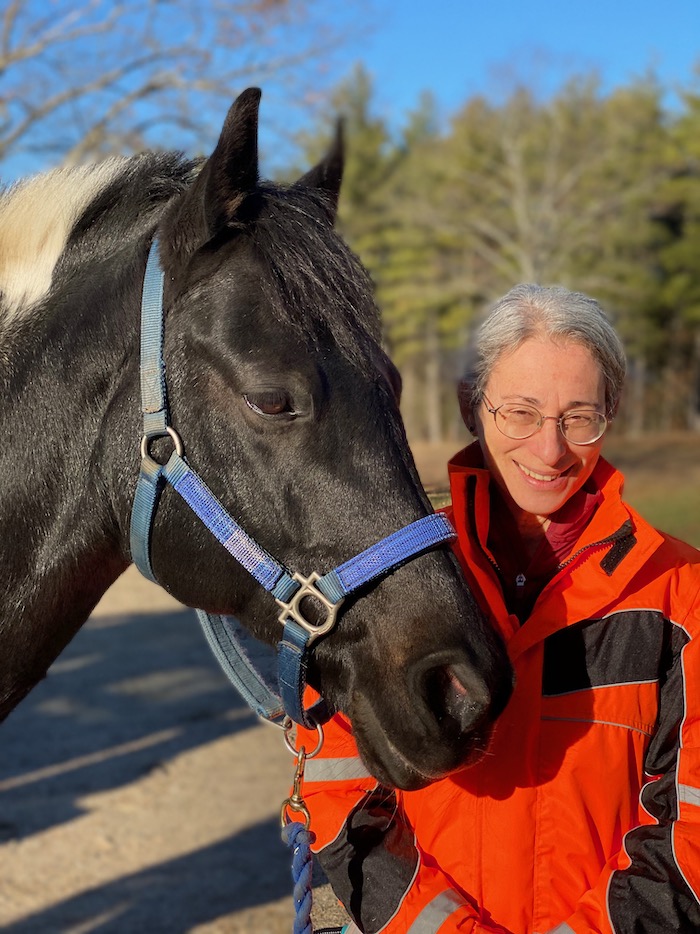 Have you taken a trail less traveled? Tell me about your adventure in the comments!

8 thoughts on “The Trail Less Traveled”