Horses are herd animals, which means they prefer to be in a group of their own kind. Feral horses living on open rangeland organize themselves into a family subset of mares, foals, a few youngsters, and a stallion who keeps them together. There are roving bands of bachelors, angling to get their own harem of mares. That’s the big picture gist of it. But it’s far more complicated than that. A mare might have a loving attachment to one stallion and leave her group to follow him when the dynamics change. Or a stallion will leave his band to try to win back that one mare that is his favorite. Within the group two mares might keep their distance from each other. Others might be lifelong friends. A foal might form a tight friendship with one youngster, but not another. A stallion might take a day to visit bachelor friends. An old horse might live off on his own. Society, whether human or horse, is complicated.

Keeping a horse at a boarding barn, or even in a backyard, is a different world than these free-roaming bands. Our horses rarely have the choice of who to live with. They don’t have the space to keep their distance from horses they’re not fond of. Unlike on the plains, there are set resources to be anxious about and guard, like piles of hay and their grain bucket. Horses still want to be with others of their kind, but it’s complicated.

Tonka started out his life in a filial group of his mom and aunties on a ranch in Texas. His sire lived with them, too. Tonka knows all about herd dynamics,  horse body language, and how to get along with others. As his situation changed, he learned to live in a stall and be turned out. Sometimes with only one horse, sometimes in a small group. Just as people have different personalities, so do horses. Some are gregarious and rowdy, some prefer their own company. Tonka has had horse friends, but he never hung out closely with them, nor did mutual grooming. Tonka does form attachments to other horses, but he prefers them to be peaceable and at a slight distance.

At one point, Tonka was in a boarding situation where resources were scarce and he had to be aggressive to get to his hay and water. That was under my watch. I didn’t realize how bad it was for a few months, but by then the damage was done. By the time I moved barns, Tonka had become intolerant of another horse in his space and near his hay. It was clearly best, for everyone’s safety, that he be kept in solo turnout.

At Greystone, Tonka is calm and content in his own paddock. There is all the grass and hay that he could possibly want. He doesn’t have to guard it. 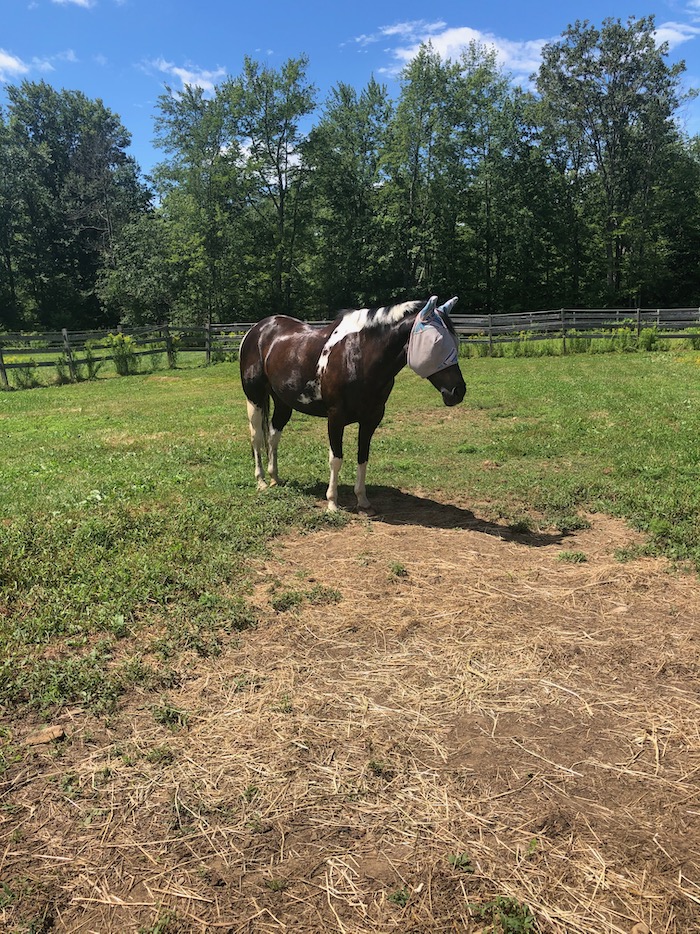 Once in awhile, he says hello to the mares on the far side of his paddock, but mostly he keeps to himself.

Recently something has changed. Edison, an aged gelding, is now in the adjacent paddock. Tonka has never been one for rowdy gelding games or flirtations with mares. What he likes are other calm souls like himself. Edison is one of those.

They have the occasional mouthy gelding interaction. 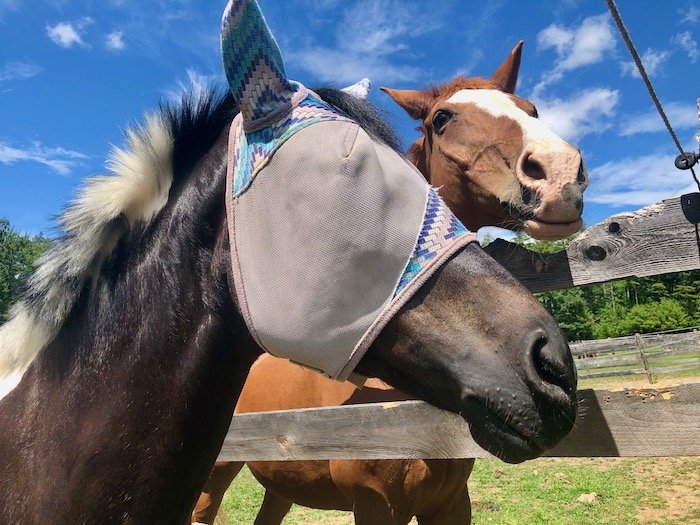 Mostly, though, they choose to stand side-by-side, chilling out. There’s nothing to eat in that corner, but they hang out there, heads down, relaxing. 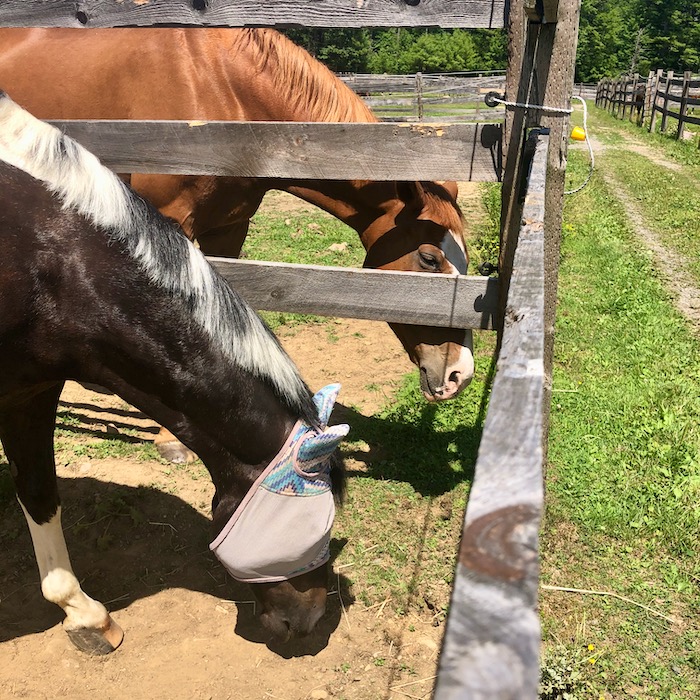 These two form close attachments to their humans. When I came over, Tonka let Edison know that I am his person. Tonka pinned his ears and showed his butt to Edison. It was a loud MINE! It was a good thing that there as a fence between them. Not that this lasted long. If you weren’t looking, you might not have noticed that interaction. As I walked by Edison’s corner, he put his nose out. He knew he was safe from Tonka’s possessiveness and he wanted to say hello. 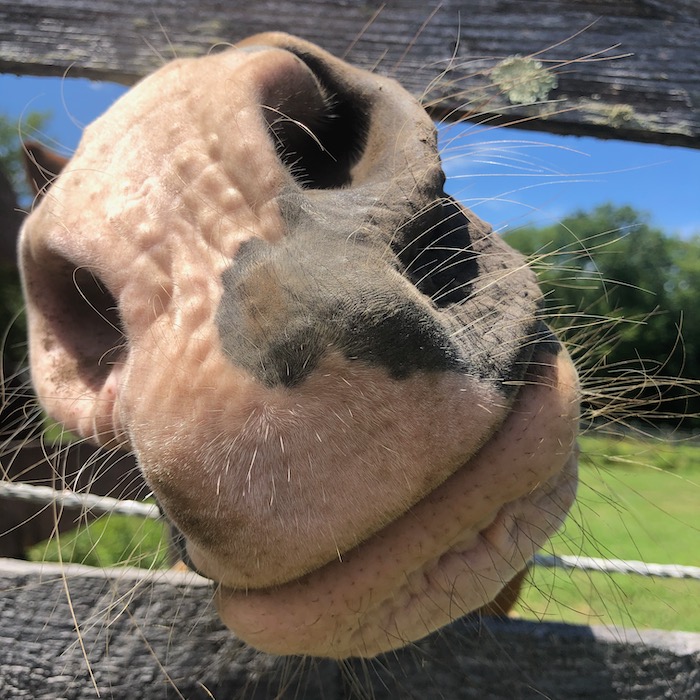 Tonka didn’t make a fuss about that. He understands about fences making good neighbors. 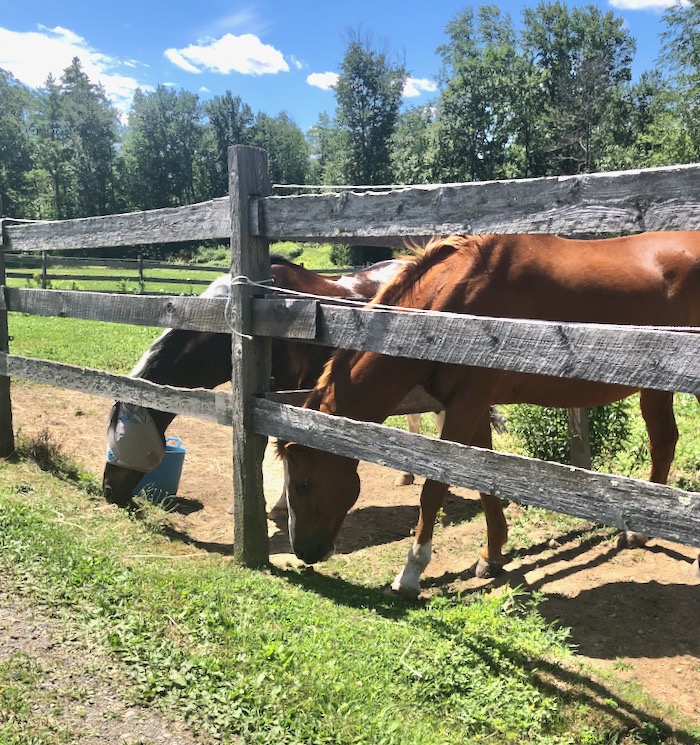 These are the compromises one makes when keeping a horse. Although group life might seem more “natural” that might not be the case for your horse or fit within the parameters of your farm. If horses are kept in a confined space, have feed that is doled out, if they have no choice as to who they’re with, it’s not necessarily better than separate paddocks where they can safely interact with each other if they choose to, but be left alone if they’d prefer that. How do you know if your horse is happy with their living situation? Take the time to observe your horse.

Getting down to roll puts a horse in a vulnerable position. Here’s Tonka, feeling totally safe so that he has no qualms about luxuriating in the dust. When he gets up, look at that satisfied expression. There’s no anxiety about what comes next, either. Another horse could be in the same paddock, next to the mares and Edison, and not behave like this at all. That horse might need a friend to physically be in their space. They might need someone different in the paddock next door. They might need more forage. It’s all about the individual. No farm is 100 percent perfectly setup for every horse, but with observation and a few tweaks, you can make it better suit your own, individual horse.

10 thoughts on “Friends Over the Fence”