In my warmup before last Thursday’s jumping lesson, Tonka was off. Not so obvious on the straightaways, but definitely on the corners.

Determining exactly where the lameness is originating from can be tricky, but this seemed to be a left front issue. In the weeks prior to this, Tonka had occasionally started out stiffly or taken a few uneven steps, but had always worked out of it. Even now, when he was clearly lame, he didn’t seem stressed. It wasn’t an emergency, but it was time for the veterinarian to take a look.

She came out on Monday. First she did a lameness exam. 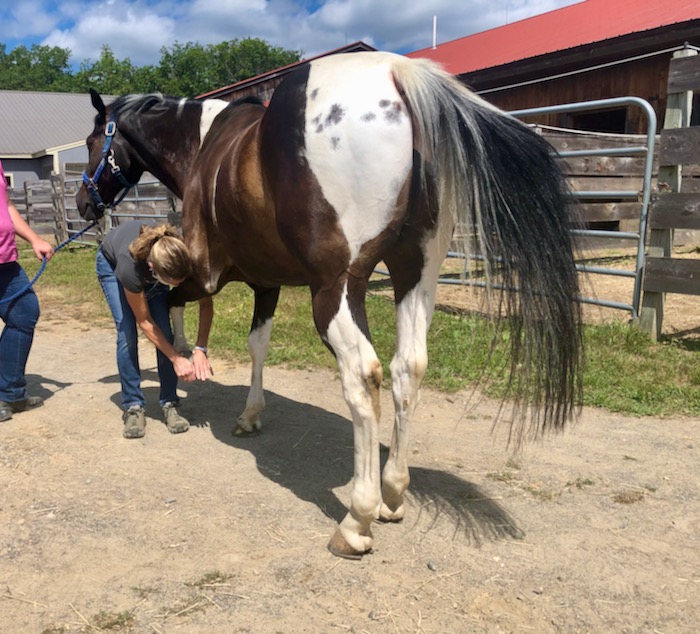 The lameness did originate in his left front. His leg was clean, cool and not at all ouchy. The likely culprit was in the hoof.

A horse’s hoof is an extremely complicated piece of anatomy with multiple bones, joints, ligaments, blood supply and laminae. 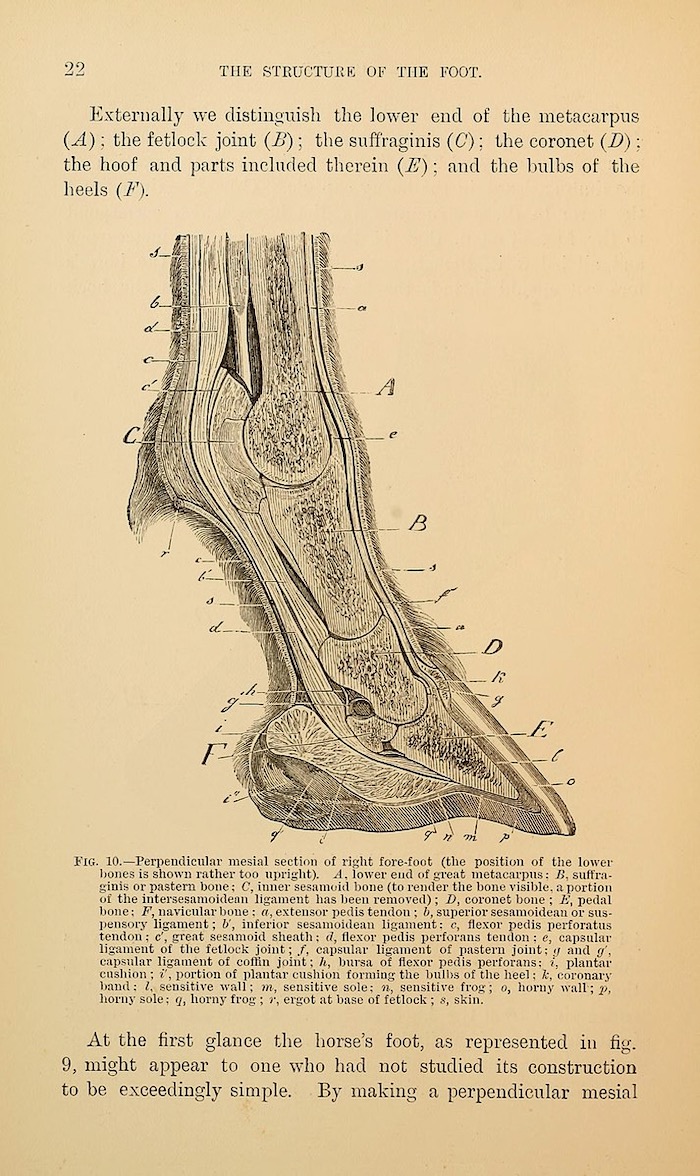 Tonka didn’t have a throbbing pulse, his hoof was the right temperature and there were no obvious external injuries. All good. It indicated that perhaps the issue was arthritis. Or simply soreness. We’re in a drought. The ground, even in the grass paddocks, is rock hard. Add to that the jumping we’ve done, and perhaps Tonka’s joints were achy. Tonka is shod with pads and cushions (he’s always had thin soles) but even that protective shoeing hasn’t been enough to stave off soreness. 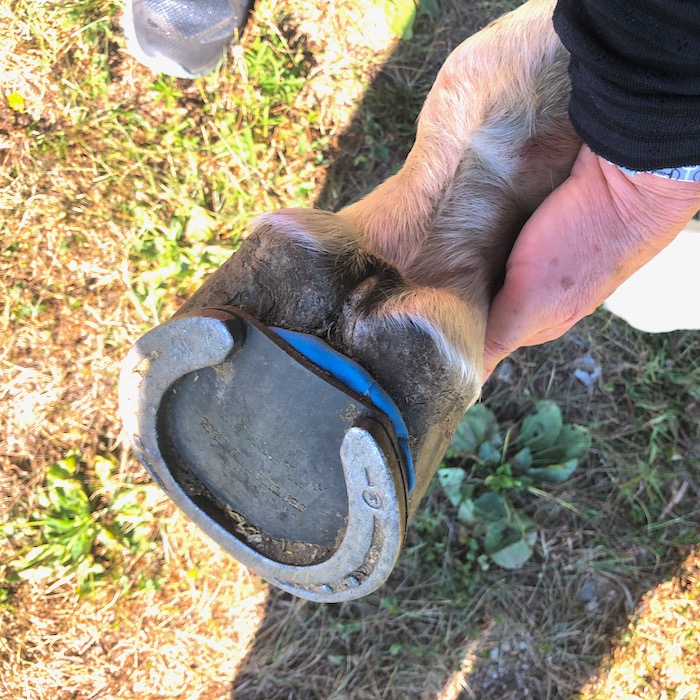 To isolate what part of the hoof was causing him to limp, the bulb of his heel was injected with a drug similar to novocaine. That didn’t mask his lameness. Which was good. Bulb lameness is difficult to remedy. Next the entire hoof was injected, and Tonka trotted out soundly. This pointed to the coffin joint (previously called the pedal bone) as the culprit.  I asked for x-rays to be taken. I like to have a baseline for future reference, and I also wanted to see if there were serious changes happening inside of Tonka’s hoof. His joints and angles looked fine! Other than the thin soles, Tonka has always had nice big, symmetrical, sturdy, healthy hoofs. 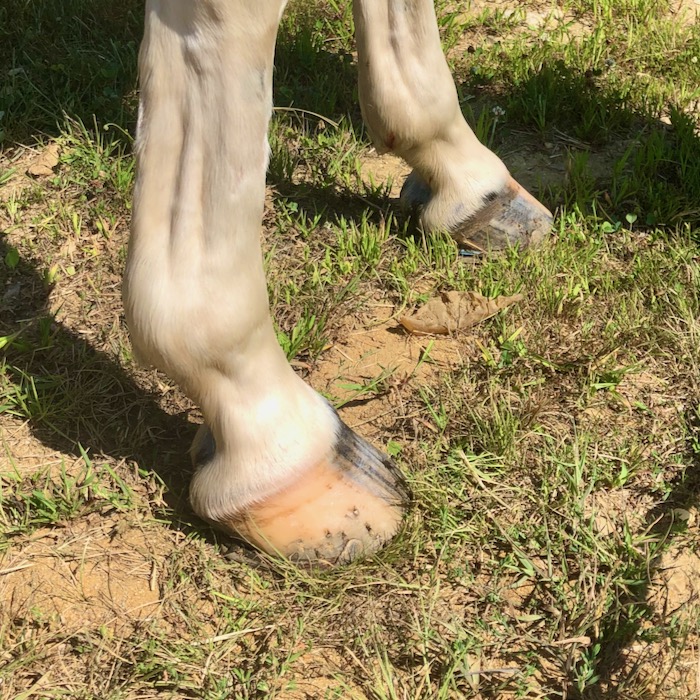 We just had to give what was inside of them a little help. The veterinarian injected both coffin joints with a cocktail of drugs that should add fluids, alleviate inflammation and restore health to the hoof.

For the first 3 days after injection, Tonka has been kept quiet in his stall and run-out pen. I’ve been hand-grazing to keep both of us happy (I need my horse time!) 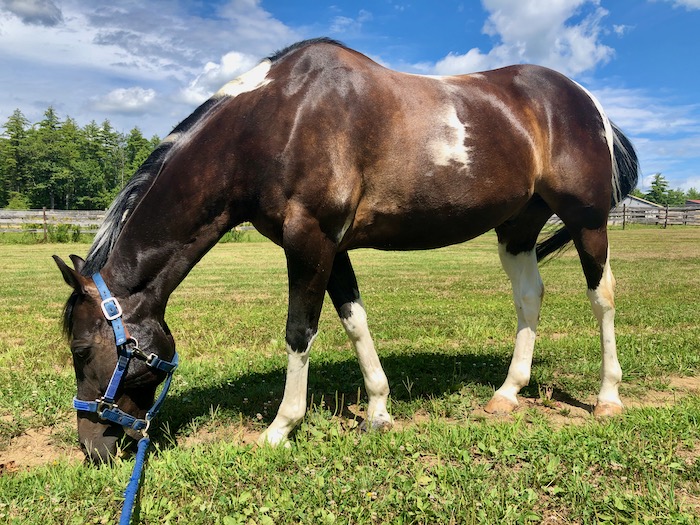 I can get back in the saddle this Friday for a walk, and then, depending on how Tonka is feeling, ease him back into work. Full effect of the injections should be seen in 10 to 14 days. This means I probably will miss the last horse show of the summer, but that’s okay. I’ve been checking out some new trails. Although the drought has been a disaster for farmers, and hard on our horse’s hoofs, it’s opened up some trails that had been too wet for me to access. The other day I hiked out to this. I’ll take Tonka to explore there next week – if he tells me he’s up to it.

(Even in this pretty video, you can see how the ground looks like concrete.)

Have you had your horse’s coffin joints injected? Tell me how that went in the comments!