Two weeks ago Tonka was obviously sore, most notably his left front. I immediately stopped riding and made an appointment with my veterinarian. She deduced that the coffin joints inside of his hoofs was causing pain (read more on this blog) and injected the joints with a cocktail of drugs.

Tonka had three days of rest in his stall and in/out. On the fourth day Tonka returned to his regular big grass paddock. He was also ridden. At the walk. On the fifth day we trotted a bit. Tonka felt better. A week after the injections my farrier watched Tonka go under saddle and said he looked great. Day ten after injections my trainer watched him trot and said we could get back to regular lessons.

Tonka went from this:

I think that Tonka remains at risk of backsliding in this healing. Yesterday was a perfect weather day so I got on in the outside ring. Tonka made it clear with ears back and hesitation that the hard, deep and uneven footing made him unhappy, so we left the ring and tried the grass field. That footing he was fine with! However, end-of-season biting flies sent us into the indoor arena. In there Tonka’s strides were even and he seemed happy to be going under saddle. 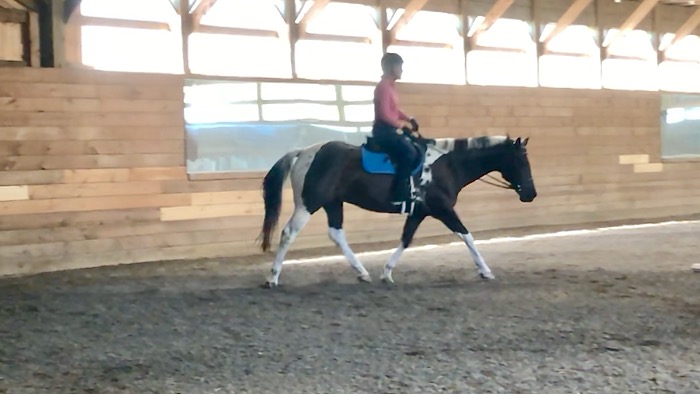 Injections can take up to two weeks to reach their full effect, so there’s still more time before I’ll see how much they benefitted Tonka. We’ll be getting out on the trails (at a walk!) next week. I’m optimistic that we’ll both be happy out there.