Tonka has never been thrilled about walking through water. He doesn’t like mud that sucks at his hooves or slippery rocks. On the other hand, Tonka enjoys getting out on the trail and exploring new places. To do that, sometimes you have to get your hooves wet. Yesterday I rode Tonka further down the trail than we’d been before. I’ve hiked this on foot and I knew we’d get to a running stream. I knew that it would be safe for Tonka to traverse. Tonka, though, didn’t know that. He saw it and stopped. 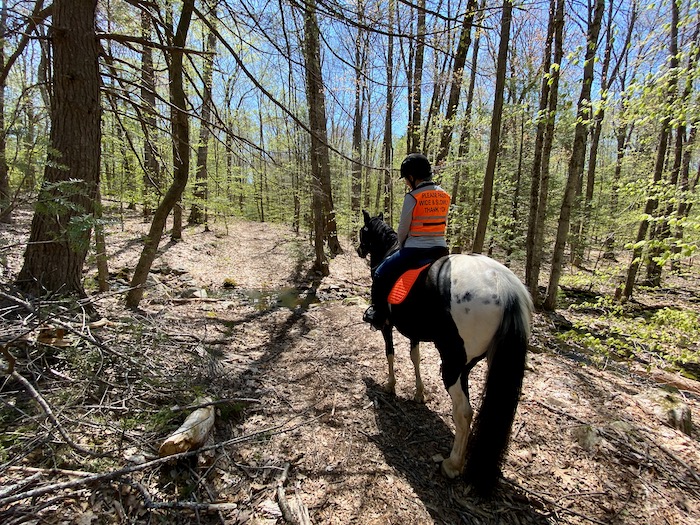 I asked him to walk on by looking ahead and squeezing with my calves. Tonka is trained to move off of my leg. He said no. Instead of going forward from the pressure, he backed up. If I stopped pressing him, he stopped going in reverse, but he refused to get closer to the stream.

I could have insisted that Tonka do as I say. I could have increased the pressure until Tonka surged ahead and over the stream. Doing that might have taught him that he has to go forward no matter what he worries about. Some would say he needs to “respect” me, and if that “respect” has to come with conflict until I win, well so be it. But forcing a horse to walk through a stream does not reduce their concern about water crossings. All it would do would be to convince them that the person on their back is scarier than the water. Maybe with experience the horse would realize that walking through water isn’t going to hurt them, but in the meanwhile, you’re building a history of conflict from a base of fear. My goal is for my horse to be relaxed, willing and bold. You get that when the horse trusts that you’re never going to put him in a dangerous situation that they can’t handle. I have that trust account with Tonka. Sometimes I have to dip into it to get past scary things. This time, though, I didn’t need to take a withdrawal from it by forcing the issue.

Steve had hiked along with us, so I asked him to walk over the stream first. 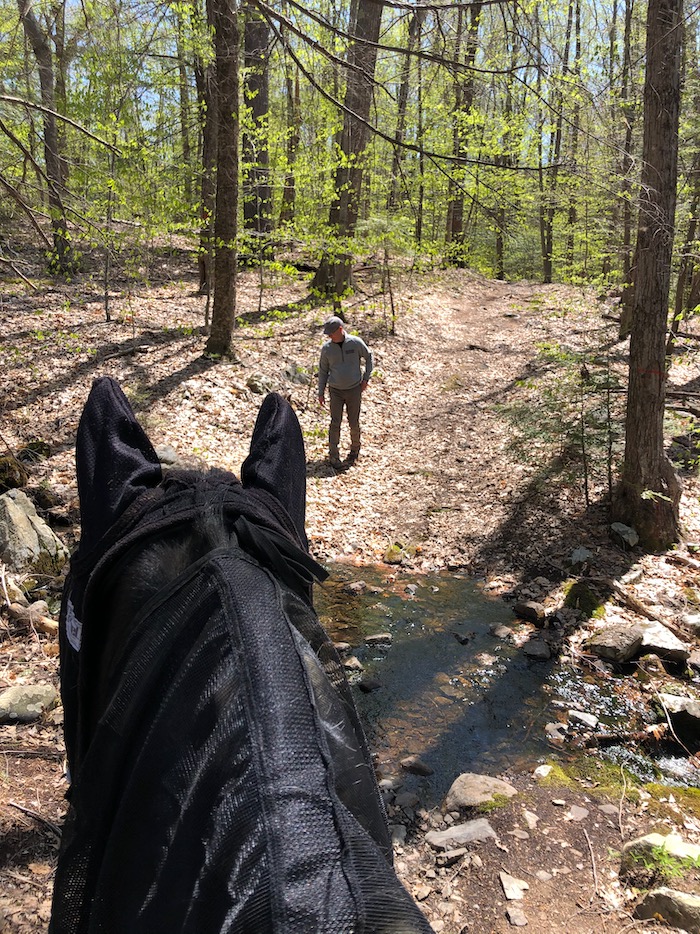 Tonka is smart enough to learn by watching. He was cautious, but after seeing Steve easily traverse the wet rocks Tonka went forward from my leg instead of balking and going backwards. Then he walked right through the stream. This was exactly the response that I wanted! I want my horse to think through problems and take ownership of what he does on the trail. In dressage you control every footfall. On the trail, you want the horse to take care of you. They do that best when they’re calm and thoughtful.

Here’s Tonka about ten minutes later on the way back. I didn’t have to use leg against his sides at all. Tonka understood the task and did it. See how he thinks through the best place to enter the water? I think he had a sense of accomplishment!

Because I didn’t resort to escalating pressure when my horse first balked, Tonka, in just one time through, became confident and capable of crossing a flowing rocky stream. It certainly helped to have Steve there to model calm behavior. If he hadn’t been with me, I would have gotten off and walked Tonka through. (I’ve written about why and when to get off when trail riding in this blogpost.) It usually takes only once. The payoff is a willing and careful trail partner. 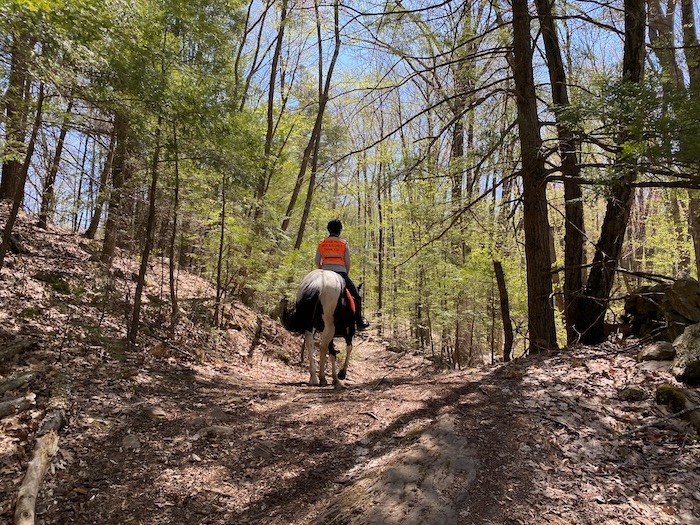 4 thoughts on “Training Water Crossings on the Trail”