Tonka has been going really well. After way too long (a couple of years!) with cascading soundness issues, we’re finally out from the other side of the neck/back/sacroiliac saga. Tonka enters the indoor arena (it’s winter, it’s Maine, we’re in a ring, but at least we’re in the saddle!) with energy and the sort of willing attention that you expect from a horse that’s such an amenable – but never dull – horse on the ground. His warm-up trot is even and big. 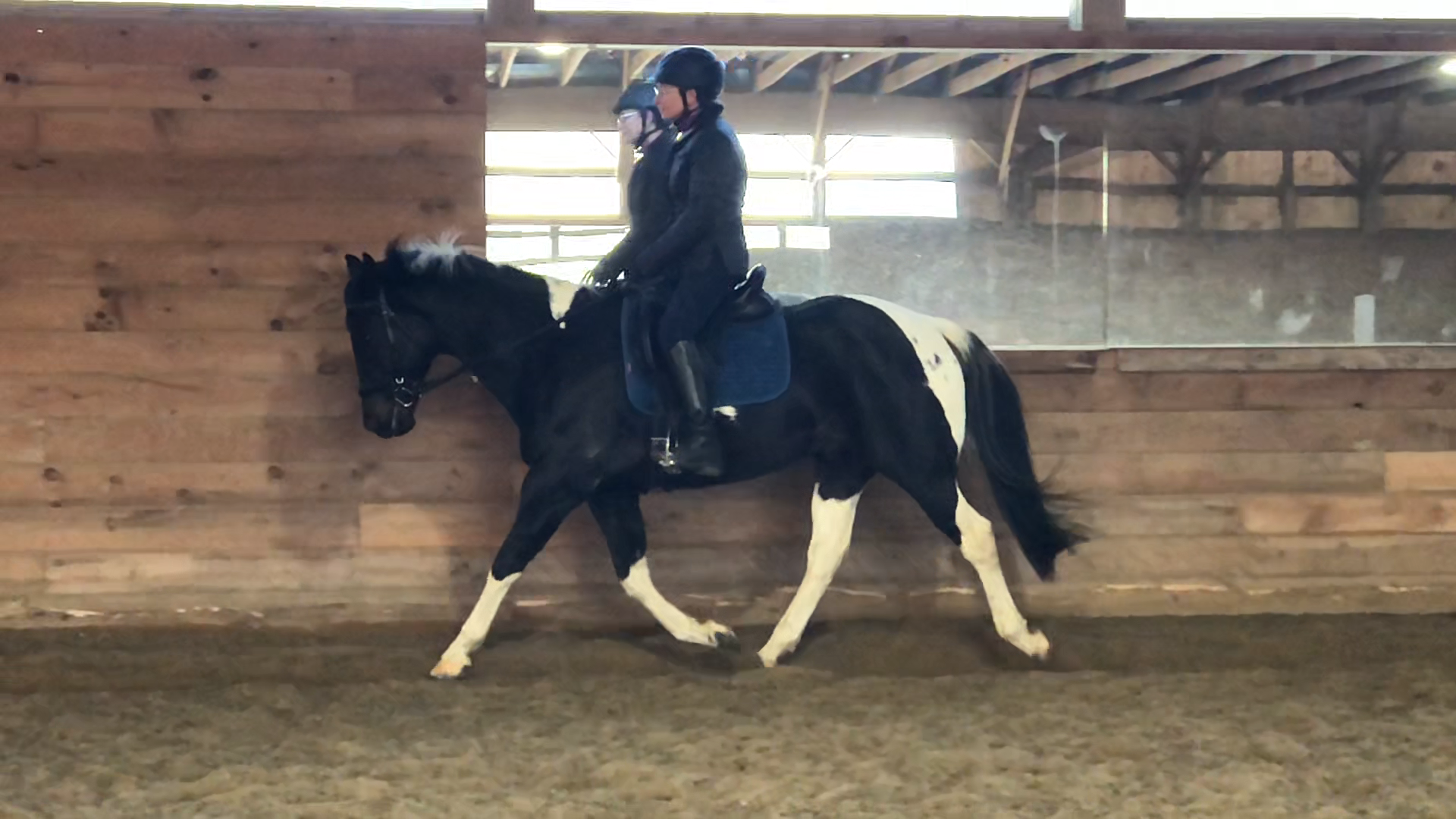 He’s doing canter transitions willingly and smoothly (at the worst of the health saga, he bucked instead of cantering.)

The canter feels stilted to me. Sometimes it’s 4-beat (it should be a clear 3 beat with a moment of suspension before it repeats.) I’d hoped that with the gymnastic exercises we’ve done, and how fit Tonka is (very!), and the fact that his back and stifles are fine, that Tonka would by now be going as rhythmically at the canter as he does at the trot. He’s not.

When cantering, especially to the right, there’s a moment in the sequence of footfalls that the left hind is supposed to carry all of the horse’s weight as it pushes off. It’s that moment that doesn’t feel right to me. I analyzed slo-mo video and saw that Tonka changes the rhythm so that the left hind and right fore are on the ground at the same time.

I’ve known since I purchased Tonka six years ago, that he has mild arthritic changes in his hocks, especially on his left. How he’s going cleverly eases the burden on his slightly compromised hocks. 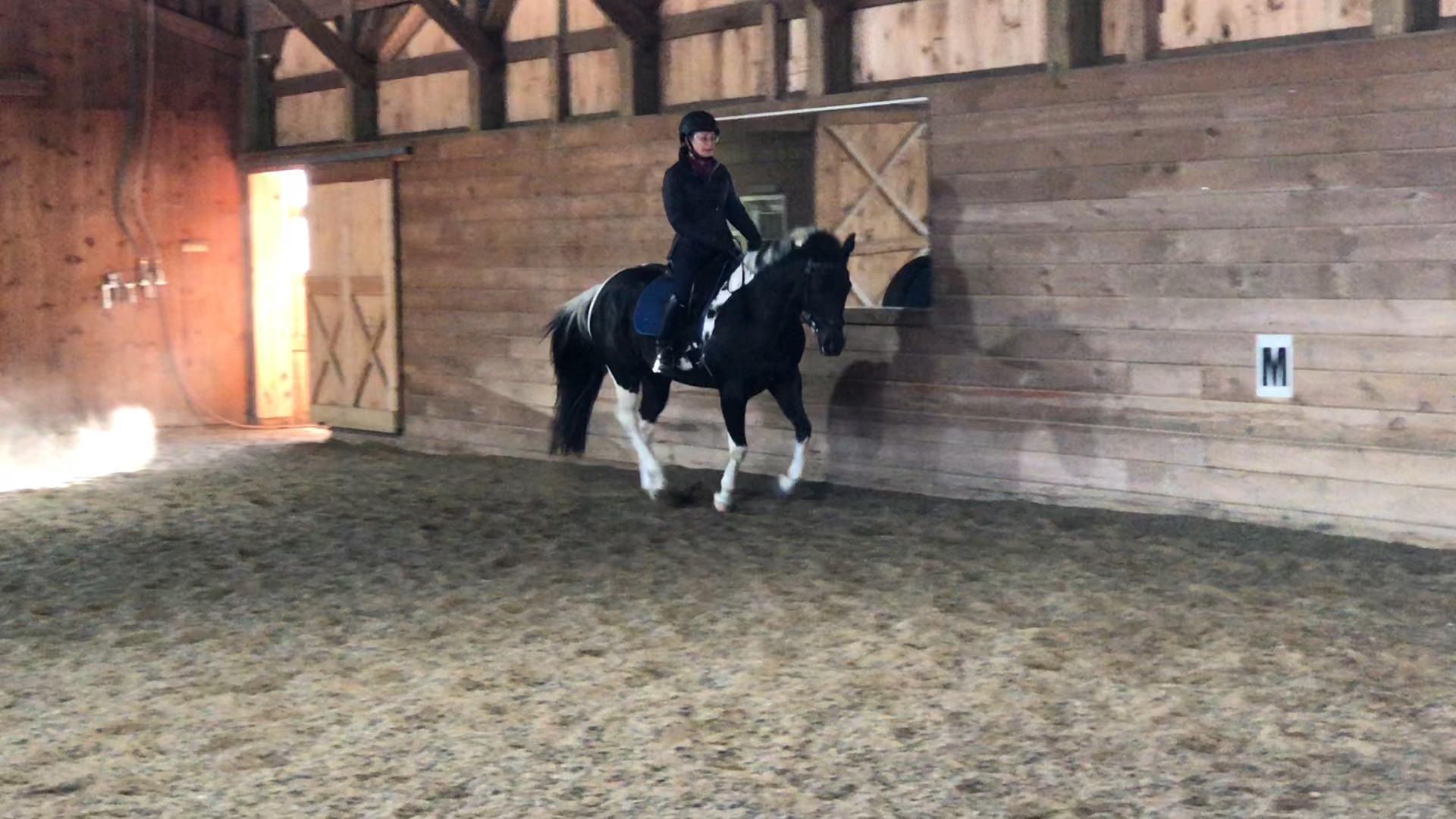 It was time to help him out with modern medicine.

My veterinarian, Monika, boards at my barn and we often ride at the same time. She’s watched Tonka’s gaits and energy improve as his back and neck issues finally subsided. We’ve noticed that he’s feeling great and yet he’s not 100 percent right. Neither of us think that Tonka will further improve on his own. It was time to do injections. Monika uses a combination of drugs that include steroids and lubricants to help those joints.

Today we did a baseline check of his movement. She held the hock up, and then Tonka trotted out immediately after. 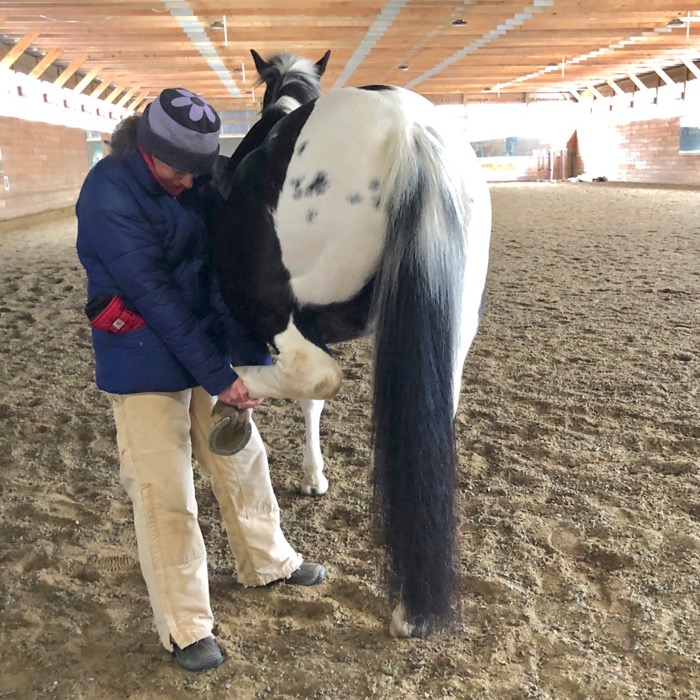 There was a subtle bob to his jog when the left hock was flexed. The right was fine. It was as clear an indication that we have that Tonka labors at the canter because his hock is arthritic. This is very mild! Perhaps another horse wouldn’t revert to a 4-beat canter because of it. My horse is not a stoic fellow. He’s more like the princess and the pea. If there’s something even a tad amiss, he’ll tell me. Politely. But he’ll tell me. There’s not a downside to this treatment (except to my wallet) so we decided to go ahead with the procedure.

Monika loves working with Tonka. He stands still for injections. Even when something hurts he doesn’t lash out at anyone. Still, it was prudent to dose him with a small amount of tranquilizer for these injections. I think he liked it. 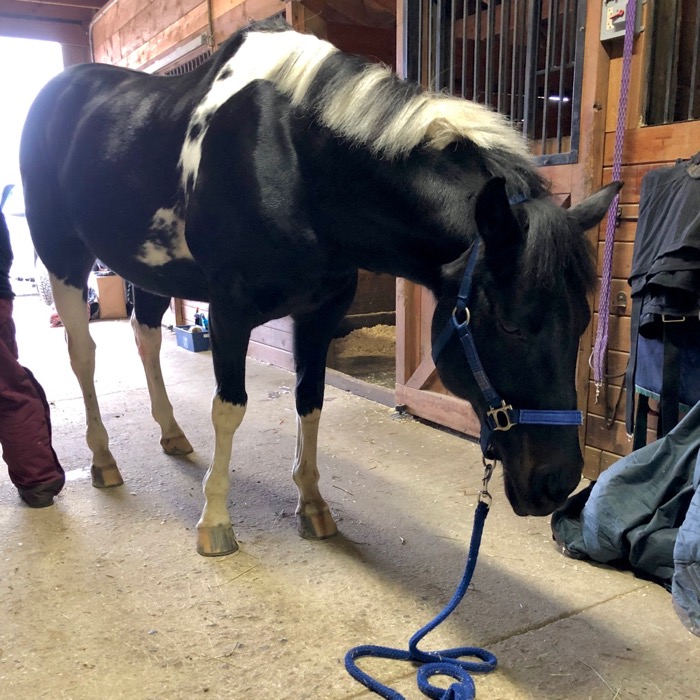 Tonka will have 4 days of rest and then I’ll ease him back into work. I should be able to tell in a few weeks if these drugs make a difference. They might not, but I’m hoping that they do.

Have you had your horse’s hocks injected for arthritic changes in the joints? Was there an improvement?

By the way, speaking of medical care, I am currently reading Placebos for Pets?: The Truth About Alternative Medicine in Animals.. It brings a thoughtful and scientific perspective to the many alternative practices. Highly recommended.

5 thoughts on “Tonka Gets Hock Injections”